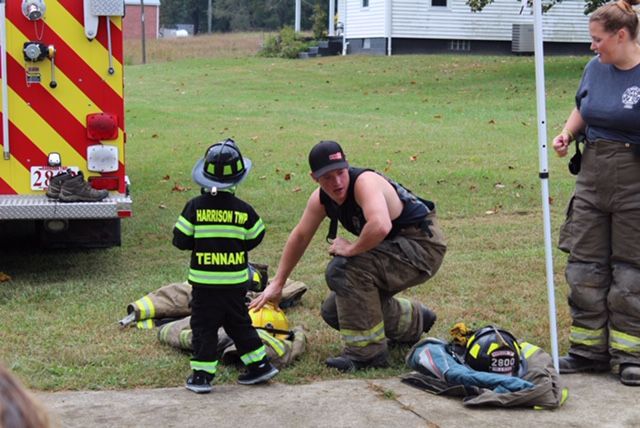 Firefighters show child their equipment at the 2019 Touch a Truck event.

Children tour a MedFlight helicopter during the 2019 Touch a Truck event.

Firefighters show child their equipment at the 2019 Touch a Truck event.

Children tour a MedFlight helicopter during the 2019 Touch a Truck event.

Set to take place at the firehouse located at 53029 Old Rt. 50, Londonderry, Ohio, the event will give children a chance to meet firefighters and see them put on their equipment, said Teresa Cartee, an EMT and secretary at the Harrison Twp. Volunteer Fire Department.

“That way, if they ever have something that would happen, maybe they wouldn’t be as scared of the firefighters after seeing how they get ready and who they are,” Cartee said.

There will be a silent auction, which includes items such as a Glock handgun, a one day Hocking cabin getaway, as well as various crafts. Door prizes include t-shirts, gift certificates and small crafts. Several vendors will attend the event, and food will also be available for purchase.

During the event, firefighters will compete in teams of two in the firefighter water ball challenge, a game in which two teams armed with fire hoses attempt to spray a barrel with a wire running through it to the opposing team’s side.

In addition to the fire trucks, a MedFlight helicopter will be parked at the event for members of the community to tour.

“It’s just something to give back to the kids,” Cartee said. “We try to purchase enough toys that we make sure every child that attends it walks out with something.”

Cartee added that the fire department asks that people wear masks at the event “to try and keep everyone safe and keep the kids safe.”

As of Monday, Sept. 13, Vinton County currently has 120 active cases of COVID-19, according to the Vinton County Health Department. Last year’s Touch a Truck event was canceled due to the pandemic.