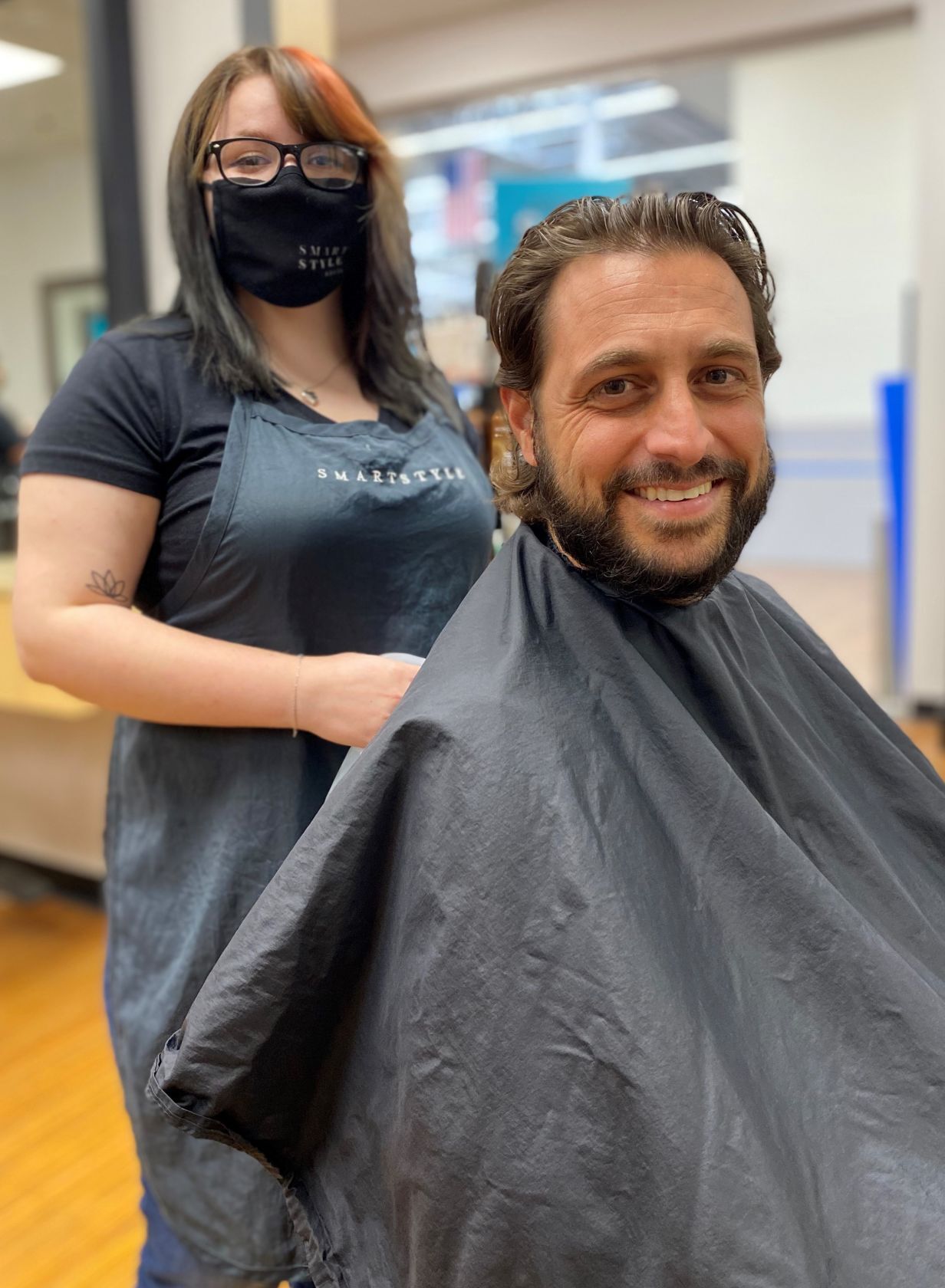 Andrea Snyder, who is the newly promoted manager of Jackson’s Smart Style Salon, is pictured with Jason Stevenson. Stevenson is the majority owner of the salon group. 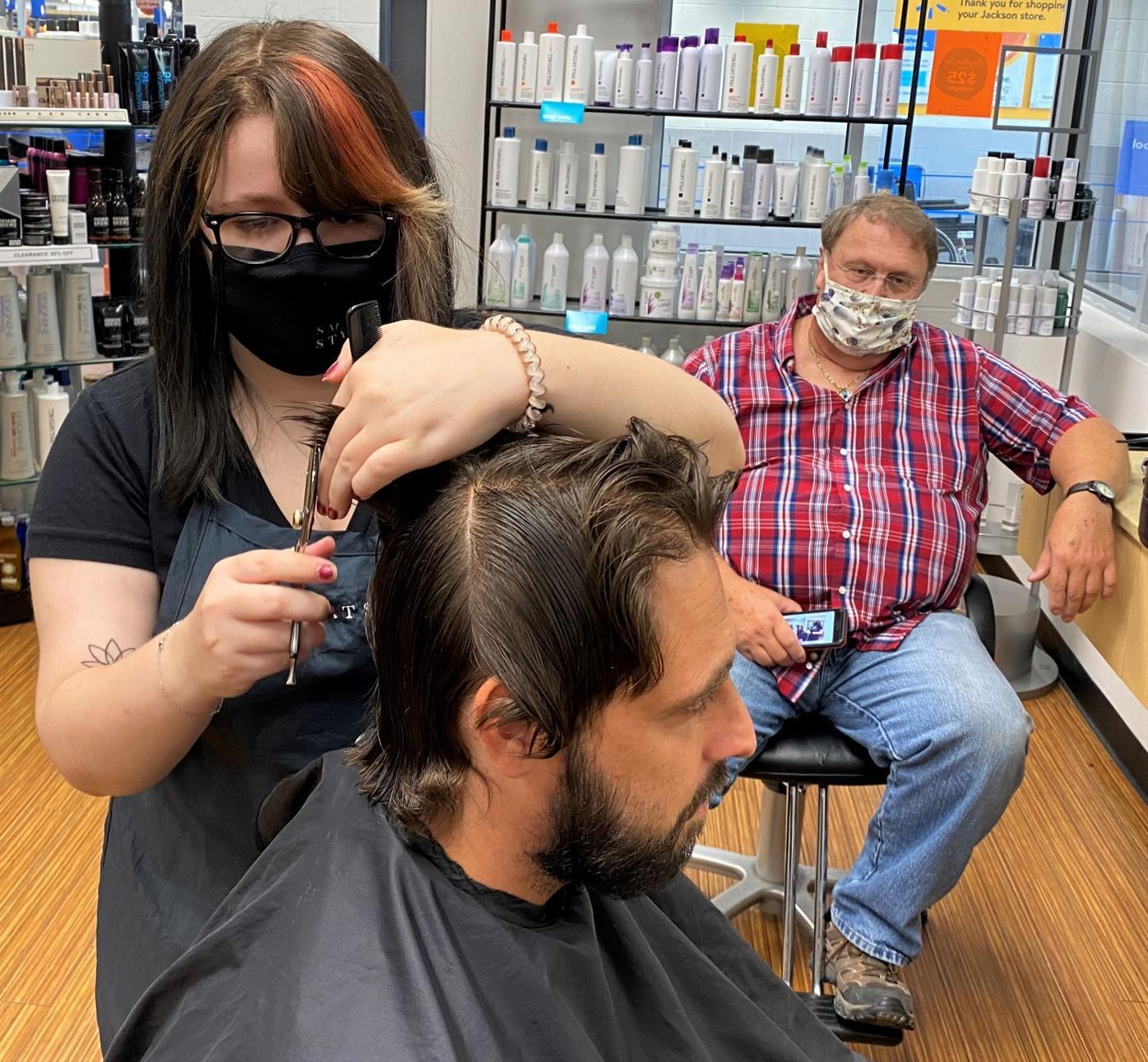 Andrea Snyder, who is the newly promoted manager of Jackson’s Smart Style Salon, is pictured with Jason Stevenson. Stevenson is the majority owner of the salon group.

JACKSON — What started as friendly “teasing” turned into a fun contest for a salon company, that as luck would have it, would bring the owner back to Jackson where his family has roots.

Raeleen Major, director of operations for American Salon Group, told The Courier that the owner, Jason Stevenson, had not gotten a haircut in a while.

Matter of fact, the last time Stevenson had a haircut, was earlier this year before COVID-19 started to have an impact on businesses.

If you recall, Ohio Governor Mike DeWine had ordered in mid-March that all beauty services, such as salons, to close. This was one of Ohio’s attempts to slow the spread of COVID-19.

“We were all making fun of him (Stevenson) on our conference calls,” explained Major. “He (Stevenson) said maybe we should host a contest for one of our salons to cut my hair.”

Major said, “We ended up hosting a contest company-wide, that the salon with the highest number of haircuts that included a style, would get to give him (Stevenson) a makeover.”

It should be noted that Stevenson is the majority owner of the salon group, which includes 91 Smart Style Salons, one of which is located in Jackson.

The winning salon with the highest number of haircuts that included a style ended up being Jackson’s Smart Style Salon, which is located in the Walmart Supercenter.

On Thursday, Sept. 10, Stevenson, along with his father, Tom, visited the Jackson location, where the newly promoted manager, Andrea Snyder, had the honor of cutting Jason’s hair.

While Jason was getting his hair cut, Tom had told The Courier, that the Stevenson family has roots in Jackson County.

Tom grew up in Jackson and was an outstanding athlete and student.

Jason’s grandfather, Art Stevenson, was a math teacher at Jackson High School and started the very first computer programs class there with computers from Radio Shack.

Jason also has two great uncles who live or lived in Jackson. Sam Stevenson, who worked for many years at Eisnaugle Funeral Home, still lives in Jackson with his wife, Kathy, and Steve Stevenson, who was a prominent veterinarian with an office on Mt. Zion Road. Steve has since passed away.

Jason, according to his father, has excelled in the business world. He (Jason) has also many other business ventures aside from the salon group. Jason currently resides in Medina with his wife and three children.

Jackson’s Smart Style Salon is offering a special coupon if you mention that you read this article. If you mention you saw this article, you can get one of the following deals: $1 off a haircut, $5 off a color, or $1 off any retail product.