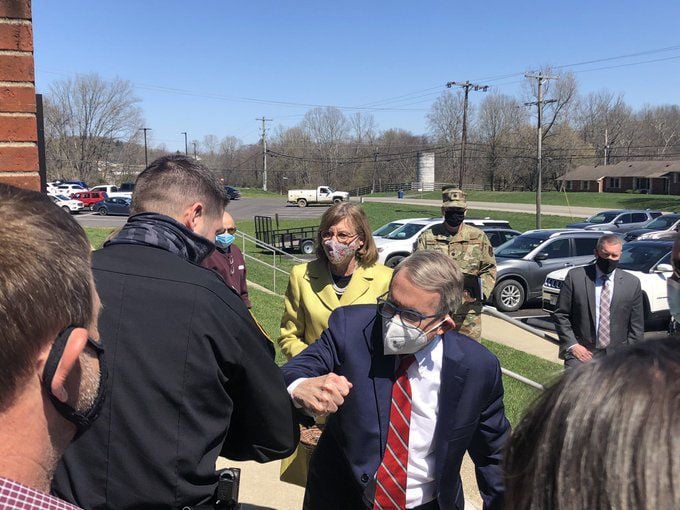 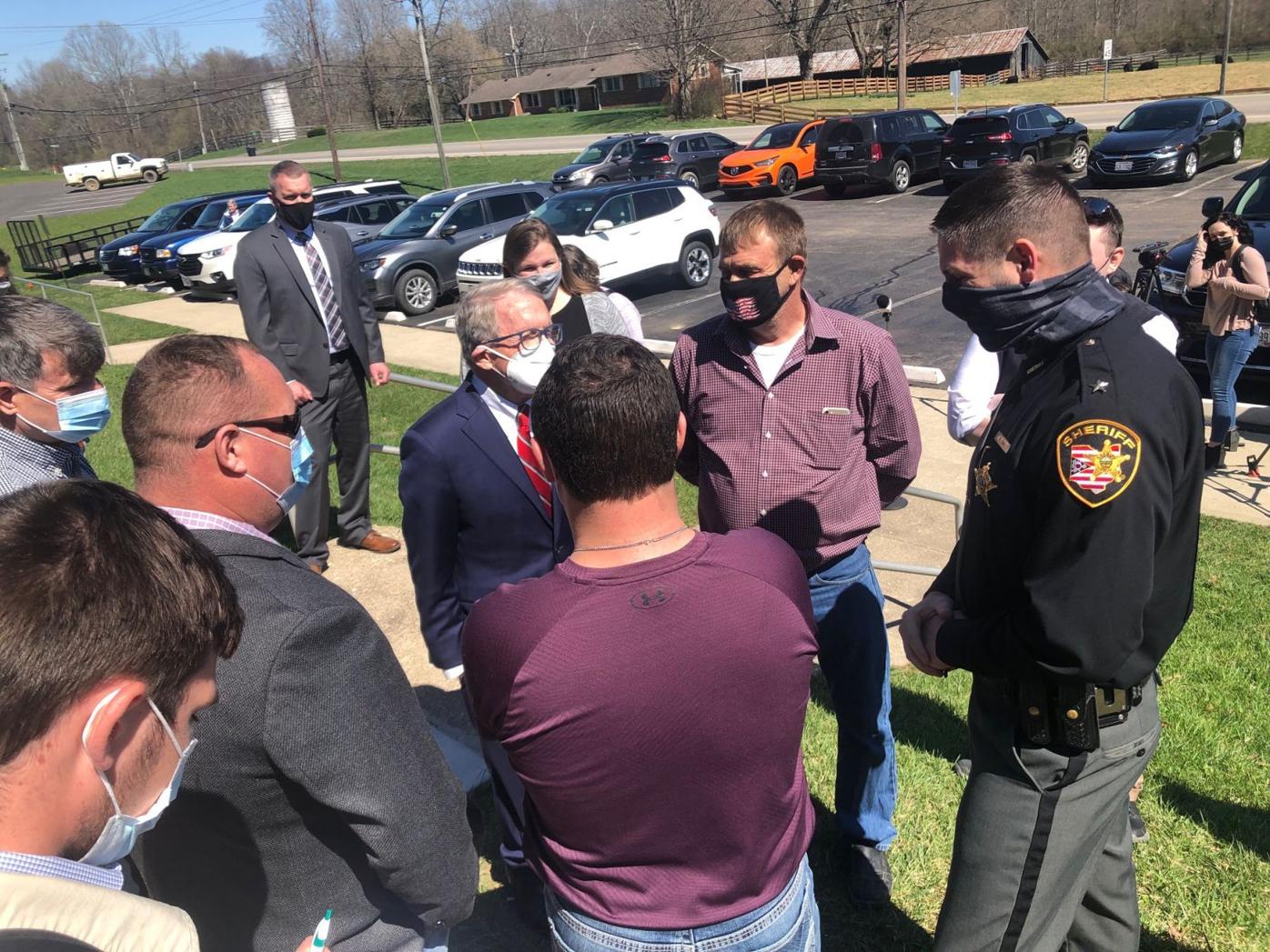 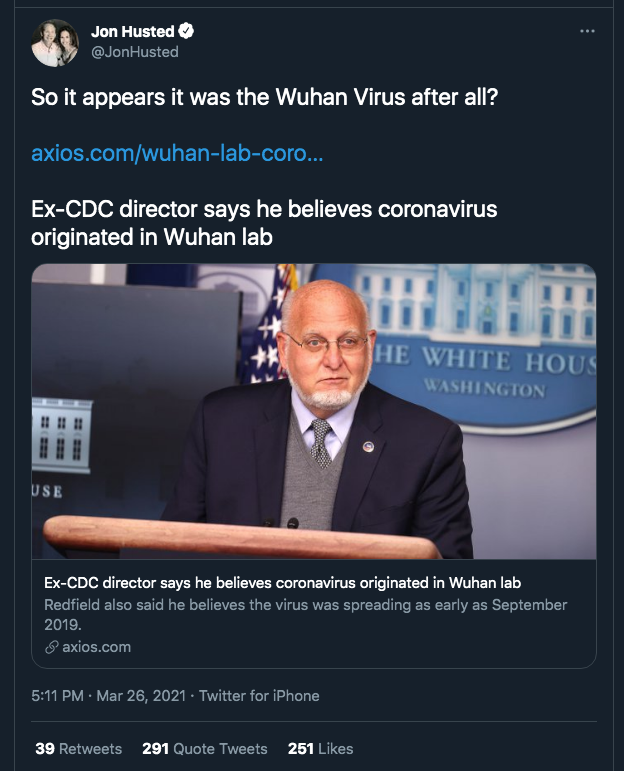 A tweet by Lieutenant Governor of Ohio Jon Husted that some have called out for using “irresponsible” language regarding the labelling of the COVID-19 virus.

A tweet by Lieutenant Governor of Ohio Jon Husted that some have called out for using “irresponsible” language regarding the labelling of the COVID-19 virus.

Vinton County became the 18th county in the state to be visited by the governor in his efforts to encourage Ohioans to get vaccinated.

VCHD welcomed the governor as he made his third appearance of the day, having previously met with residents of Monroe County and Morgan County at their local health departments.

“My message today is very simple,” DeWine said. “We’re in a race and the way we win the race is for more Ohioans to get vaccinated.”

Gov. DeWine spoke with county health officials about the progress of the vaccine rollout in Vinton County.

VCHD Health Administrator Janelle McManis said that the health department has been receiving 100 to 120 doses a week and are giving out approximately 40 vaccines a day. Despite concerns of a slowdown in vaccine willingness, McManis explained that they only have just started seeing open spots for vaccinations. The department previously had a more than 700 person waiting list for the vaccine, but has since gone through that list.

The biggest challenge has been spacing, according to McManis. The possibility of a drive-thru vaccine clinic is there if a need becomes apparent. Openings are available on March 30.

When asked about vaccine allocation for more rural areas, the governor explained that this is considered each week in order to allocate the correct number of vaccines. The state is informed on Tuesday of each week how many doses they will be receiving and from there allocation within the state is determined.

Gov. DeWine emphasized the need for younger Ohioans to get vaccinated in order to keep those around them safe. As a group that is less harshly impacted physically while also spreading the virus, it is imperative that more young adults get their vaccines.

“Even if someone 25 years of age is not worried about getting the COVID, they get vaccinated and they may help their grandmother or help their aunt or help someone else,” DeWine explained.

A discussion about the plan for vaccinating college students took place between the governor and Ohio university presidents on Friday. Further details on the next steps are set to be included in the March 30 press conference.

For Ohioans aged 16 and 17, Pfizer is the only option for vaccination and can pose issues due to the temperature control needed for that vaccine. When asked about the avenues for those Ohioans who have parents that might not be willing to allow them to get vaccinated, Gov. DeWine encouraged parents to get their kids vaccinated stating it was “very important” and that he urges people to do so.

Last week, Lieutenant Governor Jon Husted tweeted out an article from Axios concerning the former CDC directors belief that the virus originated in a Wuhan laboratory, stating “So it appears it was the Wuhan Virus after all?”

Reporters asked the governor for his thoughts on the matter. DeWine responded by saying he knows the Lt. Governor very well and that “there is not any prejudice or discrimination in his head at all.”

The governor pointed out the Chinese governments past bad behavior concerning open communication and transparency.

“We can still be critical of the government of China without being prejudiced against anyone,” DeWine said.

Upon further questioning regarding whether using that specific language was irresponsible, Gov. DeWine stated that wasn’t what was meant and that reporters will get the chance to ask the Lt. Governor themselves tomorrow at the press conference.

Both Fran and Mike DeWine congratulated the Lady Vikings Basketball team on their run to state finals, calling it “a great accomplishment” and “very exciting.”

Vinton County Commissioner Mark Fout asked about when the mask mandates for Ohio will be lifted, to which the governor responded that the state will continue to follow the guidelines set by medical experts. He cited the lack of spread in schools due to students and teachers masking up as proof that masking works.

County commissioners spoke more personally with the governor after the press conference ended, with discussions turning to the issue of clean drinking water availability. Commissioner Fout stated that the issue is “a lot worse than people think.”

Over 120 homes on Garrett Ridge don’t have access to clean water and have sent photos of undrinkable water to commissioners in the past. The main issue to getting clean water to the area is due to a lack of available funds.

The governor noted that the state does want to help and will be back in touch.