Jackson County Commissioners Jon Hensler and Donnie Willis, are pictured among individuals, who support raising community awareness on child abuse and neglect prevention. The commissioners adopted a proclamation for the month of April. 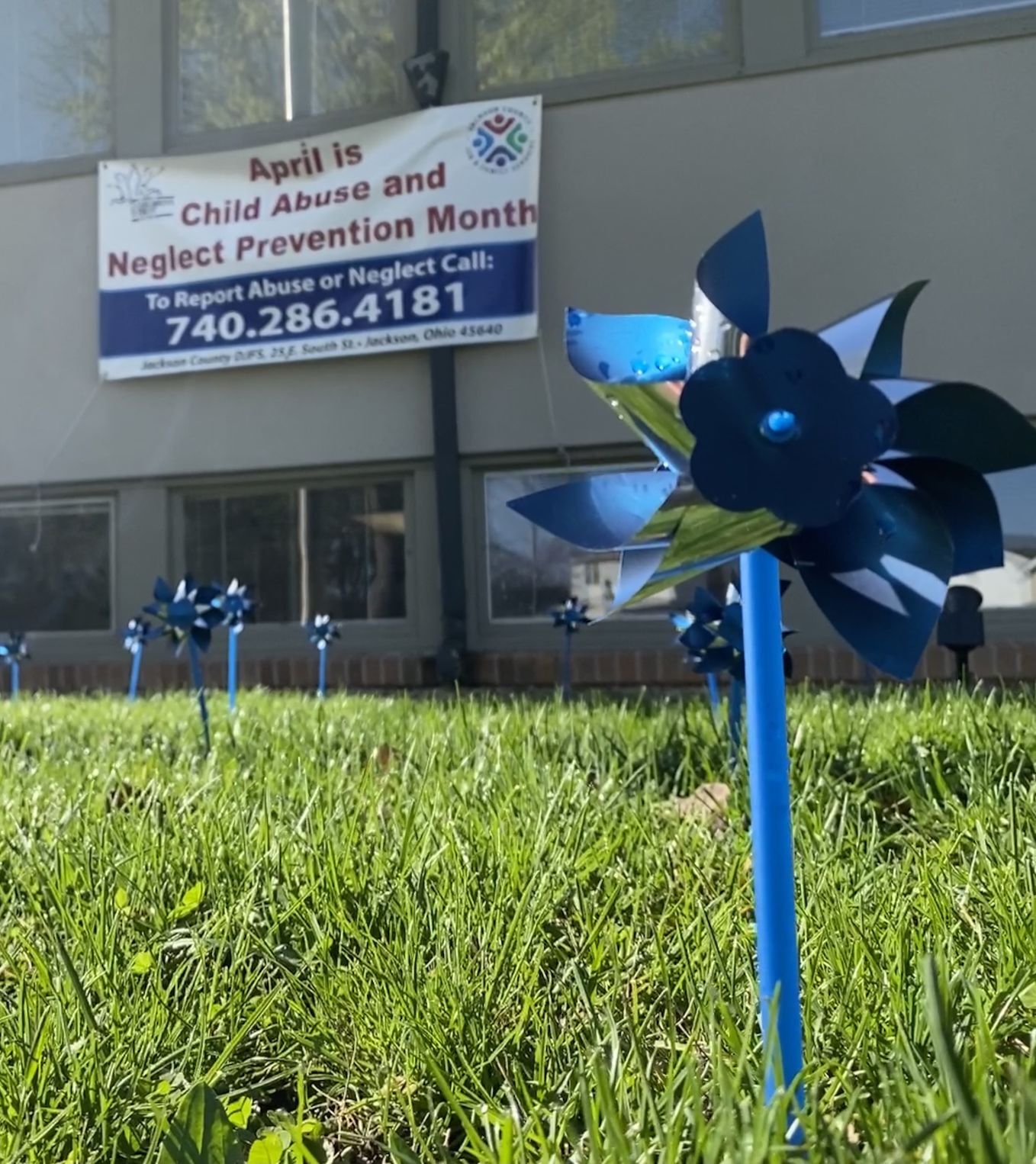 Pictured are some of the pinwheels that are planted outside of the Jackson County Department of Job and Family Services building on South Street in Jackson.

Jackson County Commissioners Jon Hensler and Donnie Willis, are pictured among individuals, who support raising community awareness on child abuse and neglect prevention. The commissioners adopted a proclamation for the month of April.

Pictured are some of the pinwheels that are planted outside of the Jackson County Department of Job and Family Services building on South Street in Jackson.

JACKSON — It’s April, so it’s time to remind the community once more, that they are the “key” to preventing child abuse and neglect. The age-old statement, “if you see something, say something” applies here too.

Ohioans, who suspect child abuse or neglect, only need to remember one phone number. The Ohio Department of Job and Family Services has an automated telephone directory that will link callers directly to a child welfare or law enforcement office in their county. That phone number is 855-642-4453. Reports can be anonymous.

Normally, during April, employees with the Jackson County Department of Job and Family Services (JCJFS) are joined by the community to plant pinwheels around Jackson County. The pinwheels help bring attention to the subject of community awareness about child abuse and neglect prevention.

“To continue promoting social distancing, our team is planting pinwheels at the office,” explained JCJFS Director Tammy Osborne-Smith. “However, we will be asking businesses and teachers (and students) to decorate their doors or windows or wear blue to help promote the awareness campaign this year.”

Despite not being able to gather with the community, the Jackson County Board of Commissioners adopted resolution 73-21, which designated April 2021 as “Child Abuse Prevention Month” in Jackson County.

“Every child has the right to grow up in a safe and nurturing environment, stated Jackson County Commissioner Vice President Jon Hensler. “Too many of Ohio’s children are abused and neglected. The consequences of child abuse and neglect cost Ohio billions of dollars each year.”

The Jackson County Board of Commissioners urges all county residents to take action to prevent child abuse and neglect. Since 1983, April has been designated as Child Abuse Prevention Month in the United States.

“When planning for the future of our towns and cities, our communities should be focusing on the success, safety, and well-being of the next generation,” stated Osborne-Smith. “We say it all of the time, our children are our future.”

Osborne-Smith said, “With that in mind, child protection is an essential component to every facet of society. Children need and deserve to live in a community where communities embrace a framework of protective factors that contribute to child protection.”

Child abuse is preventable, citizens can bring awareness to the topic by wearing blue to work on Wednesday, April 14. Take a picture of yourself, group, or company wearing blue and post it on Facebook.