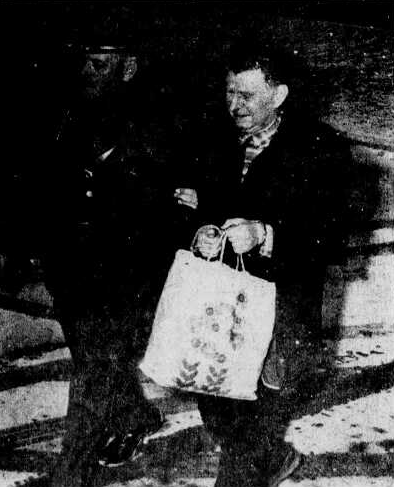 Oliver Mills, 61, of Creola, is shown as he was returned to Pickaway County jail after the Vinton County jury had found him guilty of first-degree manslaughter in the Aug. 31 shotgun slaying of Vinton County Sheriff Harold Steele. 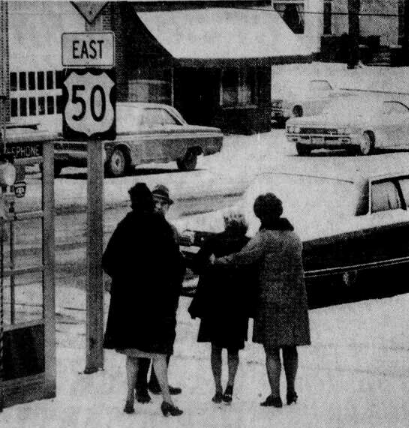 Being helped by a member of her family and accompanied by the Rev. A. E. Miller and Mrs. Miller, of Nelsonville, Marcella Mills was led to a waiting automobile after testifying on her husband’s behalf.

Oliver Mills, 61, of Creola, is shown as he was returned to Pickaway County jail after the Vinton County jury had found him guilty of first-degree manslaughter in the Aug. 31 shotgun slaying of Vinton County Sheriff Harold Steele.

Being helped by a member of her family and accompanied by the Rev. A. E. Miller and Mrs. Miller, of Nelsonville, Marcella Mills was led to a waiting automobile after testifying on her husband’s behalf.

Editor’s note: This story is the fifth installment in a series detailing the death of Vinton County Sheriff Harold Steele, the search for his killer and the trial that followed. The fifth part of this series details court hearings linked to James Oliver Mills, as well as his verdict and sentencing.

The trial of James Oliver Mills, the alleged killer of Vinton County’s fallen Sheriff Harold Steele, was a long and winding road.

As highlighted in retellings of initial court proceedings, much about the series of events that led to the sheriff’s demise was unclear: no one witnessed the sheriff be shot, for example. The 61-year-old sheriff was fatally shot while attempting to execute a search warrant at the residence of Mills near Creola on the final day in August in 1970.

According to The Logan Daily News, Mills claimed that Sheriff Steele was fatally shot when Steele attempted to grab ahold of Mills’ shotgun. Mills stated in court that “he did not have his finger inside the trigger guard of the 12-gauge shotgun when it went off,” the Hocking County newspaper reported.

Closing arguments for the trial were expected to be heard on Feb. 1 of 1971, but were ultimately delayed after Judge Robert Tague, Prosecutor Arlo Chatfield, Assistant Special Prosecutor John Peck and attorneys David Kessler and John Connor were in conference for several hours. The Athens Messenger reported that Judge Tague only emerged from his quarters hours into the meeting in order to take a long sip from a water fountain in the courthouse hallway. Mills, along with numerous spectators, sat in the courtroom awaiting a response.

Arguments were not held until the following day in the Vinton County Courthouse. Prosecutor Chatfield began, with 30 minutes of his closing argument being dedicated toward thanking the Buckeye State Sheriff’s Association, the state highway patrol, the defense counsel and Judge Tague. Chatfield continued his closing quips by saying the events of Aug. 31 “would go down in history in Vinton County and will ‘stay in our minds forever,’” the Logan Daily News reported. Chatfield ultimately called upon the jury to find Mills guilty of first-degree murder and for the death penalty to be delivered.

“Sometimes it becomes necessary to remove a life from society. However, we don’t ask this out of prejudice or a spirit of retaliation,” Chatfield said, as reported in Logan Daily. “Indeed, we pity this being that must be removed.” Chatfield further pointed to Deputy James Wilbur’s testimony as being a “true account” of the events that day, particularly the events that took place while all men were inside the Mills residence.

Next up were the attorneys representing Mills, Kesser and Connor. Connor’s arguments, the Logan Daily News reported, focused on the easement from the power company, the validity of the bench warrant Steele and Wilbur were attempting to serve on Aug. 31, and the credibility of Wilbur’s testimony.

Mills reportedly was threatening power company employees who were stepping on his property after Mills reportedly agreed to an easement with the company for power lines across from his property. As a condition of the easement, an electric line would be dropped to Mills’ house. The dispute reportedly began after Mills received a $15 bill for the power lines, but the company contacted him and stated the bill was sent in error, the Democrat-Enqurier reported. Easement documents revealed that the electric company had the right to trim brush and trees under an agreement with the previous owners.

Kesser argued that in the eyes of the law, Steele was a “common trespasser” on Mills’ property, as the warrant was of a civil nature and not a criminal one.

The Feb. 3, 1971 edition of the Logan Daily News featured on its front page the verdict for Mills: a reportedly at-war jury found the man guilty of first-degree manslaughter. With deliberation reportedly taking 11 hours, the jury later questioned the judge if it were possible for them to deliver a verdict of involuntary manslaughter. Judge Tague reportedly told jury members that regardless of whether the manslaughter count were involuntary or voluntary, both are classified as first-degree manslaughter. He reportedly refused to comment on the matter further to the jury and to local media, the Logan Daily News, the McArthur Democrat-Enquirer and the Athens Messenger reported.

The atmosphere of the courtroom on the day of Mills’ sentence was reportedly unlike any other hearing during that trial, partly because the room was mostly vacant: a first throughout the court proceedings. Inside the Vinton County courtroom were Mills, his wife, and a few curious audience members, as opposed to the packed courtroom witnessed in the previous weeks.

The jury also requested that they hear — another time — the testimonies of both Marcella Mills, the wife of Oliver, and Wilbur, the wounded deputy. Judge Tague advised the jury that this wasn’t possible under Ohio law. The jury finally brought back the guilty verdict of first-degree manslaughter, and Judge Tague sentenced him to one to 20 years in prison. Mills was originally charged with first-degree murder, an offense punishable by death.

Prosecutor Chatfield was reportedly furious with this verdict, calling it “a complete miscarriage of justice.” Special prosecutor Peck admitted, though, that Steele “exceeded authority” by entering the home of Mills, according to the accounts of what happened on Aug. 31. However, Peck noted that the suspected killing occurred 25 to 30 minutes after law enforcement entered the Mills residence, and outside of the Creola home, too.

Judge Tague found that Mills’s arrest, under the understood circumstances, would have been illegal, but if the jury found the arresting process was interrupted by an illegal act of Mills, “the sheriff had a right to continue to serve the warrant outside the house.” Tague also said during the trial that Mills only had a right to self-defense if he were in imminent danger of bodily harm, but not to escape arrest. Mills reportedly took to the wilderness after the death of Steele, and the search for him was reportedly deemed one of the largest of its kind at the time, the McArthur Democrat-Enquirer reported.

On Feb. 8, 1971, Mills entered the Ohio State Penitentiary, hiding his face from photographers.

The Vinton-Jackson Courier will feature more stories about the Steele case in future editions.