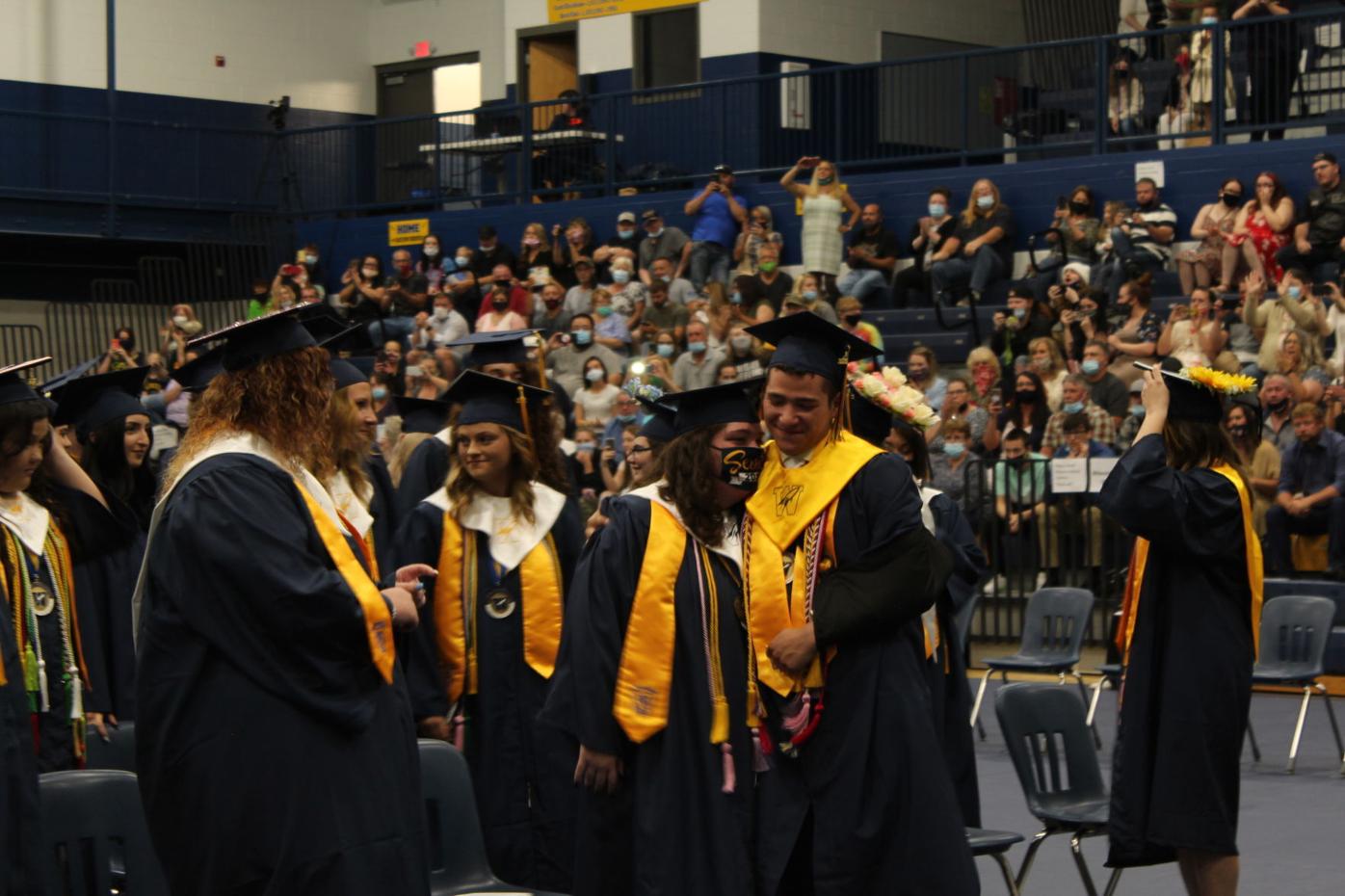 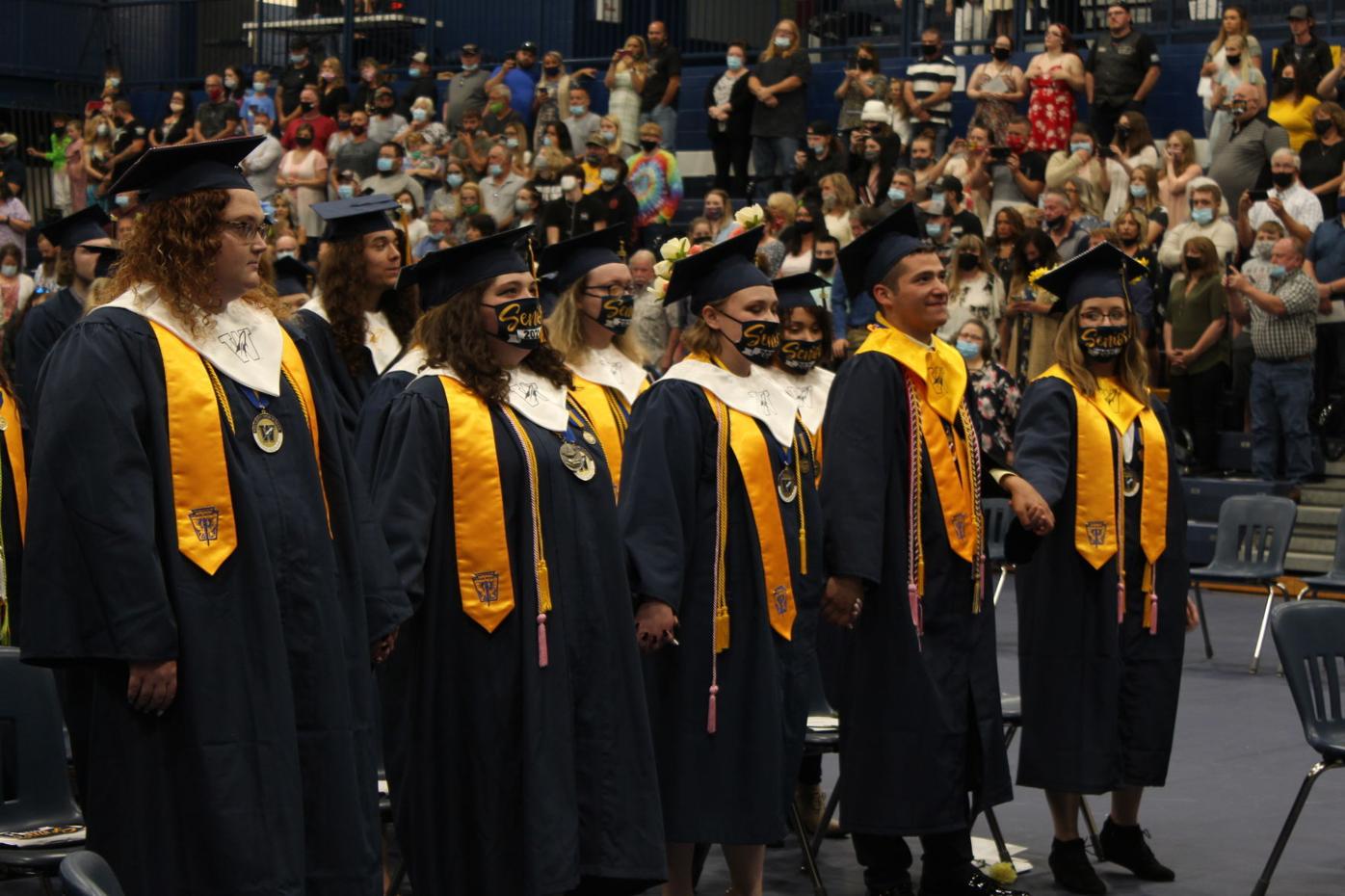 WELLSTON — A crowded room full of family and friends gathered to rejoice as the Wellston High School Class of 2021 received their diplomas and wrapped up their high school careers. As with many schools across the country, the COVID-19 pandemic created a plethora of challenges for this graduating class, a fact that wasn’t overlooked by Best of Class student Kendra Renee McManis.

When given her chance to speak, McManis didn’t hold any punches, saying “The last two years have been absolutely ripped away from us and as much as I feel bad for last year’s graduating class, I feel just as bad for us.”

She went on to talk about how at the end of this class’s junior year, they were told in person classes wouldn’t be held due to the pandemic. According to McManis, her class spent about 60 percent of their time doing work on Chromebooks and then even when classes went back into session, a majority of their time was still spent on the computers.

“I know no one is to blame for it, but it just really sucked,” said McManis. As a student that was quarantined three times during the year culminating in missing about a month of school.

Despite these challenges, the graduating class came through it all and were able to have an in person ceremony surrounded by well wishers. The Golden Rockets proved their resilience in spite of the obstacles they faced.

“I believe we are one of the strongest graduating classes Wellston has ever had even though there are only like 83 of us. You know what they say, small but mighty,” said McManis.

Prior to her speech, the invocation was read by McManis’ fellow Best of Class member and best friend Cordell Rubio, clad in an arm sling after fracturing his collarbone only hours before the ceremony.

Rubio’s speech was centered around leadership and its importance. He stated, “True leaders always listen to others, and when I say listen, I mean listen. They acknowledge the thoughts and ideas of others. They realize that being wrong is okay sometimes.”

He went on to talk about how being a leader is about doing and leading by example. Bravery is part of the job of a leader as well, according to Rubio.

“If you’re not brave enough to go out and fail on your own then something is wrong,” explained Rubio.

“I do regret trying to do a handstand two hours before my graduation,” an action that resulted in a broken collarbone and a trip to the emergency room.

Assistant Principal Shane Stevens presented the Class of 2021 to those in attendance by listing the many accomplishments from their four years at Wellston High School. Those include having the first ever WHS student elected to the executive office as Secretary of State for the Youth Government State Assembly, forming the first soccer team in school history, and being awarded over $280,000 in scholarships with about $71,000 coming from local support on top of the numerous activities, clubs, and volunteer hours.

Three students from this graduating class, Cordell Rubio, Grrett Warnock, and Caleb Lee Ryan Parker, have dedicated their service to the armed forces after their graduation. Rubio was the only one of the three in attendance for the ceremony as both Warnock and Parker were away at training.

After diplomas were awarded, a special thank you was given to Rick Perdue, a teacher with 30 years spent in the district who announced his retirement. Superintendent Karen Boch expressed her and the staff’s appreciation for his years of service to the district and wished him the best of luck on the next chapter in his life.

She then turned her attention to the soon to be graduates saying, “It has been a privilege to be a part of your journey and watch you grow into the fine individuals that you are now but I can’t wait to see what you become.”

And with a toss of their caps, the Wellston High School Class of 2021 became high school graduates and started their adult lives.