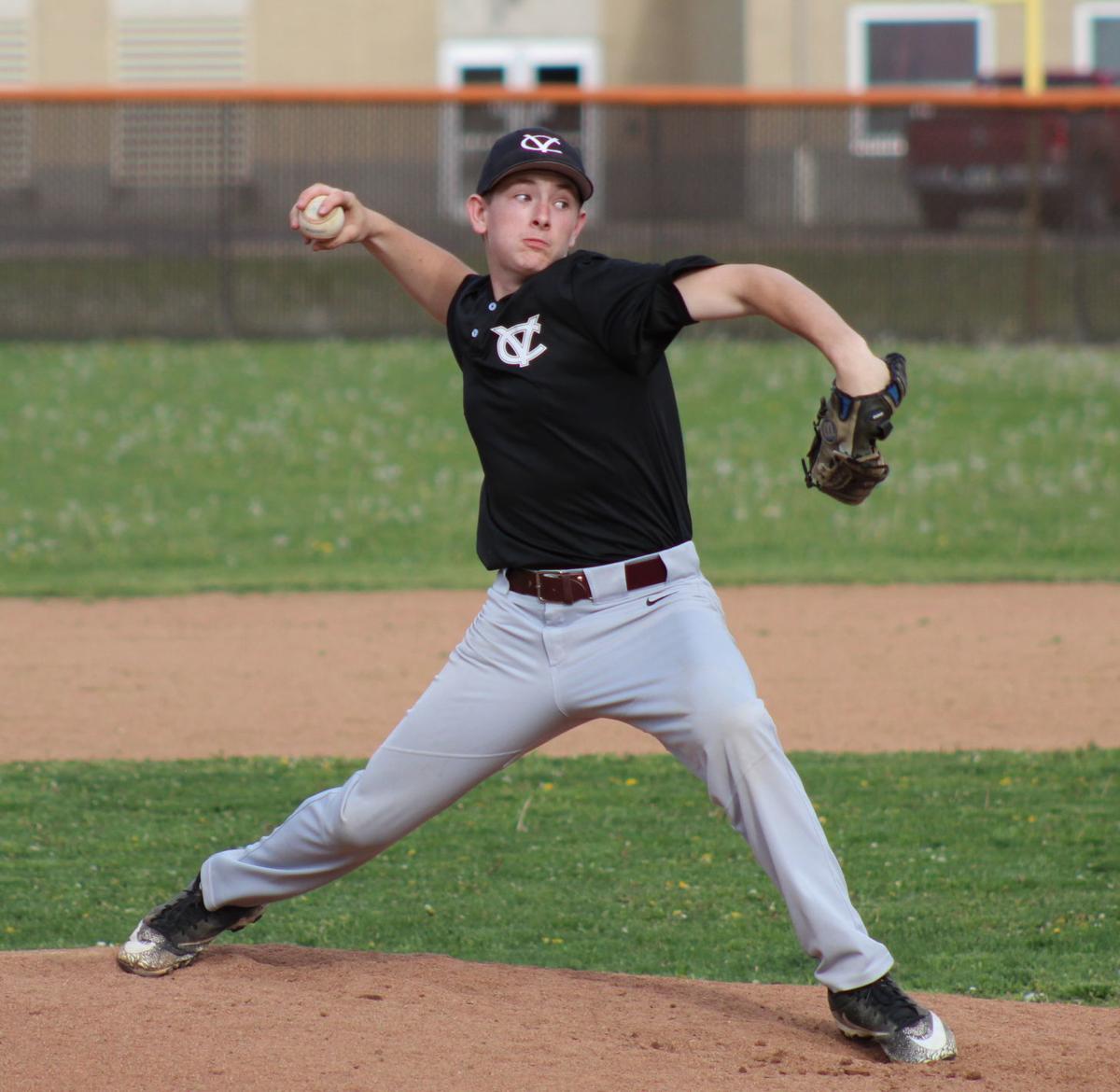 Vinton County’s Zach Bartoe delivers a pitch during the game at Nelsonville-York on April 24. Bartoe struck out 12 in the Vikings’ 8-1 victory. 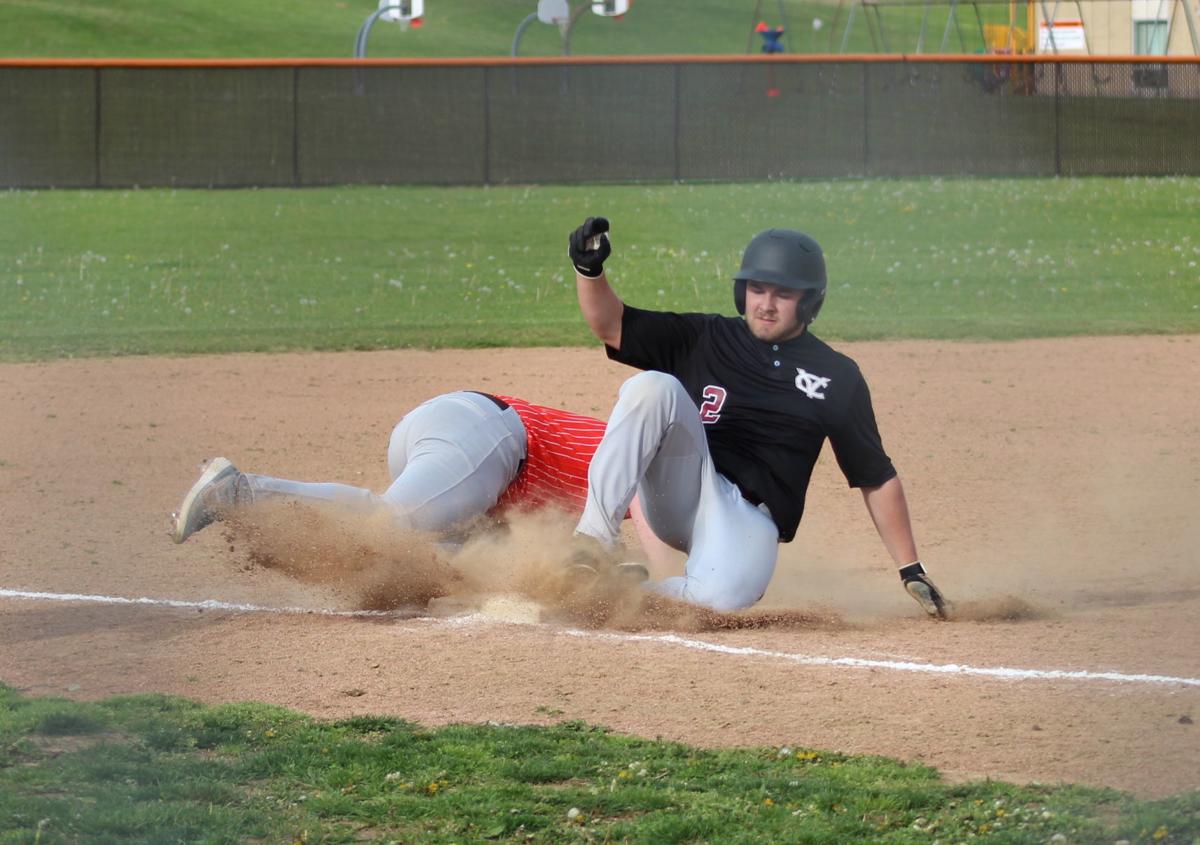 Vinton County’s Logan Ward slides safely into third base during the Vikings’ game at Nelsonville-York. Ward hit a pair of doubles in Vinton County’s 8-1 win. 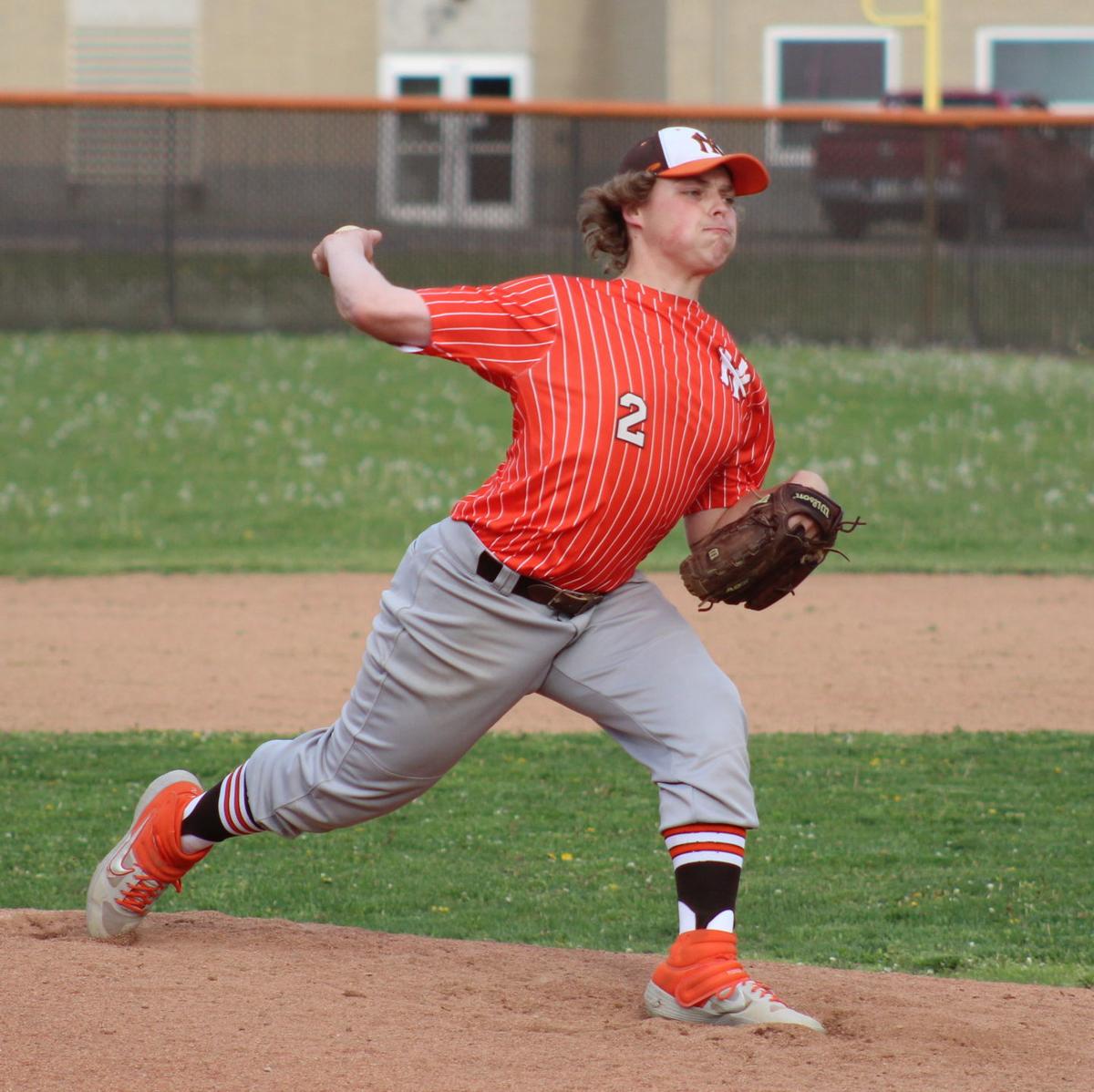 Nelsonville-York senior Reece Robson pitches against Vinton County. Robson gave up two runs in an inning in his first trip to the mound since his sophomore season.

Vinton County’s Zach Bartoe delivers a pitch during the game at Nelsonville-York on April 24. Bartoe struck out 12 in the Vikings’ 8-1 victory.

Vinton County’s Logan Ward slides safely into third base during the Vikings’ game at Nelsonville-York. Ward hit a pair of doubles in Vinton County’s 8-1 win.

Nelsonville-York senior Reece Robson pitches against Vinton County. Robson gave up two runs in an inning in his first trip to the mound since his sophomore season.

Note: This sports recap appears in the Wednesday, May 1 newspaper on Page B3.

Zach Bartoe served another reminder on Wednesday, April 24 that the Vikings in fact have two aces.

Bartoe threw another gem, leading the Vikings to an 8-1 win at Nelsonville-York’s Blackburn Field.

Bartoe allowed only two hits, three walks and struck out 12 in the complete-game effort.

“What Ash is doing is remarkable, but what is going unnoticed is how good Zach is pitching,” Vinton County coach Andrew Barrell said. “That’s another complete game. That’s three in a row.”

According to Barrell, Bartoe has allowed only two earned runs in his last four outings.

“We’ve got a dominant 1-2,” Barrell said. “Zach is kind of lost in the weeds in this whole thing, but he is pitching well.”

The Buckeyes (4-11, 1-9 TVC-Ohio) certainly took notice of Bartoe after Wednesday’s game. Trey Lewis hit a double to lead off the third, and Jacob Chaffin singled him home with two outs.

That was the extent of Nelsonville-York’s offense, as eight different players were struck out by Bartoe.

“His curveball was good. We watched too many good pitches. We have to get better hitting the curveball.”

The win continued the Vikings’ hot streak, as they’ve won eight TVC-Ohio games in a row.

They have outscored the opposition 45-4 during that streak. Bartoe and Abele have combined to pitch 41 2-3 innings, allowing only one earned run and 21 hits during their time on the mound during that stretch.

Bartoe and Abele have been so good that Barrell has had a hard time finding innings for the rest of his pitching staff. It’s a good problem for any skipper to have.

“We’ve had to dip into 1-3 of an inning with our bullpen in the last six games,” Barrell said. “That saves your arms and to be quite honest we’re lacking for some arms right now. What these guys have done is fantastic.”

Bartoe was able to enjoy a lead before he even took the mound against the Buckeyes.

Jacob Wells hit a one-out single, and both runners advanced to second and third on a wild pitch.

River Hayes lifted a foul fly ball to left, deep enough to score Bartoe for the first run of the game.

Wells would later score on a wild pitch, and Vinton County led 2-0 after half an inning.

The Vikings (11-7, 8-1 TVC-Ohio) scored two more in the second. DJ Norris and Bradlee Griffin hit one-out singles to left field, and Zach Radabaugh drew a walk to load the bases.

Richards got a key strikeout, but Abele came through with two outs.

Abele, playing first base on one of his days off from the mound, lined a single to center field. Norris and Griffin scored, and the Vikings led 4-0.

“We build on a lot of confidence when we score early, our pitchers especially,” Barrell said. “And our guys know that our pitchers are locked in right now, especially those two. If we give them an early lead, we can make it stand up.”

Vinton County added another run in the third. Logan Ward hit a two-out double to center, followed by Norris’ RBI single to center.

The Vikings led 6-1 in the sixth after Ward hit a ground-rule double to left and Norris moved him to third on a single to left.

Vinton County scored its final two runs in the seventh. Hayes’ second sacrifice fly of the game scored Abele to make it 7-1. The lead went to 8-1 after Wells scored on a wild pitch.

Meanwhile, Bartoe was dealing. He retired the final 10 batters of the game — five coming via strikeout — as the Buckeyes only had one baserunner over the final four innings.

The news of the day for the Buckeyes was the fact that senior Reece Robson went to the mound to pitch the top of the seventh.

Robson was a standout on the mound during his freshman and sophomore seasons, but a strained UCL in his elbow has keep him off the mound the last two seasons.

A catcher the first three seasons of his high school career, Robson has spent most of his senior season leading the Buckeyes’ defense at shortstop.

Scott Robson, Reece’s coach and father, said that his son has been needling him to get back on the mound.

“I said, ‘you know what? We’ll see how it goes. Maybe I’ll let you throw the last inning.’ He talked me into it,” Scott Robson said.

Reece Robson gave up two earned runs on two hits and a pair of wild pitches in the seventh. He struck out the final two batters he faced as he attempted to shake off the rust.

Scott Robson said that Reece will likely need Tommy John Surgery in the future, and that they’ll wait and see how he feels after Wednesday’s outing to determine if he’ll pitch again.

“Of course, location, he still has to get it dialed in,” Scott Robson said. “But I didn’t think he threw bad, for not throwing for two years. Hopefully if his elbow holds up we can use him in the last week, maybe for the tournament.”

For the Vikings, Norris led the way with a 3-for-3 day at the pate. Griffin, Abele, Wells and Ward each had two hits, while Hayes had a pair of RBIs on sacrifice flies.

The next week will determine the Vikings’ fate in the TVC-Ohio. They host Wellston on Friday, Meigs on Tuesday and River Valley on Wednesday.

If they win all three games, they can do no worse than a share of the league title with Athens.

Barrell said the Vikings are dialed in, and ready to come to the ball yard every day as they chase what could be the program’s first league title in 23 years.

“They come to the field ready to play,” he said. “It doesn’t really matter right now the opponent, they’re ready regardless of who’s in front of them. You put the Reds in front of us now, we’d get killed but we would at least have confidence in the first few innings against them.

“They’re playing hard. They’re excited to be here. They heard we may have rain on Friday and the idea of maybe not being able to play on Friday is killing them. They want to be on the field. I was giving them a day off (Thursday) and they begged me to practice. That’s where we’re at right now. It’s a good problem to have for a coach.”

* * * Kevin Wiseman is the sports editor of The Athens Messenger.