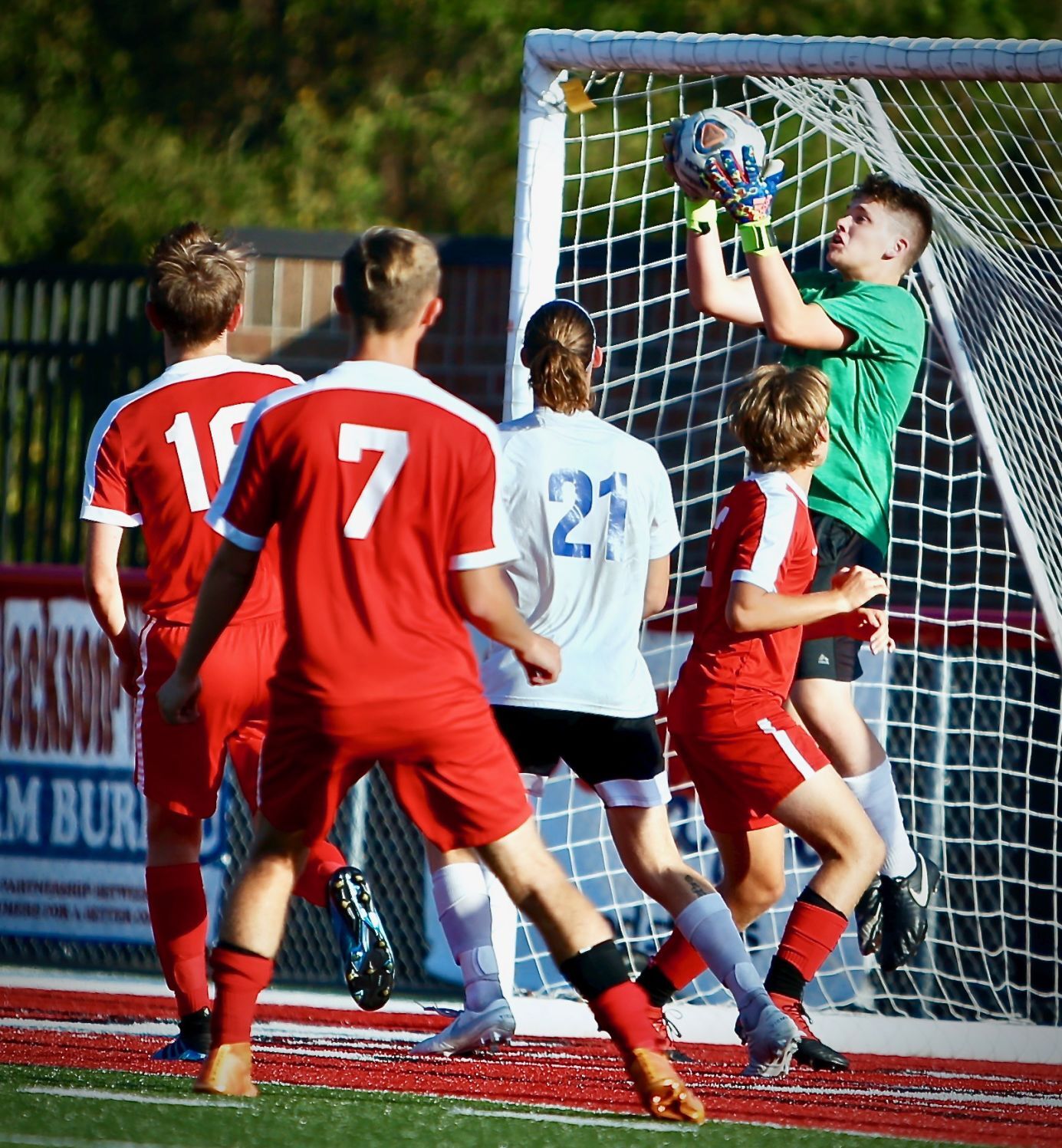 Jackson goalkeeper Ty Broermann finished with four saves on the night, including two saves during penalty kicks in the Ironmen’s 3-2 victory in PKs over Circleville on Thursday, clinching their third straight sectional final. 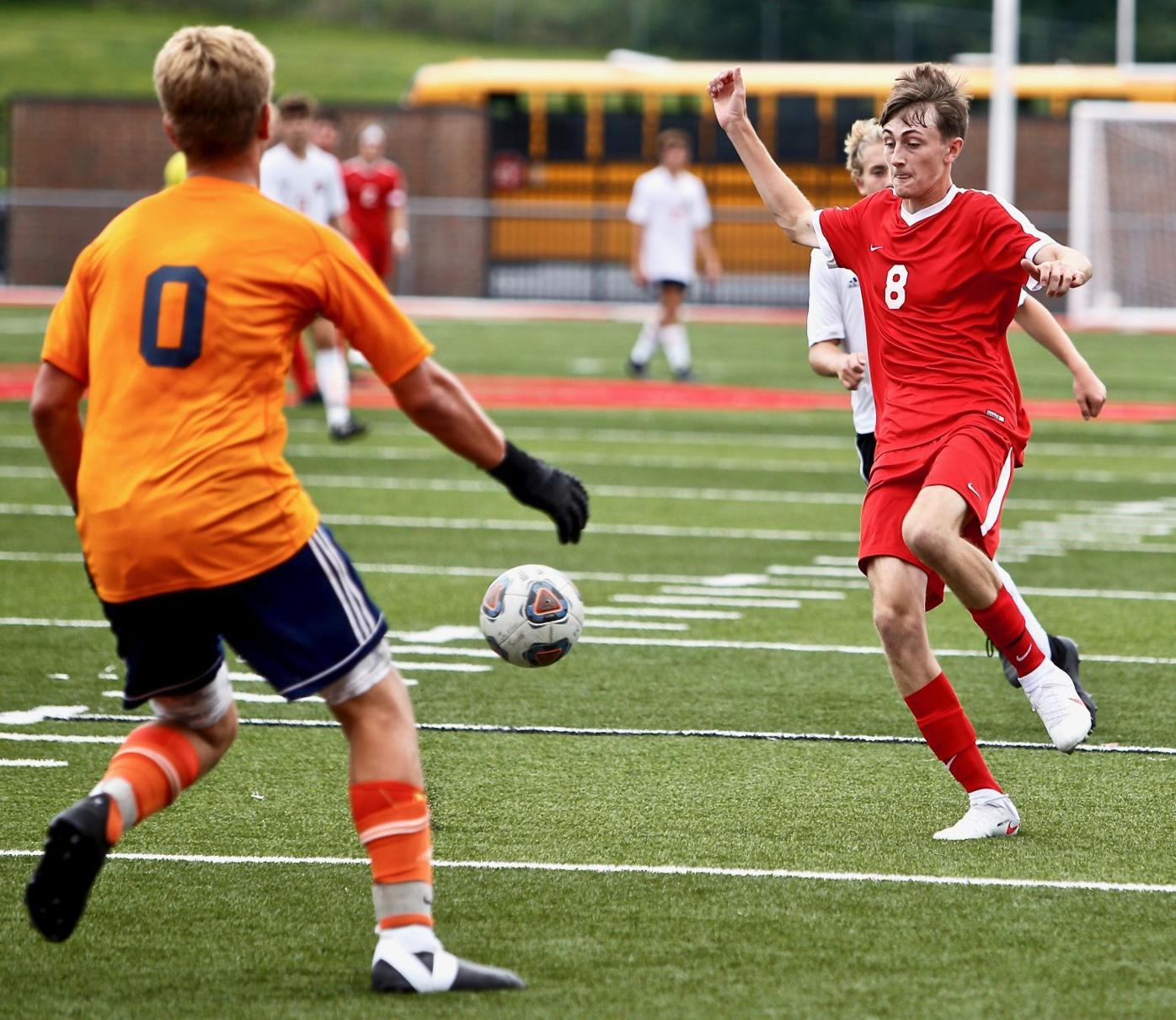 Jackson’s Noah Collins finished with an assist and a goal in penalty kicks in the Ironmen’s 3-2 victory in PKs over Circleville on Thursday, clinching their third straight sectional final.

Jackson goalkeeper Ty Broermann finished with four saves on the night, including two saves during penalty kicks in the Ironmen’s 3-2 victory in PKs over Circleville on Thursday, clinching their third straight sectional final.

Jackson’s Noah Collins finished with an assist and a goal in penalty kicks in the Ironmen’s 3-2 victory in PKs over Circleville on Thursday, clinching their third straight sectional final.

JACKSON — As the minutes winded down, the lofty goals Jackson set for itself nearly went up in smoke.

And in the end, Circleville missed its equalizer wide right that gave Jackson a 3-2 victory, clinching its third straight sectional title on Thursday.

“This win feels incredible,” Jackson’s Noah Collins said. “Only one other time in school history has Jackson ever won three sectional titles in a row, so to be a part of that history is a great feeling.”

The battles over the past three years between Circleville and Jackson have turned the matchups into a rivalry.

Circleville ousted Jackson in a Division II district semifinal two years ago, and Jackson won the regular season matchups last season and this season, but getting the playoff win adds another layer to the rivalry.

“We knew coming in that this game wasn’t going to be easy,” Jackson’s Ty Broermann said. “Circleville’s record was 4-8-3 coming into the game, but that’s very misleading. They play in a really good conference and they’re a good team, we knew that just from playing them earlier this year.”

After a scoreless first half, the Ironmen wasted little time striking first. The ball ended up at the feet of Collins and he found a wide open Connor Ball, who connected with the back of the net for a 1-0 lead less than two minutes into the second half.

“I saw Connor open just seconds after I got the ball,” Collins said. “There was a little space in between the two defenders and I was able to get it to him. From that point it’s just about trusting your guy to finish and he did.”

However, Circleville answered back just minutes later as Will Bullock got the ball through the scramble and connected on a goal for a 1-1 tie.

In overtime, Jackson charged towards the goal and Trent Wolford connected on a goal following a block from Circleville’s keeper, but Wolford was called offsides which nullified the game-winner.

After no goals were scored in double overtime, it came to penalty kicks and Circleville took the opening advantage and made its kick after Jackson missed.

Collin Ghearing made a goal, then Broermann guessed correctly, dove left and made the save.

“I read the guy’s hips and they were pointed towards the left corner,” Broermann said. “It was just a matter of me getting over far enough and extending my body enough to make the save.”

Collins then connected with the top right corner and Broermann made another incredible save, this time to the right side of the goal to put Jackson ahead 2-1.

“It’s a little nerve-racking stepping up to take the penalty,” Collins said. “I always go right. I don’t look at the keeper or anything, it’s just me and the ball. I pick my side, and hope to bury the shot.”

Circleville and Jackson both hit its next shot, putting all the pressure on the Tigers to extend the game. Broermann guessed correctly and dove to the right side, but the ball hit the back bleachers, sealing the title for the Ironmen.

“A win is a win and we’ll enjoy this,” Broermann said, happily exhausted.

Jackson now advances to a Division II district semifinal on Wednesday at Athens, who knocked the Ironmen out of tournament play in 2017.

Broermann was a freshman when that game happened, but he still remembers the feeling of that game and is ready for the rematch.

“Beating Circleville was the start of our revenge tour,” Broermann said. “They beat us in 2018 so it felt good to get this one. Athens beat us in 2017, so we know what we need to do and that’s finish better. We know that our defense is pretty stout, but we have to get a little bit with our conditioning and bury shots.”