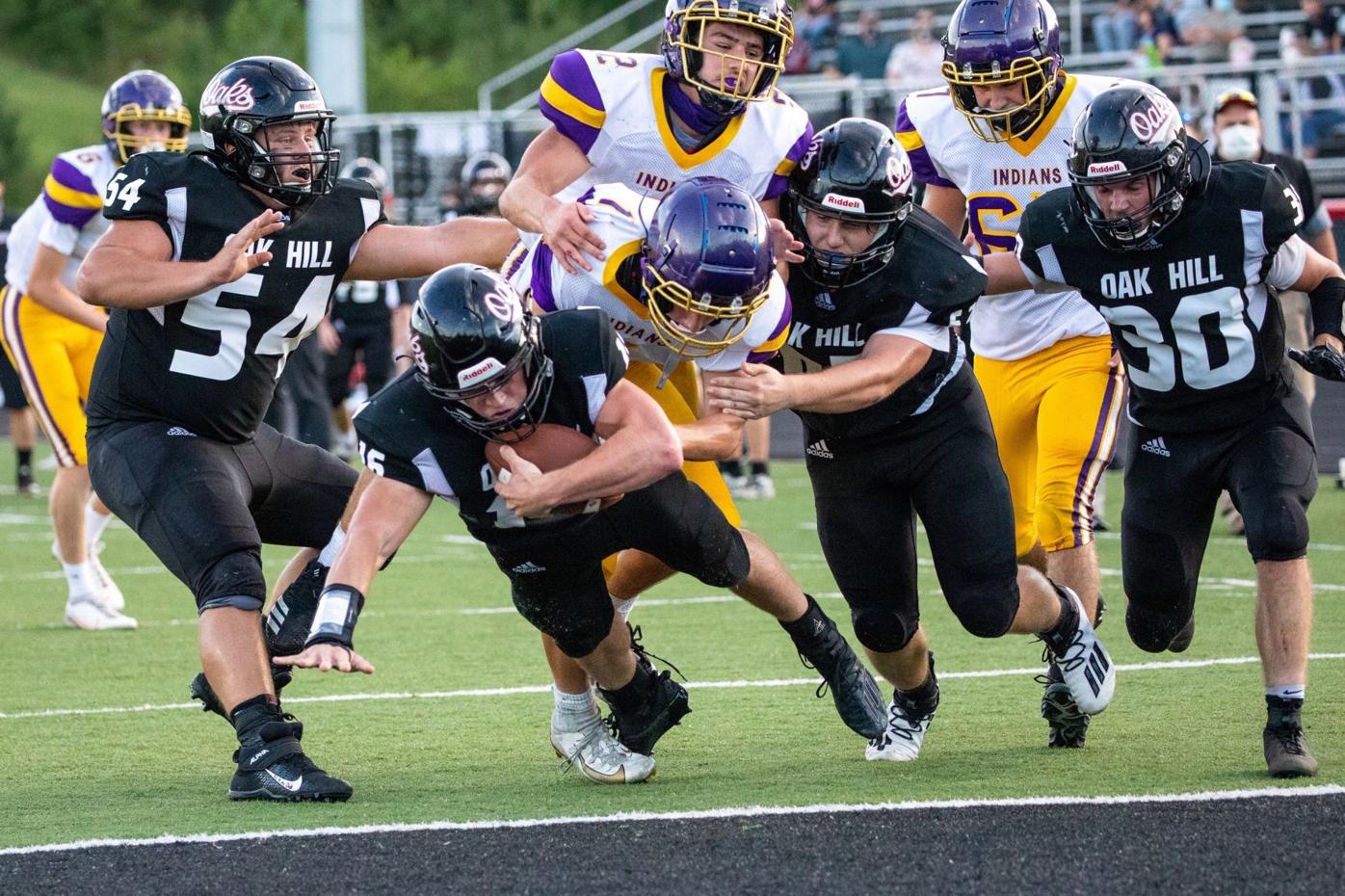 Oak Hill’s Brandon Beam (center) muscles his way to a 19-yard touchdown against Valley. Beam finished with 196 yards and two touchdowns in the Oaks’ 42-28 victory over the Indians on Friday. 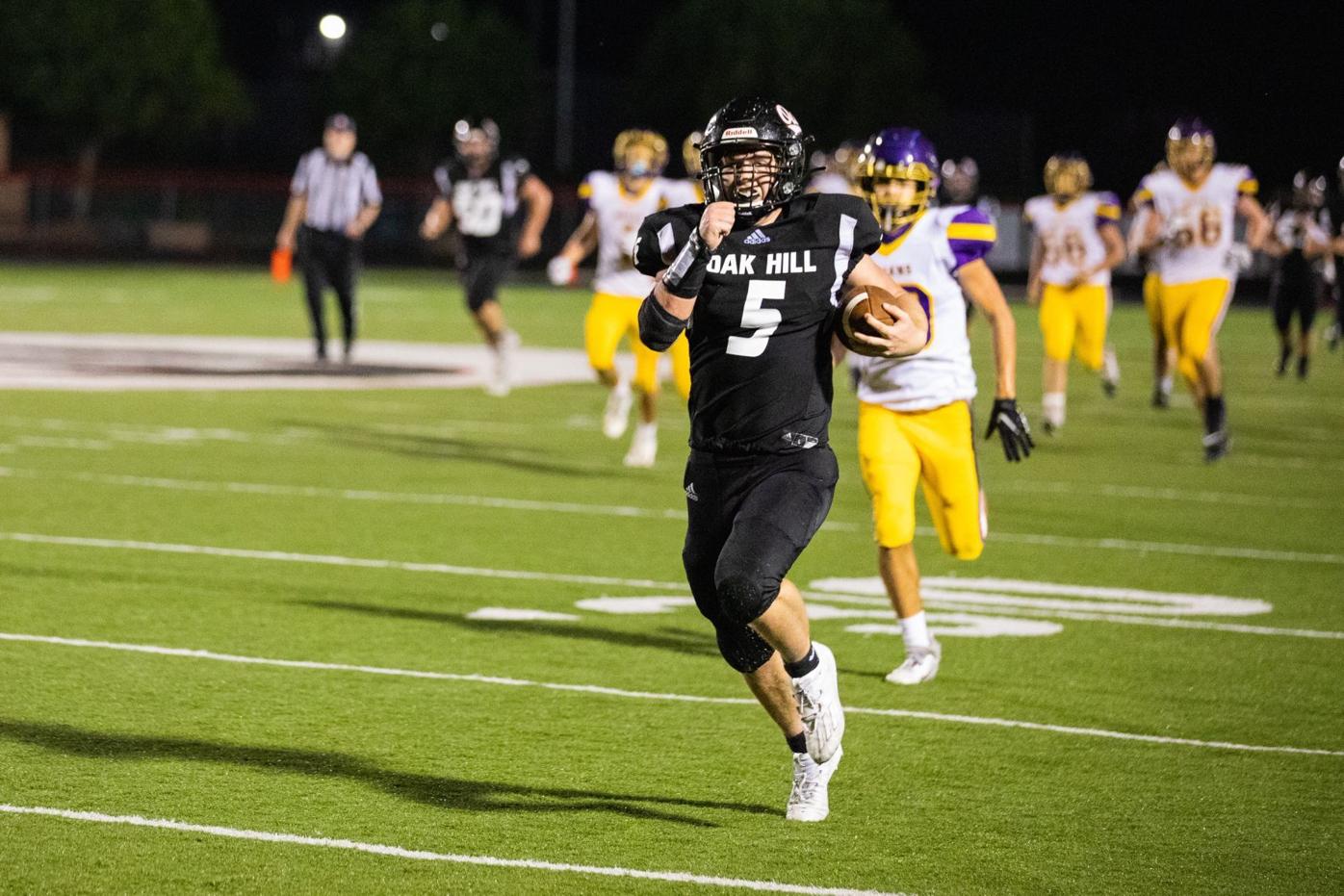 Oak Hill’s Alex Firpo sprints 73 yards for a touchdown against Valley. Firpo finished with 157 yards and two touchdowns in the Oaks’ 42-28 victory over the Indians on Friday.

Oak Hill’s Brandon Beam (center) muscles his way to a 19-yard touchdown against Valley. Beam finished with 196 yards and two touchdowns in the Oaks’ 42-28 victory over the Indians on Friday.

Oak Hill’s Alex Firpo sprints 73 yards for a touchdown against Valley. Firpo finished with 157 yards and two touchdowns in the Oaks’ 42-28 victory over the Indians on Friday.

OAK HILL — Oak Hill attempted three passes on the night. One fell incomplete and the other two resulted in sacks.

But it’s running game was in near historic form.

“We blocked very well up front and ran the ball very effectively,” Oak Hill coach Paul Carver said. “All phases of the games did their job and this was a total team effort. Still a few things we have to fix and we had a couple turnovers, one that turned into a touchdown that came the game close. But overall, it was great effort from our guys.”

The Oaks piled up over 300 rushing yards in the first half as the Indians had no answer about how to control the Oaks on the line of scrimmage.

Nor could the Indians stop Brandon Beam.

After forcing a turnover on fourth down, the Oaks marched back right down the field as Conor Dickens scored from 39 yards out for a 14-0 lead.

Dickens also finished with 16 carries for 112 yards with a touchdown.

“He played amazing, offensively and defensively,” Beams said of Dickens’ effort. “He made some great plays for us and came up with a couple interceptions that changed momentum for us. That last one should have been a pick-six, but we got called for a bad block so we owe him for that.”

Then it was back to Beam entered another level of dominance, dragging a pair of Valley defenders with him on the way to a 19-yard touchdown.

“We all carry a sense of positivity and responsibility, and there are times that I get my head down when I feel like I should have made a play,” Beam said. “But I do everything for my team and they pick me up anytime I need them, and I felt like this was a way to pay them back for it.”

Although he was done finding the endzone for the night, he continued to have a major impact on the game. After Valley got on the board with a 22-yard touchdown pass from Andrew Andronis to Ty Perkins, Oak Hill had a quick answer.

Beam busted through the left side and sprinted 58 yards before being tackled. The next play, Brock Harden found paydirt up the middle for a 19-yard score for a 28-7 advantage.

On the evening, Beam finished with 18 carries for 196 yards and two touchdowns.

“All credit goes to the offensive line. Those guys up front never get any credit, but they deserve it,” Beam said. “They played great as a unit, and I have complete respect for those guys. We look good because of them.”

While Beam and Dickens had the lion’s share of carries, the Oaks had an ace up their sleeve in Alex Firpo.

Mainly used as a tight end for blocking, Firpo received four carries on the evening.

Yes, four carries isn’t a lot. But when you do what Firpo did with those carries, four is all that’s needed.

His second carry of the night came in the third quarter, following an interception by A.J. Harrison, the senior flexed his muscles and powered his way to a 29-yard touchdown.

Valley scored on a 94-yard fumble recovery that brought the game to 35-28. However, Firpo had the response.

Following the kickoff, he took the handoff and sprinted 73 yards down the left sideline to paydirt that sealed the victory for the Oaks.

Firpo finished with 157 yards and a pair of touchdowns on the evening.

“The line opened up a massive hole on the left side and I hit it as hard as I possibly could,” Firpo said. “Once I was in the open field, I told myself I needed to get to the endzone as quickly as possible.”

Oak Hill returns to action on Friday at Wheelersburg.

“Wheelersburg is going to throw the football so our secondary is going to get a lot of work this week in practice,” Carver said. “From what I saw in the Chillicothe film, they run a lot of screens so we have to stay disciplined and tackle in space. We can’t turn the ball over or get penalties. I think they got us for five offsides last season so we can’t give up extra yards.”