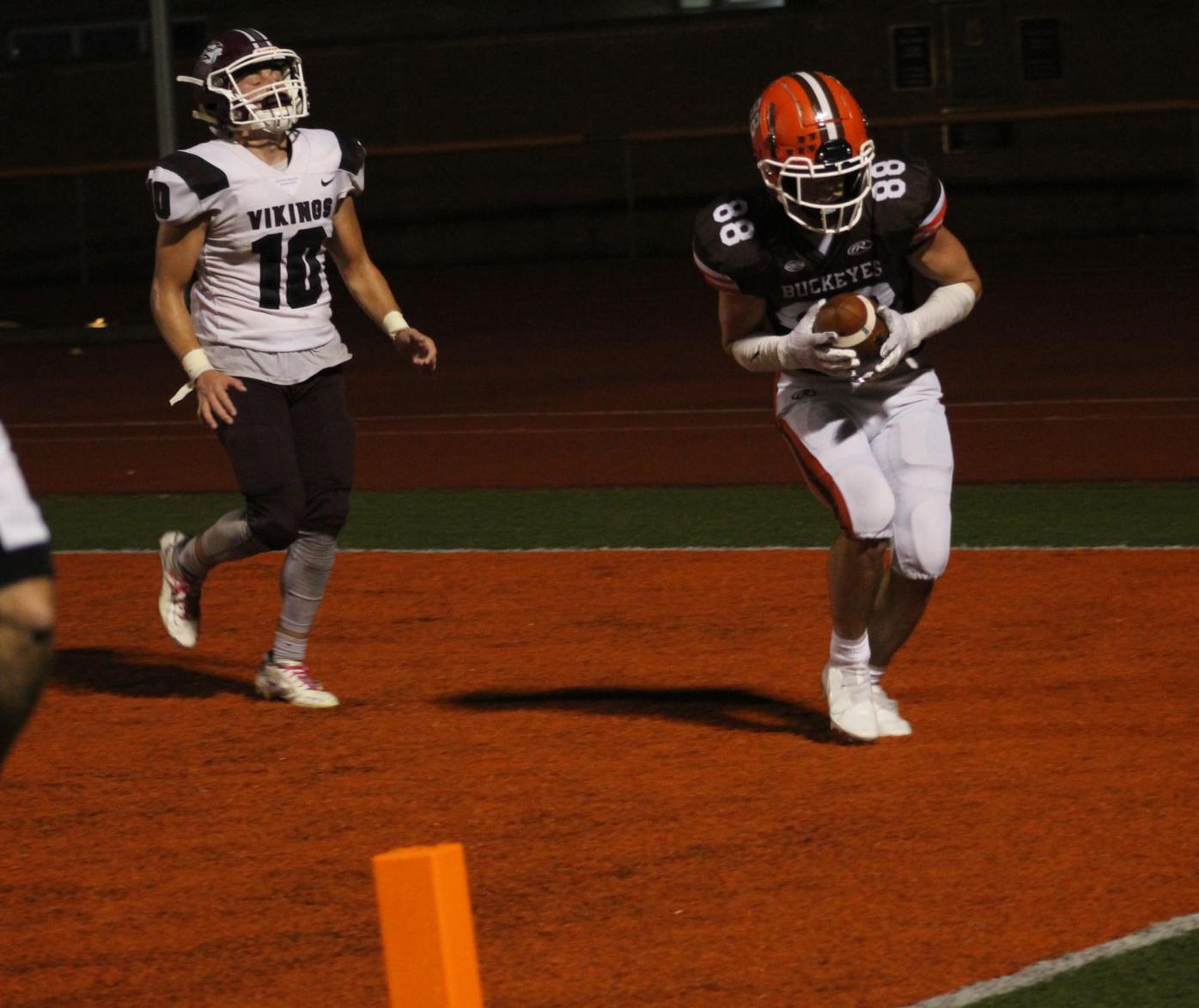 Nelsonville-York’s Leighton Loge catches a 2-point conversion in front of Vinton County’s River Hayes (10) during the fourth quarter on Friday. Loge caught five passes for 88 yards and a touchdown during N-Y’s 20-7 win over Vinton County. 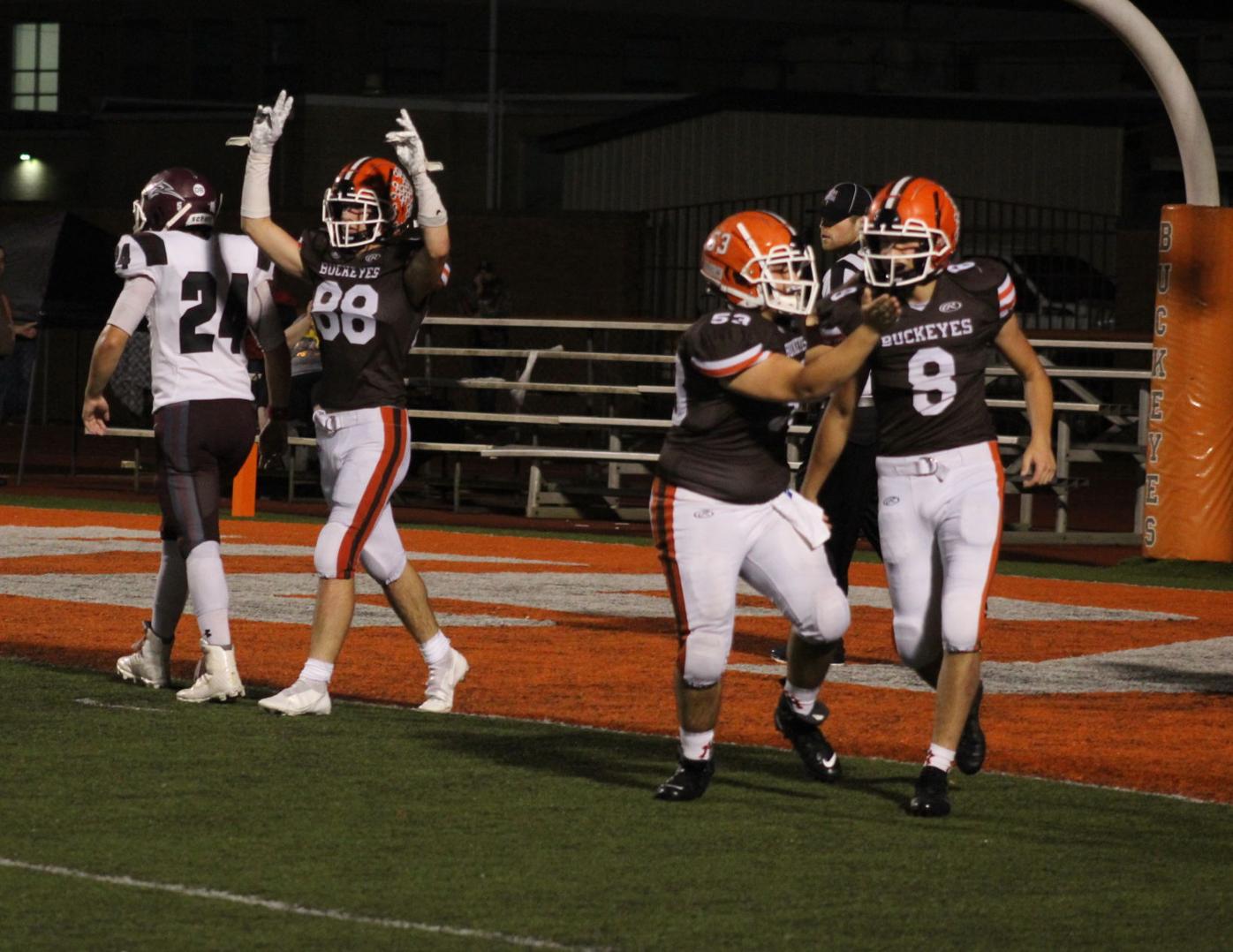 Nelsonville-York’s Hudson Stalder (8) celebrates with Dalton Inman (53) and Leighton Loge (88) after Stalder ran for a 71-yard touchdown run in the fourth quarter on Friday. Nelsonville-York won at least a share of the Tri-Valley Conference Ohio Division title with the 20-7 win over Vinton County.

Nelsonville-York’s Leighton Loge catches a 2-point conversion in front of Vinton County’s River Hayes (10) during the fourth quarter on Friday. Loge caught five passes for 88 yards and a touchdown during N-Y’s 20-7 win over Vinton County.

Nelsonville-York’s Hudson Stalder (8) celebrates with Dalton Inman (53) and Leighton Loge (88) after Stalder ran for a 71-yard touchdown run in the fourth quarter on Friday. Nelsonville-York won at least a share of the Tri-Valley Conference Ohio Division title with the 20-7 win over Vinton County.

“A lot of people left us for dead,” Richards said. “Heard it all winter. Didn’t have a chance, this and that, lost too many kids. And we lost good kids, but these kids just worked their tails off all winter.”

That work is paying off for the Buckeyes, who added another league championship to their all-time total on Friday.

The Buckeyes weathered a lightning delay and torrential downpours, winning a showdown against Vinton County 20-7 at Boston Field.

Nelsonville-York has won six games in a row overall, and clinched at least a share of the Tri-Valley Conference Ohio Division championship with the win.

It’s the 24th league title in program history, the most of any TVC-Ohio team. The Vikings were trying to win their first since 1999.

“It’s amazing,” N-Y junior Leighton Loge said. “I guarantee we worked harder than so many teams out there. After losing (the TVC title) last year, it hurt and we worked so hard in the offseason and it’s great to send these seniors out with a win.”

The Buckeyes’ were led by defense and an opportunistic offense in handing the Vikings (5-3, 3-1 TVC-Ohio) their first league setback.

Nelsonville-York (6-3, 5-0 TVC-Ohio) keyed in on the Vikings’ run-oriented attack, holding them to 63 yards rushing on 35 carries.

“This is similar to River Valley’s offense and we know that they’re going to push the pile and go for three yards every time,” Loge said. “We know that if they lose a few yards, their whole drive can be ruined. So we tried to capitalize on that.”

The Vikings were held to 96 yards of total offense, with 80 coming on their first-quarter scoring drive.

“We just struggled, not really with assignments, just firing off the ball a little bit,” first-year Vinton County coach T.J. Carper said. “When it comes down to these games, it’s about who wants it the most and tonight, I just felt Nelsonville wanted it more than us.

“They’ve been here so many times before, it’s just an expectation. That’s what I want to do at Vinton County, is build that.”

The first half was played in a driving rainstorm, but the worst came at the start of the third quarter.

Leading 12-7 at halftime, the Buckeyes fumbled the opening kickoff of the third quarter. The Vikings recovered and ran one play before the contest was delayed by lightning.

The game stopped for an hour and 22 minutes while the teams waited out the storm.

Loge said the Buckeyes passed the time going over the game plan.

“It was really, how did they score on us? What did they do and what can we do to prevent that? A lot of game planning then after a while, just keeping each other fresh. Keeping each other ready to play,” he said.

Richards said there was no letdown in the Buckeyes during the delay.

“These guys had their focus,” Richards said. “These kids sat in there with their pads on, they were just chomping at the bit to get back out here.”

Nelsonville-York’s defense set the tone once the game restarted, stuffing a fourth-and-three rushing attempt from Zayne Karr after the Vikings had advanced to the Buckeyes’ 21-yard line.

It was the theme of the second half, as the Vikings were held to 16 net yards, including a remarkable negative-17 yards rushing after halftime.

Senior defensive linemen Nathan Martin and Tucker Levering lived in the Vikings’ backfield most of the night, making running room hard to find.

“(Assistant) coach Jason Andrews, his son Noah (Andrews), are our go-to guys on defense,” Richards said. “They caught us a little bit wide. We made a little bit of an adjustment with our defensive ends. Changed our linebackers a bit because they were hitting us off tackle.”

With the defensive dialed in, the Buckeyes’ offense delivered the final knockout punch early in the fourth quarter.

Stalder got in the open field and was off to the races for a 71-yard touchdown run, igniting a wild celebration on the Buckeyes’ sideline.

“Game planing in the locker room,” Loge said. “We went through our iso and we knew where people lined up, who we needed to block, and we knew that play was going to be big for us.”

Stalder led the Buckeyes on the ground on the strength of that run, gaining 114 yards on 18 carries.

“Dominik Robson caved out, Loge got the kick out and Gavin Richards threw one hell of a block on their No. 1 (linebacker Kody Colley), who is a good football player,” Rusty Richards said. “We’ve been waiting to get him (Stalder) loose all year. If he gets loose, not too many people are going to catch him.”

Down two scores, the Vikings were forced to go to the air. Quarterback Braylon Damron had 33 passing yards, all in the second half, but was unable to escape the Buckeyes’ pressure.

It was a comeback win for the Buckeyes, who trailed 7-0 after the Vikings drove 80 yards on 12 rushing plays in the first quarter. That drive was capped off by Broc Moore’s 4-yard run.

The Buckeyes eventually got moving thanks to big plays in the passing game.

On fourth-and-five from the 13, Loge was able to shake free of a defender in the end zone. Carter found him for the touchdown, allowing N-Y to trail 7-6 with 5:29 left in the opening half.

“We were looking for that play,” Loge said. “Once it opened up, Drew knew where to hit me.”

The Vikings lost a fumble on the next possession, with the rain coming down hard, the Buckeyes’ Jake Conkler gaining the recovery.

The Buckeyes wasted no time, Carter hitting Loge up the sideline for a 41-yard gain down to the Vikings’ 1-yard line.

Carter scored on the next play, the Buckeyes taking the 12-7 lead.

The Buckeyes were in business again when the Vikings lost another fumble in the rain, Levering emerging from a pile with the football.

Nelsonville-York advanced the ball to the Vikings’ 6-yard line, but Vinton County stopped a fourth-down rushing attempt with with three seconds left in the half.

The Buckeyes also advanced the ball to the Vikings’ 8-yard line in the third quarter before penalties and sacks eventually forced a punt.

“Defensively, I thought we played a great game,” Carper said. “They’re a high-powered offense. They score 40 points a game and we held them to 20, but offensively it’s just wasn’t clicking tonight.”

Moore led the Vikings with 35 yards rushing, while Karr added 25 yards on the ground. River Hayes had an interception on defense.

Vinton County will still have plenty to play for in the regular season finale against rival Wellston. The Vikings and Rockets each have just one TVC-Ohio defeat against N-Y and both are alive for a potential playoff berth.

“This game doesn’t define the rest of our season,” Carper said. “We have one more game that can determine our fate. Lick your wounds tonight, get up in the morning and let’s get back to work.”

The Buckeyes will travel to Athens in an attempt to win the league title outright. While N-Y shared the top spot with Athens in 2019, it hasn’t won an outright TVC-Ohio title since going 10-0 in 2017.

“We’re just as excited for that game as we were this game,” Loge said. “It’s just as important.”