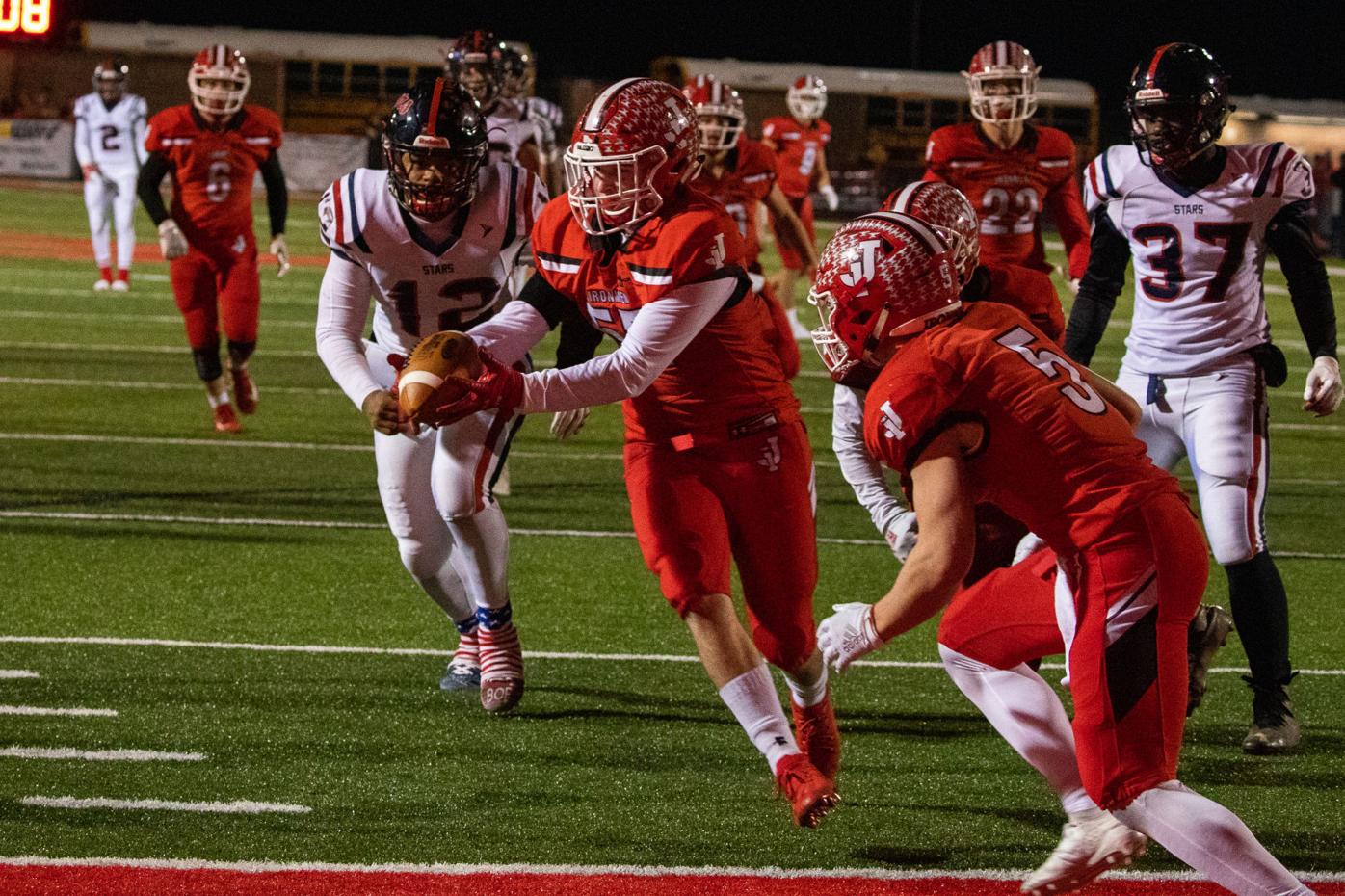 Jackson’s Grant Mastin (left) recovers a blocked punt by Jayden Spires (right) in the endzone for the touchdown last season. Mastin returns for his junior year to his linebacker spot after leading the team in tackles. 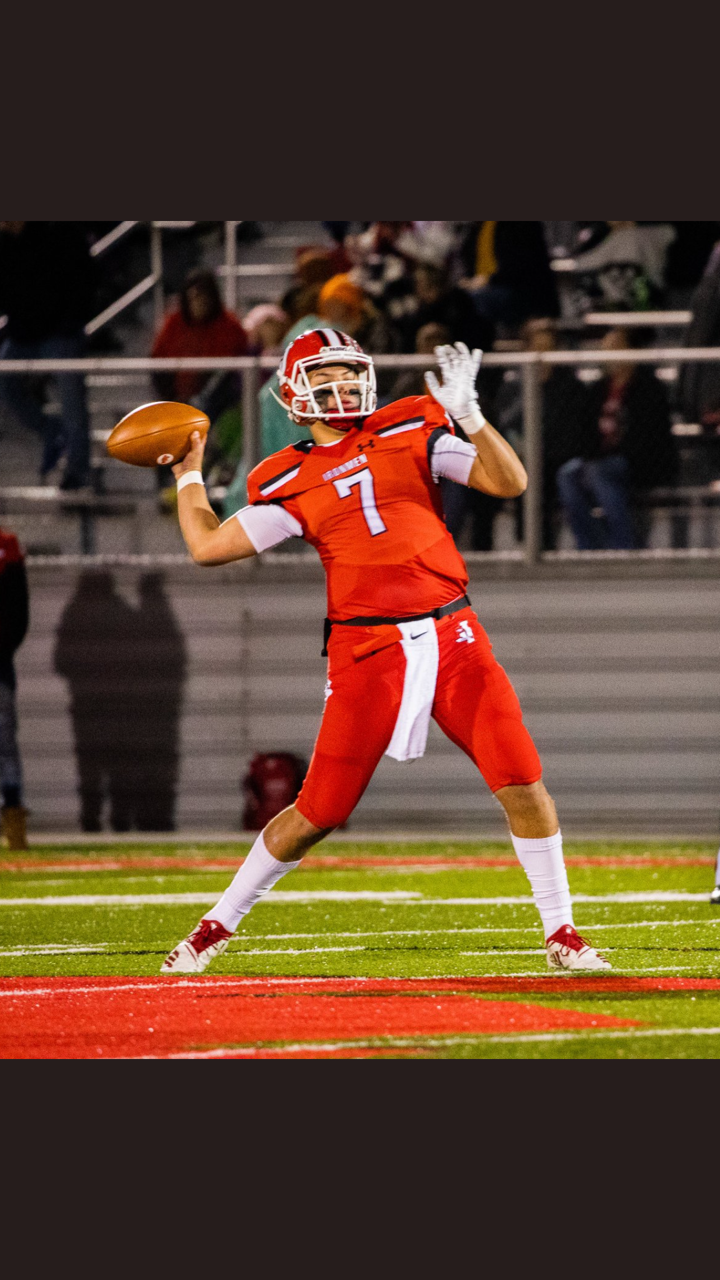 Jackson’s Jacob Winters throws a pass down the field last season against Chillicothe. After dazzling as a freshman, he’ll now step into the role of starting quarterback as a sophomore after seeing some action under center last year.

Jackson’s Grant Mastin (left) recovers a blocked punt by Jayden Spires (right) in the endzone for the touchdown last season. Mastin returns for his junior year to his linebacker spot after leading the team in tackles.

Jackson’s Jacob Winters throws a pass down the field last season against Chillicothe. After dazzling as a freshman, he’ll now step into the role of starting quarterback as a sophomore after seeing some action under center last year.

JACKSON — One successful senior class exits, and another one steps to the forefront of Jackson football.

That’s been the rotation for the past number of years, and this year is no different despite the fact that this is the smallest senior class in Andy Hall’s tenure as head coach.

However, these are experienced seniors who learned from a previous class that went 33-12, and are now ready to take that step in their final season.

“Nothing changes in regards to expectations, no matter how large or small a certain class is. In this community, you’re expected to compete for championships night in and night out,” Hall said. “The seniors in this class where always small in numbers going back to junior high, but they’re great leaders who have been through tough battles. They’re committed to continuing the excellence we’ve established over the past decade.”

The Jackson train rolls right along, and this year it’ll have a new conductor leading the way as sophomore Jacob Winters takes over as the team’s quarterback.

Winters showcased his talents last season in some big games and scored a touchdown in four different ways, including throwing a touchdown pass in the playoff game against Jonathan Alder.

“He’s a special talent for just being a sophomore, and we were able to spread him out a little bit last season to show what he is capable of,” Hall said. “We’re going to ask a lot of him from throwing to running since he’s also our biggest running back at 230 pounds. But we’re going to spread the ball out a lot more and he just needs to make the right plays.”

While Winters will surely see some designed quarterback runs, he’ll be joined in the backfield by junior Evan Spires and freshman Cade Wolford, who are tasked with replacing Spires’ older brother, Jayden, who was the Division III District Player of the Year last season.

On the outside, this is where Jackson’s strength will be with West Virginia commit Treylan Davis leading the way alongside junior Tristan Prater, senior Nate McManaway, senior Macon Perrill and juniors Drew Bragg and Holden Blankenship, who are back on the field after not playing last season.

“This is the best and most talented group of skill guys I’ve ever had during my coaching tenure,” Hall said. “Having those guys makes up for the lack of experience at the running back position compared to what we had last season with four seniors in the back field. We’ll adjust our system to fit what works best and getting those guys the ball down the field will be a huge part of our offense.”

On the offensive line, this is where things get a little dicey considering three new lineman will step into starting spots alongside returning starters in seniors Aden Strawser and Blake Cross.

Look for players like Grant Mastin, Caleb McGraw, A.J. Denny, Trent Evans, Nate O’Bryan, Hayden Bice and Shawn Woodyard to step up and take on the task of working in the trenches, offensively and defensively.

“Most of those guys are sophomores and don’t even have driver’s licenses yet, so this is the year for those guys to make a name from themselves,” Hall said. “It’s a complete rebuild this time after losing our entire defensive line, so there’s a lot of production to replace. These guys have had really good camps so now is their time.”

Mastin, who led the team in tackles with over 100 last season, returns to his spot at linebacker alongside Davis, who will be joined by Landon Erwin and Brodie Butcher.

Spires, who had six interceptions and returned four of them for touchdowns before suffering a season-ending injury, returns and leads a talented secondary along with Prater, McManaway, Winters, Blankenship, Bragg and Perrill.

“Just like those guys as receivers are our strength offensively, they’re also our strength defensively,” Hall said. “Prater and Spires are shutdown corner type of players, Bragg and Blankenship are tremendous athletes and we couldn’t be happier to have them back with us. Winters had six interceptions last year, Perrill and McManaway have had great summers so we know we can rely on those guys to make plays when the chance arrives.”

2020 is marking a new era of Jackson football with literally half of the team being sophomores with little to no varsity experience.

And with only six games to make improvements, it means players have to make faster developments, which could make or break the season. But no matter what, the standard always remains the same.

“We want to win our conference and host playoff games, it’s as simple as that. That is our goal every year,” Hall said. “But this year is a little different and we have the chance if we have a high enough seed that we could host all the way to a regional final, which would be massive. But either way home or away, we still have to handle our business on the field and focus one game at a time.”

Jackson begins its season on Friday at Logan.