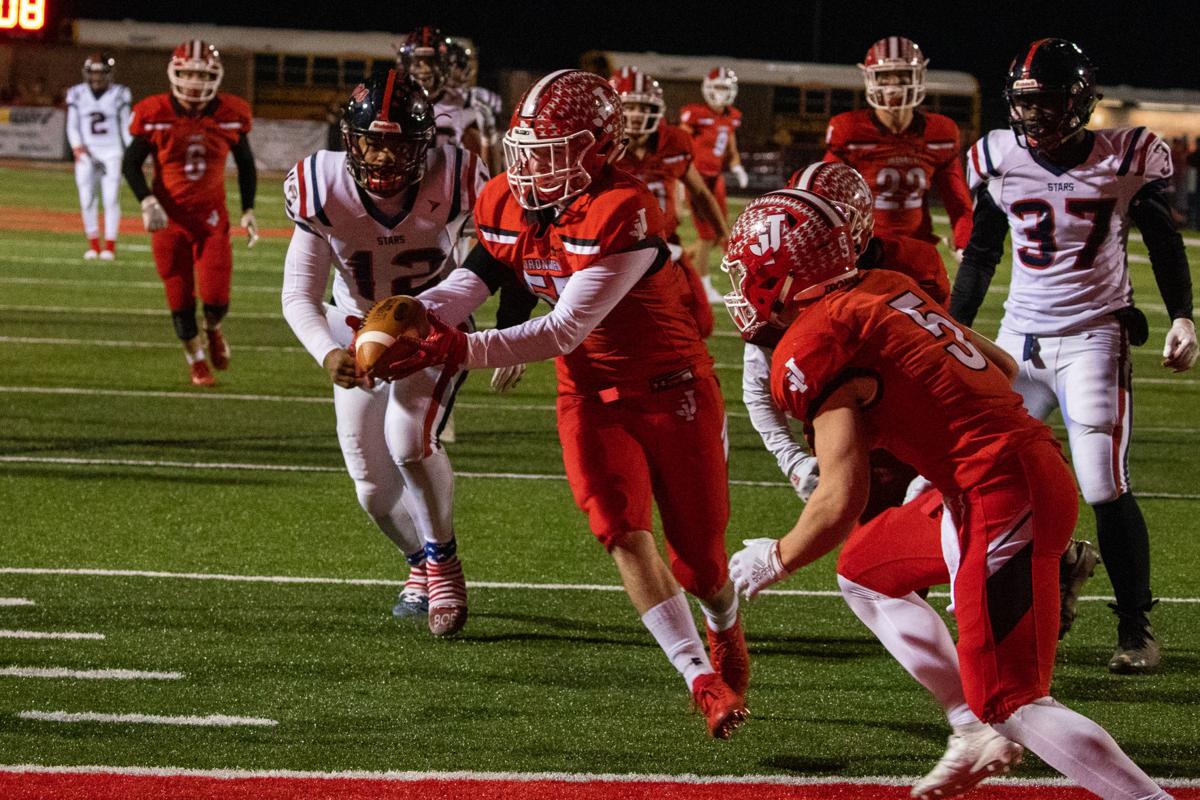 Jackson’s Grant Mastin (left) recovers a blocked punt by Jayden Spires (right) in the endzone for the touchdown in Jackson’s 70-28 victory over Centennial in a Division III playoff game on Friday. 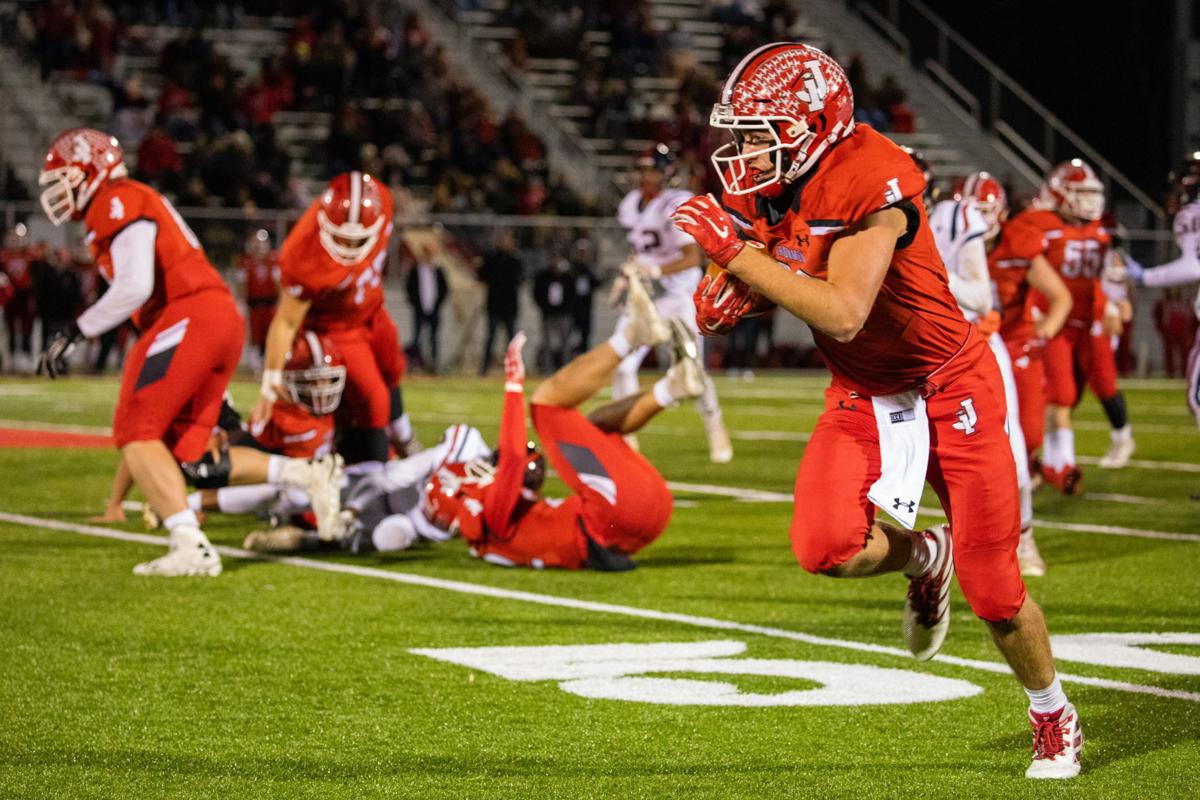 Jackson’s Brice Graham sprints up the left sideline for a 35-yard gain. Graham scored three touchdowns in the Ironmen’s 70-28 victory over Centennial in a Division III playoff game on Friday.

Jackson’s Grant Mastin (left) recovers a blocked punt by Jayden Spires (right) in the endzone for the touchdown in Jackson’s 70-28 victory over Centennial in a Division III playoff game on Friday.

Jackson’s Brice Graham sprints up the left sideline for a 35-yard gain. Graham scored three touchdowns in the Ironmen’s 70-28 victory over Centennial in a Division III playoff game on Friday.

Note: This sports recap appears in the Wednesday, Nov. 13 newspaper on Page B1.

JACKSON — Jackson may not have started out like it wanted, but once it got the train on the tracks, there was no turning back.

After being tied 14-14 in the second quarter, the Ironmen (11-0) exploded for 28 straight unanswered and continued the onslaught, sending a resounding message across Division III with a 70-28 victory over Centennial (9-2) on Friday.

The 70-point outburst also set a new school record for most points in a single game.

“This is an amazing feeling to set a new record,” junior tight end Treylan Davis said. “Honestly, I didn’t think that we were going to get it, and it’s even crazier that it happened in the playoffs and not the regular season.”

Jackson stuffed Centennial on its first drive to set up a short field, but on its second play, it fumbles and gave the ball back to the Stars.

The Stars capitalized as Jaylen Gilbert found Charles Dean on a 45-yard pass before being downed at the one-yard line. Gilbert punched it in on the next play for a 7-0 lead.

That served as a little wake up call for the Ironmen, and they answered. After Brice Graham busted out for a 35-yard gain, Jayden Spires found the endzone two plays later from 23 to tie the game.

“Playoffs are a completely different ball game,” Spires said. “It’s the last home game for us seniors so we wanted to go out on a high note. With everyone watching and supporting us, this was a great night for us to play the way we did.”

The Ironmen then came up with a stop in the form of a Jacob Winters interception. Spires led the charge down the field with two runs of 25 yard each, then Jared Icenhower reached paydirt from one yard out for a 14-7 lead.

However, the Stars weren’t going away that easily. They marched down the field, and Gilbert hit Dean on a slant for a 16-yard touchdown pass to tie the game at 14.

“I don’t think we came out with the right mindset or a level enough head,” Davis said. “We probably got a little ahead over ourselves and thought ahead to future weeks with the possibility of us going farther. It got us in the beginning and we weren’t playing as well as we usually do.”

Despite being in unfamiliar territory with the opposition, the Ironmen responded with grit and scored the next two touchdowns.

Icenhower on a rollout found Treylan Davis for a 23-yard strike before Graham scores from two yards out to put the Ironmen ahead 28-14 at the half.

“It all started with the guys up front for the blocking and giving Jared time to execute the play,” Davis said. “He threw a perfect pass, placed it right where it needed to be. Celebrating with the guys in the endzone, watching the coaches and the bench go insane, it’s one huge brotherhood and I’m thankful for them.”

With momentum fully on its side now, Jackson kicked things into high gear in all three phases of the game.

In a six-play sequence, Graham found the endzone for a 35-14 lead. Then Tristan Prater intercepted Gilbert’s pass on the first play for the Stars, which was followed by Icenhower hitting Davis for the 27-yard touchdown, their second of the game for 28 unanswered points.

After Centennial scored to cut the lead down to 42-21, Graham scored his third touchdown of the game to push the lead back up to 28 points.

“The offensive line did a heck of a job,” Graham said. “They’ve improved as a whole unit and this was just my night. But the team was making play after play in all three phases, which was awesome.”

It was time for the special teams to make a play, and Spires came through with a blocked punt that was recovered by Grant Mastin in the endzone for the touchdown.

From that point, Jacob Winters scored a running touchdown and Spires later scored to make history for the Ironmen.

“We’ve worked so hard in the offseason for this moment and it’s a great accomplishment,” Icenhower said. “It’s something that will go down in school history. For us, we’ll enjoy it for now but there’s more work to be done.”

Jackson advances to a Division III regional semifinal on Friday against Jonathan Alder, who defeated Sheridan 35-13. That game will be played at Teays Valley High School.

“It’s back to being 0-0 now,” Graham said. “This was a great win and we’ll enjoy it, but we take things one at a time. We’ll prepare hard, get back to work and go get it on Friday.”