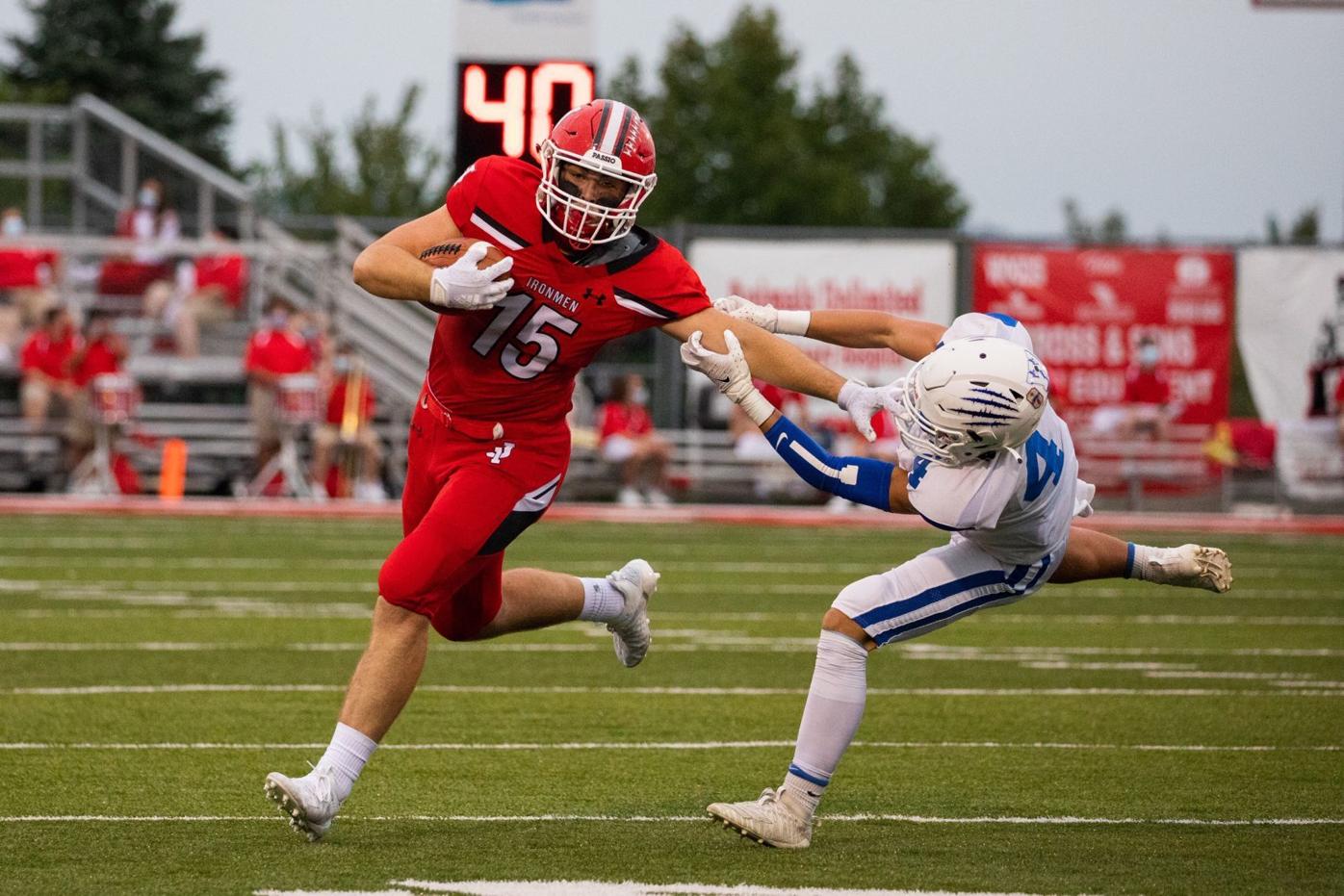 Jacksons Evan Spires stiff-arms a Washington defender. Spires finished with 71 yards and a touchdown in the Ironmen’s 40-7 victory over the Blue Lions on Friday. 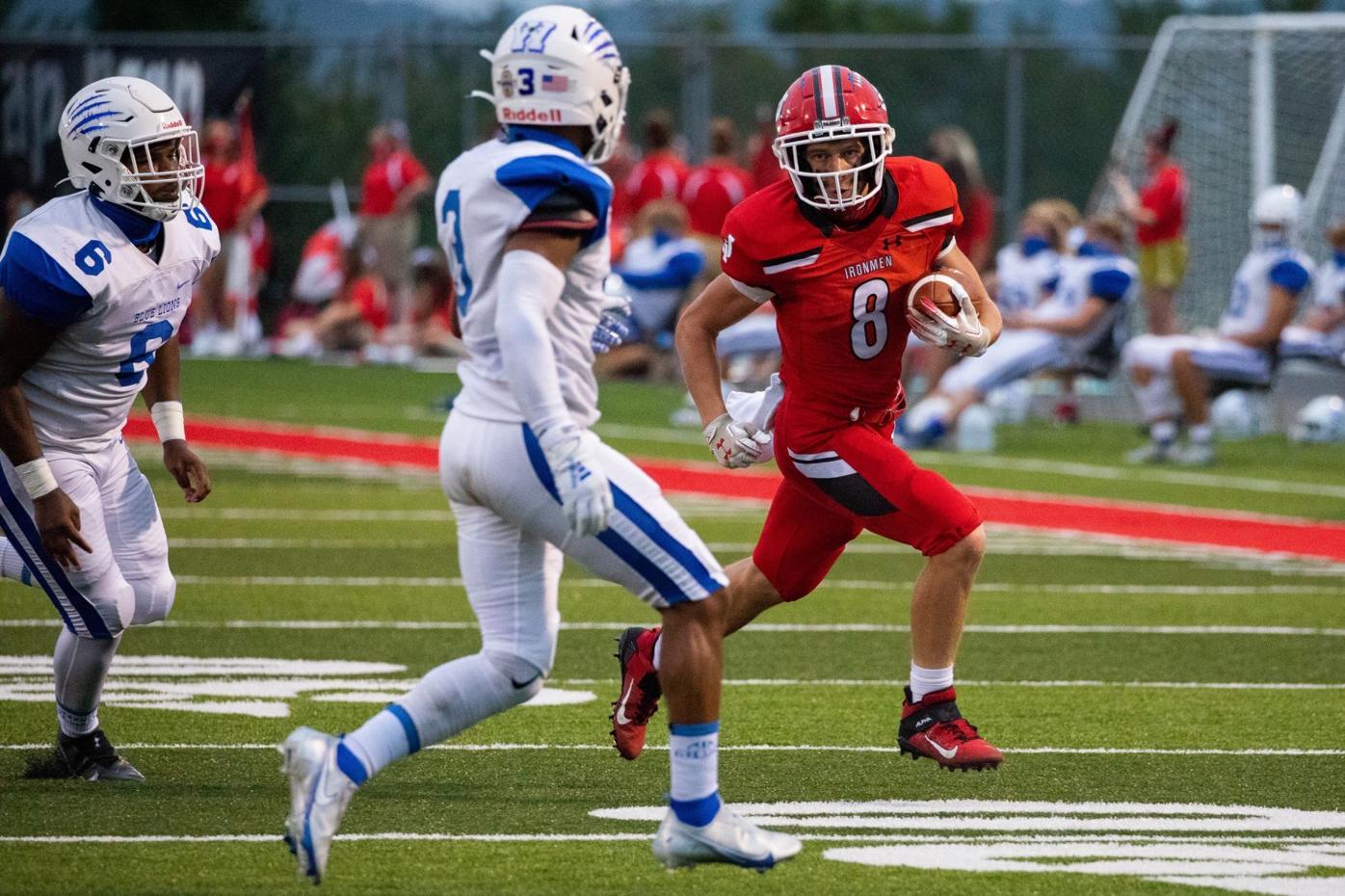 Jackson’s Cade Wolford hits the edge and sprints for a 16-yard touchdown. He finished with 43 yards and a pair of scores in the Ironmen’s 40-7 victory over the Blue Lions on Friday.

Jacksons Evan Spires stiff-arms a Washington defender. Spires finished with 71 yards and a touchdown in the Ironmen’s 40-7 victory over the Blue Lions on Friday.

Jackson’s Cade Wolford hits the edge and sprints for a 16-yard touchdown. He finished with 43 yards and a pair of scores in the Ironmen’s 40-7 victory over the Blue Lions on Friday.

JACKSON — It took less than one minute to realize that it was a complete mismatch.

Jackson had every tangible and intangible advantage over Washington, leading to a 40-7 victory over the Blue Lions on Friday.

However, even with scoring 40 points, the Ironmen didn’t look very sharp offensively, something head coach Andy Hall wasn’t too thrilled about.

“We looked sloppy on offense. I know scoring 40 points is great, but we left so many points and opportunities on the field,” Hall said. “We committed way too many penalties, missed too many assignments and reads; it just didn’t click for us and didn’t feel like a 33-point win.”

Even with the struggles at times, the Ironmen, much like last week against McClain, relied on a stout running game to get them by.

Jacob Winters put the Ironmen on the scoreboard first when he took the snap, faked the handoff and sprinted 16 yards to the endzone for a 6-0 lead.

“It was a called quarterback run, so I just wanted to make the play,” Winters said. “The goal for every single play is to get in the endzone and that’s what happened. I got a couple good blocks from the guys up front, made a move and kept going.”

Less than a minute later, Cade Wolford found the endzone on a one-yard plunge to make the score 12-0.

But Wolford had another one in him and scored on a 16-yard touchdown run to start the second quarter and put the Ironmen ahead 19-0.

“He’s starting to find a rhythm and make the most of his carries,” Winters said of his running back. “For being just a freshman, he’s a really good back and will only get better as the year goes. Jayden Spires was a great back for us last year, and now Cade has the next three years to be great. Having him and Evan (Spires) in the backfield with me takes a lot of pressure off.”

Later in the quarter, Jackson went for it on fourth down and Winters ran up the left sideline for a 30-yard gain. On the next play, Evan Spires found paydirt from three yards out for a 26-0 lead.

After being set up with a short field, Winters found the endzone again from three yards out to give the Ironmen a 33-0 lead into halftime.

Washington’s Trevin Downing and Jackson’s Hunter Webb exchanged fourth quarter touchdowns to round out the game.

The Ironmen outgained the Blue Lions 349-43 in the first half alone, and a big part of that was three turnovers the Ironmen forced.

Following the opening touchdown from Winters, the Blue Lions fumbled and Grant Mastin picked up the ball for a score, only to be tackled at the one-yard line, setting up Wolford’s touchdown.

“I saw the ball, picked it up and thought, ‘I’m going for the endzone’, but Washington recovered pretty quickly,” Mastin said. “I tried to make the best of it and put our offense in the best possible spot to score just in case I didn’t get to the endzone.”

Two Washington possessions later, it decided to go deep and hit Calum Brown in stride, but instead the ball ended up in the arms of Macon Perrill, his fourth interception of the season.

“Macon has been unbelievable this year in the secondary, including having two interceptions for a touchdown,” Hall said. “It’s to the point now he’s upset if he doesn’t score. But he’s elevated his game to a whole other level this year.

The final turnover came just before halftime when Washington’s Ethan Rodgers-Wright was sacked and fumbled into the arms of David Norris.

The recovery set up Winters’ second touchdown of the night.

“Our defensive staff put together a great gameplan and they deserve a ton of credit for that,” Hall said. “We didn’t blitz a lot because we wanted them to throw. Rodgers-Wright is a really good runner out in space so kept him boxed in and our secondary made life tough for them.”

Jackson is back at home on Friday against Miami Trace in a battle for first place in the FAC as both teams sit at 3-0 on the season.

“Miami Trace is a good, solid team all around with a really good running back,” Mastin said. “But it all a matter of us coming out, getting better everyday in practice and doing our jobs come this Friday. As long as we do that and execute, we’ll let the chip fall where they fall.”