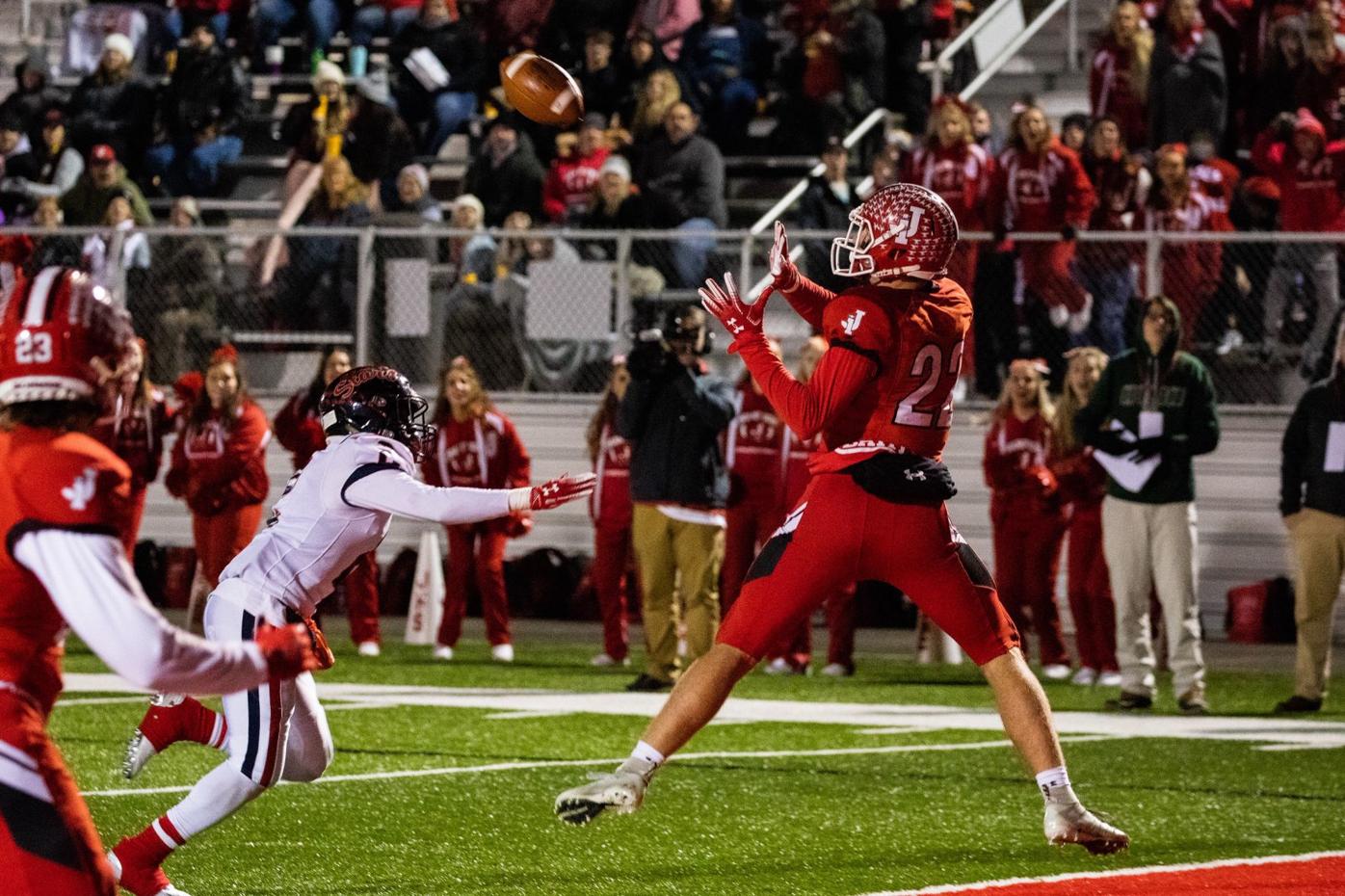 Jackson’s Treylan Davis hauls in a touchdown catch during the Ironmen’s playoff victory over Centennial. After decommitting from the University of Cincinnati, Davis gave his verbal commitment to continue his football career at West Virginia University. 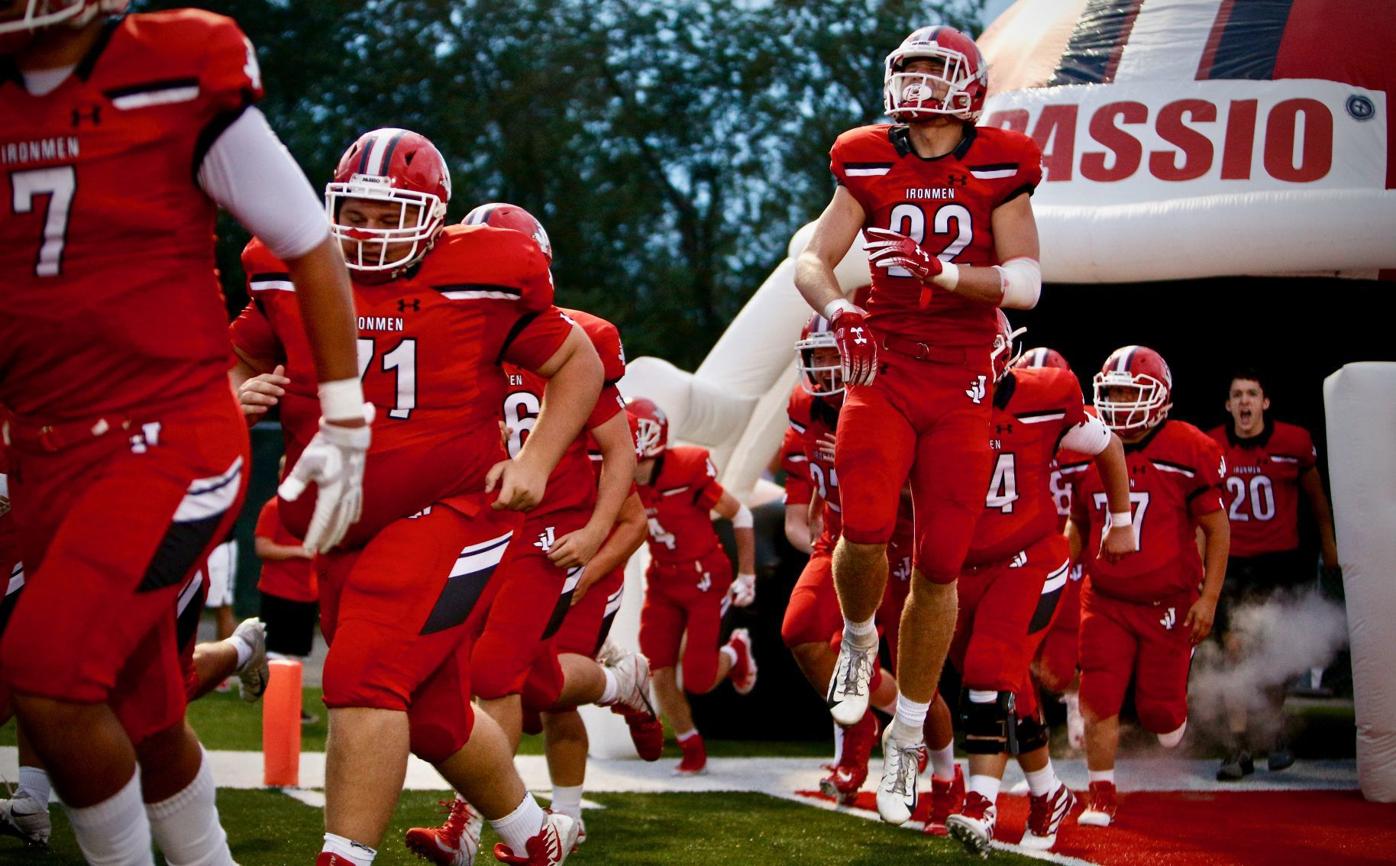 Jackson’s Treylan Davis (right) jumps up in excitement as the Ironmen opened their season against Wellston. Davis decommitted to the University of Cincinnati and chose to continue his football career at West Virginia University.

Jackson’s Treylan Davis hauls in a touchdown catch during the Ironmen’s playoff victory over Centennial. After decommitting from the University of Cincinnati, Davis gave his verbal commitment to continue his football career at West Virginia University.

Jackson’s Treylan Davis (right) jumps up in excitement as the Ironmen opened their season against Wellston. Davis decommitted to the University of Cincinnati and chose to continue his football career at West Virginia University.

JACKSON — Treylan Davis is no longer a secret.

Matter of fact, he’s rated as the No. 1 TE in the state for the class of 2021 according to ESPN recruiting.

“It’s a blessing, being seen as such a high level player has humbled me and opened my eyes in ways they have never been,” Davis said. “Hard work being noticed is a very honoring feeling.”

But with such talent as he has comes big choices, and he made a huge one recently that altered his football direction.

After committing to the University of Cincinnati back in February, he thought he was going to be Bearcat until more schools continued to offer him.

But this time, it wasn’t just Ohio or Toledo offering, it was Tennessee, West Virginia, Arkansas and other Power five schools across the Division I landscape.

That forced Davis to step back and reevaluate his decision. He ultimately decommitted from Cincinnati and the country roads have taken him to his new home as he committed to West Virginia University.

“I was given a lot of opportunities by some very prosperous schools, but West Virginia is genuinely what I fell in love with,” Davis said. “Getting on the phone with schools you used to watch on TV is simply a blessing and I’m thankful for it every day.”

“It was an absolute blessing to see all of the hard work and time sacrificed paying off,” Davis said. “Talking to coaches at the D-I level and building relationships with programs like that is just awesome, and I am thankful for every school that reached out to me.”

It also didn’t hurt that campus is just a few hours away, allowing him to be close enough that his family can still watch him play.

“My family and I are very familiar with WVU and Morgantown, as we have also done several virtual visits, which let us really get comfortable with it,” Davis said.

Snagging Davis for the class of 2021 is a big deal for West Virginia coach Neal Brown, who is entering just his second season at the helm for the Mountaineers. They finished 5-7 last season, and failed to qualify for a bowl game for the first time since 2013.

“Coach Brown is really something special,” Davis said. “He’s a very upfront and genuine guy which makes him really stand out. Our relationship continues to grow every day.”

With Davis on the field, the Ironmen have amassed a 26-9 overall record and never missed the playoffs. This past season as the Ironmen finished 11-1 as FAC champions and won their playoff game against Centennial.

But that was last season, and before becoming a Mountaineer, Davis has one final season left as an Ironmen. And it’s one in which he aims to show a lot of improvement as he’ll surely be one of the more featured players.

“This season I would love to be more explosive, a faster and more noticeable target in the passing game, and I want to continue to finish blocks as my coaches have always drilled into my game,” Davis said. “Personally, a goal for my next season is to be back-to-back undefeated outright FAC champions, and make a huge run into the state playoffs.

“I only have one more opportunity to earn as much respect for Jackson football so I will be doing anything and everything I possibly can this off-season and during season to provide for my guys and coaching staff. I want to build a brotherhood with these guys that will last a lifetime, be a leader on and off the field for everyone around me, and I want this year’s Jackson Ironmen to be known across the state as a threat on the field.”