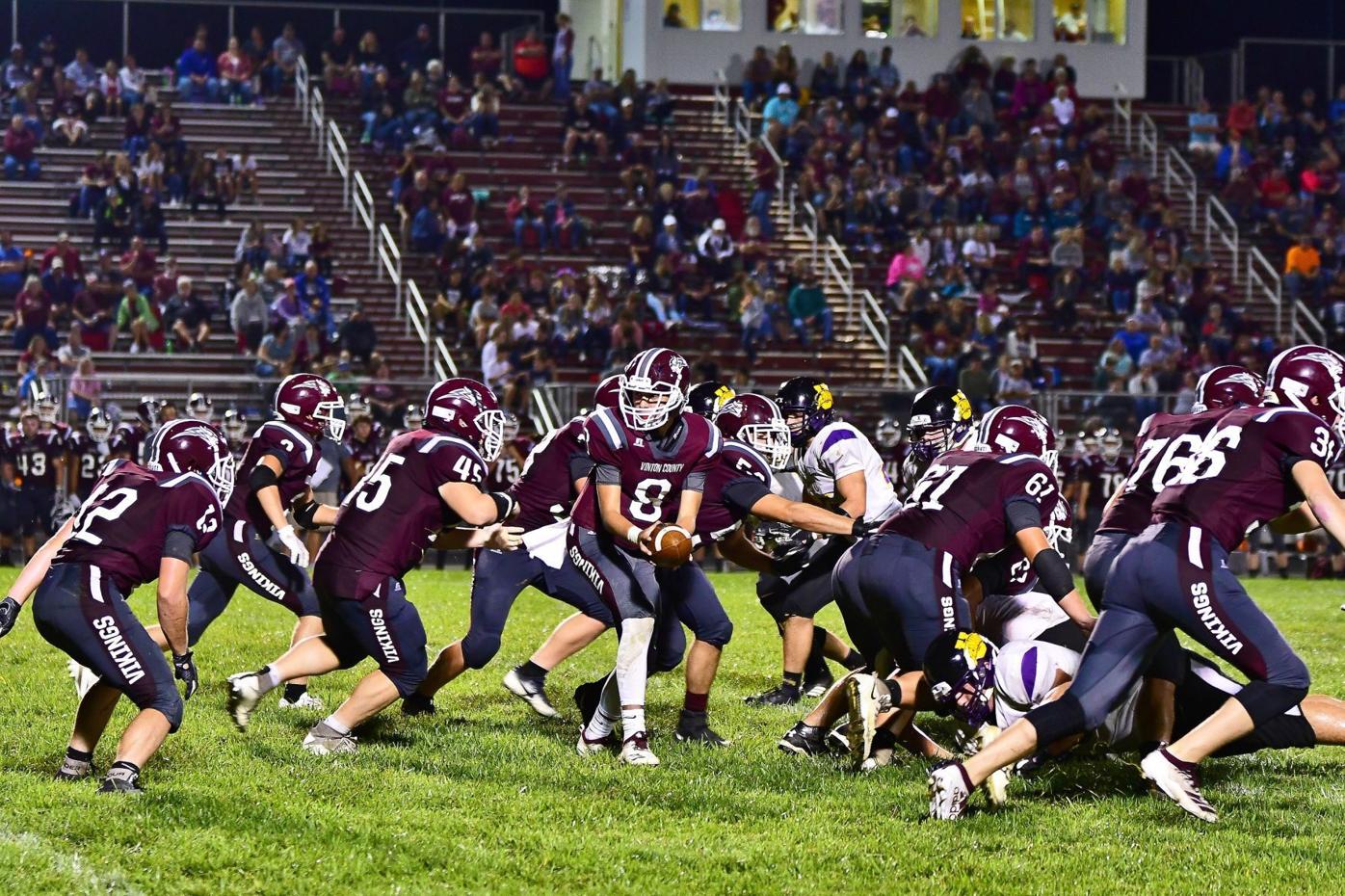 Vinton County’s Braylon Damron takes the snap and prepares to hand the ball off last season against Unioto. Now entering his junior year, Damron hopes to take another step forward as the Vikings aim for a winning season. 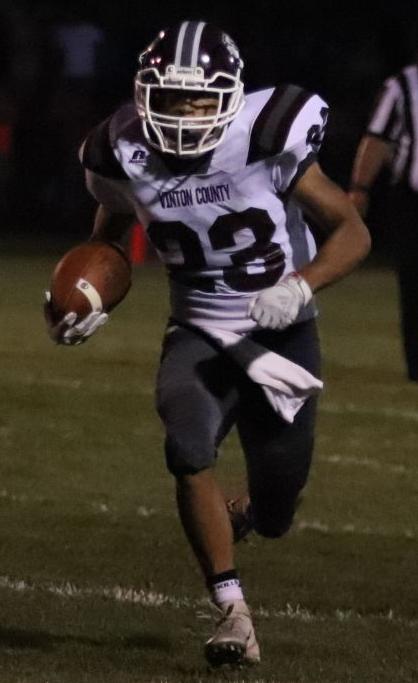 Vinton County’s Elijah Williams catches the screen pass and sprints up the left sideline against Fairfield Union last season. Williams and his speed return to the outside as the Vikings aim for a winning season this year.

Vinton County’s Braylon Damron takes the snap and prepares to hand the ball off last season against Unioto. Now entering his junior year, Damron hopes to take another step forward as the Vikings aim for a winning season.

Vinton County’s Elijah Williams catches the screen pass and sprints up the left sideline against Fairfield Union last season. Williams and his speed return to the outside as the Vikings aim for a winning season this year.

McARTHUR — Last season, Vinton County was just a couple plays away from making the playoffs for the first time since 2004.

But it suffered one-possession losses to Unioto and Athens early in the season before finishing 5-5 for the second time in three years.

Now reloaded with experience across the boards, Vinton County believes this is the year to return to prominence.

“A lot of our veteran players are back this year, and now that its year two in the system, we’re more physically and mentally ready,” Vinton County coach Travis Bethel said. “There’s been a lot of growth so far and guys are grasping the concepts and becoming more vocal leaders on the field so we’re ready for the season to get started.”

Braylon Damron returns to under center as QB1 for the Vikings, and although the system is geared more towards running, Bethel wants to see him elevate his game.

“He’s experienced now that he has 15 games under his belt, so we need him to take that next step in his development,” Bethel said. “It’s all about being more mentally ready, making smart decisions and cutting down on the turnovers. We’re not going to put everything on his shoulders, but we’re looking to see a more relaxed and confident player who can read defenses and attack a little better.”

Instead of relying on just two guys to handle most of the run responsibilities, the Vikings are going with a deeper running attack.

Guys such as Zayne Karr, Elijah Williams, Broc Moore, River Hayes and Codey Colley will all see action in the backfield.

Expect Karr and Williams along with Lance Montgomery, Aiden Graham and Ethan Martin make up the group of receivers on the outside.

“I’m not going to say we wont miss a beat because you can’t replace experience no matter what position its at,” Bethel said. “But I feel really confident about this group and the progress they’ve made. It’s just about finding that right formula that works in the backfield and on the outside.”

Doing the dirty work up front and creating those holes on the offensive line, Vinton County is fortunate to return four senior starters in Tim McManis, Bradley Congrove, Bommer Herold and Koby Waugh.

They’ll be joined by junior Jarrett Wells, as well as a number of guys returning who saw some action up front as well.

Those same those will be play both sides of the ball and make up the defensive line.

“We’re a tad smaller compared to last year, but this is the strength of our team and we’re more athletic and quicker,” Bethel said. “Having the experience up front really helps us push things forward and guys know what to do on their assignments. We’re going to be more physical and shoot through our gaps quicker.”

Zack Radabaugh, who has led the Vikings in tackles for the past two seasons, returns to linebacker along with Moore, Colley, Hayes, Graham and others.

Meanwhile, Williams, Karr, Montgomery, Damron all return to the secondary as corners and safeties.

“Defensively, we’re not as experienced as we are offensively, but I think our scheme allows us to be and play faster,” Bethel said. “Hopefully at least that will be the case after the first couple of games. We can see the improvement day by day and I like where we’re at, but now we have to show it on the field against competition.”

It’s been since 2004 that Vinton County has had a winning season and made the playoffs.

Although it’ll make the playoffs under the guidelines for football this season, the winning record part is what it wants to accomplish.

“Do we want to win the TVC? Absolutely, and that’s our goal,” Bethel said. “But more than anything, we want to be playing our best football come week six. We’ve been preaching a family atmosphere and playing for the guy on your left and right. We have a great group of kids and really good leadership, now it’s time to put it altogether on the field.”

Vinton County begins its season Friday at home against Meigs in TVC action.