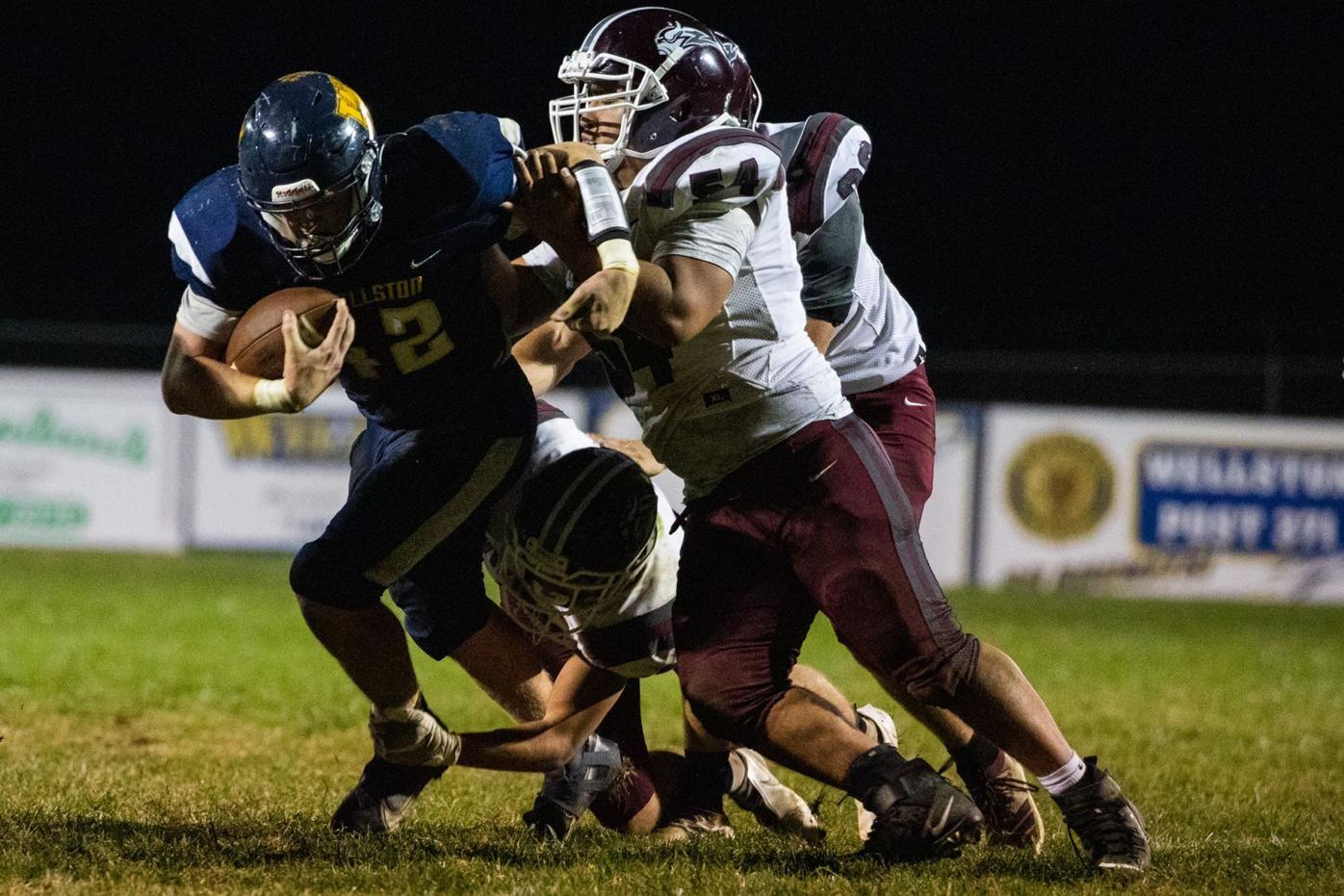 Wellston’s Jon Garvin runs and attempts to break three Vinton County tackles during the Golden Rockets’ 33-12 victory over the Vikings on Friday. 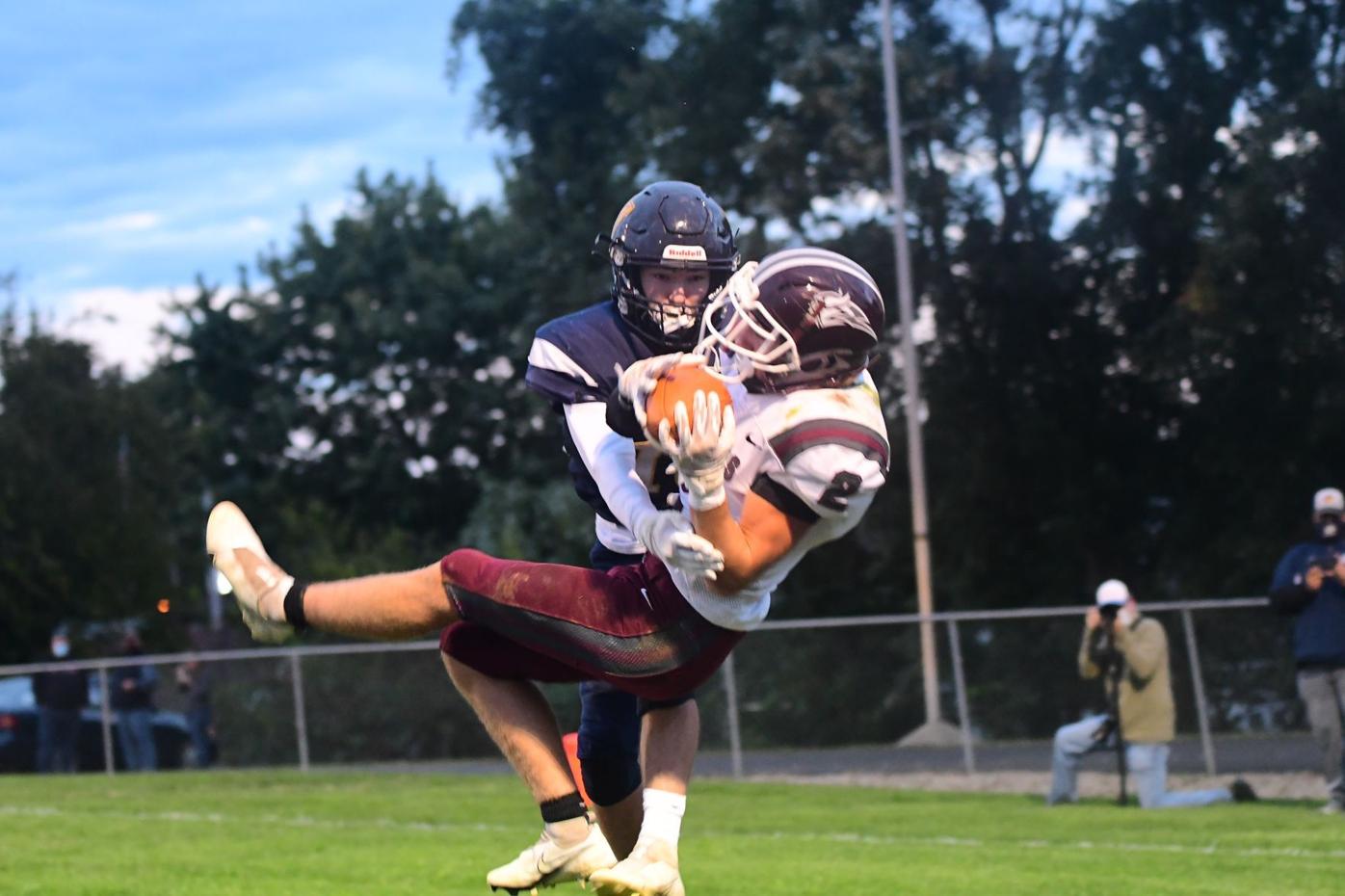 Vinton County’s Zack Radabaugh hauls in this 16-yard reception and is tackled at the 1-yard line during the Vikings’ 33-12 loss to Wellston on Friday. 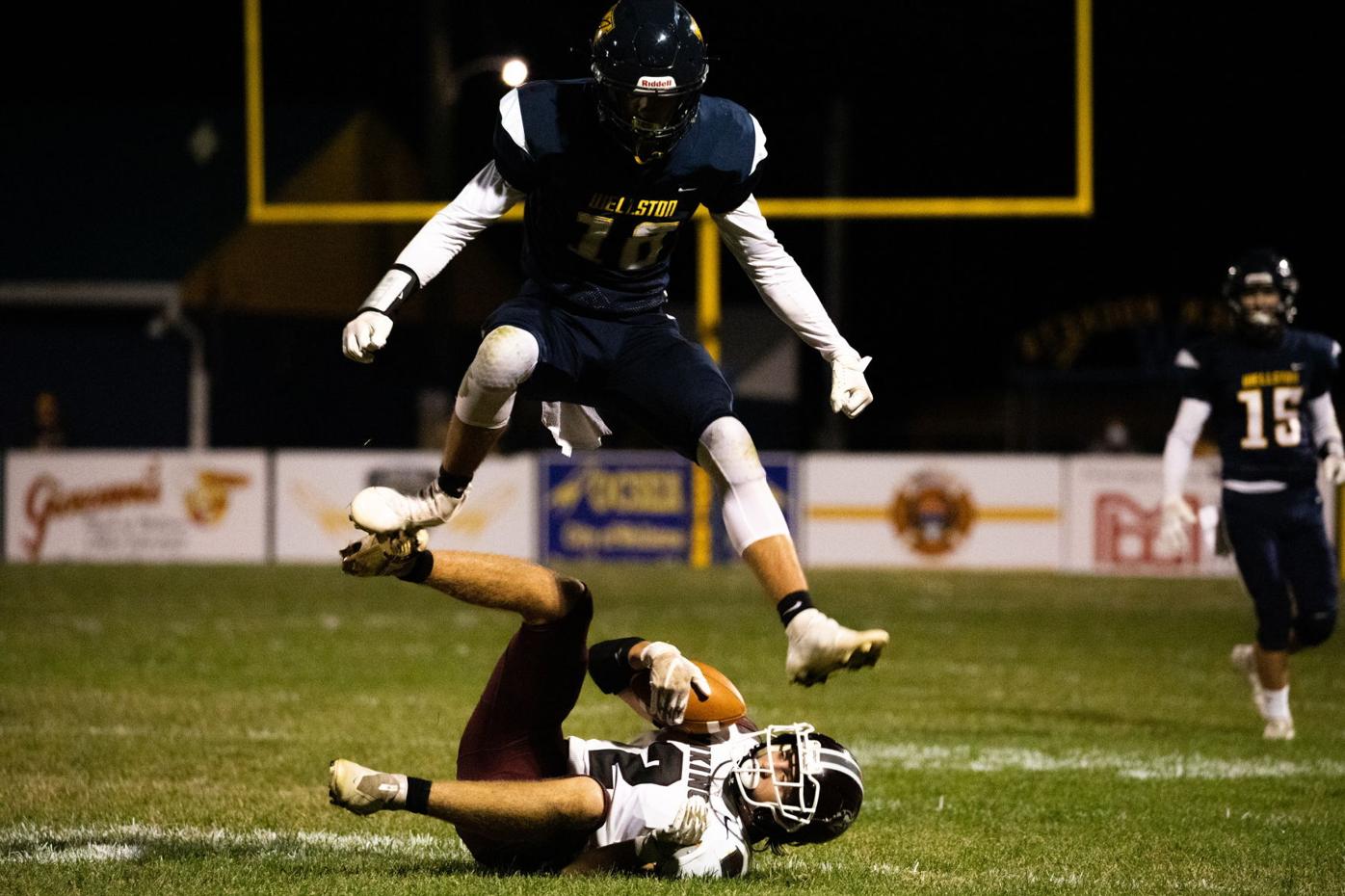 Wellston’s Hunter Smith tackles and jumps over Vinton County’s Zack Radabaugh during the Golden Rockets’ 33-12 victory over the Vikings on Friday.

Wellston’s Jon Garvin runs and attempts to break three Vinton County tackles during the Golden Rockets’ 33-12 victory over the Vikings on Friday.

Vinton County’s Zack Radabaugh hauls in this 16-yard reception and is tackled at the 1-yard line during the Vikings’ 33-12 loss to Wellston on Friday.

Wellston’s Hunter Smith tackles and jumps over Vinton County’s Zack Radabaugh during the Golden Rockets’ 33-12 victory over the Vikings on Friday.

WELLSTON — It remains to be seen how the TVC will handle crowning a champion this season since not every conference game was played.

But one thing is for certain, however it turns out, Wellston at least gets a share of the title.

Riding a perfect 3-0 record in TVC play, the Golden Rockets stuck to a stout running game behind Jon Garvin as they disposed Vinton County 33-12 on Friday.

In addition to clinching at least a share of the TVC, they also snapped an eight-game losing streak to the Vikings.

“Vinton County has always been a game that we just never showed up for, but we wanted to change that this year,” senior receiver Chase Ingalls said. “There’s always a lot of talk about this game and it provided a lot of fuel for myself and this team. We needed to end the losing streak to Vinton County and it’s good to have it finally come to an end.”

Ingalls had a huge part in Wellston’s victory by leading the defensive charge that finished the night by forcing five turnovers; three fumbles and a pair of interceptions.

Just by himself, Ingalls had an interception and a fumble recovery.

“The key was stopping Vinton County on first down, and preventing them from getting into space on their reverse counter trap play,” Ingalls said. “We knew we could stop them on a pass since they’re more of a running team so getting a push from the guys up front helped us lock them down.”

“They kept running the same plays one after another and they didn’t know what to do as we kept stopping them,” Garvin added. “We game planned all week for those same plays; counter trap, double reserve and power. We watched hours of film of those plays and made it a point to stop them.”

Jeremiah Frisby threw a 50-yard strike to Evan Brown, who was tackled at the 1-yard line. Garvin punched it in on the next play and added the two points for an 8-0 Wellston lead.

Vinton County responded on the following drive by marching 67 yards in nine plays, capped by a one-yard score from Broc Moore.

But the Golden Rockets had something the Vikings didn’t ... Garvin. The human bulldozer plowed his way into the endzone on the next two possessions from two and eight yards out to put the lead up to 20-6 at halftime.

“The line did a great job opening up holes and maintaining their blocks all night,” Garvin said. “I knew I needed to have a good game this week after struggling in the past couple of games. We couldn’t just rely on the pass so I had to do my part and we ran over Vinton County all night.”

Vinton County received the second half, but fumbled on its first play from scrimmage and Ingalls recovered the ball.

Three plays later, Ingalls got loose and Frisby found the senior receiver in the back of the endzone for the 18-yard touchdown, putting Wellston ahead 26-6.

“It was a designed corner route, I saw both the corner and safety bolt for the corner towards Hunter (Smith) on the left side of the field,” Ingalls said. “It was triple coverage, so I just found the open hole, Jeremiah looked right at me down the field and threw a perfect ball to me.”

The Golden Rockets put the final stamp on the game as Isaac Molihan took the design quarterback run and scampered 22 yards to paydirt.

Vinton County scored the final points of the game on a 65-yard fumble recovery by Codey Colley.

“One of our goals this season was to win the TVC and here we are undefeated in the league,” Garvin said. “Now it’s one game at a time as we enter the playoffs. We’re lucky to have a home playoff game right, which is something that hasn’t been done in a long time, if ever. We’re going to enjoy this ride for how ever long it lasts.”