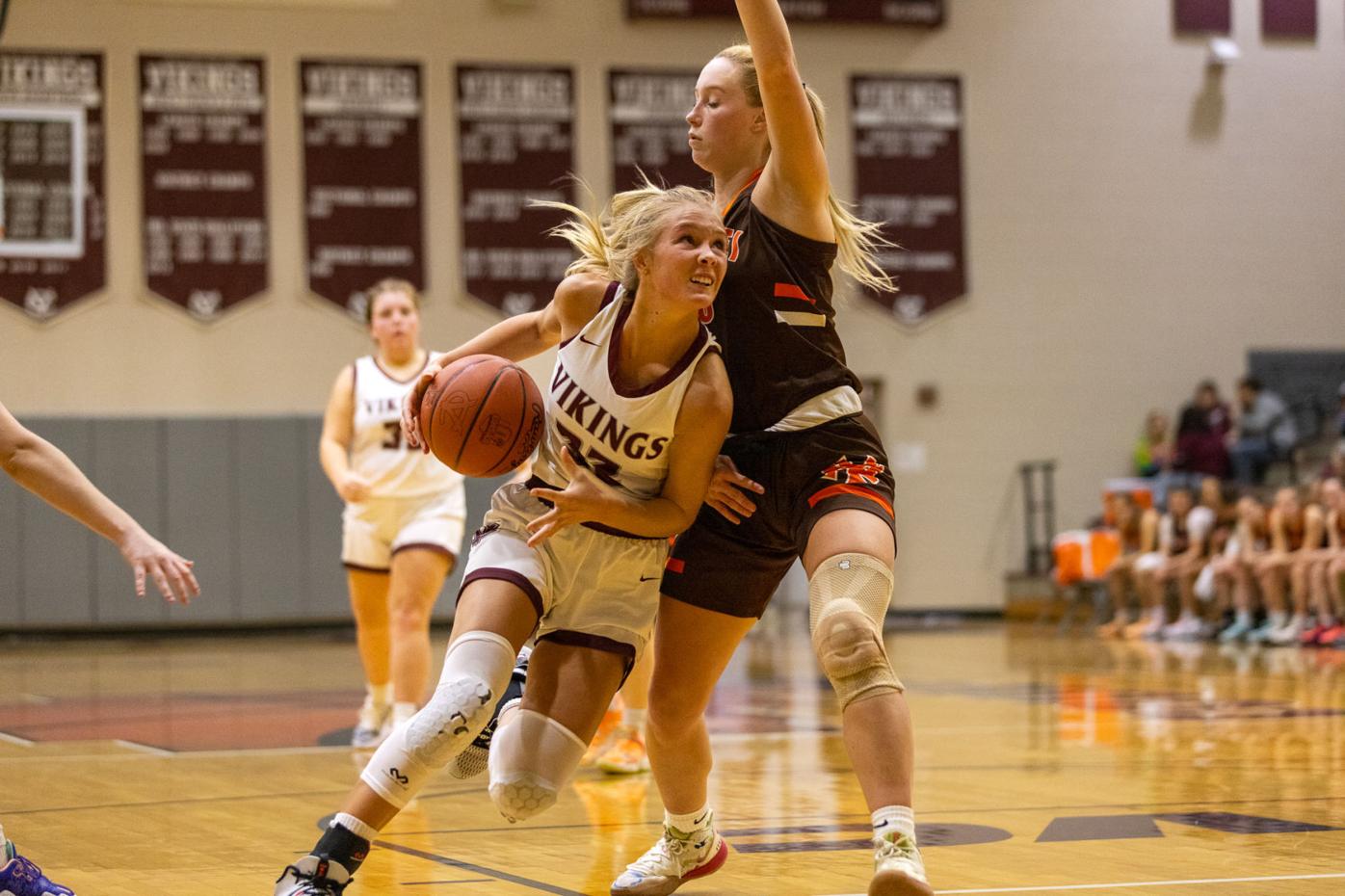 Vinton County’s Cameron Zinn drives the ball to the basket against Nelsonville-York’s Mackenzie Hurd during the Vikings’ 48-39 loss in TVC action on Thursday. 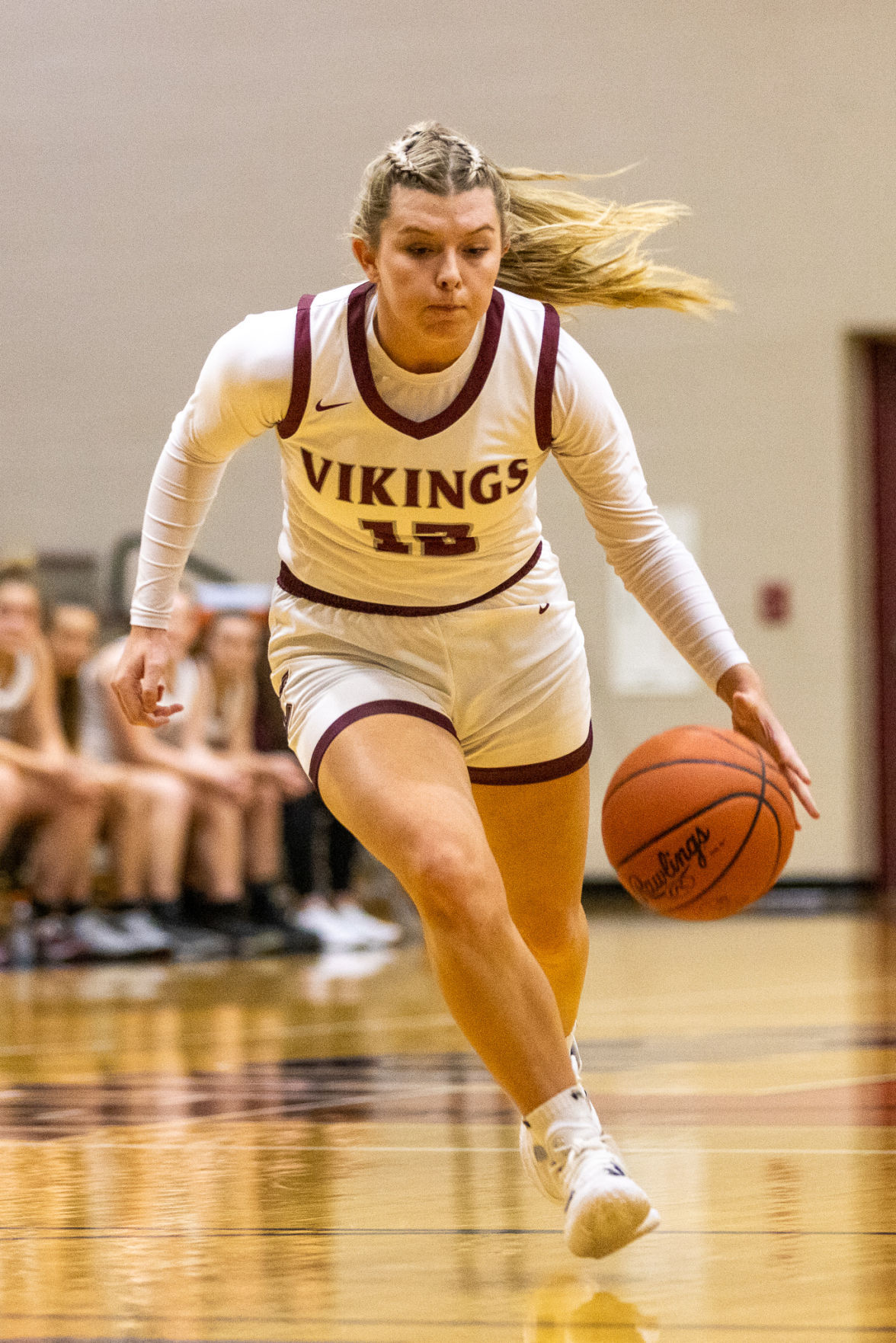 Vinton County’s Tegan Bartoe dribbles and attacks the basket during the Vikings’ 48-39 loss to Nelsonville-York in TVC action on Thursday.

Vinton County’s Cameron Zinn drives the ball to the basket against Nelsonville-York’s Mackenzie Hurd during the Vikings’ 48-39 loss in TVC action on Thursday.

Vinton County’s Tegan Bartoe dribbles and attacks the basket during the Vikings’ 48-39 loss to Nelsonville-York in TVC action on Thursday.

McARTHUR — When the dust settles on Thursday night inside Vinton County High School, there is a new top dog in the TVC.

And it wasn’t the Vikings.

For the first time in 19 TVC games, the Vikings found themselves on the losing end of a conference battle, falling 48-39 to Nelsonville-York.

“We definitely got the looks we wanted on the floor, but at the same point, I felt we could have been a little more patient at times,” Vinton County coach Brett Jones said. “We shot the ball 28 times more than Nelsonville did, but we didn’t convert and that’s basketball sometimes. When things aren’t going right, you tend to rush to try and make up the deficit as quickly as possible, but we couldn’t respond.”

Coincidentally, it was also the Buckeyes who handed the Vikings their previous TVC loss two seasons ago, connecting on a shot with less than three seconds left to secure the win.

This time around was much different. The Buckeyes were healthy, and the Vikings shot just 17 percent from the floor.

“It doesn’t get much better than getting a shot attempt two feet from the basket, but it just wasn’t going to fall,” Jones said. “It wasn’t outcome we wanted, but we’ll keep working and hopefully some of those shots start falling.”

Vinton County started the game with a triple from Tegan Bartoe, but then missed its next 14 shots.

Meanwhile, Nelsonville-York wasn’t having much better luck as it was either missing shots or committing turnovers.

Then both teams traded runs. Vinton County went 7-0, and the Buckeyes went 5-0 to end the frame with the Vikings ahead 10-9 after the first.

The Buckeyes behind Alivia Speelman opened up the second on a 6-0 run before Rylee Ousley buried the triple to cut the lead down to 15-13.

That shot from Ousley was followed by six straight points by the Vikings to cap a 9-0 run and retake the lead 19-15.

Yet, the momentum was short lived as the Buckeyes powered ahead on an 8-0 run featuring Airah Levy to own a 23-19 lead before heading into halftime ahead 23-22.

“We compete tough, and Nelsonville is a really good team,” Jones said. “The fact that we got as many shots as we did tells me that we were battling hard and winning the battles on the offensive glass. Just need to finish better.”

With Vinton County shooting just 7-of-32 overall from the floor, being down by just one point felt like a huge win. However, the cold streak wasn’t over with.

Whether it was 20-foot shots, or 2-foot shots, the ball simply was not going to caress nylon for the reminder of the night.

That allowed NY to get out in transition, and MacKenzie Hurd began to put her fingerprints all over the game.

Scoring, rebounding or assisting, she repeatedly put one dent after another into the Vikings until finally cracked.

Hurd and company outscored the Vikings 14-4 in the third, busting open a double digit lead at 37-26 — one that the Vikings simple didn’t have enough firepower to answer back in the fourth.

“There’s no quit in this team, and I’m proud of that,” Jones said. “But it’s a long season, there’s still a lot of basketball to play and we’ll get things figured out.”