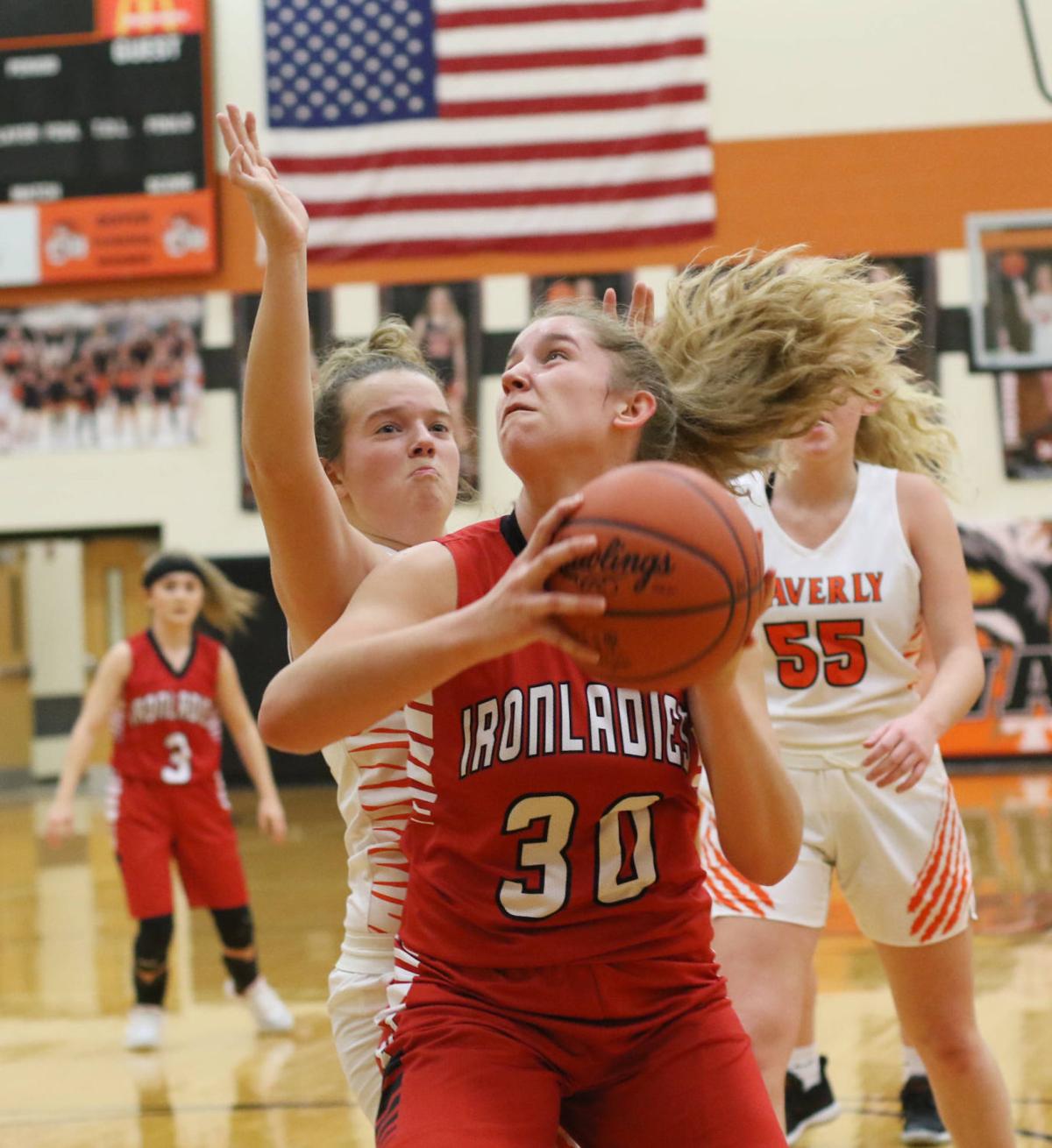 Jackson’s Bronwyn Nelson (30) finished with a team-high 11 points in the Ironladies’ 47-30 loss to Miami Trace in FAC action on Saturday. 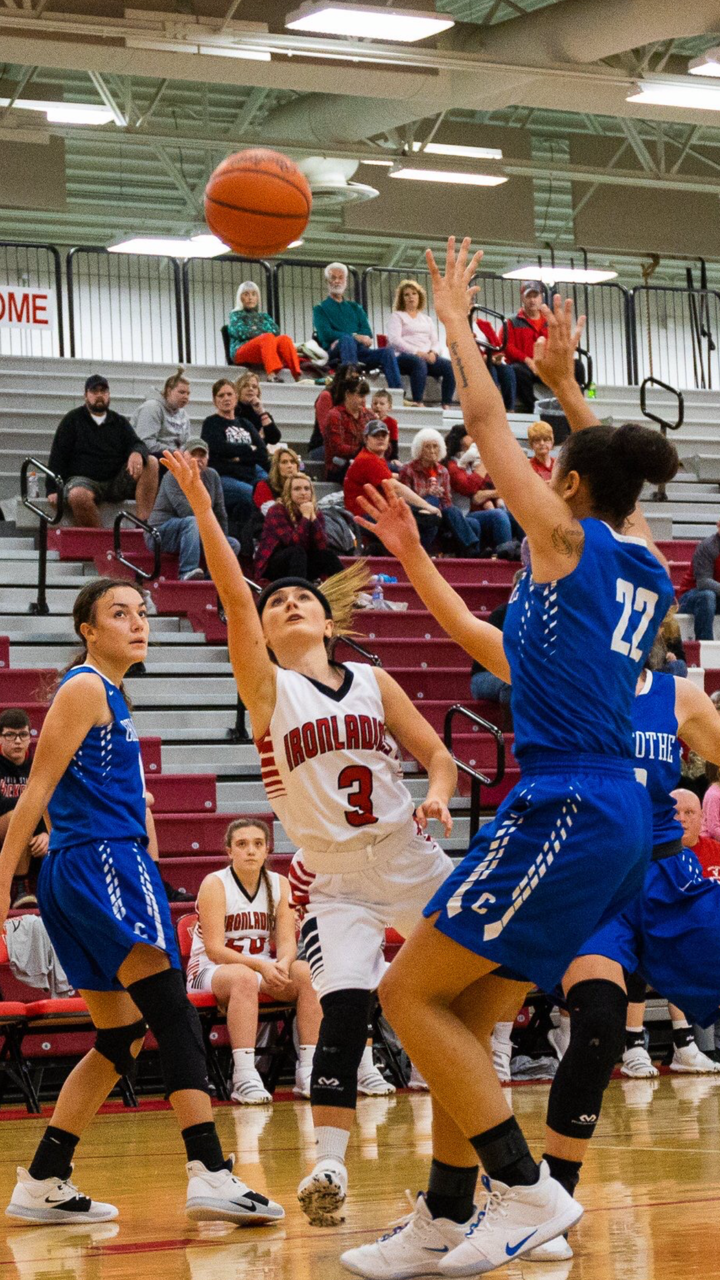 Jackson’s Katelyn Webb goes for the layup between Chillicothe’s Shawnice Smith (right) and Jacey Harding (left) earlier this season. Webb finished with 10 points in the Ironladies’ 47-30 loss to Miami Trace on Saturday.

Jackson’s Bronwyn Nelson (30) finished with a team-high 11 points in the Ironladies’ 47-30 loss to Miami Trace in FAC action on Saturday.

Jackson’s Katelyn Webb goes for the layup between Chillicothe’s Shawnice Smith (right) and Jacey Harding (left) earlier this season. Webb finished with 10 points in the Ironladies’ 47-30 loss to Miami Trace on Saturday.

Note: This sports recap appears in the Wednesday, Jan. 15 newspaper on Page B4.

JACKSON — In both matchups against Miami Trace, halftime has been Jackson’s biggest nightmare.

While halftime is typically seen a chance to readjust and catch your breath, it’s had the complete opposite effect for the Ironladies.

Despite trailing by single digits in the third quarter, the Panthers (8-5, 5-1 FAC) had too much depth and firepower inside as they pulled away for the 47-30 victory on Saturday.

“No coach or player is ever happy about a loss, but this was the best effort we’ve played in any game for 32 minutes,” Jackson coach Matt Walburn said. “Defensively we boxed out well, hustled for loose balls and that’s all I can ask for as a coach. Miami Trace just had more depth than we did in the fourth but we competed hard and gave ourselves a chance.”

Round two was much similar to how the first game played out. Close game at halftime, then Miami Trace switched up defensively in the third by applying the pressure.

It dialed things up by double teaming Jackson point guard Katelyn Webb to take the ball out of her hands and forcing other players to beat the Panthers.

The Ironladies (1-10, 1-5 FAC) stepped up to the challenge, but some missed shots at key moments zapped what energy they still had in the final minutes of the game.

“Miami Trace was running a zone press defensively, but it had some man-to-man principles as well,” Walburn said. “They were letting Katelyn catch the ball but got right on her once the ball hit her hands. We switched a couple things offensively to help take that pressure off of her and it worked for a little bit, but once Miami Trace caught on, they were like wolfs to raw meat.”

Jackson’s Bronwyn Nelson shouldered much of the offensive load out of the gates as Miami Trace has trouble stopping her on the inside.

She scored six of the team’s eight first quarter points as Miami Trace and Jackson were tied 8-8 after the frame.

“(Miami Trace coach) Ben (Ackley) is a great coach and good guy, but even he was getting frustrated with his team,” Walburn said. “He took his entire starting five out and inserted five new players, which I took as a tip of the cap to us because they were having trouble defending us.”

However, the next quarter wasn’t very kind towards Jackson. Seemingly playing with a lid on the basket, shots from any and all ranges weren’t falling while the Panthers took advantage.

However, the advantage wasn’t as fruitful as they outscored the Ironladies 9-0 and took a 17-8 lead into the break.

“That’s just how it is sometimes with us,” Walburn said. “We’re not a great shooting team so there are times we’ll go scoreless in a quarter, but yet it was still single digits so we’re right there. We didn’t change too much because we liked what we were doing, it just a matter of getting shots to fall now.”

Jackson continued to hang around and keep the game in single digits, but Miami Trace’s Margarah Bloom buried back-to-back triples to push the lead up to 28-16, a double digit lead that won’t be surrendered for the rest of the night.

“These kids work hard, and it’s tough for us putting in the work but not seeing the results from a winning satandpoint,” Walburn said. “We continue adjusting game by game, and I’m seeing the improvements these girls have made every single practice. I like how we’ve grown and keep fighting despite being overmatched in some games. We’ll get back at it and hopefully be able to rack up a couple wins.”

Nelson finished with a team-high 11 points, followed by Webb with 10 points.

The Ironladies return to action on the road Wednesday against FAC foe McClain, Saturday at home against Hillsboro and Tuesday at Vinton County.