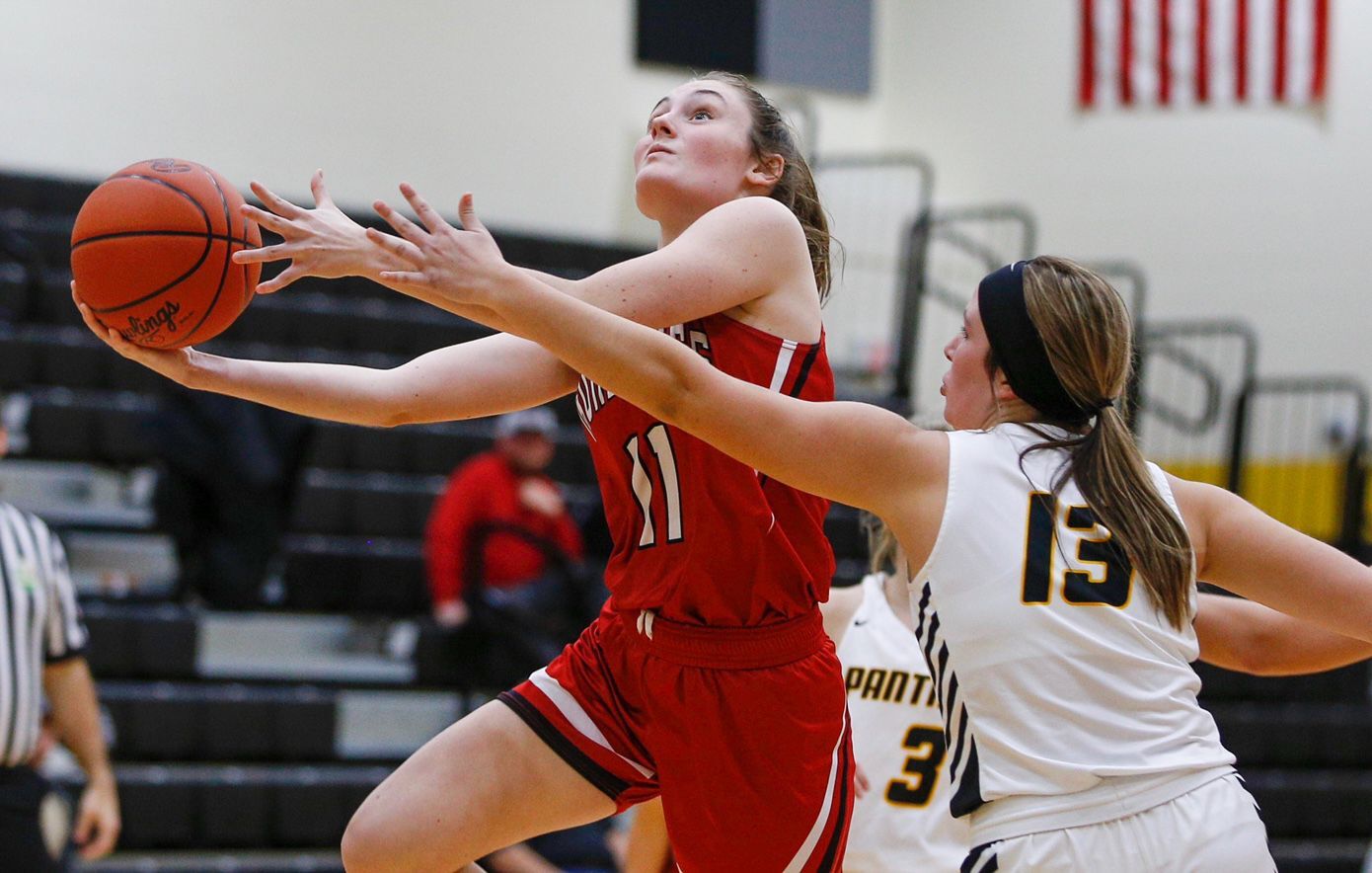 Jackson’s T.J. Carpenter converts the tough bucket past Miami Trace’s Libby Aleshire in the Ironladies’ 42-39 loss to the Panthers in FAC action. 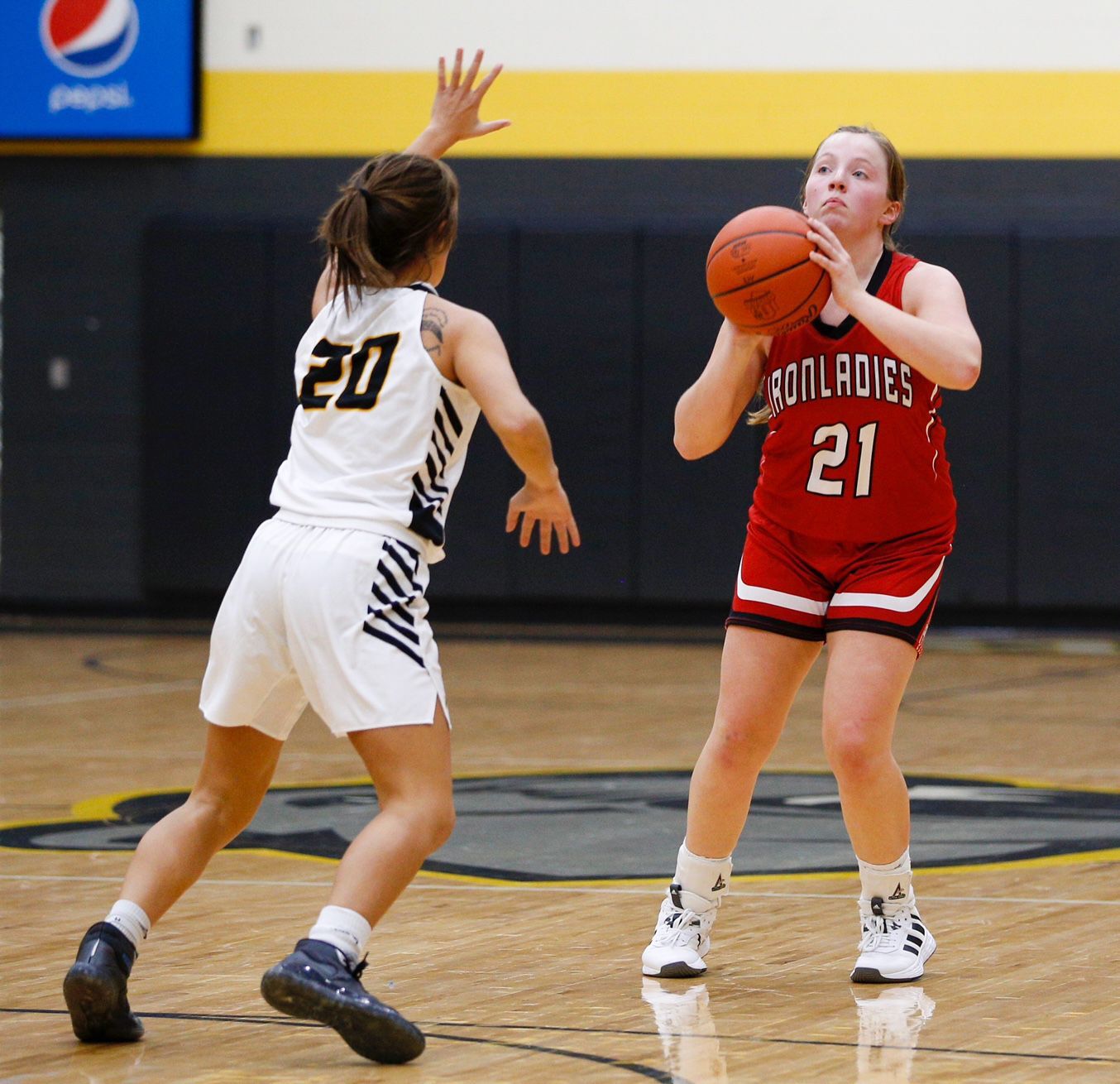 Jackson’s Sydney Hughes shoots the ball from distance during the Ironladies 42-39 loss to Miami Trace in FAC action.

Jackson’s T.J. Carpenter converts the tough bucket past Miami Trace’s Libby Aleshire in the Ironladies’ 42-39 loss to the Panthers in FAC action.

Jackson’s Sydney Hughes shoots the ball from distance during the Ironladies 42-39 loss to Miami Trace in FAC action.

Miami Trace’s sharpshooting combo put on a first quarter clinic, hitting four consecutive 3’s before visiting Jackson could blink. And without that start, the Panthers wouldn’t have been in the win column.

Jacobs and Stewart’s white-hot entrance paced the way to a 42-39 win over the Ironladies in Frontier Athletic Conference action — a victory in which Miami Trace (2-3, 2-0 FAC) held a late double-digit lead before staving off a furious comeback attempt.

“Early on, we shot the ball extremely well. Then, as the game went on, the ball got a little cold,” Miami Trace coach Kayla Dettwiller said. “But give Jackson credit. They did a nice job adjusting and using their size against us. But late in the game, when we had to dig deep, we got kids in positions that needed to get the ball. We were able to work some time off the clock and limit Jackson’s possessions.”

Jackson (1-2, 1-1 FAC) was unable to limit Jacobs’ production from all angles. The junior finished the night with team-highs of 17 points, six rebounds and four assists.

When her teammates needed her the most, she was there to answer the bell on each occasion.

“Being a three-year varsity player and starting on and off as a freshman, we’ve got a lot of trust in [Jacobs]. She has a lot of experience in big situations,” Dettwiller said. “A lot of times, our kids look to her to settle them down. When we get sped up a little bit, she gets us back under control.”

Jacobs made her first deep splash just 17 seconds in the action before Jackson’s T.J. Carpenter — who was also magnificent all night long — got the Ironladies on the board.

“When [Stewart] is on, it’s phenomenal,” Dettwiller said. “That kid puts up shot after shot. She’s out in the barn and lights it up. And she’s not just a shooter. She can drive and she can get downhill. So we’re still working on developing her game in other aspects as well.”

Carpenter then hit two free throws to bring the deficit back to within six but the Panthers got a fifth 3 from Hillary McCoy and a bucket from Jacobs with 25.3 seconds remaining to take a 17-6 lead into the second.

However, after shooting 5-for-8 from deep in the first quarter, MT shot just 1-for-16 from behind the line throughout the rest of the game.

“We did a nice job of getting switched off, especially when [Jackson] was running that dribble-drive,” Dettwiller said. “Our kids were doing a nice job of getting that switch off the screen. We kept them from driving into the paint and allowing their bigs to get open. We had a couple of miscues in that second quarter but I think we adjusted better to body them out.”

The two teams traded blows throughout the second quarter but the Panthers held their 11-point lead intact at halftime, 27-16.

In the third, the Ironladies started to make their move.

Carpenter was a one-woman wrecking crew, scoring twice to begin the third and to cut MT’s lead to 27-20. However, the Panthers ripped off a 6-0 run, courtesy of Jacobs, Mallory Lovett and Libby Aleshire, extending the lead to 33-20 with 3:52 left.

Jackson, however, would answer with a 5-0 run of its own to close the quarter, sending the game into the fourth with Miami Trace leading 33-25.

The Ironladies started the fourth with a bucket from Carpenter and two foul shots from Kenzie Davis, closing the gap to 33-29. Jacobs then hit her biggest 3 of the night, making it 36-29. But Carpenter and Davis bullied their way to a 7-4 run, bringing Jackson to within four at 40-36 Sydney Hughes drained a 3 with less than a minute to play, making it 40-39.

With the Panthers clinging to a late lead, Jackson forced a turnover, was fouled and was awarded three consecutive foul shots with under 10 seconds to play. The Ironladies missed all three, giving way for McCoy to produce the night’s final with two freebies on the other end.

Jackson was led statistically by Carpenter, who turned in a double-double of 16 points and 10 rebounds. Davis followed with 11 points and seven boards while Hughes had six points.