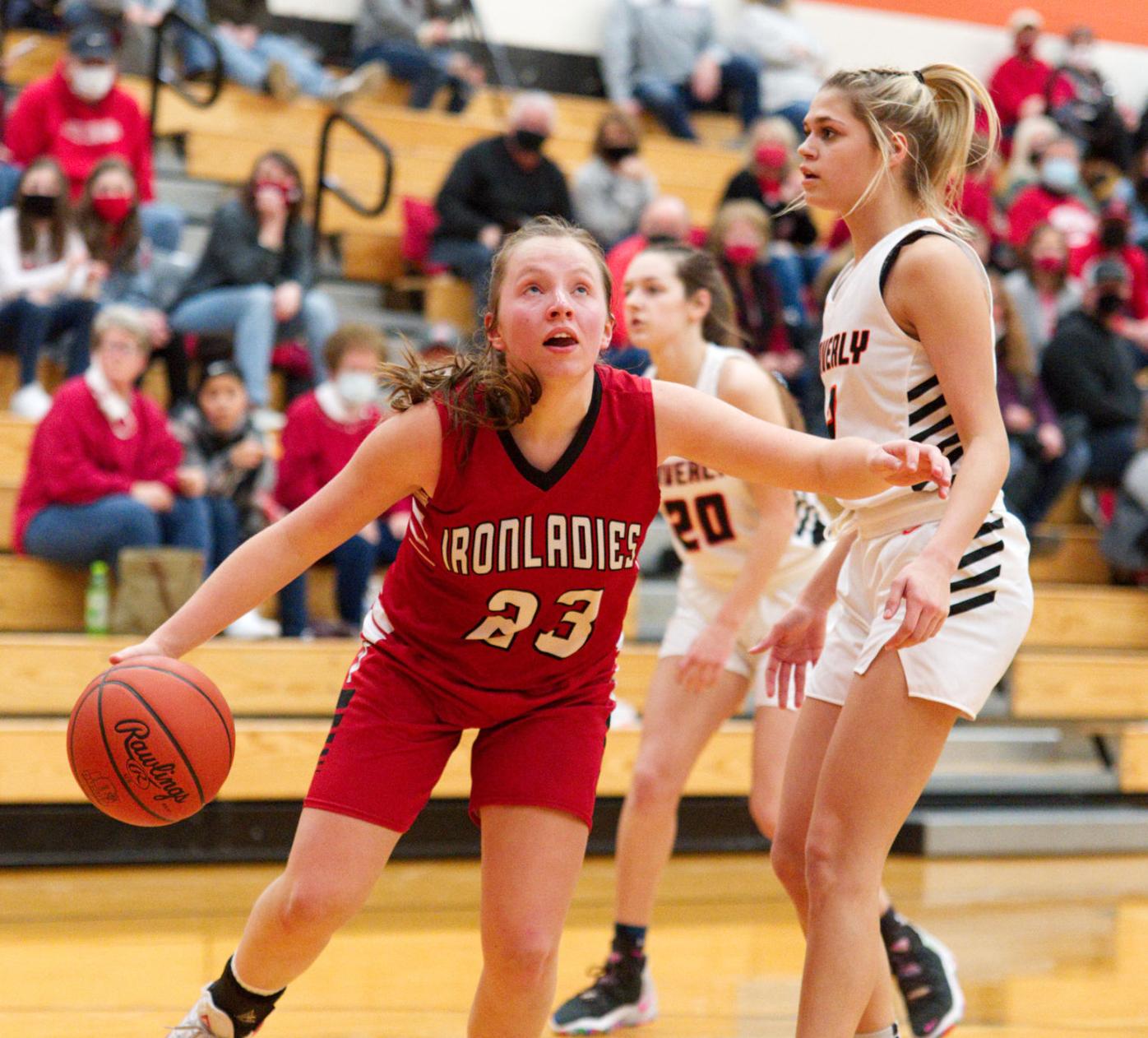 Jackson’s Sydney Hughes eyes the basket while being defended by Waverly’s Carli Knight in the Ironladies’ 53-38 loss in a Division II sectional final on Friday. 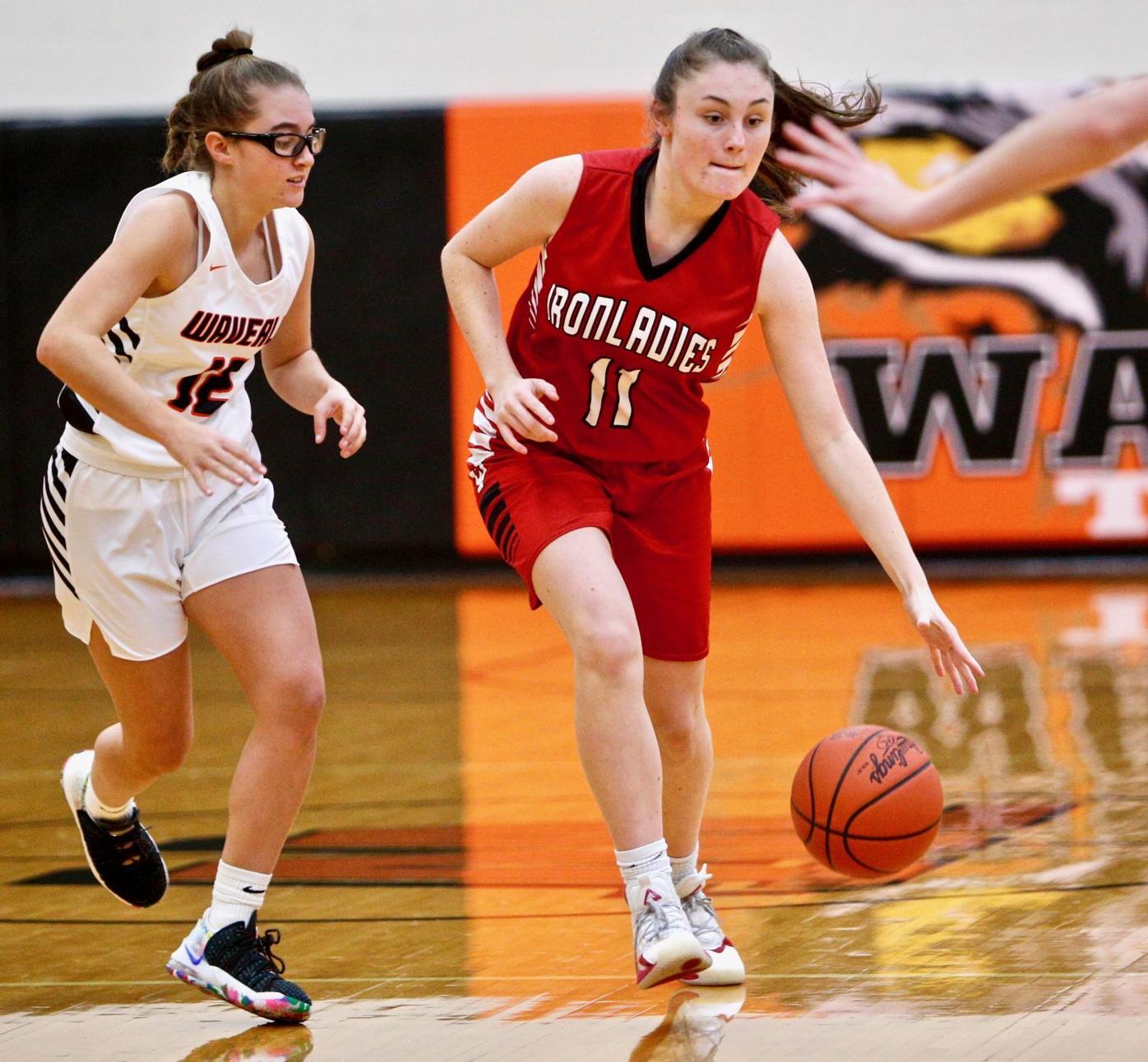 Jackson’s T.J. Carpenter dribbles past Waverly’s Michaela Rhoades in the Ironladies’ 53-38 loss to the Tigers in a Division II sectional final on Friday.

Jackson’s Sydney Hughes eyes the basket while being defended by Waverly’s Carli Knight in the Ironladies’ 53-38 loss in a Division II sectional final on Friday.

Jackson’s T.J. Carpenter dribbles past Waverly’s Michaela Rhoades in the Ironladies’ 53-38 loss to the Tigers in a Division II sectional final on Friday.

WAVERLY — Jackson seemingly had Waverly right where it wanted it.

But it let Waverly’s Paige Carter get loose midway in the third quarter, and the Ironladies didn’t have a counterpunch to offset the destruction she was causing.

Waverly’s senior forward scored 22 of her game-high 23 points, including career point No. 1,000 as the Ironladies’ season came to an end with a 53-38 loss in a Division II sectional final on Friday.

“We had spurts that really hurt us and we got into a bit of foul trouble that came back to get us,” Jackson coach Matt Walburn said. “We grew up a lot from the first time we played Waverly which was our fifth game of the season, but we didn’t shoot well and lost to a better team. We’ll learn from it and grow from it in the offseason.”

Jackson (10-12) jumped out to a quick 5-0 lead following a bucket from Mattie Walburn and a triple by Sydney Hughes. However, Waverly countered with an 11-2 run behind a pair of buckets from Ava Little and Kelli Stewart to take an 11-7 lead after the first quarter.

The ball continued to go through Stewart and she rewarded the Tigers by scoring six of the team’s 11 points in the frame.

Waverly built its lead to 22-17, but Jackson’s Katelyn Webb drilled a shot from distance to close the gap at 22-20 going into halftime.

“We were 8-of-27 from the field shooting, 2-of-6 from the free throw line and turned the ball over 12 times, yet trailed by just one possession,” Walburn said. “Normally when that happens, you’re down double digits but we were in a good position against a very talented team.”

“We gave up too many second chance opportunities in the first half, but Jackson missed some of those chances to help keep us ahead,” Waverly coach John Bonifield said. “Jackson made us run a lot of half-court offense, which we’re capable and have adapted to doing, but that’s not our bread and butter. We like to get out in transition and create off turnovers.”

Jackson tied the game 24-24 in the third. But that’s when Carter began to take off.

It started with a 5-0 run and the floodgates were opened. She finished the quarter with 11 points while Little buried a huge 3-pointer to put the Tigers ahead 40-31 after three.

With a hot hand and a fearless mentality, Carter continued attacking and making baskets as the lead reached double digits. Leading 51-35, Carter pulled up from 18-feet and buried a shot, etching her name in Waverly history with career point No. 999 and 1,000, putting the finishing touches on the game.

“Carter is a really good player,” Walburn said. “What she accomplished by scoring 1,000 for her career is no small feat. She’s a tough and relentless competitor, and she killed us in the second half. We couldn’t contain her and her motor inside.”

For Jackson, T.J. Carpenter finished with 11 points and 11 rebounds, followed by Hughes with nine points.

The Ironladies say goodbye to two seniors in Taylor Evans and Maycee Burnside, whom Walburn gives praise to for sticking with everything through the good and bad.

“It’s tough to ask the kids to come in every day to practice knowing that the wins aren’t piling up like we’d hope, but those two showed up and battled hard every night,” Walburn said. “You couldn’t ask for two better kids, and they both have very bright futures. They’re special people with great character, and it sucks to lose them because they will be missed but I’m excited to see what they do in the future.”