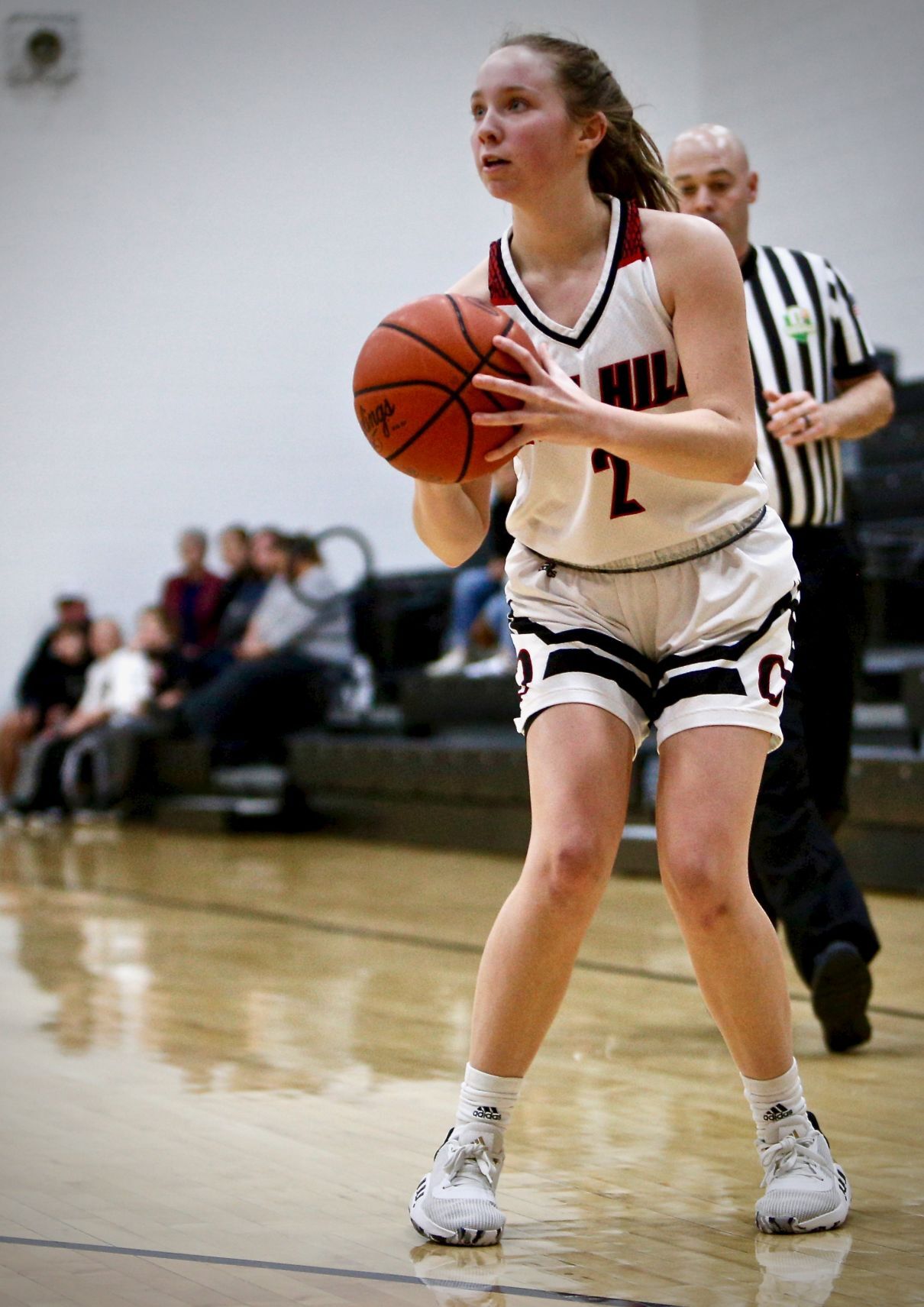 Oak Hill’s Baylee Howell shoots and buries a 3-pointer last season against Waverly. Howell steps into a starting role this season as the Oaks aim for a similar campaign this year as last year. 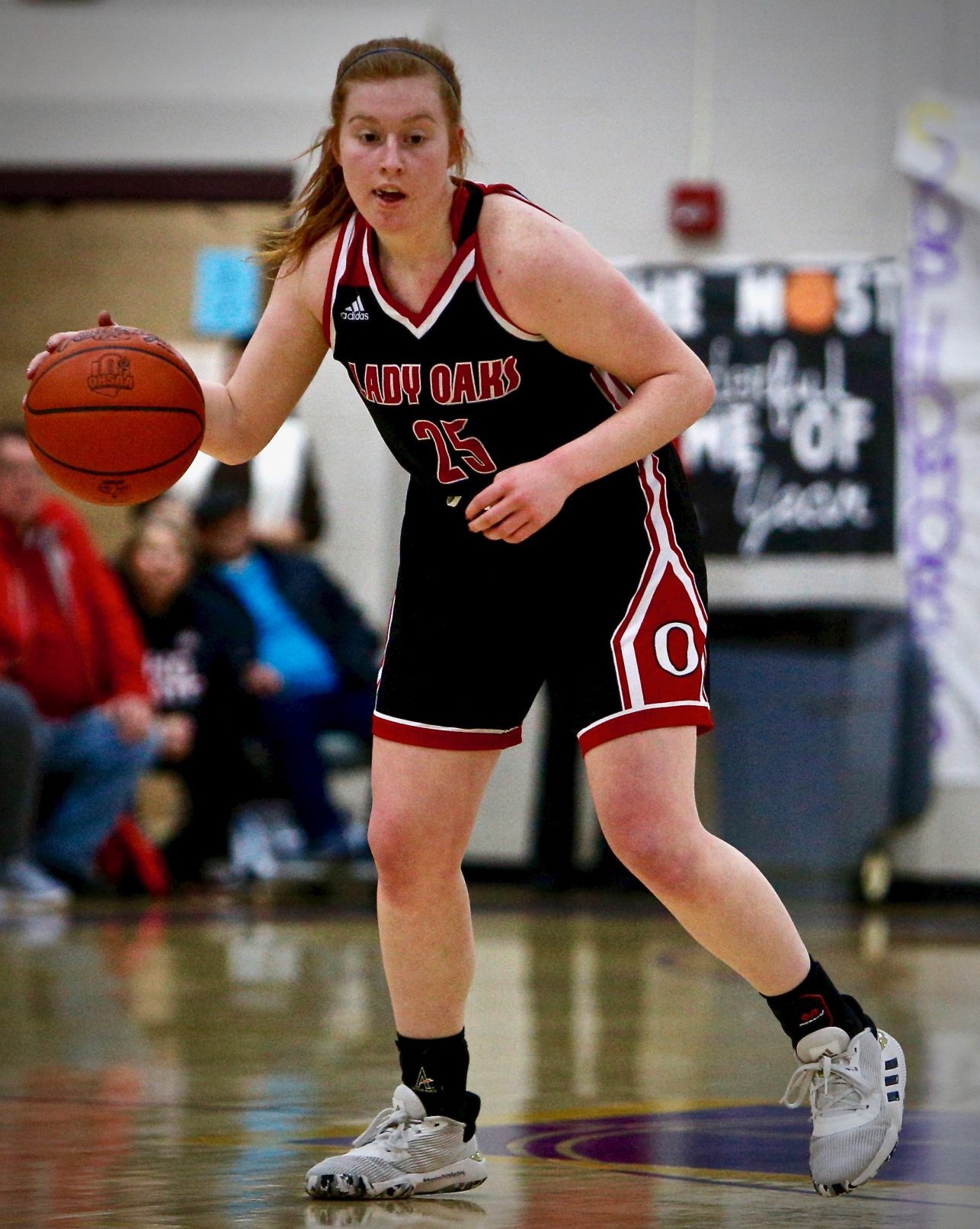 Oak Hill’s Olivia Clarkson, who was third-team All-District last season, is back for her fourth year as a starter as she hopes to lead the Oaks back to district play.

Oak Hill’s Baylee Howell shoots and buries a 3-pointer last season against Waverly. Howell steps into a starting role this season as the Oaks aim for a similar campaign this year as last year.

Oak Hill’s Olivia Clarkson, who was third-team All-District last season, is back for her fourth year as a starter as she hopes to lead the Oaks back to district play.

OAK HILL — Call last year a Cinderella run if you choose, but Oak Hill was really good and the results proved it.

The last time the Oaks were on the floor was in their first district final since 2012, a heartbreaking loss to Eastern Brown in the final seconds to cap an 18-9 season.

“We’ve talked about what we accomplished in our daily practices in a sense of how focused the team became on offensive schemes in the latter part of the year,” Oak Hill coach Doug Hale said. “That level of success leads to kids completely buying into the system. We don’t want to wait 10 games to get where we were. We want to start fast and maintain.”

It won’t be an easy add on though. And that’s not just because of COVID-19. It’s because three starters are gone in Baylee Howard, Peyton Miller and All-Ohioan Caitlyn Brisker.

However, Oak Hill does bring back two starters in senior Olivia Clarkson and junior Chloe Chambers, who will have much more responsibility this season.

“Olivia is a four-year starter so she’s been through and seen it all for us. She had a really good summer though it was limited, and you can see that she’s ready to fill some of those roles that Caitlyn, Baylee and Peyton had,” Hale said. “Chloe returns to the post having another year of experience under her belt. We’re hoping she gives us a lot of production and takes her game up a notch as well.”

Although the experience factor isn’t as high in the backcourt, juniors Baylee Howell, Brooke Howard and senior Tamron McCain played significant minutes last season and will have added duties this year.

Also look for players like Emily Doss, Tori Bodey, Haley Krannitz, and Kyla Simmonds to see the floor as well.

But they’ll also be adjusting on the fly, much like other teams will with the lack of scrimmages due to COVID-19.

“This has been an offseason unlike any other. We’ve only had one scrimmage so we’ve had to change some things,” Hale said. “Our biggest thing is getting our guards used to game-type situations, but there’s only so much you can do in practice to replicate it.”

Rest assured that while Oak Hill adjusts through the first month of the season, it’ll be playing its best basketball come late January.

Aside from a typical tough SOC II slate with Wheelersburg, Waverly, Minford and others, the Oaks’ non-conference schedule is just as tough with Notre Dame and North Adams, who both played in regional finals last season, alongside Coal Grove and Alexander.

The growing pains will happen, bumps are going to be taken, but Hale just wants to see his team be competitive night in and night out.

“That’s the main thing for us is we must compete every night. We know that our talent isn’t as high as some other teams, but that doesn’t mean we won’t give 110 percent effort every game,” Hale said. “We have to follow gameplans and our basketball IQ needs to be much higher this year. We make our schedule hard on purpose, but I believe this group can achieve something big this year if they effort is there.”

Oak Hill opens the season Monday on the road in SOC II action at Northwest.