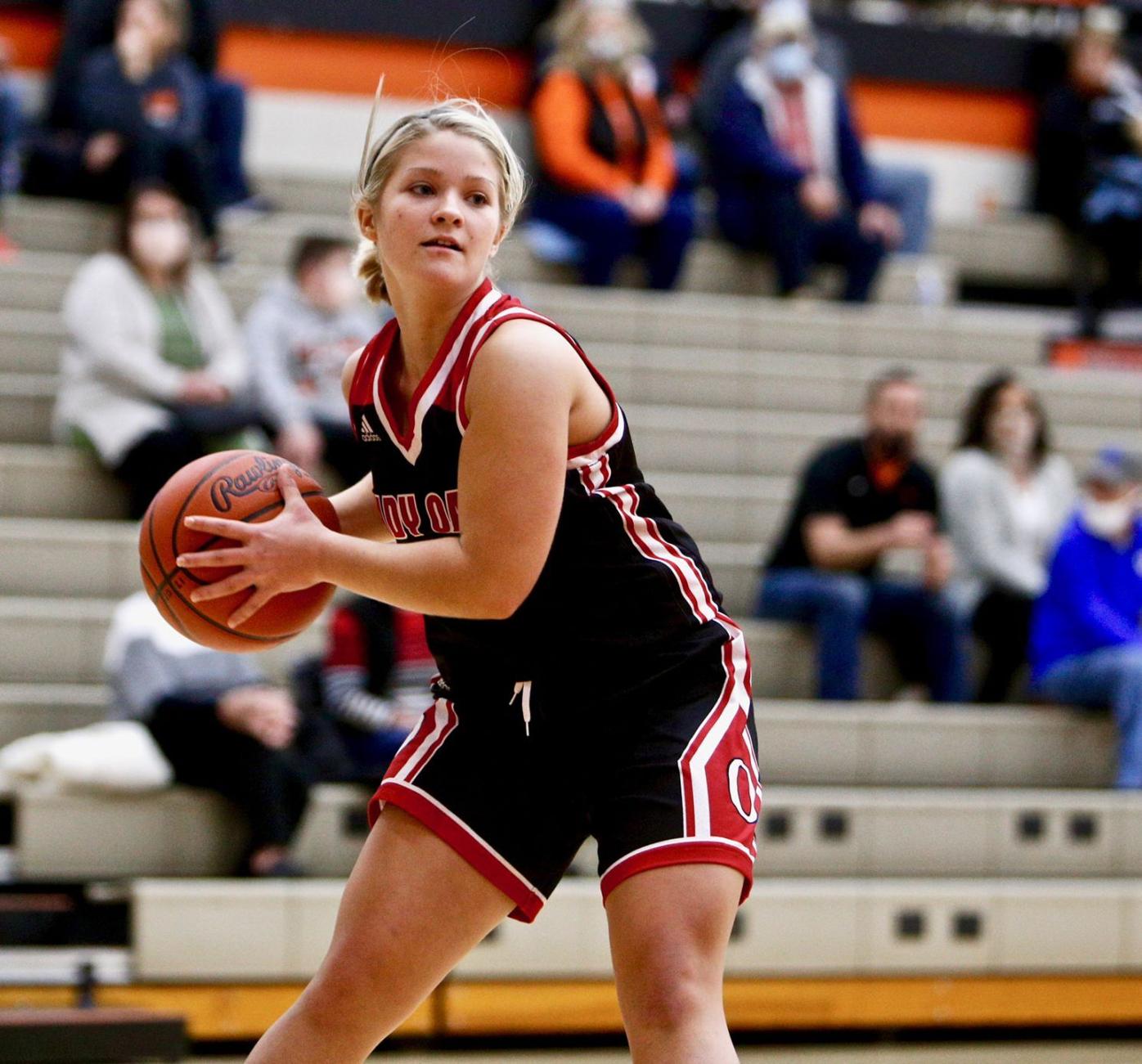 Oak Hill’s Brooke Howard finished with nine points and six assists in the Oaks’ 52-33 victory over Huntington in a Division III sectional semifinal on Saturday. 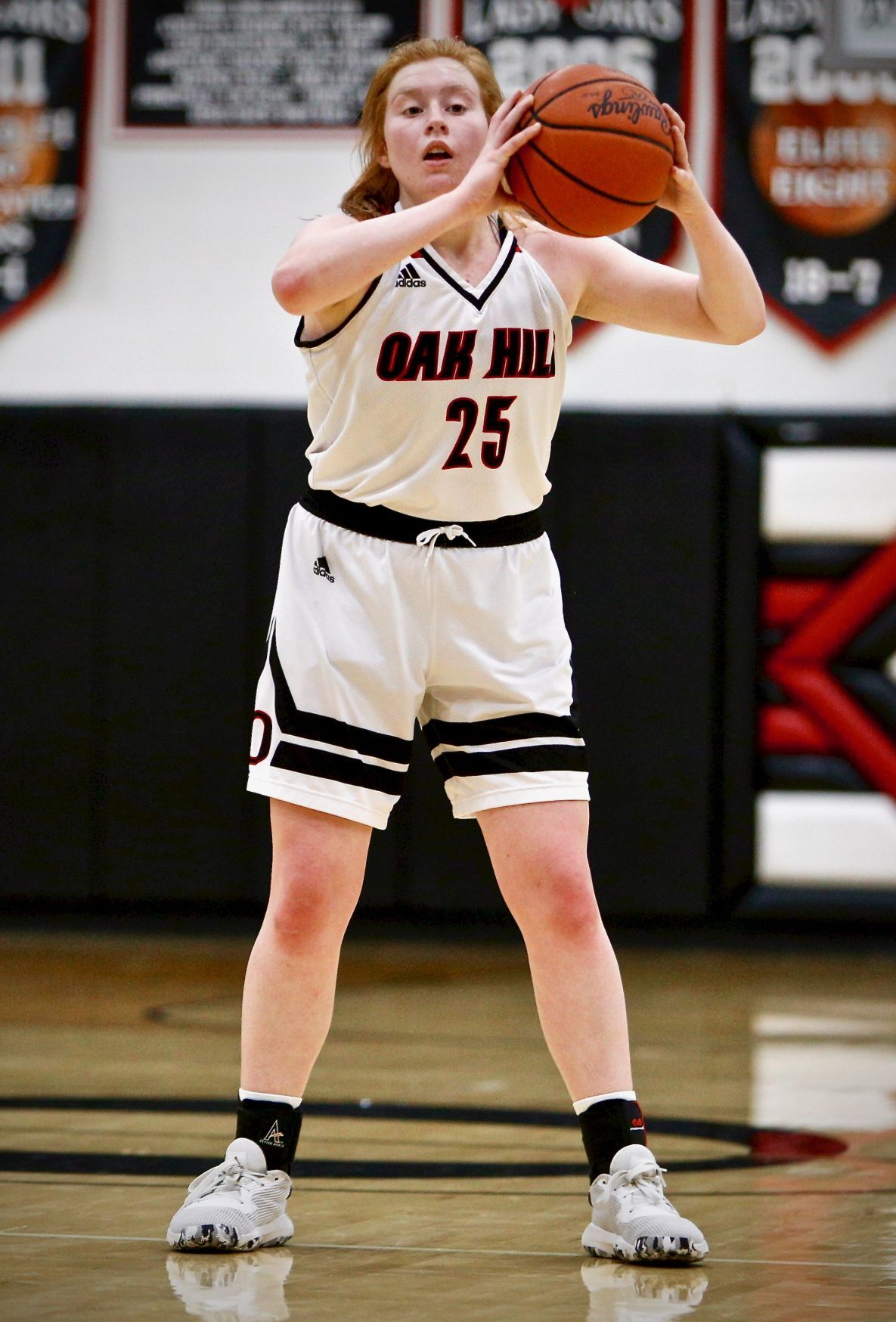 Oak Hill’s Olivia Clarkson finished with 18 points and eight rebounds in the Oaks’ 52-33 victory over Huntington in a Division III sectional semifinal on Saturday.

OAK HILL — Oak Hill knew it had to do two things to win: control the boards and limit Huntington’s Allison Basye.

Although the latter is much easier said than done, the Oaks (12-8, 9-6 SOC II) won the rebound battle 40-23 and limited the junior forward to 17 points alongside 10 rebounds.

They also had three players with double figures in scoring as they ended Huntington’s season with a 52-33 victory in a Division II sectional semifinal on Saturday.

“Despite giving up some size, I thought Brooke Howard did a great job guarding Allison and we had good help side defense,” Oak Hill coach Doug Hale said. “She helped hold her under her average and other players helped out on her as well. Overall, just a gutsy effort from everyone who saw the floor.”

Howard also ran the show offensively and set up her teammates in positions for open shots, or found them cutting to the basket.

She had six assists on the night, which additionally led to Baylee Howell, Olivia Clarkson and Chloe Chambers all finishing each with over 10 points.

“If it wasn’t for Brooke, we wouldn’t be able to do the things we do,” Clarkson said. “I wouldn’t score whatever I have on any given night, Chloe wouldn’t get the looks she does in the post either. Her and Baylee both really get our offense going and make it happen.”

Both offenses slowed down in the second, but Howell, Chambers and Emily Doss each connected on a basket for a 6-0 run. Huntington scored four of the last six points, but trailed 28-16 at halftime.

“Usually we struggle in the first quarter, but we came out big and hit four 3’s in the first quarter,” Hale said. “But we only scored eight points in the second, and that’s the type of team we’ve been all season. Luckily it didn’t affect us too much as we were able to shut down Huntington and contain Allison.”

The Oaks continued to maintain their distance despite Basye getting aggressive and beginning to get to the free throw line. The lead dipped to single digits at 36-27 midway in the third, however, that was all the juice Huntington had left in the tank.

Chambers and Howell converted buckets that helped push their lead back up to 42-28 heading into the fourth, and proceeded to slam the door shut on Huntington’s season.

“Everyone stepped up and did their jobs for us,” Hale said. “Chloe was great on the boards, Brooke ran our offense well, Baylee and Olivia hit shots while Emily and Tamron (McCain) gave us great energy. We played aggressive and that’s what you want to see out of your team in the tournament.”

Clarkson finished with a game-high 18 points and eight rebounds, followed by Chambers with 12 points, 19 rebounds and eight blocks.

Oak Hill advances to a Division III sectional final on Wednesday at Eastern Brown in a rematch of last year’s district final, won by the Warriors in the final seconds.

“I think we’ll come in with a fire lit underneath us knowing what happened last year,” Clarkson said. “We’re not ready for our season to be over, so we’ll be ready for whatever.”