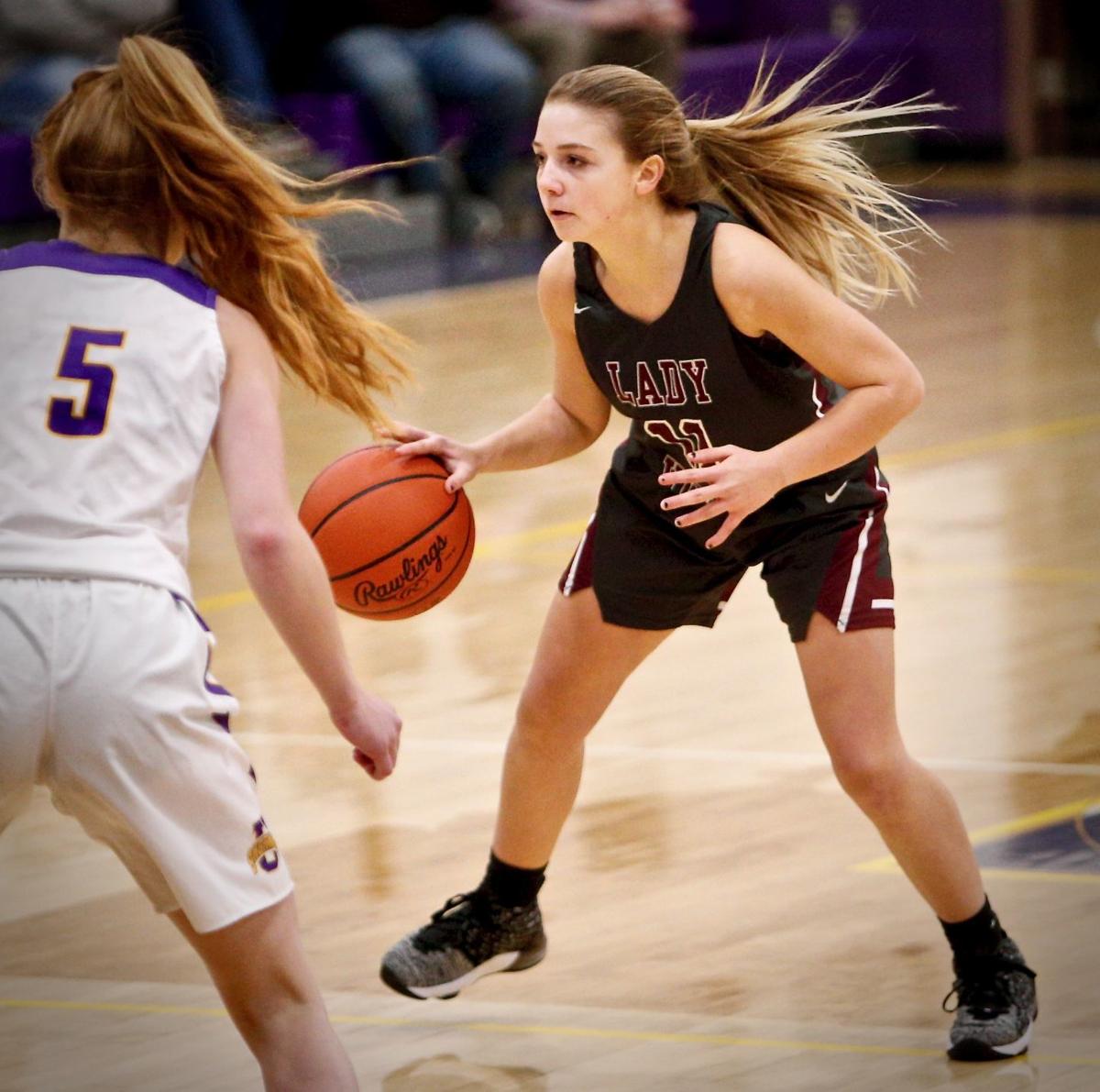 Vinton County’s Josie Ousley dribbles at the top of the key while being guarded by Unioto’s Hallie Pinkerton. Ousley’s 18-point outing against Alexander served as one of the top five game of this girl’s basketball season. 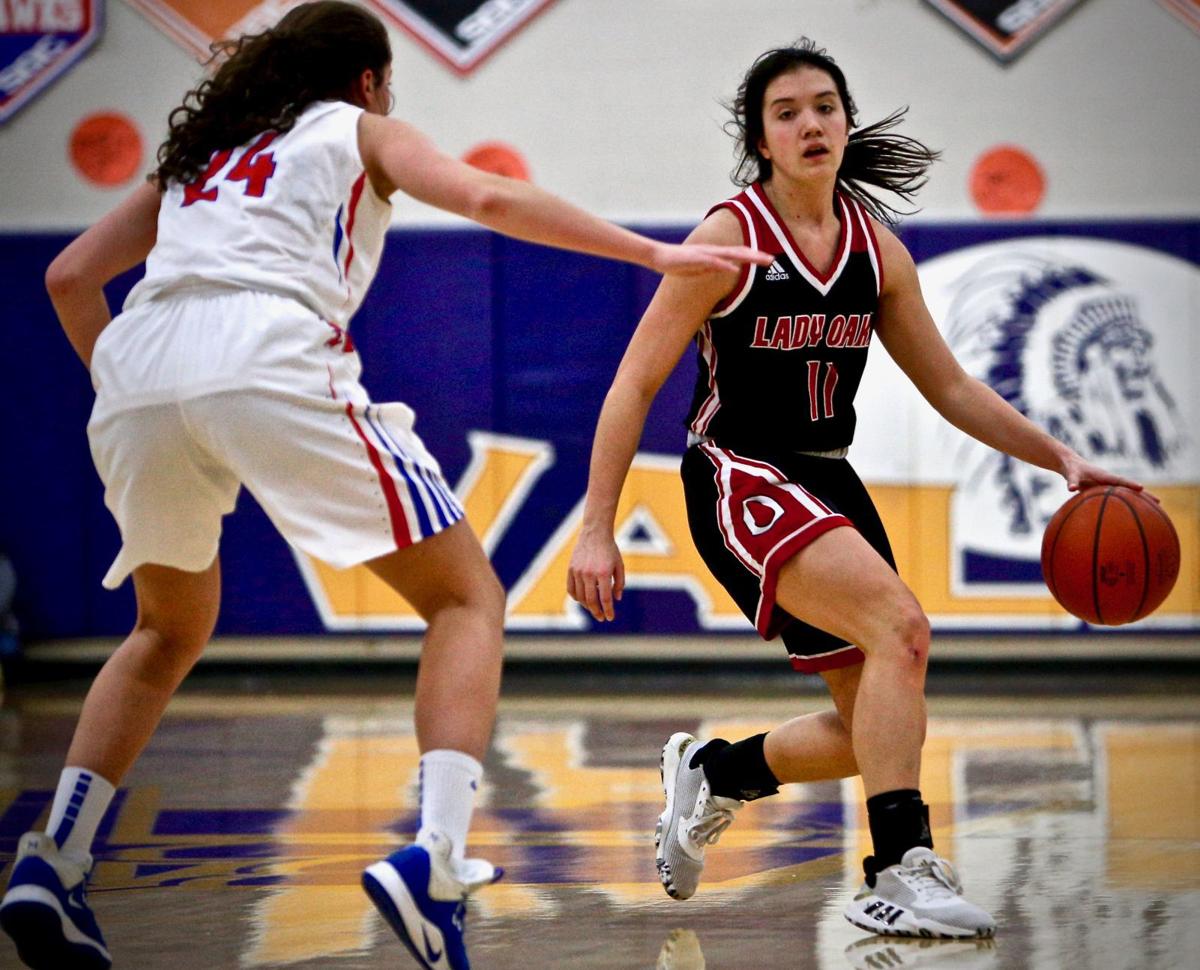 Oak Hill’s Caitlyn Brisker dribbles while being defeated by Northwest’s Reagan Lewis in a Division III sectional final. Brisker’s leadership and play helped aid the Oaks all the way to a Division III district final as the top moment of the girl’s basketball season.

Vinton County’s Josie Ousley dribbles at the top of the key while being guarded by Unioto’s Hallie Pinkerton. Ousley’s 18-point outing against Alexander served as one of the top five game of this girl’s basketball season.

Oak Hill’s Caitlyn Brisker dribbles while being defeated by Northwest’s Reagan Lewis in a Division III sectional final. Brisker’s leadership and play helped aid the Oaks all the way to a Division III district final as the top moment of the girl’s basketball season.

Note: This sports story appears in the Wednesday, March 18 newspaper on Page B1.

Another chapter to a fantastic basketball season was added to the books.

Looking back at it, the miles alongside the amount of wear and tear I put my car through was completely worth it to witness some instant classic this season.

And with spring sports currently on hold, why not take a look back at December-March basketball and relive some of those moments.

We’re counting down the top five games from the girls’ basketball season.

Over the past few years, it’s come down to the final minute between these two teams and this time was no different.

Athens controlled the game early before Olivia Kennedy and Bronwyn Nelson connected on shots for a 14-12 lead, one that remained in tact up to 21-17 at halftime.

The Bulldogs came out on a 9-0 run to start the third and reclaim the lead for the rest of the quarter. Then Raegan Hall began to find her shot and Jackson took off.

She scored night of her twelve points in the fourth, Taylor Evans buried a huge triple to put the Ironladies up 37-32. It came down to the final shot, which Athens missed at the buzzer to preserve the Jackson victory.

Simply put, this game was wild. But then again, it wouldn’t be an SOC II game if there weren’t fireworks.

Oak Hill suffocated Waverly throughout the first half, creating turnovers and cashing in on the other end to the tune of a 30-19 lead at the half.

Then the wheels fell completely off for the Oaks as they committed multiple turnovers and gave up 29 points in the third to give Waverly a 48-44 lead going into the fourth.

Yet somehow, Waverly gave momentum right back to Oak Hill down the stretch as Baylee Howell and Olivia Clarkson lead an 8-1 run to create some late separation and close out an Oaks’ victory.

Nothing quite like a showdown between two of the best inside Division II in the middle of the season.

Vinton County was dealt a big blow midway through the first quarter as Myriah Davis left the game with an injury and did not return. Fortunately for the Vikings, they put the ball in the hands of Morgan Bentley and good things continued to happen.

With her taking point forward responsibilities, she kept Unioto on its toes while setting her teammates up to continuously convert buckets. Never trailing in this game, the Vikings showcased their dominance and walked away with the road victory.

These two ultimately rematched in a Division II district semifinal with the Vikings coming out on top once again.

Everything was riding on this game. First place in the TVC, tournament seeding implications and bragging rights.

Early on, the Vikings had no answer for Alexander’s Kara Meeks on the inside as she scored six early points to put the Spartans ahead 11-9.

The scoring stalled for a while before Rylee Ousley buried a triple to give the Vikings their first lead before Josie Ousley drilled a 3-pointer for a halftime 21-15 advantage.

Josie Ousley had her fingerprints all over this game as the Vikings continued to maintain control down the stretch. She finished with a season-best 18 points and back-to-back 3’s from Tegan Bartoe and Lacie Williams iced the game to put the Vikings back in first place of the TVC.

The memories of this game will stay with me forever, for both good and bad reasons. As a 12-seed, Oak Hill was the hottest team in the tournament, pulling off two ‘upsets’ over Northwest and Southeastern to make it to a Division III district final against the Warriors, who were 23-1.

The two titans went at it back and forth, but Eastern Brown had a little more firepower in the first half and managed its biggest lead of the game at 24-17 going into the break.

After being challenged at halftime, Oak Hill found its footing behind first team All-Ohioan Caitlyn Brisker and clawed its way back into the game, eventually taking a 34-33 lead in the fourth.