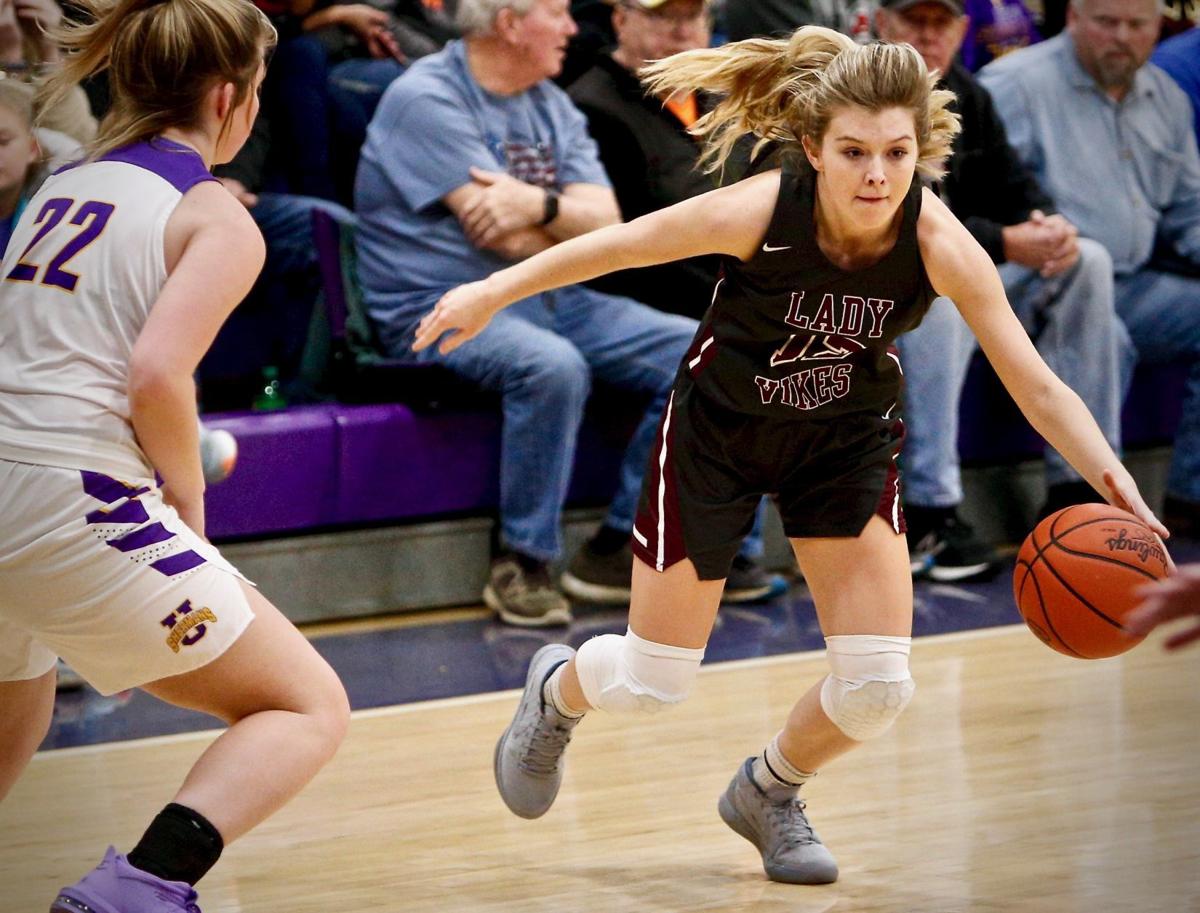 Vinton County’s Tegan Bartoe finished with a game-high 14 points and three rebounds in the Vikings’ 53-46 victory over Unioto in a Division II district semifinal on Thursday. 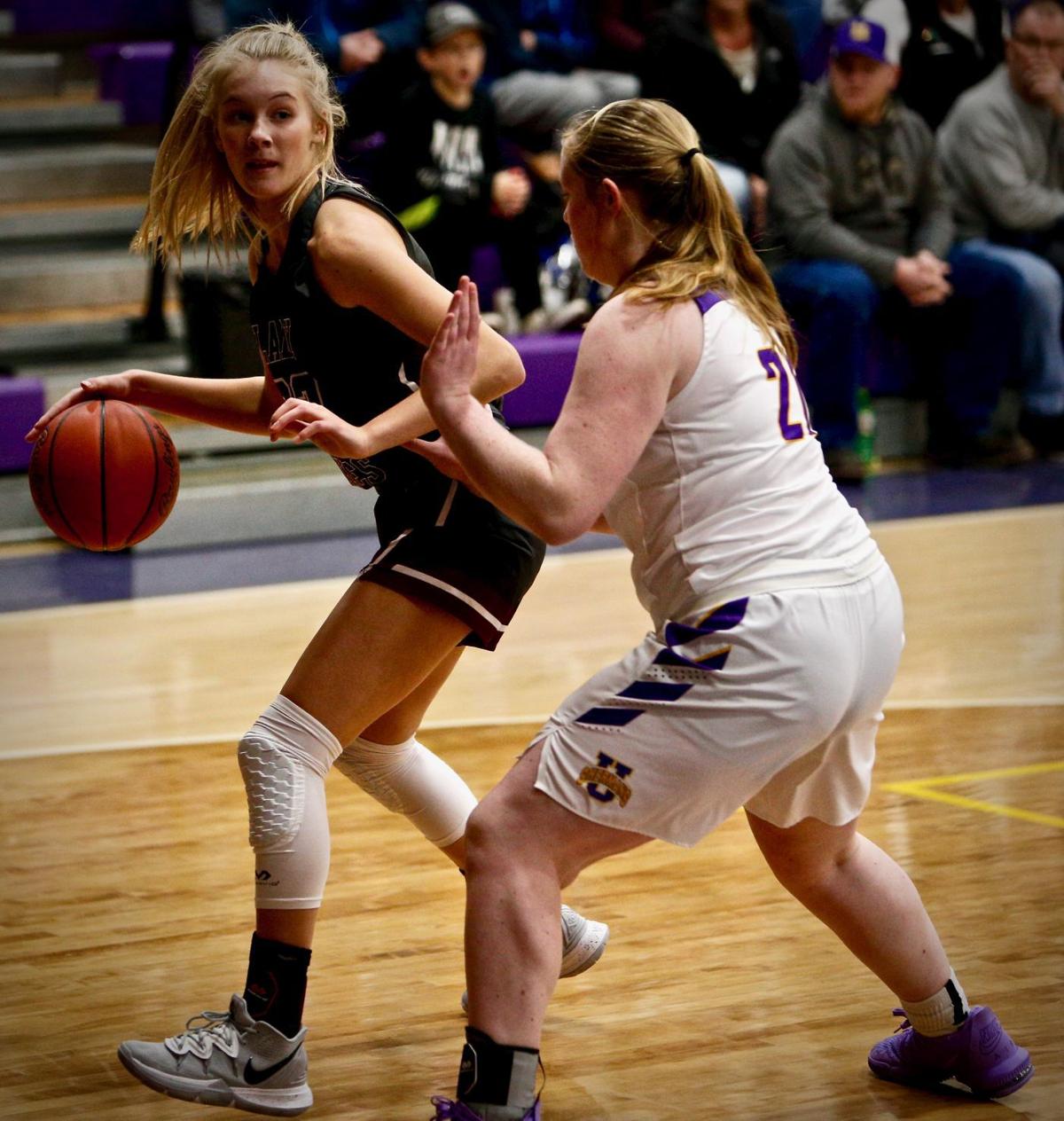 Vinton County’s Cameron Zinn looks to find an open teammate while being guarded by Unioto’s Avery Miller. Zinn finished with 11 points and six rebounds in the Vikings’ 53-46 victory over Unioto in a Division II district semifinal on Thursday.

Vinton County’s Tegan Bartoe finished with a game-high 14 points and three rebounds in the Vikings’ 53-46 victory over Unioto in a Division II district semifinal on Thursday.

Vinton County’s Cameron Zinn looks to find an open teammate while being guarded by Unioto’s Avery Miller. Zinn finished with 11 points and six rebounds in the Vikings’ 53-46 victory over Unioto in a Division II district semifinal on Thursday.

Note: This sports recap appears in the Wednesday, Feb. 25 newspaper on Page B1.

CHILLICOTHE — Anytime Vinton County and Unioto square off, expect fireworks. Add in a potential district final appearance, all bets are off.

The two titans competed in an extremely tight and physical game, but when the dust settled, it was Vinton County walking away with a 53-46 victory over the Shermans in a Division II district semifinal on Thursday.

The victory marked the second time the Vikings beat Unioto. But more importantly, it punched the Vikings’ ticket to a district championship for the second straight season.

“We knew coming in that Unioto was going to play a rough, physical style of basketball, and we were ready for it,” sophomore forward Cameron Zinn said. “We kept our focus despite us having a few breakdowns at times in the first half and third quarter, but we wanted this one because we wanted that shot at a district title again.”

The Vikings were in control from the start to the finish, and Tegan Bartoe was locked in.

She came out aggressive and firing as she scored seven of the Vikings’ opening nine points as they led 9-4 after the first quarter.

The Vikings turned up the defensive pressure and began pulling away from Unioto. Bartoe buried her second 3-pointer that capped a 10-2 run pushing the lead up to 19-6.

“I had a mismatch on me so I knew that I could take her to the rim,” Bartoe said. “Everything was going right in the first half. They were all up in our grill and being physical so we just matched their intensity.”

The tiny momentum began to snowball in the third as the Shermans continued cutting into the Vikings’ lead.

Unioto’s Amber Cottrill hit a pair of free throws that capped a 14-1 run, which trimmed the lead to 28-23, and had the Vikings reeling as Bartoe and Zinn each picked up their third and fourth fouls.

The Vikings’ bench helped keep them ahead with stout defensive play and solid rebounding as the tide began to turn a little bit. Then Lacie Williams swished her only bucket of the game, a 3-pointer that put the Vikings ahead 36-30 going into the fourth.

“That third quarter was rough with myself and Tegan on the bench in foul trouble,” Zinn said. “We were rushing shots left and right which wasn’t working for us. But our bench was ready and the effort they gave defensive was amazing. Chloe (Haybron) played great defensively and really stepped up with her face guarding.”

Unioto continued to battle back and cut leads down to three or four points, but it just couldn’t manage that extra stop.

Although it later cut the lead down to 45-41, it couldn’t stop the Vikings down the stretch as Rylee Ousley drilled the biggest triple of the game, pushing the lead up to seven points and closing out the victory.

“I told Rylee that she had ice in her veins. That was a huge shot she hit,” Zinn said of her teammate. “She’s a really strong girl and a great 3-point shooter. She played aggressive and really helped us when we needed it.”

Bartoe finished with a game-high 14 points to lead the Vikings, followed by 11 points and six rebounds from Zinn.

Vinton County advances to a Division II district final against No. 1 ranked Circleville at 7:00 on Thursday at Southeastern High School.

For the last two seasons, the Vikings have played in a district final only to be on the losing side of things.

Maybe the third time will be the charm, but the Vikings know it’ll take their ‘A+’ game to pull it off.

“Circleville is the No. 1 team in the state, but we’re ready for them,” Zinn said. “We played them over the summer so we have a small idea of what they’re like. They have two really good post players so Morgan (Bentley) and I have our work cut out for us. We knew this game was going to happen for a district championship and I think we’re ready for it.”