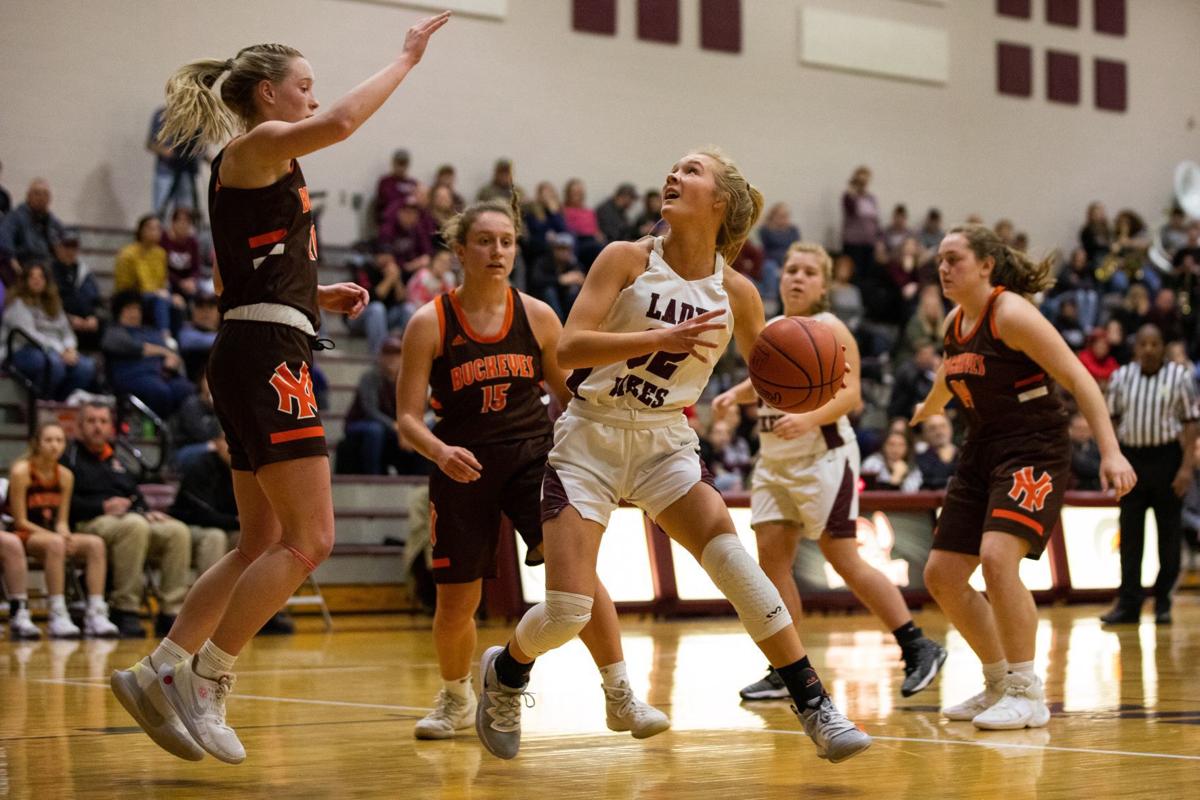 Vinton County’s Cameron Zinn (center) turns around and looks at the basket after grabbing an offensive rebound. She finished with 14 points and eight rebounds in the Vikings’ 53-52 loss to Nelsonville-York on Monday. 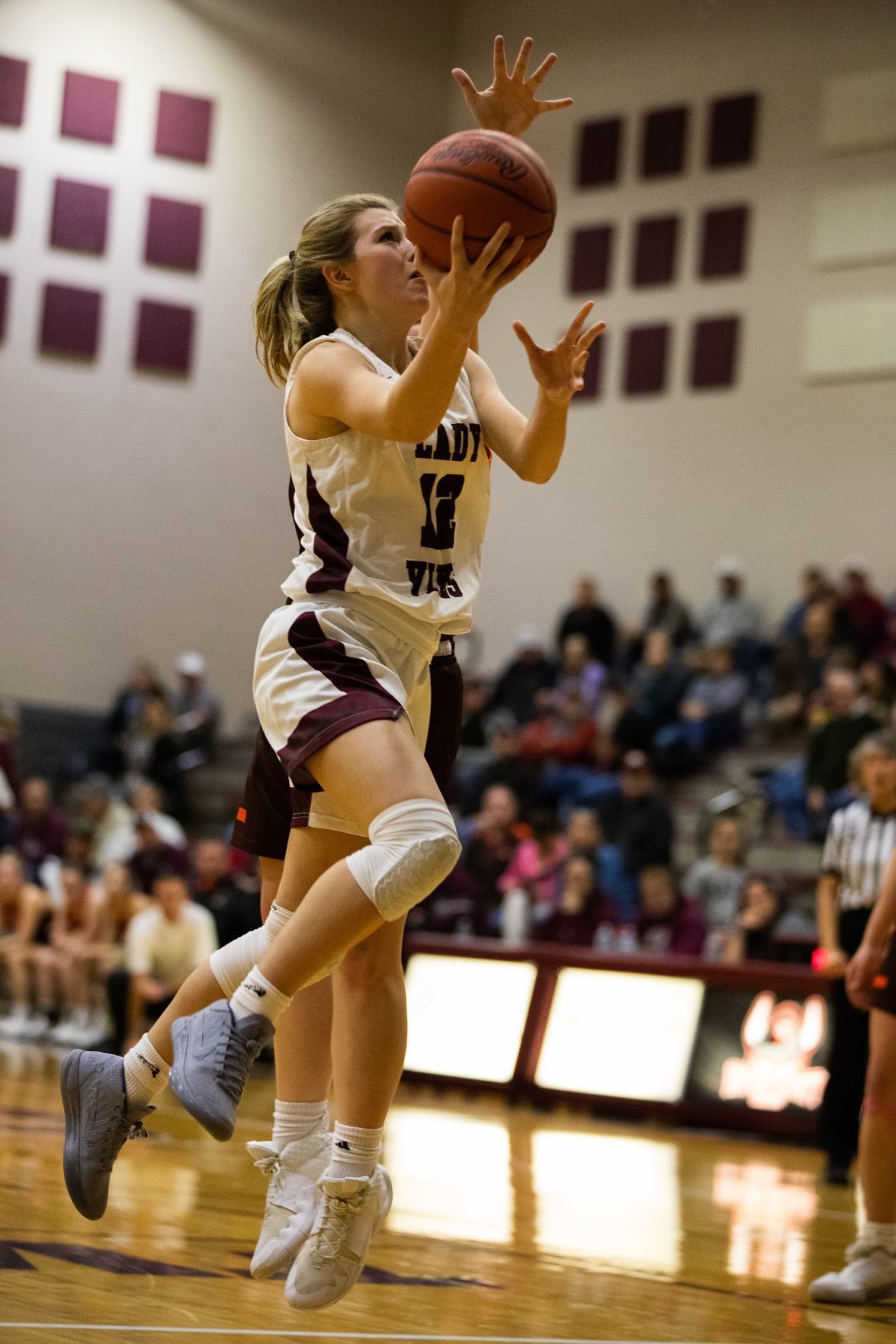 Vinton County’s Tegan Bartoe spins and converts the layup in the Vikings’ 53-52 loss to Nelsonville-York on Monday.

Vinton County’s Cameron Zinn (center) turns around and looks at the basket after grabbing an offensive rebound. She finished with 14 points and eight rebounds in the Vikings’ 53-52 loss to Nelsonville-York on Monday.

Vinton County’s Tegan Bartoe spins and converts the layup in the Vikings’ 53-52 loss to Nelsonville-York on Monday.

Note: This story appears in the Wednesday, Jan. 8 newspaper on Page B1.

McARTHUR — Ever since Nov. 25, 2017, every team that has played at Vinton County has gone home with the same result: a loss.

The Vikings had won more than 40 straight home games and 30 straight inside of TVC up to Monday.

But after the final buzzer sounded on Monday, both streaks came to an end as Alvia Speelman sank a 12-footer from the left baseline to propel Nelsonville-York (10-2) over the Vikings 53-52 in stunning fashion.

It also meant back-to-back losses for the Vikings (10-3), which additionally hadn’t been seen since 2017.

“We’re in a slump right now and we’re not playing very well,” Vinton County coach Rod Bentley said. “It sort of just feels like something hasn’t gone right of the past few games and we’re not getting the job done. That’s basketball. Right now, we’re in a league battle which is unfamiliar for us but we’ll get back to basics and hopefully turn things around.”

The Vikings caught a few breaks, but for the most part, they spent the night rushing some shots and trying to speed up offensive pace of the Buckeyes.

“Nelsonville ran a 1-2-2 zone on us a lot and we didn’t get a lot of clean looks at the basket,” Bentley said. “We didn’t knock down our 3’s as we typically do which is something we haven’t done in a few games. That was our struggle and we couldn’t overcome it.”

Vinton County opened up the game 0-of-10 from the floor, but forced some early turnovers to keep Nelsonville-York at bay with a 6-2 lead.

Then Morgan Bentley connected on a triple, the Vikings’ first made shot of the night with 3:45 followed by five straight points from Cameron Zinn to put the Vikings ahead 10-8. But NY came back to claim a 13-12 lead after the first.

The Buckeyes pushed that lead to 20-14 before Lacie Williams buried back-to-back 3’s to tie the game. However, NY went to into halftime with a 28-25 advantage.

“Lacie hit some big shots for us and she played pretty well,” Bentley said. “We felt at that point of the game that we were played OK and that we just needed to get a couple stops, convert on the other end and keep it going.

“We told the girls to just relax at halftime. Despite us not getting back-to-back stops the way we wanted to, we were still in a good position. We focused on taking away Nelsonville’s transition as well as boxing out and securing those rebounds when we had the chance.”

After being held scoreless in the second, Zinn came out firing and aiming to put a fire underneath her team.

She scored the first seven points of the quarter, which was followed by a Morgan Bentley bucket to cap a 9-0 run that put the Vikings ahead 34-28.

With the Vikings seizing momentum and ahead by six, that was supposed to be the point everything comes together as they run their opponents out of the building.

But Nelsonville-York weathered the storm, remained calm and showed its mental toughness.

“Cameron did a great job during that stretch and gave us a spark we needed,” Bentley said. “I thought that was going to be the point that we begin to slowly pull away, but that’s not what happened.”

Despite the Buckeyes hanging around, Vinton County held a 44-41 lead going into the fourth following a rebound and putback from Josie Ousley.

In a race to the finish, both stayed within one-possession of the other, understating that a possible two-possession game could be too much to come back from.

The Vikings led 52-51 with less than a minute left and we’re attempting to get the Buckeyes to foul them, but committed a travel to turnover the ball over with 28 seconds left.

The Buckeyes inbounded the ball and found Speelman, who sank the baseline jumper for her third and fourth points of the evening for the 53-52 lead.

All was not lost though as the Buckeyes were whistled for a foul with 1.2 seconds left, sending the Vikings to the line for a 1-and-1. But the shot hit the back iron and bounced out, sealing the end of the Vikings’ home winning streak.

“This one hurts, a lot. Not just for me, but for those girls who worked so hard,” Bentley said. “This loss doesn’t diminish what has been accomplished but we have to get back to the fundamentals of what made us who we are. We have to get our confidence back, get back in the game and continue grinding.”

Morgan Bentley finished with 16 points and six rebounds, followed by 14 points and eight rebounds from Zinn.

Vinton County is back in action on Thursday at home against Meigs before hitting the road on Monday for non-conference action at Fort Frye.