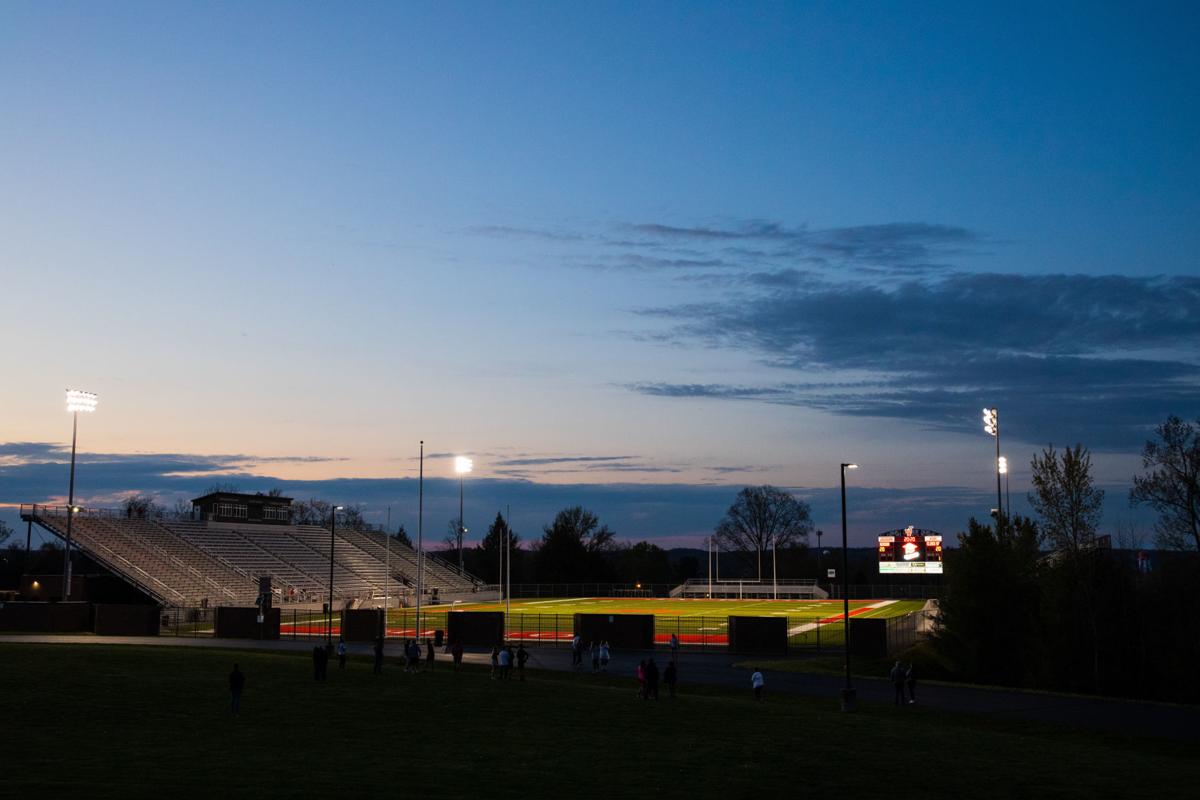 Jackson’s Alumni Stadium is lit up for 20 minutes and 20 seconds in support of the graduating class of 2020 as news came down from Governor Mike DeWine that school would be closed for the remainder of the school year, which in turn meant the official cancelation of the spring sports season. The OHSAA announced last Friday that full contact sports are allowed to conduct full workouts and open gyms with no restrictions a step in the right direction for fall sports. 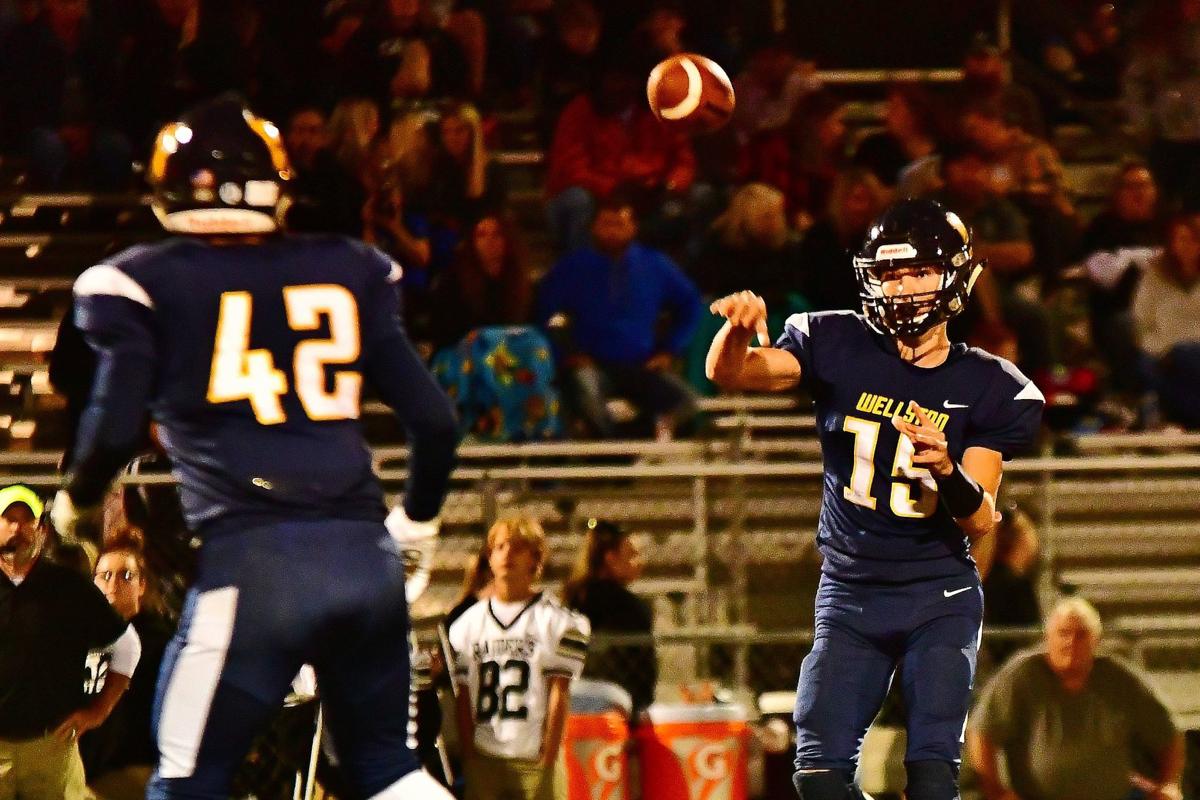 Wellston’s R.J. Kemp drops back and throws the ball to Jon Garvin in the Golden Rockets’ victory over River Valley last season.

Jackson’s Alumni Stadium is lit up for 20 minutes and 20 seconds in support of the graduating class of 2020 as news came down from Governor Mike DeWine that school would be closed for the remainder of the school year, which in turn meant the official cancelation of the spring sports season. The OHSAA announced last Friday that full contact sports are allowed to conduct full workouts and open gyms with no restrictions a step in the right direction for fall sports.

Wellston’s R.J. Kemp drops back and throws the ball to Jon Garvin in the Golden Rockets’ victory over River Valley last season.

It’s no secret that I, much like most of the world, miss sports.

These last three months sportsless have been the longest, most brutal evenings I can remember enduring. And I went through three-a-days during my high school football days.

But there’s slowly beginning to be some light at the end of the tunnel. The sports world can turn back onto its normal axis once again. We just need the end of July to get here as soon as it can.

Yes, I’m completely aware that today is July 1, but it feels like it’s been a decade since it was March 11 and the sports world turned completely upside down.

However, the UFC began to crack open the door back in sports by continuing on with UFC events, just with no audience. As unorthodox as it is, it’s completely better than nothing at all. Also, did you watch the Poirier vs Hooker fight of Friday night? That was epic.

Over the past few weeks, other major leagues have begun the process of going thorugh different channels in order to resume or start official games.

Although not all events or sports are coming back this year, some are and that in of itself is major progress.

NBA: The NBA’s board of governors overwhelmingly approved a proposal for 22 teams to return to play, starting July 31 at the ESPN Wide World of Sports Complex at Walt Disney World Resort in Orlando, Florida.

MLB: Major League Baseball will hold Opening Day either July 23 or 24, and players will head to training camps in a week after the league and the union on Tuesday agreed on health and safety protocols.

Soccer: Lisbon will host this season’s Champions League final on Aug. 23 after UEFA confirmed that the final stages of the 2019-20 competition will be held in the Portuguese capital rather than Istanbul.

Major League Soccer is nearly back, with the aptly named MLS is Back Tournament kicking off July 8 and running until the final on Aug. 11.

The Bundesliga became the first of Europe’s major soccer leagues to resume playing on May 16. La Liga returned on June 11, the Premier League on June 17 and Serie A on June 20.

Paris Saint-Germain were declared Ligue 1 champions after the Professional Football League (LFP) in France confirmed that the 2019-20 Ligue 1 and Ligue 2 seasons had been ended.

NCAA: In order to kick off the college football season on time, coaches throughout the country could begin working with their players again as soon as July 6, and required meetings and walk-throughs could start in mid-July if a proposed six-week practice plan is approved by the NCAA.

NHL: Training camps open July 10 ahead of the eventual 24-team tournament to be played in two hub cities.

PGA: Golf made its return in mid-June at the Charles Schwab Challenge, won by Daniel Berger.

Auto Racing: Kevin Harvick won his 50th career race as NASCAR returned at Darlington on May 17.

Scott Dixon won the IndyCar opener with a dominant run at Texas on June 6.

Formula One has announced the first eight dates of its rescheduled calendar as the sport aims to return to racing on July 5 in Austria.

MMA: UFC 249, which took place without a crowd present on May 9, was one of the first major sporting events in the United States since the beginning of the pandemic.

Olympics: The Summer Games in Tokyo have been postponed — organizers said the opening ceremony will now take place on July 23, 2021.

Track and Field: The Boston Marathon has been canceled for the first time in its 124-year history.

The European track and field championships in Paris this summer have been canceled as well.

Tennis: The United States Tennis Association is moving ahead with its plans to play the US Open in its projected time frame, starting on Aug. 31.

Wimbledon was canceled for the first time since World War II. The French Open has been postponed and is now scheduled to run from Sept. 20 to Oct. 4.

Horse Racing: The 146th Kentucky Derby has been moved from May 2 to Sept. 5. The 145th Preakness Stakes has been rescheduled for Oct. 3.

But of course, the main one that I am concerned about is with the fall season of high school sports.

OHSAA Executive Director Jerry Snodgrass tweeted a few days ago in response to a question if fall sports are still on that as of June 28th, they are scheduled to continue moving forward.

Ohio has moved into phases of allowing full contact workouts and open gyms as such, but it’s up to Governor Mike DeWine if anything is truly going to transpire come September.

Fingers crossed fall sports to go on as continued because this could be a really special year in the area. I’ll dive more into that in the coming weeks, but until then, stay safe.

And wash your hands.