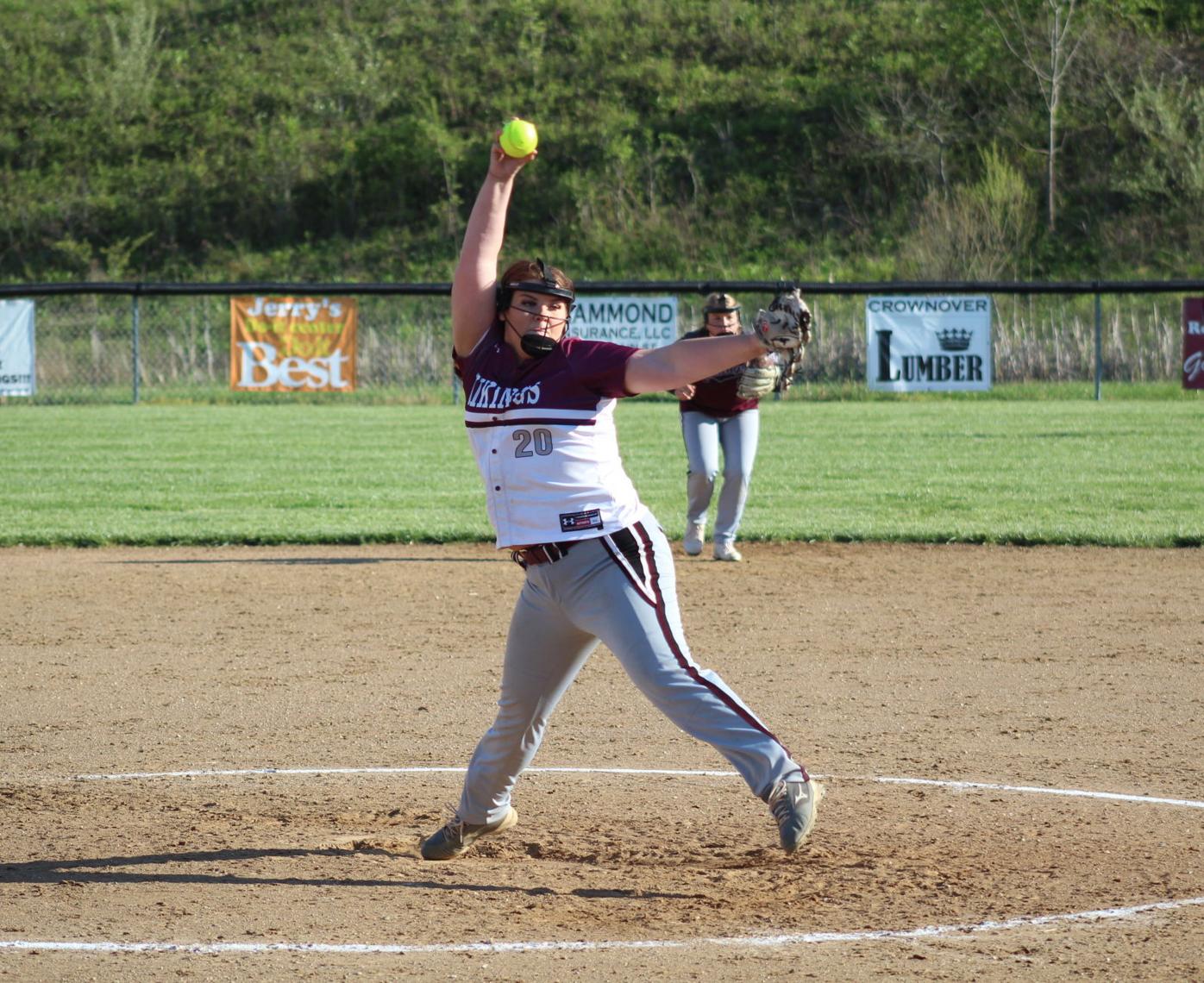 Vinton County senior Abby Faught pitches against Athens. Faught pitched a no-hitter and had a three-run single to lead the Vikings to a 6-1 win over the Bulldogs. 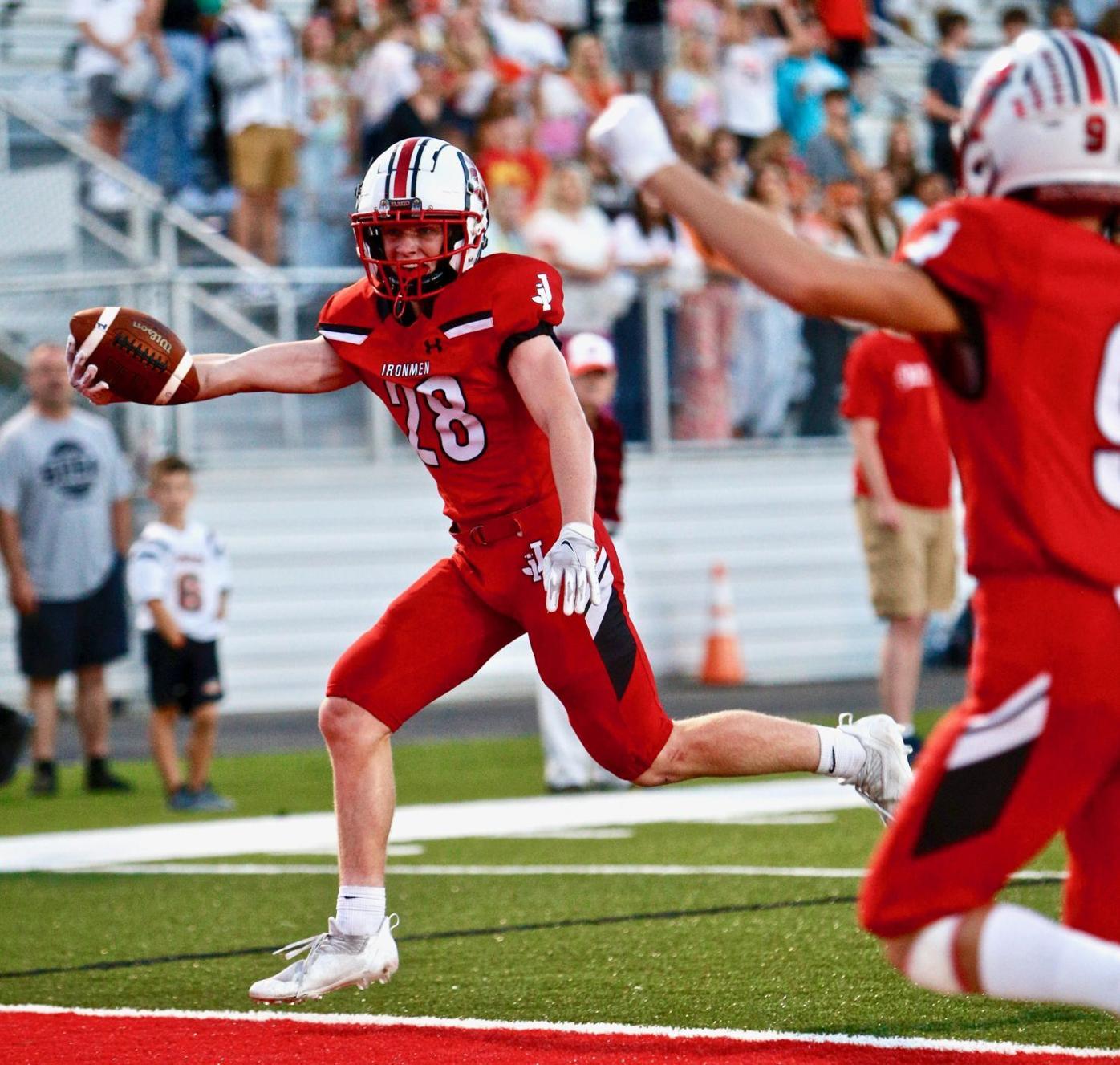 Jackson’s Eli Broermann crosses the goal line for a touchdown after hauling in his only catch of the night in the Ironmen’s 21-20 overtime win over Wheelersburg. 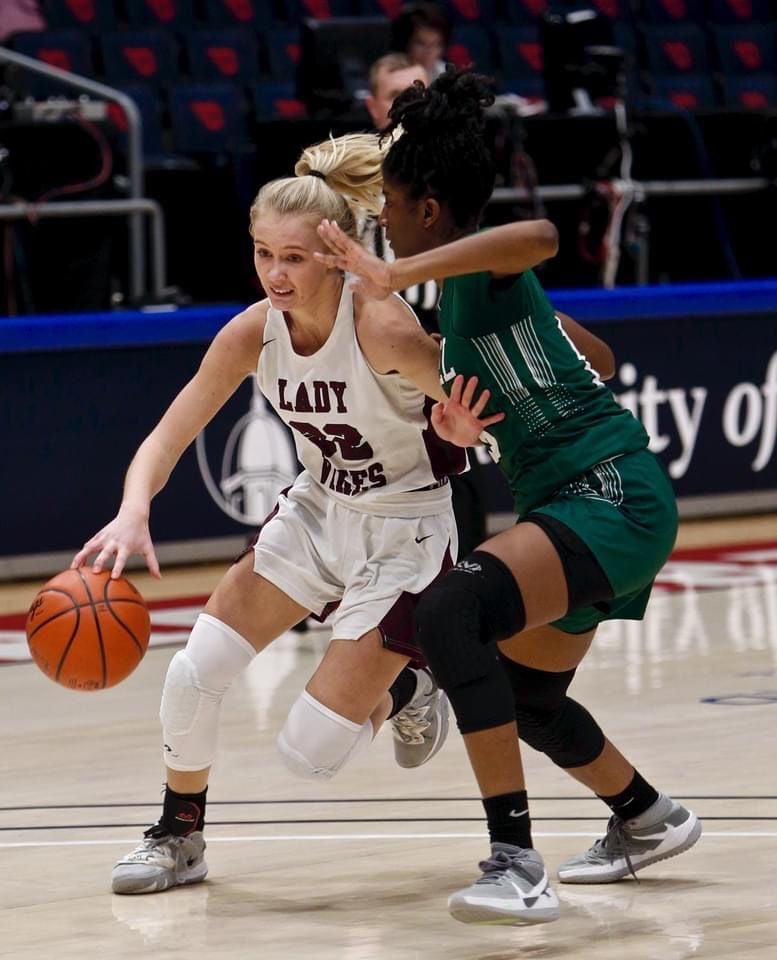 Vinton County’s Cameron Zinn converted the game-winning layup in the Vikings’ 53-51 victory over Laurel in a Division II state semifinal last season, marking the top moment of the 2021 sports year.

Vinton County senior Abby Faught pitches against Athens. Faught pitched a no-hitter and had a three-run single to lead the Vikings to a 6-1 win over the Bulldogs.

Jackson’s Eli Broermann crosses the goal line for a touchdown after hauling in his only catch of the night in the Ironmen’s 21-20 overtime win over Wheelersburg.

Vinton County’s Cameron Zinn converted the game-winning layup in the Vikings’ 53-51 victory over Laurel in a Division II state semifinal last season, marking the top moment of the 2021 sports year.

Throughout the season on the golf course, Kameron Maple consistently found his name atop the leaderboard when meets were all said and done.

Though the competition heated up at a district golf meet with a trip to state on the line, Maple remained calm and elevated his game to another level.

Staying patient and working the course, he navigated his way through 18 holes and fired a 74, edging out Fairland’s Landon Roberts by one stroke to win a district championship and earn a trip to state.

For Athens, it was just simple. A win guarantees a share of the TVC title. Point blank period.

All it had to do was beat Vinton County, which it had already done earlier in the season.

That proved to be a much taller task as the Bulldogs were tagged for six runs thanks in part to two RBIs from Kerrigan Ward and another one from Taylor Houdasheldt.

But the day belonged with Abby Faught, who was pure money in the circle as she tossed a no-hitter and added three RBIs of her own to smash the Bulldogs’ hopes of claiming the TVC.

Every great team needs to have a little bit of luck on their side throughout the season. Week two of football season was Ironton’s turn for some magic.

Tied 7-7 with just 5.2 seconds left, Jackson’s Ethan Crabtree buried a 28-yard field goal to put the Ironmen ahead 10-7 in what was thought to be the game-winner.

However, 1.9 seconds remained and that’s all the Tigers needed. The ensuing squib kick was taken by Landon Wilson, who ran left before nearly being tackled. But he managed to pitch the ball to Ty Perkins, who reversed field and found an opening before dashing 82 yards for the game-winning touchdown. 13-10 final.

This game happened just last month, but it felt like a complete turning of the page for Jackson’s program.

It was a defensive slugfest or an offensive struggle, whichever way you want to call it, but it was FAC basketball down to the wire.

Neither team held a lead bigger than two five points, and Chillicothe led 29-27 with less than 30 seconds left.

With the ball in Jackson’s hands, Mattie Walburn drove to the basket and found Katelyn Webb in the left corner, who buried the biggest shot of Jackson’s season; a triple with 18.4 seconds left for the win.

Anytime these two teams lock up on the gridiron, expect an instant classic to unfold in front of your eyes.

And this one was no different.

Tied 14-14 with less than three seconds left in the game, Wheelersburg’s Braxton Sammons attempted a 51-yard field goal that hit the crossbar and bounced out to force overtime.

Jackson rolled the dice on fourth down and Jacob Winters connected with Cade Wolford on a 12-yard touchdown to go up 21-14.

Wheelersburg scored on a four-yard touchdown from Ethan Glover and opted to go for two and the win.

However, Winters and company timed the snap and filled the gaps, allowing Winters and Xander Karagosian to break through for the tackle in the backfield to seal the deal. 21-20 final.

The Vikings controlled every single aspect of this game for 31 of the 32 minutes. But that final minutes came back to get them.

Braylon Damron connected on three 3’s in the first quarter to help the Vikings control a 14-12 lead.

Although Jackson took a momentary 21-20 lead after a triple from Drew Bragg, VC’s Eli Radabaugh answered back from deep at the buzzer for a 23-21.

The Vikings pushed the lead up to 36-28 behind Damron and Lance Montgomery, but Bragg countered back with a personal 7-0 run to cut the lead down to 36-35.

Later tied 42-42, Randall Matteson swished home a triple to put the Vikings ahead with a minute left.

However, Bragg got to the free throw line and connected on 1-of-2. On the second one, he managed to get the offensive rebound and connect on a jumper to tie the game to send it to overtime.

Jackson melted the final 2:15 of the game before Evan Spires found Braxton Hammond for the bucket underneath to secure the win and a sectional title.

Maybe it’s a mental or psychological thing, but most teams that play Sheridan tend to lose on arrival because it’s ‘Sheridan.’

However, the Vikings had a special plan for the Generals and executed it to perfection.

Despite trailing throughout the first quarter, it was a feel out process to understand how the Generals were going to attack.

The Vikings in turn got physical, limited the touches to Sheridan’s Faith Stinson inside and turned up the heat.

Myriah Davis and Tegan Bartoe each connected from distance to put the Vikings ahead 20-17, a lead they kept for the rest of the evening. Morgan Bentley later buried a huge triple with a few seconds remaining in the first half for a 29-24 lead.

Davis came out and scored the opening five points as they held the Generals to just six points in the third to control a 39-30 lead. Then in the fourth, with a 41-32 lead, Cameron Zinn corralled a loose ball and Lacie Williams swished a pure dagger to bring the Vikings a regional title.

What else could possibly be the top moment from this year? If I’m being honest, it’ll probably be the moment of the decade unless a team wins the state title.

I still get goosebumps and a slight adrenaline rush just thinking about this moment, so I can only imagine how the players felt on the court in the moment at the University of Dayton Arena.

Vinton County was never really in any danger throughout the contest as it led most of the way, and its biggest deficit was four points.

Lacie Williams cashed three early 3’s to help the Vikings get out to a 24-19 first quarter lead.

Laurel cut the deficit down to 27-25, but that was as close as it got for the time being and the Vikings took a 37-32 lead into the break.

The Gators tightened up defensively and outscored the Vikings 12-6 to own a 44-43 lead heading into the final frame.

Tied 48-48, Laurel’s Haley Thierry banked home a triple with 3:12 left, though it felt much like a dagger.

However, the Vikings held them scoreless for the rest of the game and Cameron Zinn came up with the two most clutch buckets of season in the final 1:45 of the game to put the Vikings ahead for good and send them to the state championship with a 53-51 win.