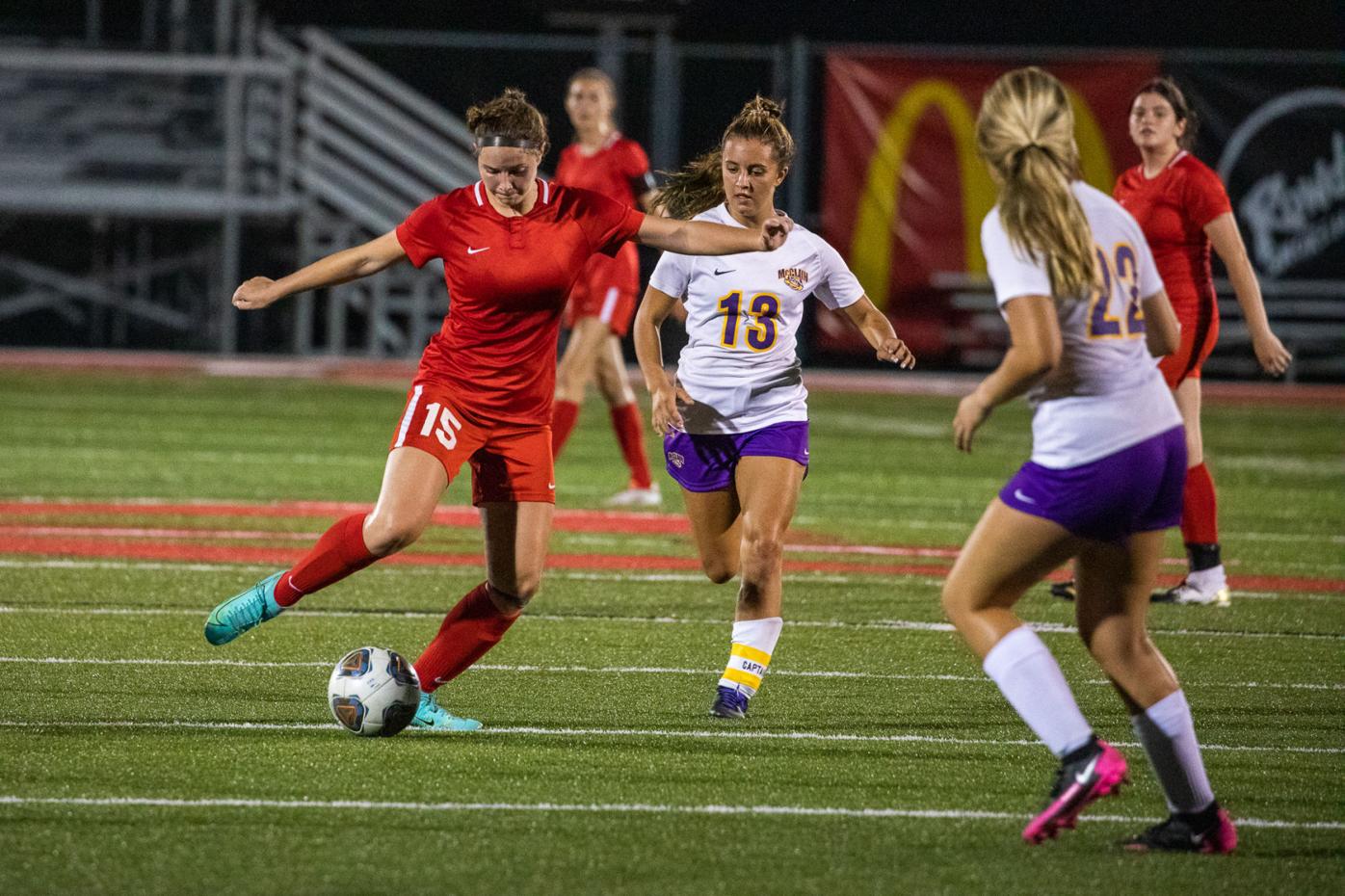 Jackson’s Makayla Wyant dribbles the ball between a pair of McClain defenders. She scored a goal in the Ironladies’ 3-1 victory on Tuesday. 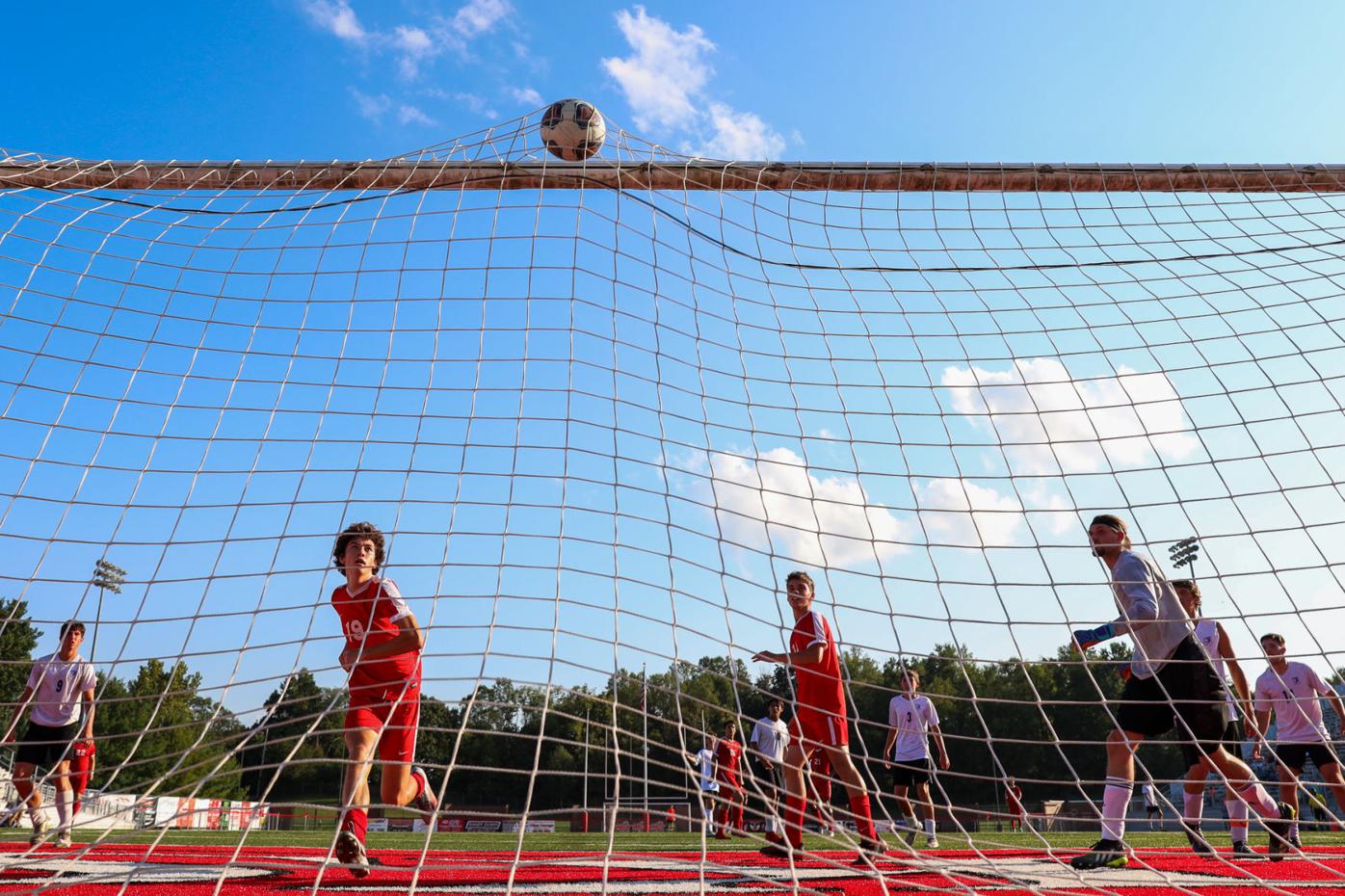 Jackson’s Coen Davis (left) scored a goal in the Ironmen’s 4-2 victory over McClain in FAC action on Tuesday.

Jackson’s Makayla Wyant dribbles the ball between a pair of McClain defenders. She scored a goal in the Ironladies’ 3-1 victory on Tuesday.

Jackson’s Coen Davis (left) scored a goal in the Ironmen’s 4-2 victory over McClain in FAC action on Tuesday.

JACKSON — It’s been less than an ideal start to the season for Jackson boys, but its starting to turn things around.

After a 1-4-1 start, the Ironmen made it back-to-back victories after defeating McClain 4-2 on Tuesday in FAC action.

“This is the best we’ve felt as a team all season,” Jackson’s Michael Parana said. “Starting the way we did was kind of a low point for us, and it didn’t feel like much was happening. We’re still down some guys but to get this win was incredible.”

It was a particularly special day for Parana, who plays defensive back but found himself playing a scoring role instead.

Whether it was fortunate bounces or perfect corner kick placement, the sophomore connected on two goals to lead the Ironmen.

“Those were the first two goals of my high school career,” Parana said. “I played last year as well, but I was in the back so I never had those chances, but it was amazing to score.”

Parana wasn’t alone in the attack though. Much of Jackson’s opportunities were created by the footwork and ball placement from senior Ashton Swain, who finished with three assists on the night.

“I always look to see where the defenders are set up before deciding where to go,” Swain said. “Most of the defenders on McClain were set up on the front post and only had three guys on the back post, so it was an easy choice about where to go every time.”

However, it was the Tigers who drew first blood when Jase Allison outraced Jackson’s back line and connected with the back of the net to take a 1-0 lead.

The Ironmen answered back as Swain sent a corner kick right to Nolan Haislop and he did the rest to tie the game 1-1.

Later in the half, McClain was awarded a penalty shot, and Haydon Hice sent it into the back of the net. But Jackson’s Coen Davis responded.

Off another assist from Swain, the sophomore sent one across the goal line to tie the game 2-2 at halftime.

With momentum on their side, the soccer Gods gave Jackson a small favor. Just seven minutes into the second half, Parana was streaking down the field, and the ball took a funny bounce off the keeper’s hands.

All that left was Parana to nudge it across the line and Jackson now led 3-2. He later put the finishing touches on his night with his second goal off a corner kick from Swain to secure a Jackson victory.

“After making that goal and going up 3-2, I knew with the confidence I was playing with that I could bring everyone up as well,” Parana said. “From that point, I knew we weren’t losing.”

Don’t look now, but it seems like Jackson girls soccer is picking up steam and finding some confidence.

It was aggressive out of the gates and maintained ball possession throughout the evening, earning the victory over McClain in FAC action on Tuesday.

“We’ve been working a lot more on playing the feet and moving as we play the ball to find each other,” Jackson’s Abby Seimetz said. “It’s definitely made a huge difference within our teamwork and with our ball control.”

Just a little over two minutes into the game, Jackson struck as Abby Seimetz sent a cross to Sydney Fain and she connected on a goal for a quick 1-0 lead.

“Our forwards are always there in the middle, so I know I can count on them when I play on the wing,” Seimetz said. “I knew Sydney would be there, and luckily it was a hard cross, and (McClain’s) goalie stumbled a little bit, so that made it a little easier.”

With no sign of letting up anytime soon, the Ironladies continued to take the fight to the Tigers, who struggled early to string together consistent passes.

Minutes later, Makayla Wyant received a pass and took a dribble before firing a laser into the back of the net to extend the lead up to 2-0.

“I had an open shot, so I took it,” Wyant said. “Our ball control has been great and we play three center midfielders, so we’ve been able to string together two or three passes to get a shot off.”

McClain answered back with a goal as Luca Matesic found the bottom right corner. However, the day belonged to Jackson as Jenna Lewis struck for a goal after the ball ricocheted off McClain’s goalie’s hands to seal the envelope for the win.

“We’re a dangerous team when we connect some passes,” Wyant said. “As long as we continue to do so, we have a chance to do something big.”