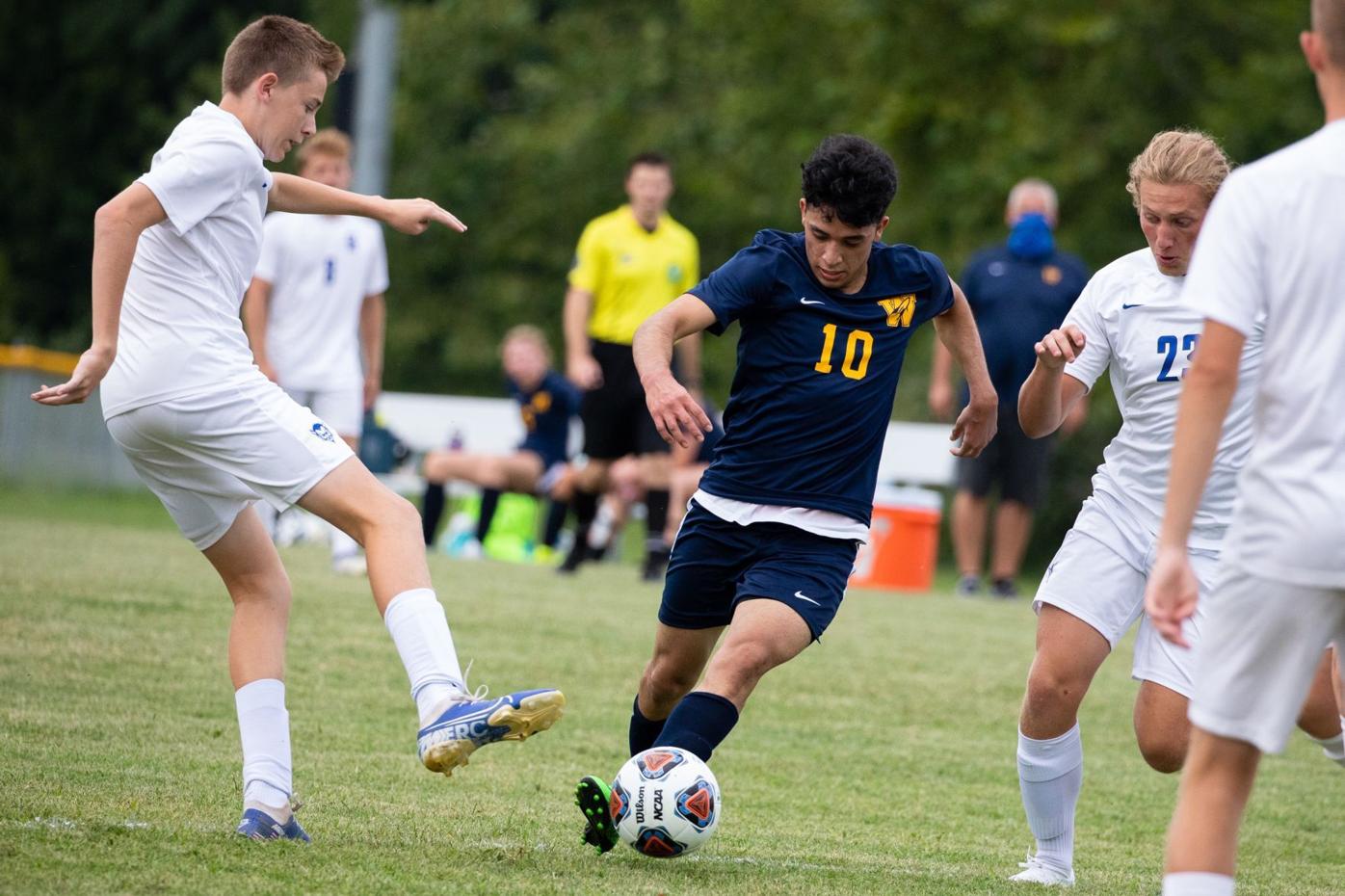 Wellston’s Marlon Guzman possesses the ball and drives between a pair of Gallia Academy defenders. Guzman scored a goal during the Golden Rockets’ 11-1 loss in their first soccer game in school history. 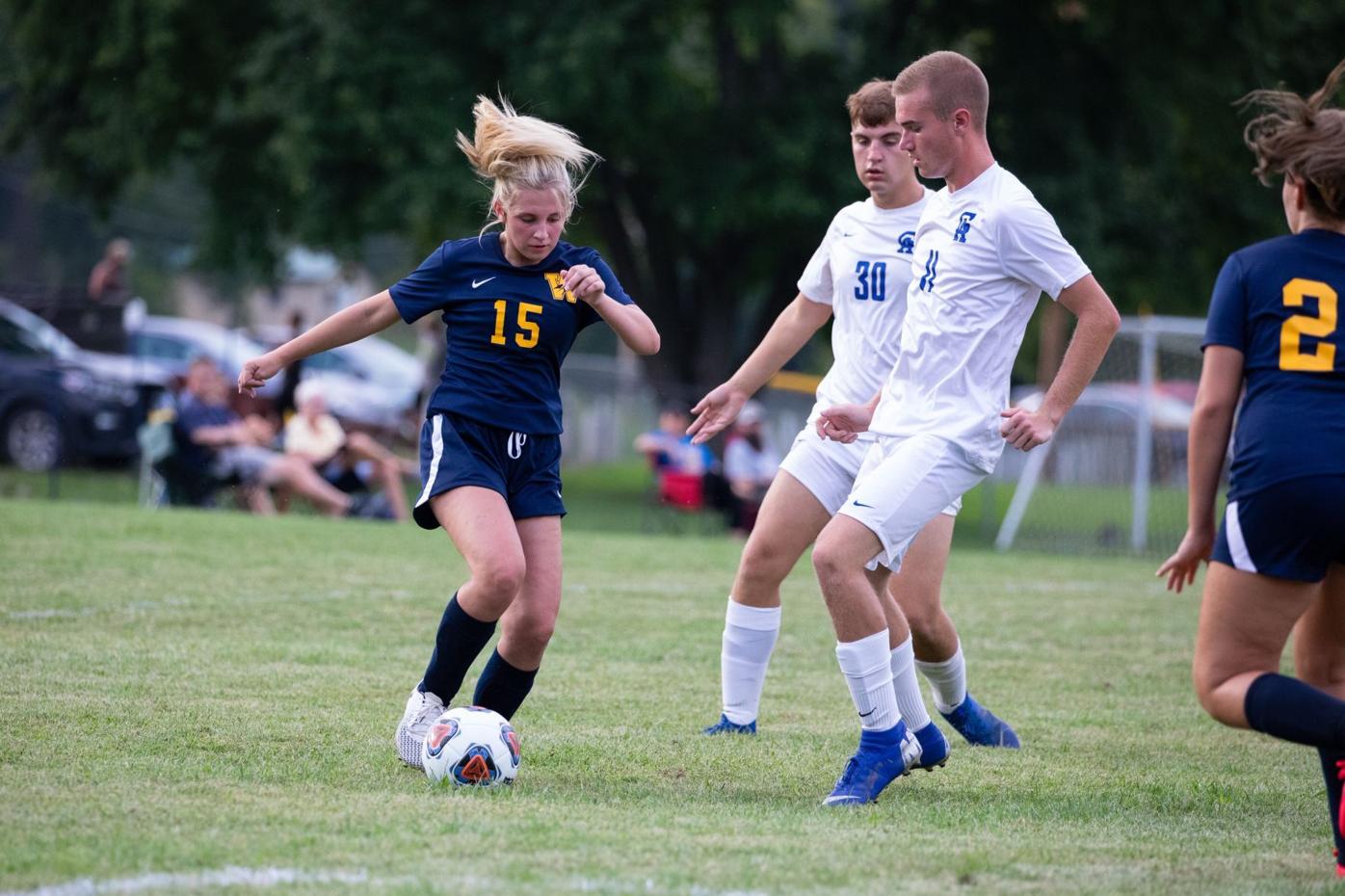 Wellston’s Lexus Justice controls the ball while a pair of Gallia Academy defenders close in on her during the Golden Rockets’ 11-1 loss in their first soccer game in school history. 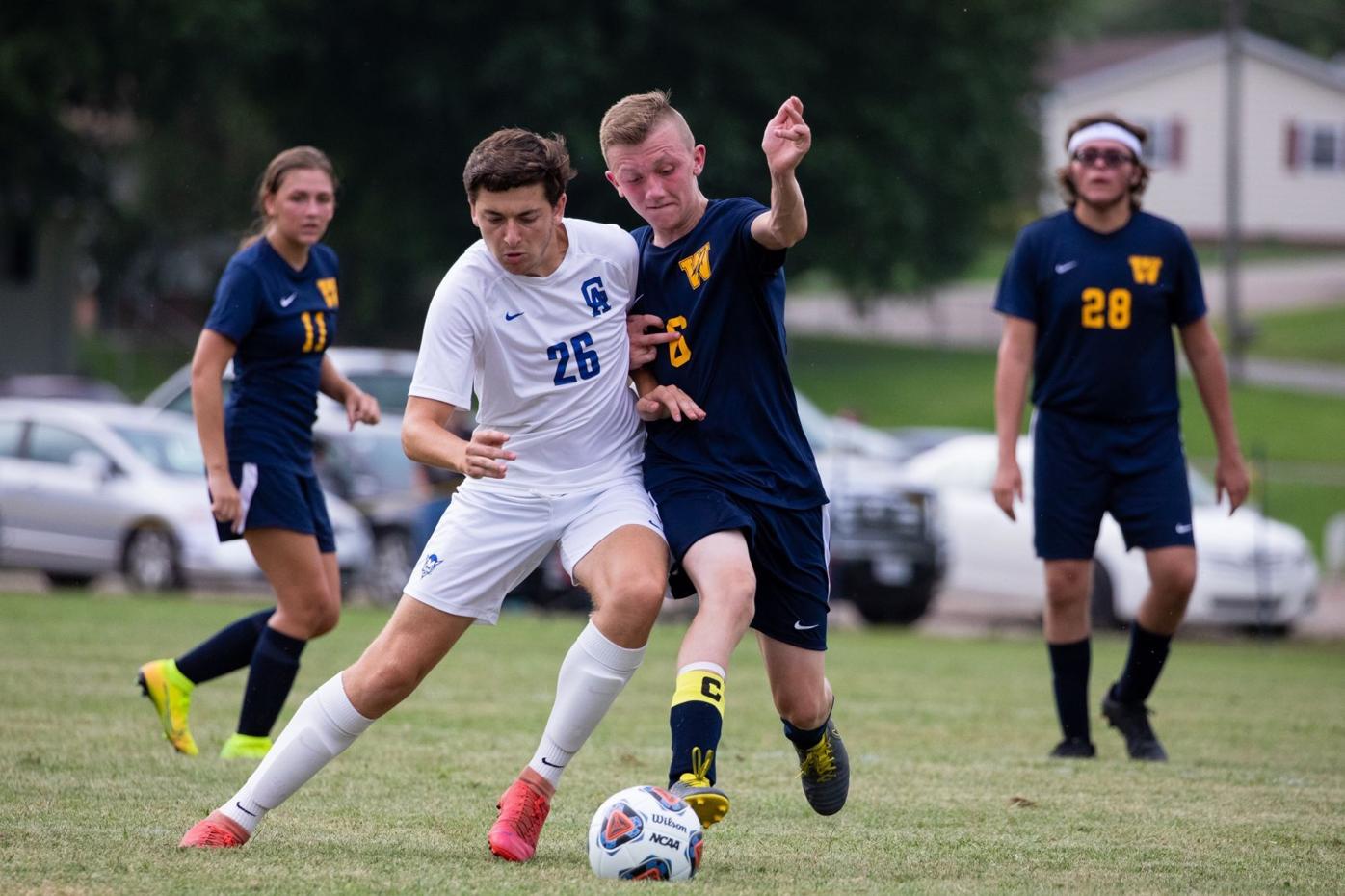 Wellston’s Marlon Guzman possesses the ball and drives between a pair of Gallia Academy defenders. Guzman scored a goal during the Golden Rockets’ 11-1 loss in their first soccer game in school history.

Wellston’s Lexus Justice controls the ball while a pair of Gallia Academy defenders close in on her during the Golden Rockets’ 11-1 loss in their first soccer game in school history.

WELLSTON — The lines were drawn; the nets were put up and the grass was freshly cut.

To the average person, that seems like nothing but for Wellston, it had meaning. Ground-breaking meaning.

For the first time in school history, Wellston fielded a soccer team comprised of 11 girls and five guys and took to the field on Wednesday against Gallia Academy.

Although Wellston knew going in it was going to be a rough day at the office, the final score wasn’t the most important thing that night, it was that a game finally happened.

Despite suffering an 11-1 loss to the Blue Devils, completing its first game and opening a new chapter in Wellston sports was worth the opening season loss.

“I’m extremely proud of how the kids play, especially for being a team that mostly freshman,” Wellston coach Anthony Brenner said. “Gallia is clearly the most experienced team, but I think we held our own fairly well for it being our first team playing a real game. A lot of these kids had never stepped on a soccer field until just earlier in the week, but I love the effort they gave.”

Gallia had some trouble breaking through in the first seven minutes. However, once it scored its first goal, the floodgates completely opened.

It went on to score four more goals and maintain a 5-0 lead at halftime, as Wellston had yet to record a shot attempt up to that point.

“I take nothing away from Gallia, they have an amazing group of young men who played really hard and fast,” Brenner said. “It was an excellent game they played.”

The scoring didn’t stop as it eventually got up to 10-0, then Wellston’s Marlon Guzman made program history by scoring its first-ever goal.

However, that goal wasn’t the only bright spot for the Golden Rockets as goalkeeper Adam Kanter came up with more than 20 saves on the evening.

“He played amazing in the goal,” Brenner said. “We only have five or six kids who have ever played soccer before today, but luckily he was one of them so he knew what to do and expect. He did everything possible to give us a chance to get back in the game despite the scoreboard saying otherwise.”

The wins may not pile up this year, and Brenner is well aware of that. No program has winning success in its first year, but there has to be a starting point where a foundation is established.

Wednesday was that foundation’s starting point, and every game after this continues to build up the program brick by brick.

“It’s a tough start, but it’s also going to be a tough year,” Brenner said. “We’re building a team and working out a ton of things that every first-year program endures. It’s going to take some time to build a program, but I’m focused on us getting better and better every day. I’m confident that as long as this group of freshman continue practicing and improving, than we can have an all-star team by the time they’re juniors and seniors.”

Thanks for the article :). Evan Canter is our goalie :).