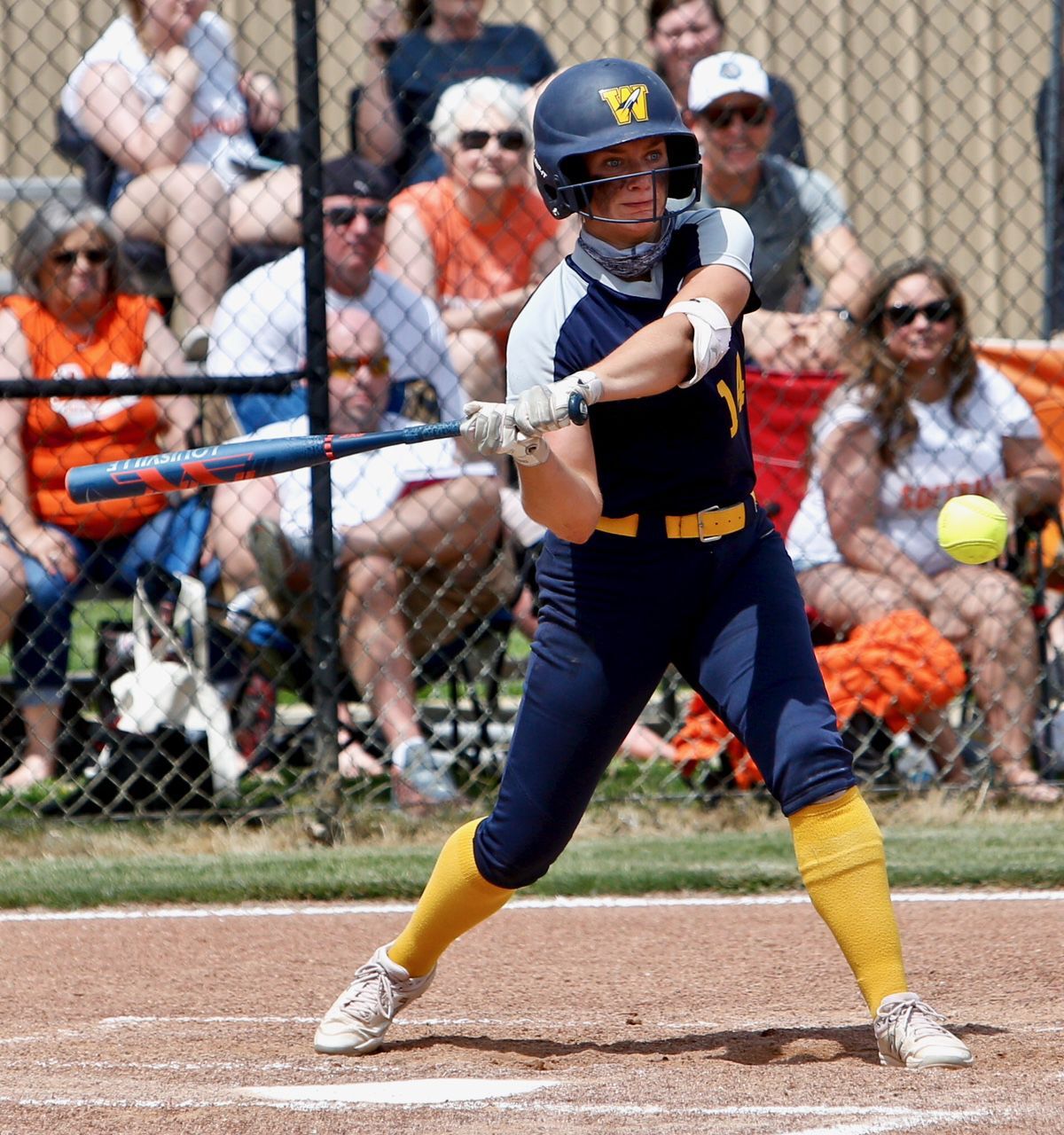 Wellston’s Jenna Johnston focuses in and swing at a ball that resulted in a double during the Golden Rockets’ 10-2 loss in a Division III district championship to Wheelersburg on Saturday. 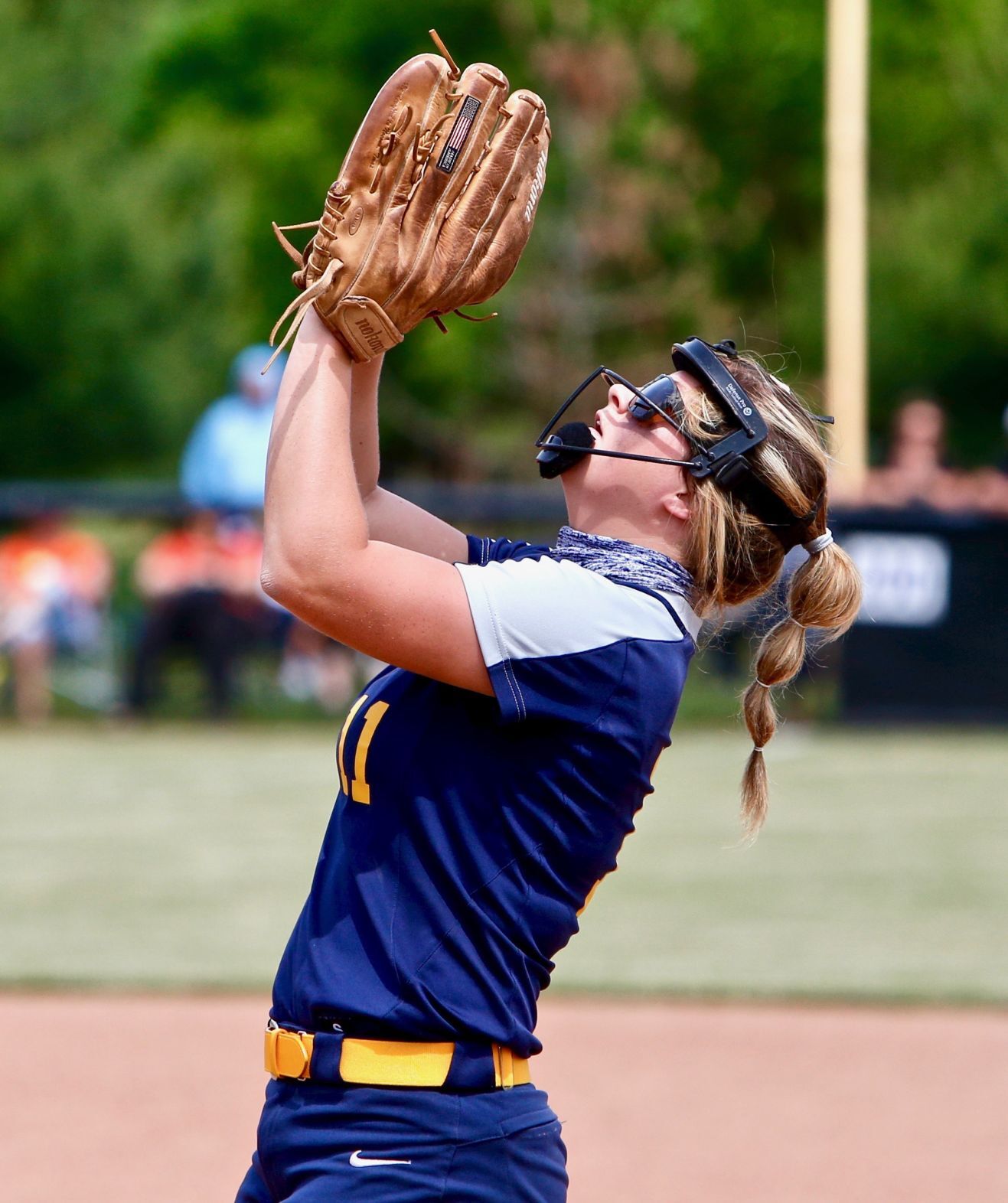 Wellston’s Kenna Kilgour camps under a pop fly for an out during the Golden Rockets’ 10-2 loss in a Division III district championship to Wheelersburg on Saturday. 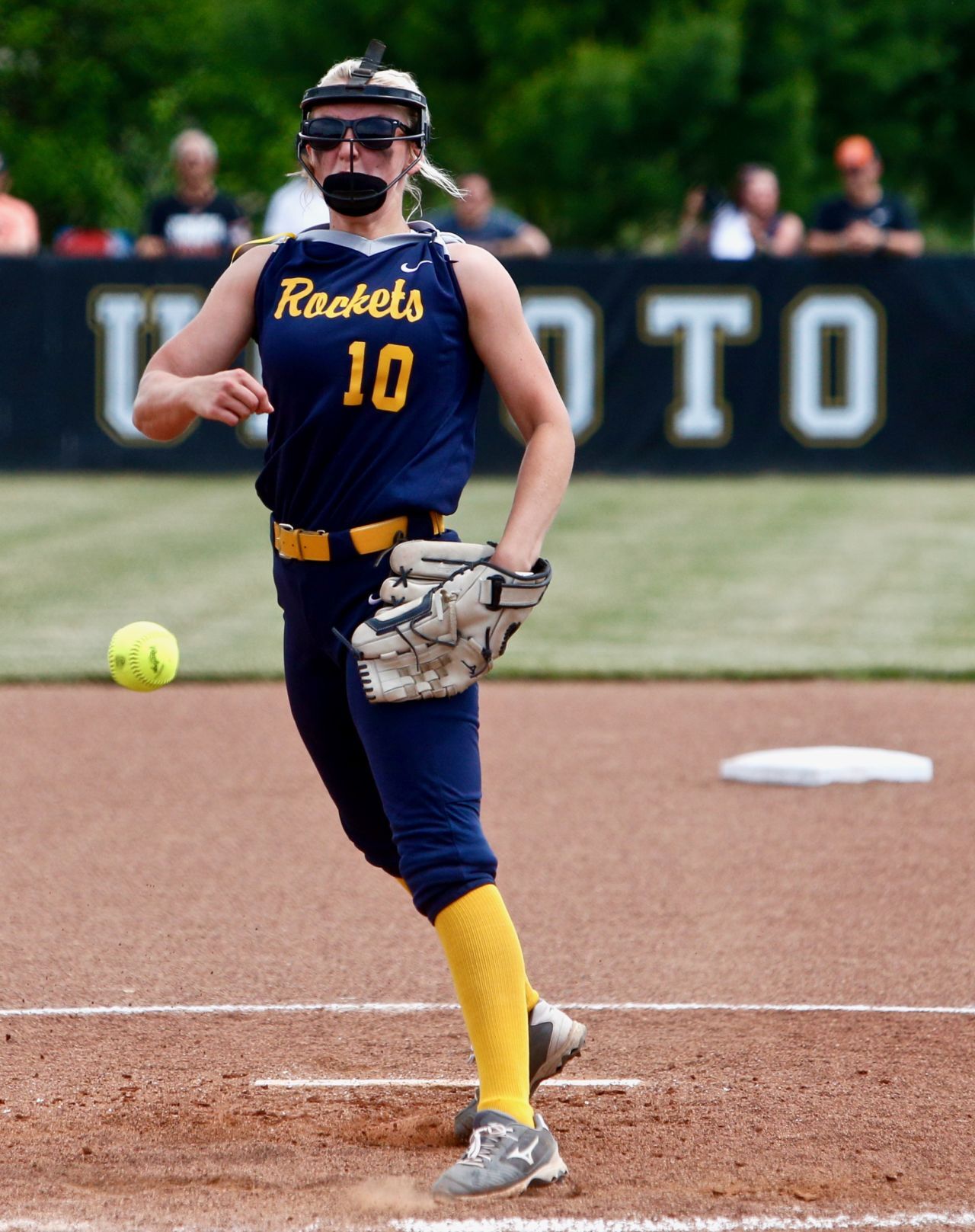 Wellston’s Kamryn Karr delivers a pitch during the Golden Rockets’ 10-2 loss in a Division III district championship to Wheelersburg on Saturday.

CHILLICOTHE — Next season will be a different outcome, but for now, Wellston has to deal with the sting.

Wheelersburg pounded out 11 hits and took advantage of three errors as it breezed its way to a 10-2 victory over the Golden Rockets in a Division III district final on Saturday at Unioto High School.

“The girls who were a part of that 2019 loss have talked this whole week about having unfinished business,” Wheelersburg coach Teresa Ruby said. “It always leaves a bad taste in your mouth when you lose the final game of the season, even more so since we had to wait almost two years to try and avenge that. But the girls came ready to get the job done.”

Although Wheelersburg began the game with two runners on base, nothing materialized from it as Kamryn Karr got a pair of strikeouts and a groundout to end the threat.

But that was the only time during the game it didn’t cash in on a scoring opportunity. With the runner on the bottom of the second, Brynley Preston smoked an RBI single to left field that put the Pirates ahead 1-0.

With the Pirates finally a little relaxed, Kiera Kennard added to the comfort in the next inning and ripped a two-run double to center field that extended the lead to 3-0.

It was off to the races from that point on. A throwing error followed by a passed ball plated two more runs, pushing the lead up to 5-0. However, the Pirates weren’t finished in the inning just yet.

After another passed ball scored a run, Macee Eaton drilled a two-run double to center field that took any wind that was left completely out of Wellston’s sails.

“All three of our pitchers I thought did a really solid job in the circle,” Wellston coach Jim Hall said. “But Wheelersburg just hit the cover off of the ball. We had one bad inning, and at this level of the tournament, it costs you more than just a game. It costs you the season.”

As the Pirates piled up the runs, Andi Jo Howard continued to settle in and make it look effortless in the circle.

Although Wellston made contact with her pitches, it resulted mostly in pop outs or line outs of some sort. But Howard also flashed the ability to blow her fastball by batters or use the off speed pitches to get them chasing.

In turn, it led to her going the distance for the win, allowing just two earned runs and striking out five batters in the process.

“I wasn’t really sure what to expect from such a young team at this stage of the tournament,” Ruby said. “But I was really happy with our focus and we had some quality at-bats in the first five innings. Jo pitched an excellent game, defensively we were solid and didn’t open the door for Wellston to capitalize on any mistakes.”

Wellston got on the board with an RBI single from Sadie Henry, only for the Golden Rockets to give up two more runs with a fielding error.

That final run came on an RBI double in the top of the seventh from Jenna Johnston, but the Pirates nailed down the final out to put the game on ice.

Johnston finished 3-for-3 with a triple, double and an RBI, while Henry was 1-for-3 with an RBI as well.

“We have the same team coming back next season, with even more talent coming up so this is a painful, yet helpful lesson,” Hall said. “In 2019 we made to the a district semifinal, but lost in eight innings. This year we make it to a district final. So if the progression remains the same, good things will happen next year.”

With 11 of the Wellston’s 12 players returning next season, and a year of experience under their belts, a repeat season with a district title to boot isn’t out of the question.

However, its quest to bring the hardware back to Wellston will happen without its lone senior, Kenna Kilgour.

“She’s a fiery competitor and an absolute gamer,” Hall said. “It’ll be rough to replace her because she does so much things for us on both sides of the ball. She’s an excellent second baseman and swings a great bat, but more importantly, she brings the energy to our dugout. Replacing her spot won’t be easy and she’ll be missed for sure.”