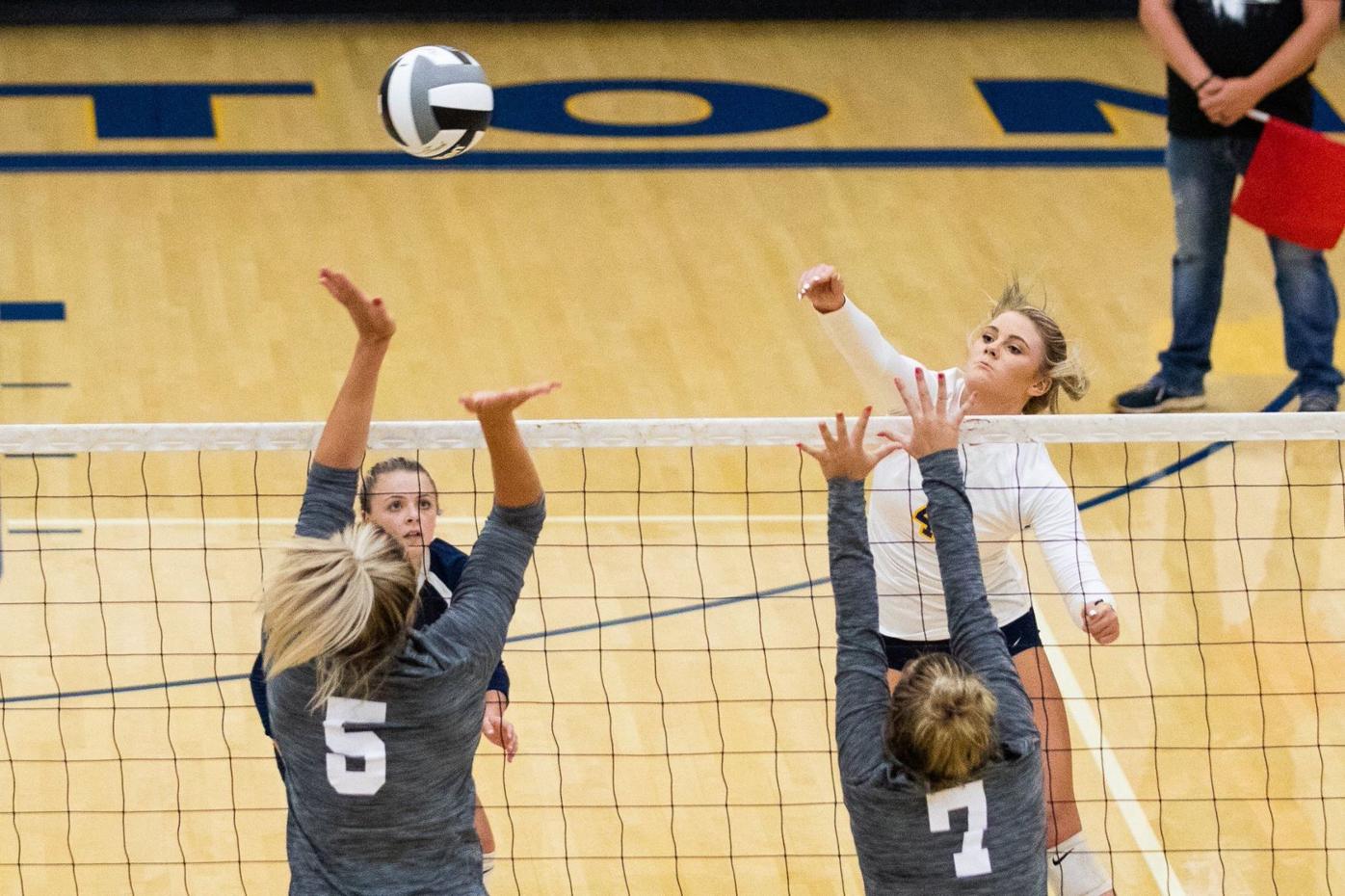 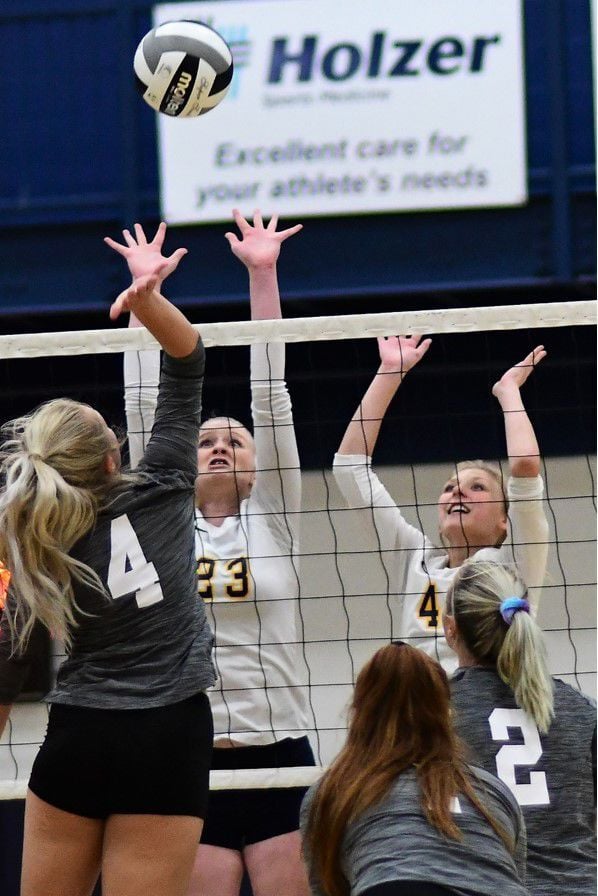 Wellston’s Kloey Pennington (center) and Sadie Henry (right) attempt to block a shot from Oak Hill’s Brynna Boggs (left) during the Golden Rockets’ straight-set victory 25-17, 25-19, 25-22 over the Oaks on Monday. 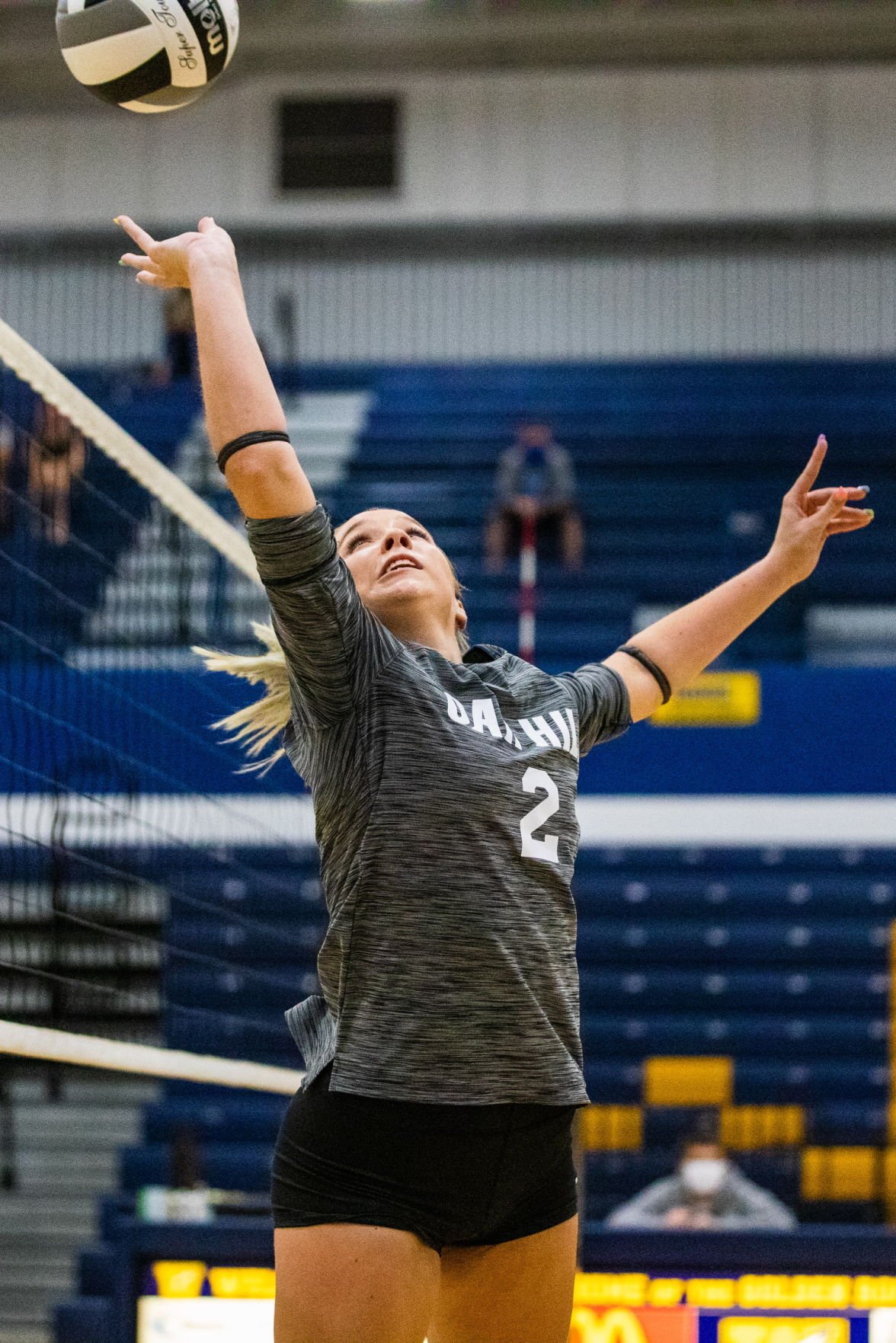 Oak Hill’s Baylee Howell reaches for the ball and sends it over the net during Wellston’s straight-set victory 25-17, 25-19, 25-22 over the Oaks on Monday. 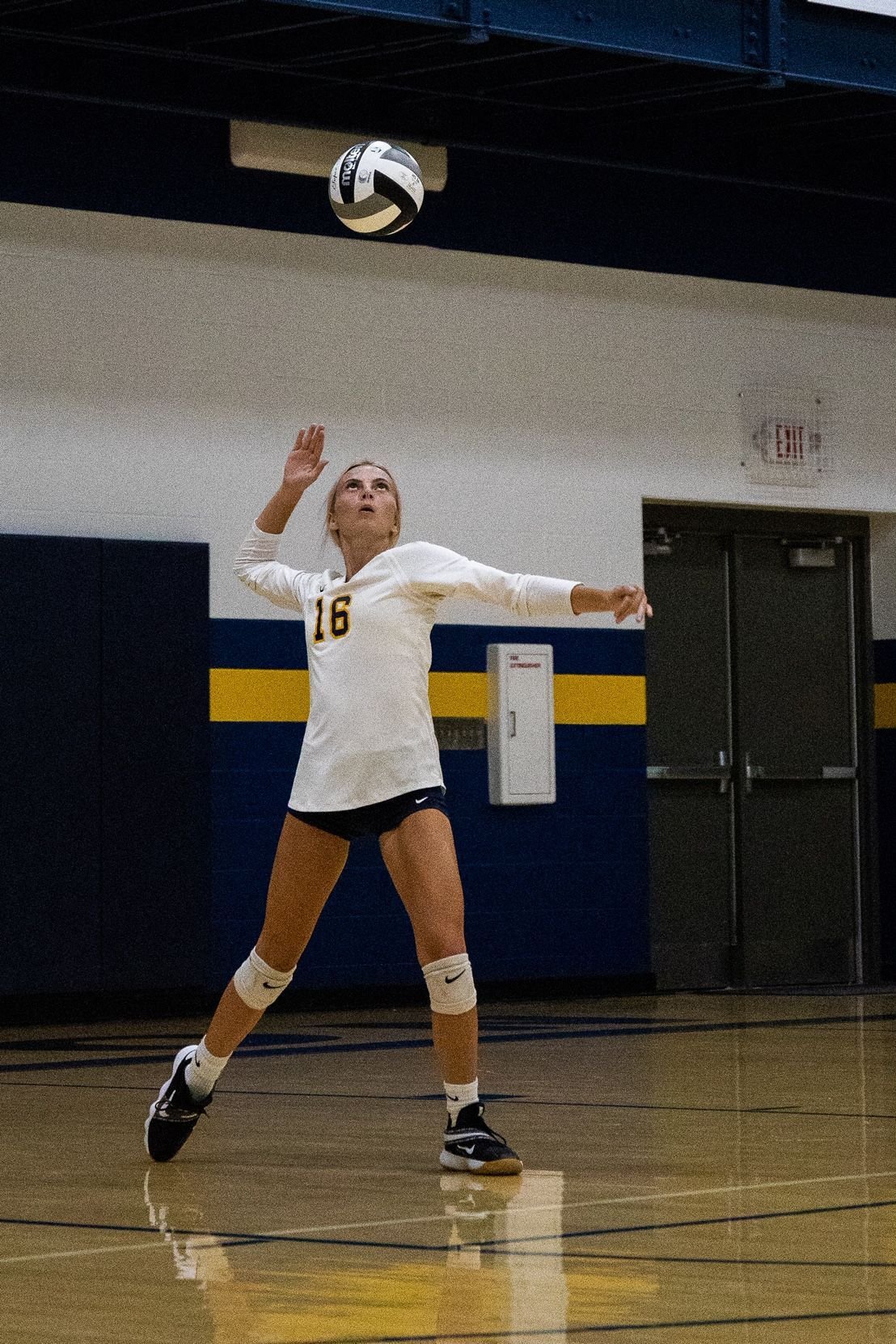 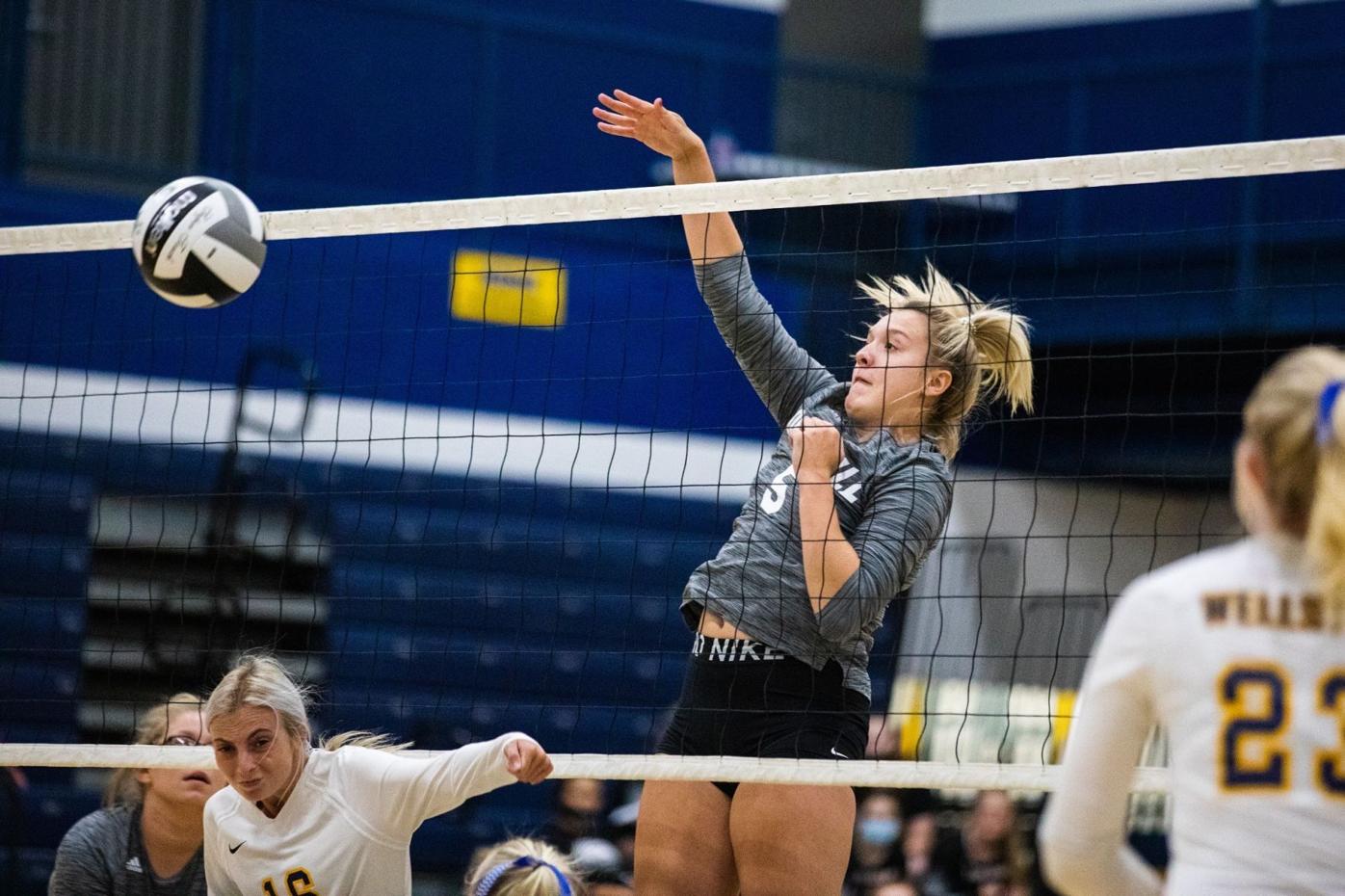 Wellston’s Kloey Pennington (center) and Sadie Henry (right) attempt to block a shot from Oak Hill’s Brynna Boggs (left) during the Golden Rockets’ straight-set victory 25-17, 25-19, 25-22 over the Oaks on Monday.

Oak Hill’s Baylee Howell reaches for the ball and sends it over the net during Wellston’s straight-set victory 25-17, 25-19, 25-22 over the Oaks on Monday.

WELLSTON — One thing was abundantly clear on Monday; Sadie Henry was the best player on the court.

The Golden Rockets’ standout hitter imposed her will at the net and the serving line, tallying more than 10 kills and seven aces in the team’s sweep over Oak Hill 25-17, 25-19 and 25-22.

“What I love about Sadie is that she takes things personal sometimes, and this was one of those times,” Wellston coach Kaley Lower said. “She read something, took it personal and showed what she can do. This was her making a statement. We’ve set a high standard for ourselves and we’ll surprise some teams.”

On top of the victory, it marked the first win for Lower in her head coaching debut.

“Getting the first win is great, but I’m completely proud of these girls,” Lower said. “We come out and hit the ball really well, but we didn’t play scared either and that’s a big thing for us. Sometimes our nerves can get the best of us and we make some mistakes, however, we stayed focus and I couldn’t be more pleased with that.”

Wellston came out out the gates swinging and on the attack. After a kill from Kloey Pennington tied the match 4-4, she stepped back to the serving line and recorded back-to-back aces to put it ahead 8-4.

From that point on, it was all Wellston as kills from Pennington and Brinley Patton closed out the first set.

“Kloey has definitely stepped up a lot from last year to this year,” junior hitter Nevaeh Ousley said. “She’s such an important part of what we do on the floor, and she knows it so she carries that responsibility on her shoulders. She came out really strong and played great.”

After taking an early lead, the junior hitter racked up three kills between an ace from Taylar Spencer to put the Golden Rockets ahead 7-1.

“The main difference with us is our mentality. We came out more hungry and ready to play,” Ousley said. “We want to prove everyone wrong and have teams take us serious. This was a good start to that.”

It was simply just wash, rinse and repeat in the third set. Pennington notched a pair of kills early, followed by an ace from Ousley, a kill and three aces from Henry to put Wellston ahead 15-6.

Oak Hill later made a rally behind Chloe Chambers who ripped off a pair of kills, blocks and three aces to cut the lead down to 22-21.

But in the end, Henry was too much to handle as she came through with a kill and the final ace of 15 Wellston had on the evening to ultimately seal the envelope for the win.

“We didn’t really gel together as well when last season started, it sort of felt like we were alone on the court,” Ousley said. “But it’s just a completely different feel this year. Our coaches have pushed us and worked us to be better every single day. It’s a different mindset that we have, and we expect to be successful.”

Oak Hill squares off against Valley at home on Thursday, at Minford on Monday and at Eastern on Tuesday.