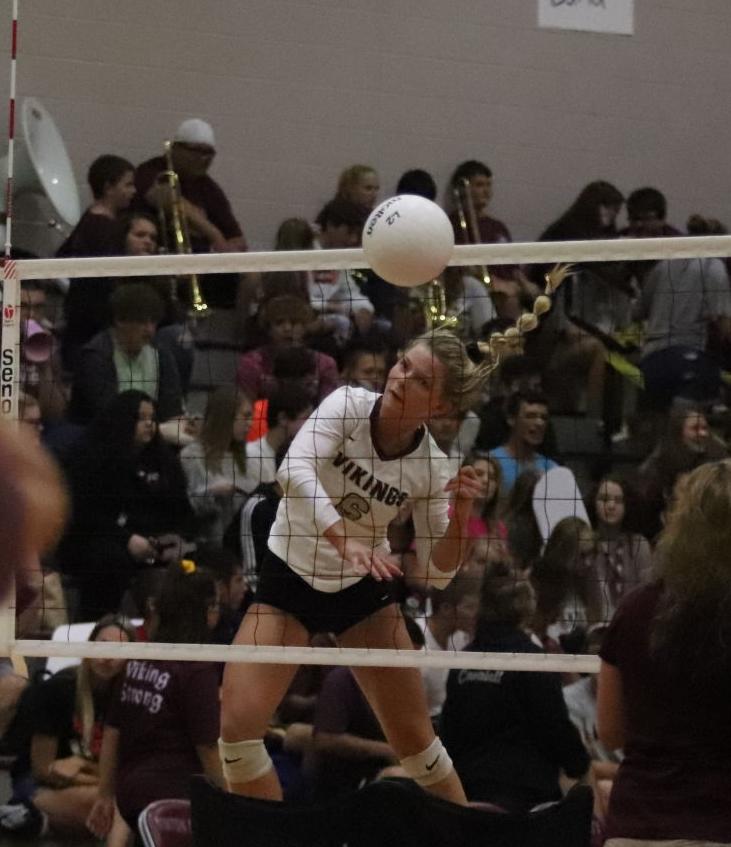 Vinton County’s Maylea Huff has been a mainstay for the Vikings throughout the four years of ups and downs. Her 108 kills ranks third on the team, which has a chance to claim their first outright TVC championship this week. 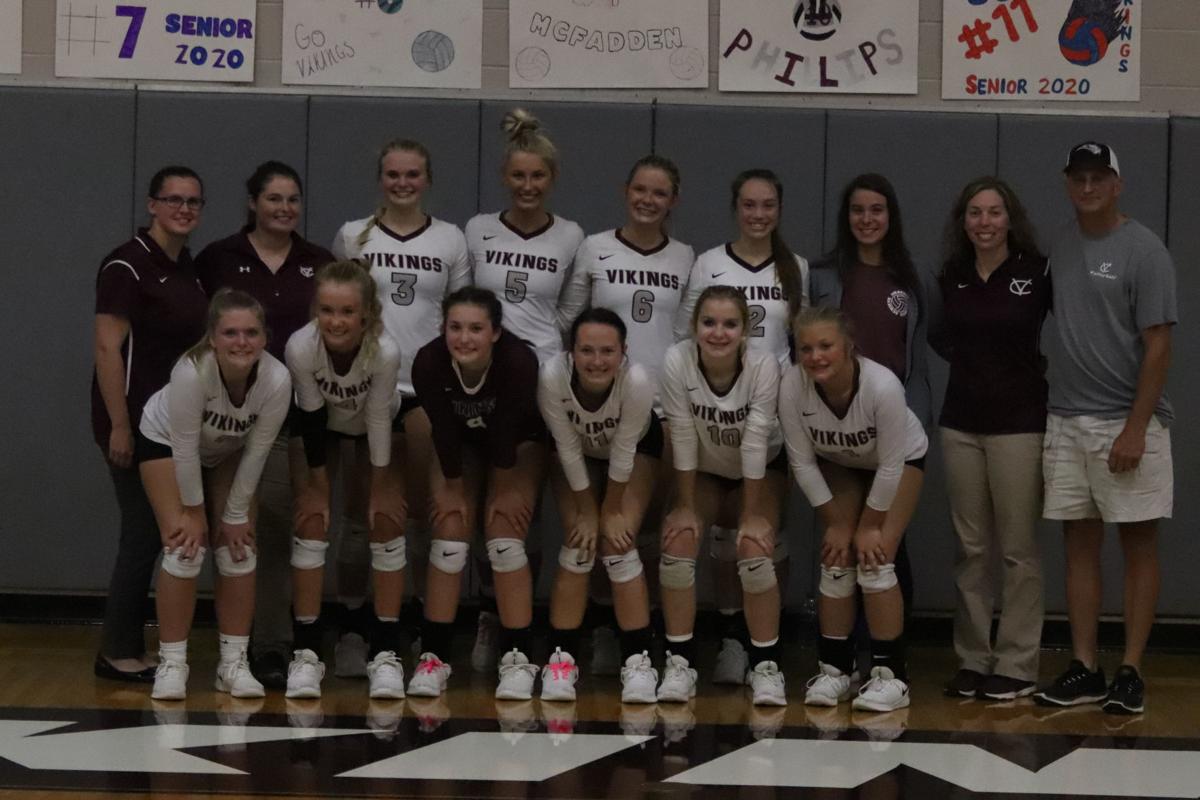 Vinton County’s volleyball team poses for a picture after defeating Alexander for the second time this season. 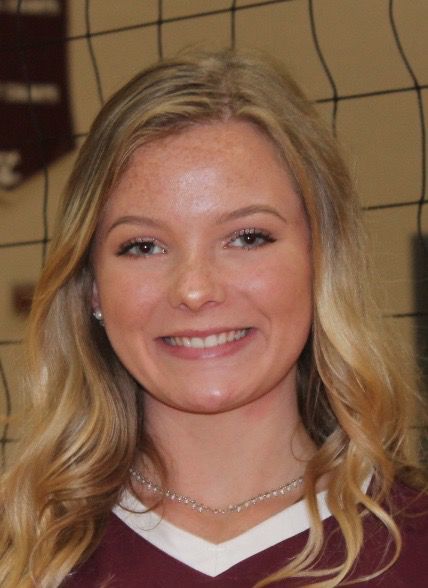 Vinton County’s Maylea Huff has been a mainstay for the Vikings throughout the four years of ups and downs. Her 108 kills ranks third on the team, which has a chance to claim their first outright TVC championship this week.

Vinton County’s volleyball team poses for a picture after defeating Alexander for the second time this season.

Note: This sports Q&A appears in the Wednesday, Oct. 9 newspaper on Page B4.

McARTHUR — It’s no secret that volleyball at Vinton County has been less than successful for numerous years.

No conference championships since 1984 (co-champs with Belpre), no victories in tournament plays and very few winnings seasons.

However, all of that has changed in the past two years and Maylea Huff has been one of the focal points at the center of the turnaround.

This season, the senior middle hitter is complied 145 digs, 106 kills and 32 aces as the Vikings sit at 18-1 and one game away from winning their first-ever outright TVC championship.

The Courier caught up with Huff to talk about Vinton County’s turnaround, playing for coach Ashley Graves, beating Alexander and much more.

Question: Your first two years, Vinton County won a total of five games. Then last year, you girls win 16 games and now you’re 18-1. Did you ever think this big of a transition was ever going to happen?

Huff: I knew going into my junior year that things were going to be much different. I knew the players coming in were going to be more intense and more focused on the game than who I had bene playing with over the past few years. But I never thought that we would be where we are right now. Our goal back in my freshman was to put a number on the banner. We knew it was going to be really hard and it was going to take a lot of work, but it’s all worked out. I’d give the shirt off my back for these girls and I knew they’d do the same for me.

Q: What were some of the biggest lessons and hardships from the first two years that you’ve taken and applied to those last two years?

H: There were times it was really hard to focus in the first two years because we’d go into a game already thinking that we didn’t have a chance to win. Josie Hembree and myself have been on varsity since our freshman year, we’ve always tried to be leaders and we played when others didn’t want to play and still give it our all no matter what the score was. It can be hard as a freshman trying to pick up a senior so it wasn’t the easiest. I think Coach (Ashley) Graves recognized our effort and appreciated that we still played hard. All of those rough games and struggles have shaped how we play and have led us to this moment.

Q: Speaking of your coach, she’s one of the most fiery, passionate coaches you could possibly come across. What is it like playing for her over the years?

H: It’s been a lot of fun playing for her and she’s such a great coach. We all get along with her really well. She’s very personable and close with all of us. She does get very fired up, and it’s a little funny at times to see her get yellow cards but we get her yellow roses the next day to make up for it. Her along with Coach Perry have been our number one supporters and the others coaches which is why we have a tight bond as a team.

Q: There’s only three seniors on this team, and eight sophomores. You mentioned that you’ve always tried to be a leader. What has it’s been like being a leader of this team?

H: I think being on varsity since my freshman year has helped a lot. I remember going from middle school volleyball to varsity was a dramatic difference, but Coach Graves was always there for me when I was down and she reminded me how important it was to be a leader on the team. I’m the oldest of five kids so I think leadership as always been something I’m used to. I’ve taken on the role the best I could and I’m very proud of these sophomores. I remember that I was scared to death when I started out, but I’ve seen them getting more comfortable and step their game up.

Q: For you alongside with Josie and Sydnee (Knox), as the three seniors, what has this season been like?

H: This is been the season we’ve been fighting for our entire high school careers. I know it’s been tough for Sydnee having to watch since she got hurt during the Oak Hill game a while ago, but she’s been a great teammate and support us the whole way. Winning our first sectional game last year was crazy for myself and Josie. Every game we win and every step we take to get closer to our goal is an unreal feeling because of where we started four years ago. Working this hard for four years and finally getting where we want to be has taught us more than just the game of volleyball.

Q: How did earning that sectional victory last season give you and the team that fire to want to take that next step this season?

H: Winning that game really showed us that when we work and put our minds to something that we can accomplish anything and that we are good enough. Vinton County has never had a good reputation when it comes to volleyball, but our community and coaches have believed in us all, we just needed to believe in ourselves. We put in so much time practicing on Saturdays and Sundays to improve ourselves and those games against Alexander showed us that it all pays off.

Q: Earning those two wins over Alexander after years of getting beaten by them for the pass three years, what did those two moments mean to you?

H: It was truly overwhelming. They have so many talented players starting with Karsyn Raines, and there were so many nerves running through me for both games. But its showed that we can play, hang and beat the top teams if we put our best foot forward and play how we’re capable. I don’t know if we played our best game the second time, but it was enough to win yet also prove to us that we have another level we can go to. It was amazing to have the band, a ton of community support, the youth program at the game, it meant a lot to us.

Q: You’re one game away from putting ‘2019’ on the volleyball banner as conference champions. When it’s all said and done, volleyball season is over and you graduate, what do you hope is the legacy that you leave behind here at Vinton County?

H: I had no idea we didn’t win it outright until a few days ago, but it’s been running all throughout my head knowing that we have a chance to end the drought. It means a lot to me knowing that when I come back to watch my little sisters play that I can look up and see that banner and remember that I was a part of that team, which is a huge deal for me. We’re shooting for the stars come tournament time. We believe that we make a deep run as long as we focus and play every game like it’s our last. As far as legacy goes, I want to go down as being part of the team that changed the perception of Vinton County volleyball. I want people to realize that we worked incredibly hard to turn things around and that we’re here to stay.