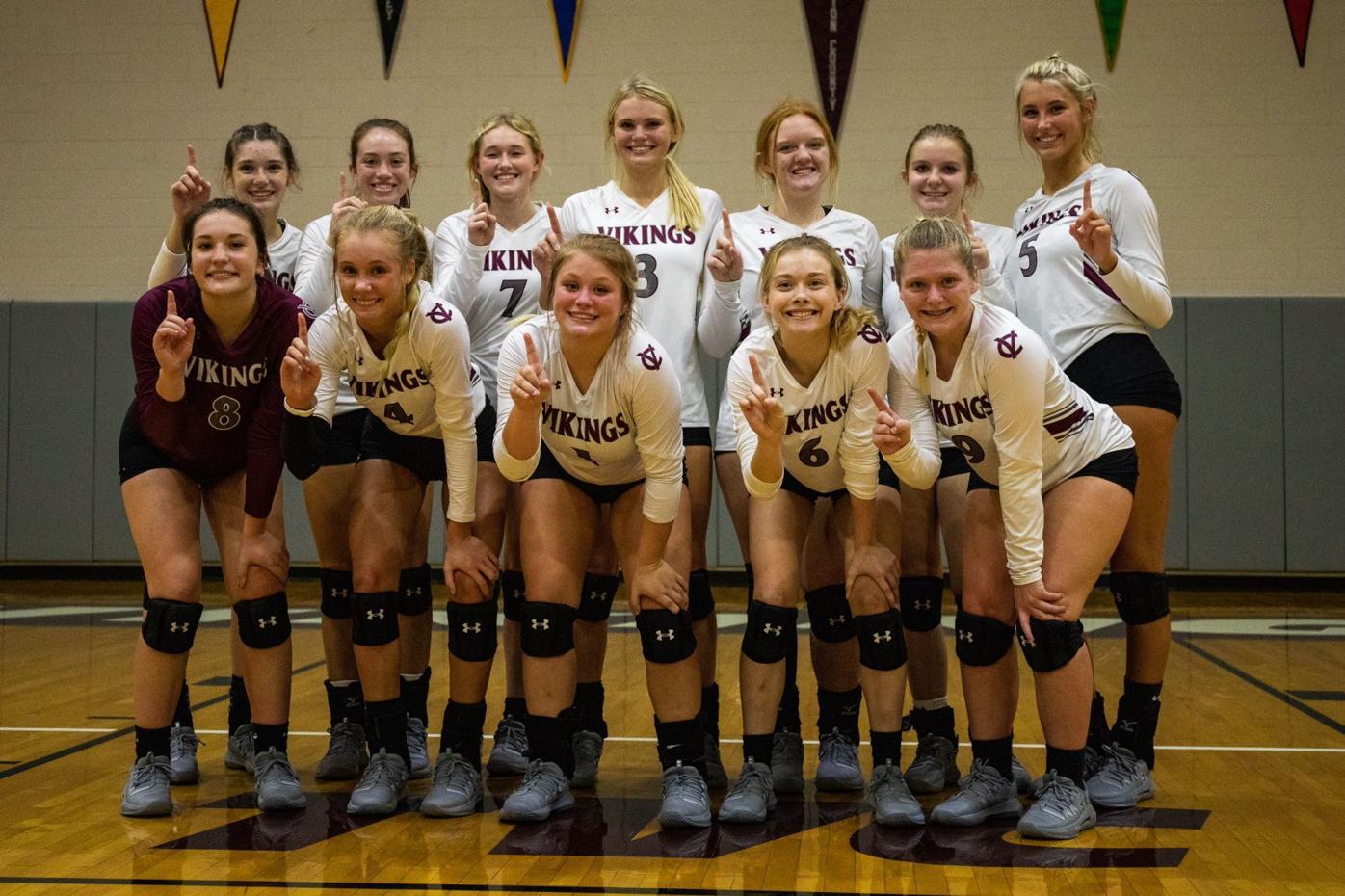 Vinton County poses after defeating Nelsonville-York in four sets, claiming the TVC championship in back-to-back seasons for the first time in school history. 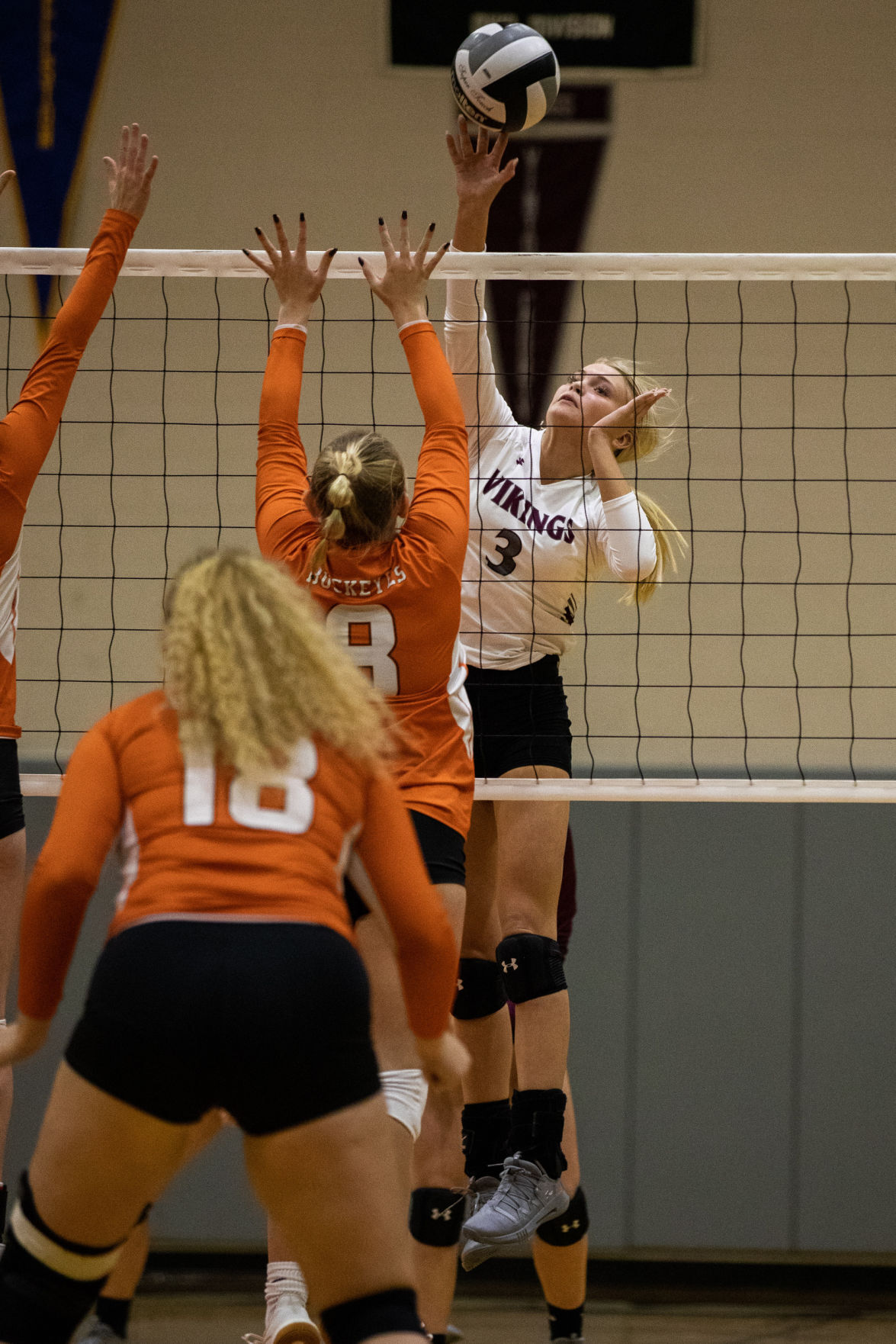 Vinton County's Sydney Smith attempts a kill over Nelsonville-York's Ashleigh Cantrell in the Vikings' four-set victory over the Buckeyes on Tuesday. 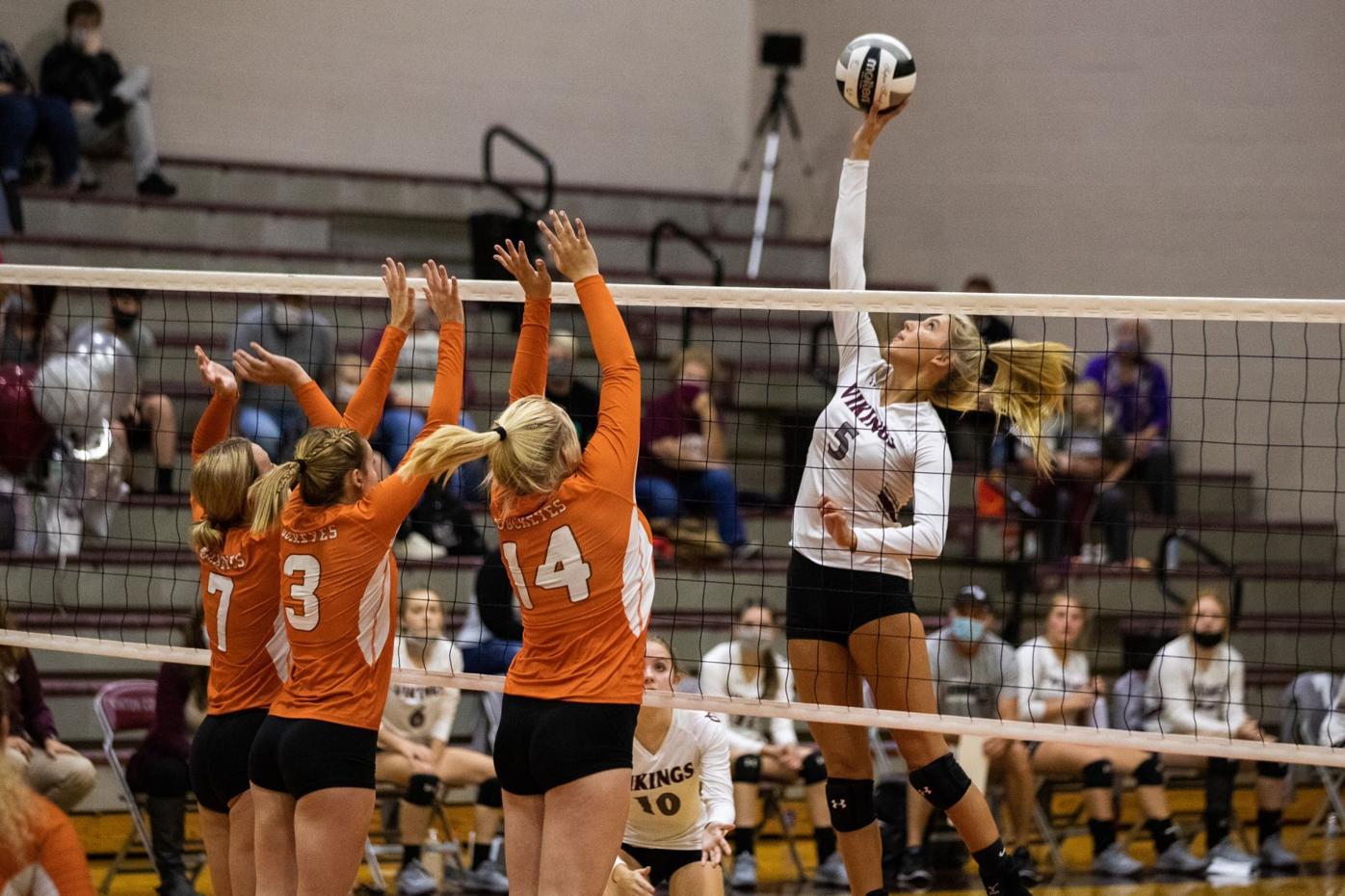 Vinton County's Zoey Kiefer goes for a kill over three Nelsonville-York defenders in the Vikings' four-set victory over the Buckeyes on Tuesday.

Vinton County poses after defeating Nelsonville-York in four sets, claiming the TVC championship in back-to-back seasons for the first time in school history.

Vinton County's Sydney Smith attempts a kill over Nelsonville-York's Ashleigh Cantrell in the Vikings' four-set victory over the Buckeyes on Tuesday.

Vinton County's Zoey Kiefer goes for a kill over three Nelsonville-York defenders in the Vikings' four-set victory over the Buckeyes on Tuesday.

McARTHUR — For a set and a half, panic set it and it seemed like destiny that the TVC championship was going to end in a three-way tie.

Showing its level of guts and grit, it pulled out the second set and dominated the rest of the way in its four-set victory (22-25, 25-22, 25-12, 25-21) over Nelsonville-York on Tuesday, capturing back-to-back TVC titles for the first time in school history.

"We walked into this game confident and knowing we weren't going to share the title," Vinton County's Sydney Smith said. "We should have won it outright, we deserved to win it outright and it was such an emotional, happy moment when that serving error happened for the final point."

Revenge was already on the minds of the Vikings as it was Nelsonville-York who handed the them their lone TVC loss in five sets earlier this season.

It's one thing to know what you're opponent is going to do at certain times, it's another thing to stop or contain it.

The Buckeyes trailed 15-10 in the first set, but kept their cool and just chipped away slowly before a kill from Chloe Lehman gave them an 18-17 lead.

From that point, it was a series of ties, the final one coming at 22-22. But N-Y's Mackenzie Hurd powered two kills and Ryleigh Griffin served an ace that gave the Buckeyes the first set.

They continued to pour it on the Vikings, who looked out of sorts and couldn't put points together. Although the Vikings managed to tie the game 14-14, N-Y went on a 6-0 run to push the lead up to 20-14.

"Nothing was going right at all. Our passing was off, our hitting was off, our energy was low and overall we were just down," Vinton County's Cameron Zinn said. "After the timeout was taken, we told ourselves this was for TVC and we needed to start swinging instead of tipping."

Zinn registered a kill, later followed by kills from Lacy Ward before a pair of aces from Zoey Kiefer capped a 9-1 run to give the Vikings a 23-21 lead.

After a serving error cut the game to 23-22, Ward got the kill followed by an ace for the win and tying the game at 1-1.

"Zoey did such an awesome job," Zinn said. "We started running some behinds and in fronts to mix it up since she was getting triple teamed at times. Anything to help her avoid getting blocked. Our passing was much better also so that we could give her chances at the ball. Lacy did an amazing job as well staying with it and closing the game for us."

With momentum now on Vinton County's side, it was time to put their foot down and establish its dominance.

Despite her swing being a little hit and miss in the first two sets, Smith found her rhythm in the third set.

Following a Zinn ace, the junior hitter began swinging with authority and piled four kills in a row to put the Vikings ahead 7-1.

As the lead grew bigger and bigger, Smith only seemed to get stronger as she notched three more of her nine kills in the third set. The final kill put the Vikings ahead by double digits before closing out for the 2-1 set lead.

"I feel like nerves got the best of us early, but getting that second set allowed us to calm down," Smith said. "I was struggling big time in the first two sets, but finally found a rhythm and some open spots in the third. Once that happened, it allowed us to just push forward and keep the momentum."

The Vikings took the fourth set lead 7-6 and began to create some distance behind Smith and Zinn before a Taylor Houdasheldt ace put them ahead 18-14.

However, the Buckeyes answered back with a 6-2 run capped by a kill from Hurd for a 20-20 tie.

Zinn and Smith connected back-to-back kills, then N-Y thought it had a point on a kill from Hurd that hit off a Viking defender before going out of bounds, but it was ruled out of bounds for a Viking point.

Both teams traded points and then the Buckeyes committed a serving error that sealed the deal to keep the TVC championship at Vinton County.

"To be honest, last year we were a little shocked that we won the TVC and did it while being undefeated in conference play," Zinn said. "This year we knew we had to win again, and even though it wasn't undefeated, we still did it and I couldn't be more proud of this team."