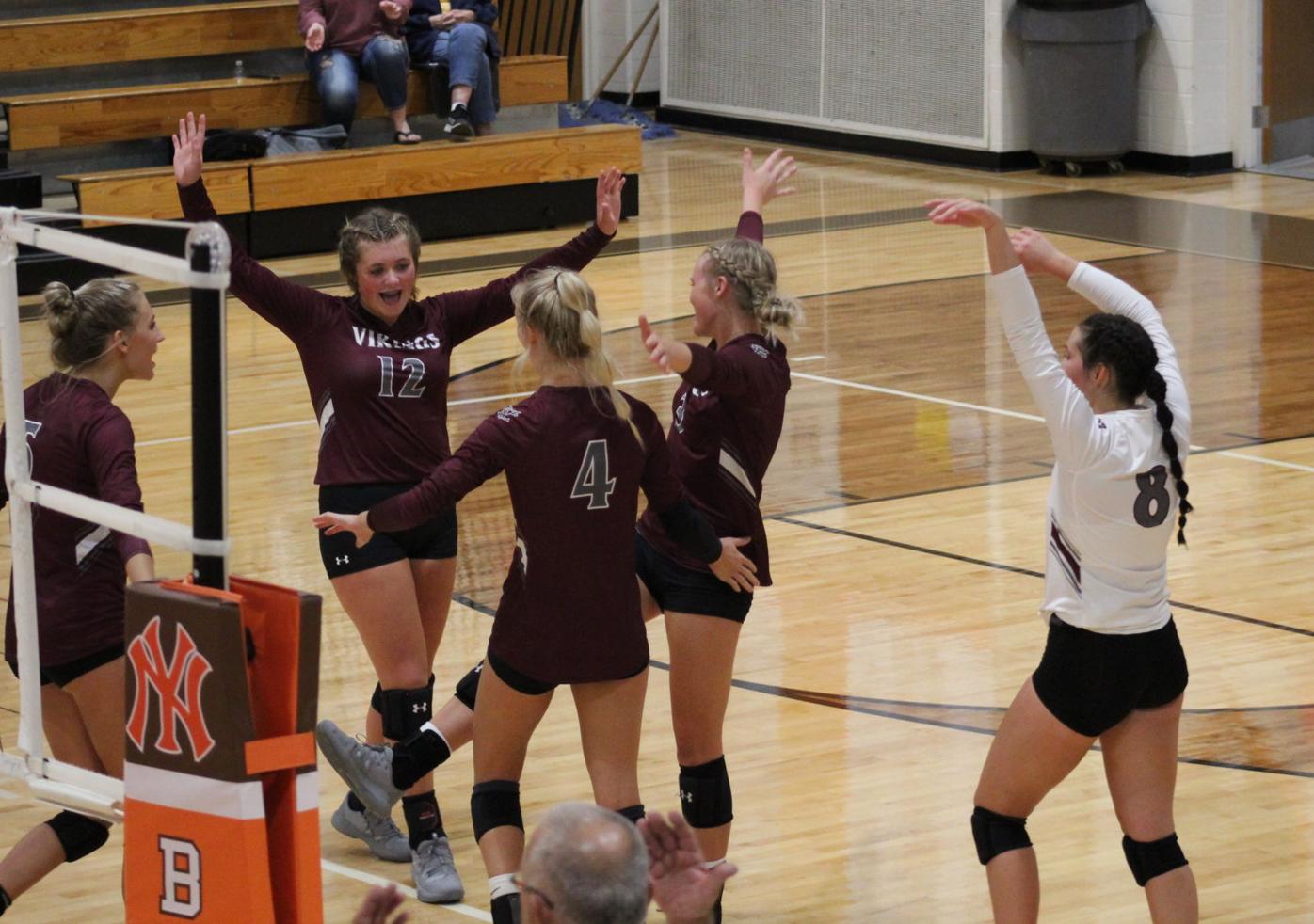 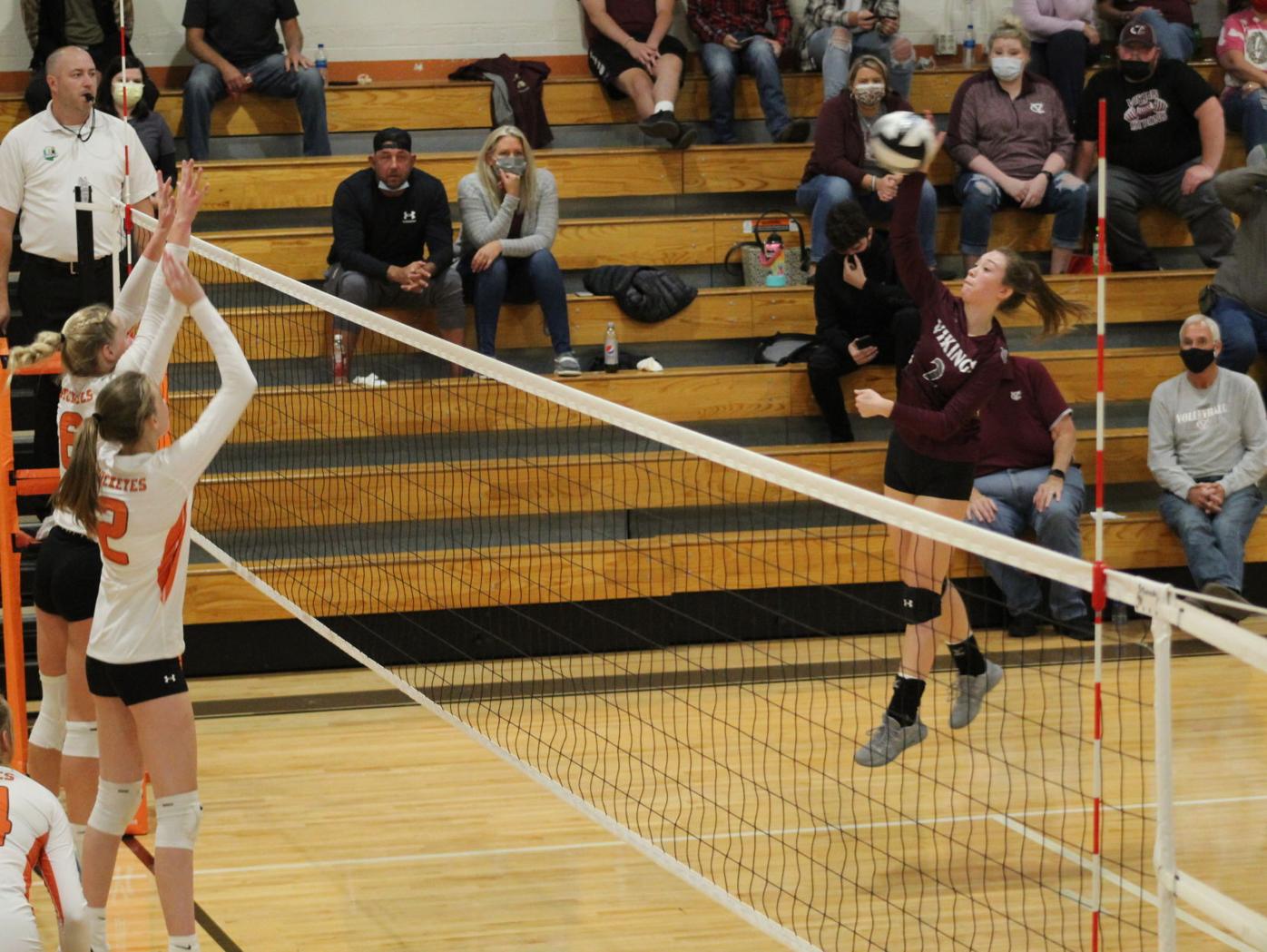 Vinton County’s Lacy Ward (right) goes up for a kill attempt against Nelsonville-York’s Mackenzie Hurd (6) and Chloe Lehman (2). Ward had 12 kills in the Vikings’ 3-0 win over the Buckeyes.

Vinton County’s Lacy Ward (right) goes up for a kill attempt against Nelsonville-York’s Mackenzie Hurd (6) and Chloe Lehman (2). Ward had 12 kills in the Vikings’ 3-0 win over the Buckeyes.

NELSONVILLE — The Nelsonville-York Buckeyes stood toe to toe with the Vinton County Vikings on Thursday.

However, when the Vikings needed a point or a big play, one of their standout players was more than ready to step to the plate.

Vinton County is now two games ahead of the rest of the field in the Tri-Valley Conference Ohio Division after the 25-23, 25-22, 25-22 victory and season sweep over the Buckeyes.

“I think we just came in with a lot more intensity tonight,” Vinton County coach Ashley Ervin said. “Obvioulsy, coming here last year, not playing well, we wanted to come here and get a win.”

The Buckeyes never trailed by more than four points at any point in the night, and scored at least 22 points in every set.

Nelsonville-York just wasn’t able to get over the hump against the two-time defending TVC-Ohio champions.

“Their experience I’m sure played a factor in the end,” Nelsonville-York coach Wayne Dicken said. “Our effort was fantastic tonight. I told them in the locker room after the game, it definitely wasn’t lack of effort as to why this game turned out.”

“I would have liked to have gotten a few more touches on the net against them,” Dicken said. “That would have helped our back row out a little bit, but they went to their bread and butter when times got tight and it worked out for them.”

The Buckeyes lost a four-set decision at Vinton County on Aug. 26. For all of the Vikings’ senior standouts, it was the return of a freshman that helped make a big difference in the rematch.

The younger Zinn has since returned to the lineup and the Vikings utilize a rotation with her as a setter, and Cameron moving to the outside.

It proved difficult to stop for the Buckeyes, as all of Cameron Zinn’s 14 kills came on assists from her sister Jordyn.

“Jordyn did a great job of executing tonight, getting Cameron the ball when we need her to in big plays,” Ervin said. “Cam just does a great job of putting the ball down. I looked at (assistant coach) Kevin (Gwinn) at one point and I was like, ‘how do you defend that?’ Cam gets her hand on the ball when she puts it down.”

Cameron Zinn is a four-year starter as a setter, but this season is the first time the Vikings have been able to use her as a hitter.

Dicken said the Buckeyes saw the rotation on film, but stopping it in live action proved to be a difficult task.

“She stayed very composed as a freshman in a tight game,” Dicken said of Jordyn Zinn. “We knew they were going to favor Cameron a lot in those sets. We tried to get our blocks out to get touches at the net, but Cameron Zinn is one of the best athletes in southeast Ohio.”

The Buckeyes (9-3, 4-2 TVC-Ohio) had a seven-match winning streak come to an end, as they hadn’t lost since the last meeting against Vinton County.

“The girls did a great job of doing what we talked about in every single rotation to be able to defend,” Ervin said. “Obviously, when Mackenzie is swinging, we have to plan for her. We did a great job of executing that and make sure that we did the little things right tonight.”

The Buckeyes were in every set, but perhaps no momentum swing was as important as the opening game.

Nelsonville-York led 23-20 after a Hurd kill, and enjoyed the upper hand for most of the set.

The Vikings found another gear when it mattered, starting with a Kiefer kill.

Smith got her first kill of the set to slice the deficit to 23-22, and the Buckeyes needed a timeout after Ward’s kill tied the score at 23-23.

The Vikings kept attacking, Smith’s kill giving them their first lead since it was 9-8. Ward had the final kill, completing the comeback and allowing Vinton County to steal the opening set.

“We had a lot of energy coming out and experience probably came into it a little bit,” Dicken said. “They have a lot of different weapons on the floor. They got the ball to them.”

The Vikings mostly played from ahead in the second set, but the score was tied at 19-19 after consecutive Vinton County errors.

Cameron Zinn also had Vinton County’s final two kills of the set, giving the Vikings control with the 25-22 win, and 2-0 lead in the match.

The Buckeyes had a large student section and a lot of energy inside Ben Wagner Gymnasium, but the Vikings remained calm in the tough environment.

“We knew it was going to be loud,” Ervin said. “It’s always loud when we come here. Small gym, it just echoes. We told them, you have to keep the intensity up from the start and make sure we keep that energy. We did a great job of that.”

The Vikings came out on top in another close set for the sweep. The third set was tied at 18-18 after a Lehman kill, and the Buckeyes were still within 22-21 after a Hurd kill.

Smith’s kill and Taylor Houdasheldt’s ace provided the Vikings with a 24-21 lead. Smith’s final kill gave Vinton County the 25-22 win, and the 3-0 sweep.

The Vikings are now 35-1 in the TVC-Ohio going back to the end of the 2018 season. The only loss was a five-set decision at Nelsonville-York last year, but the Vikings made sure history didn’t repeat itself.

With a two-game lead in the loss column on N-Y, Athens and Alexander, the Vikings are well on their way to a third straight TVC-Ohio title.

“They treated this like it was a league championship, coming here and making sure we got a win and taking care of business quickly,” Ervin said.

Dicken said the Buckeyes simply have to learn from Thursday’s defeat and continue to improve moving forward through the rest of the regular season.

“We’re focused on no more letdowns in the league and we’re going to really focus on having a very good regular season record going into the tournament draw and hopefully make a deep tournament run, deeper than last year hopefully,” Dicken said.