Vinton County’s Cameron Zinn finished with 51 assists, 18 digs and eight kills in the Vikings’ four-set victory over Alexander on Tuesday. 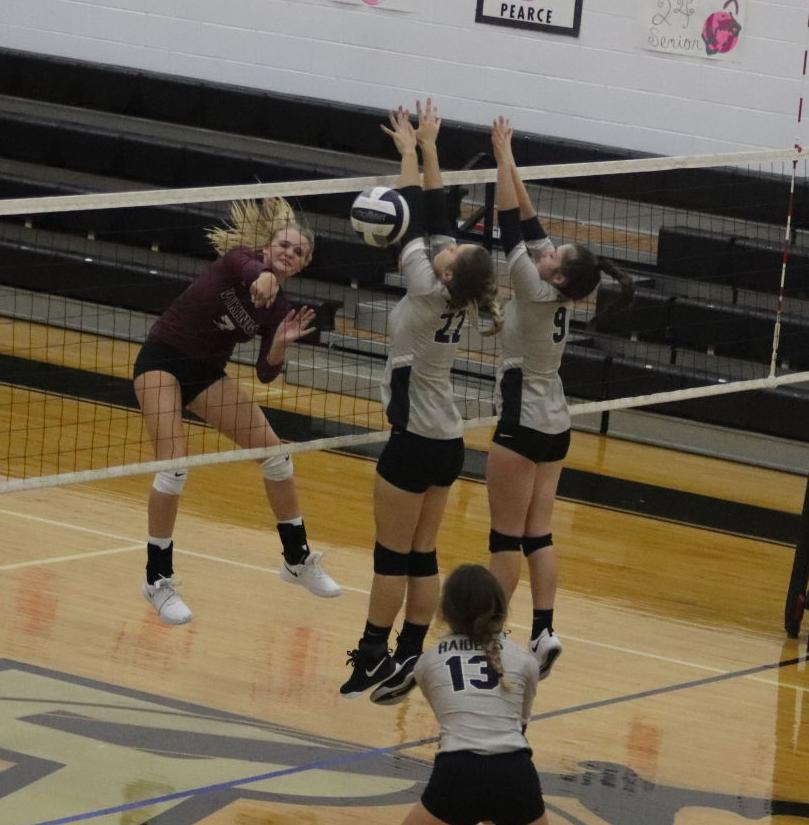 Vinton County’s Sydney Smith finished with a career-high 33 kills alongside 21 digs in the Vikings’ four-set victory over Alexander on Tuesday.

Vinton County’s Cameron Zinn finished with 51 assists, 18 digs and eight kills in the Vikings’ four-set victory over Alexander on Tuesday.

Vinton County’s Sydney Smith finished with a career-high 33 kills alongside 21 digs in the Vikings’ four-set victory over Alexander on Tuesday.

McARTHUR — Rivalries always bring out the best in a team. And if Tuesday was Vinton County at its peak level, teams should be scared.

Having already gone five sets with Alexander earlier this season, the Vikings took no prisoners and dispatched the Spartans again, this time in four sets, 25-21, 25-18, 20-25 and 25-10.

With the victory, the Vikings moved into sole first place atop the TVC with three games left in conference play.

It also marked four straight wins over the Spartans after suffering years of winless head-to-head matchups.

“It’s the rivalry and it’s like that in every single sport we play against them,” junior setter Cameron Zinn said. “No matter what the sport is; basketball, volleyball, it doesn’t matter. Plus it’s typically for the league somehow now so we always come out focused and ready. I’m so proud of us for getting this win.”

Alexander began with all the confidence in the world, never trailing in the early stages and maintaining a 13-11 lead. Vinton County tied the game 14-14 before Lacy Ward registered three kills to give the Vikings an 18-15 lead.

Despite a couple miscommunications and errors, the Vikings were able to shake those off and keep its flow. Ahead 23-21, the Spartans in turn committed two unforced errors to give the Vikings the first set.

Already with six kills in the opening set, Vinton County continued to feed Smith and she continued to send the ball screaming to the ground.

She opened the second set with five straight kills, part of her career-high 33 kills on the evening.

The Spartans later rallied to take the lead 10-6 before the Vikings pieced together a 8-2 run, capped by two more kills from Smith for a 14-12 lead.

“I was just doing whatever my team needed me to do from my play at the net to being in the back row,” Smith said. “I’ve been playing back row a lot more and I’m still adjusting. There were a few times I missed my spot, but I stayed with it. Playing back row forces me to have a short memory, which has really helped my game in the process.”

With Smith setting the pace, that opened things up for Zinn and Ward to strike at the net and keep the Spartans guessing.

Zinn served an ace, then kills from Ward, Smith and Zoey Kiefer pushed the lead up to 20-14 before closing out for the second set victory.

Not wanting to get swept, the Spartans came out with more energy and maintained a series of ties before taking the lead at 15-14.

After a Smith kill cut the lead down to 16-15, the Spartans were called for two unforced errors that swung all momentum despite it being just a three-point lead.

However, the damage was done and that gave Alexander enough of a push to close out the third set with the win.

“Back when we were at Alexander earlier this season, they beat us 25-10 in the fourth set,” Smith said. “We remembered that and told ourselves we weren’t going to a fifth set no matter what.”

With that determination on their minds, the Vikings left a trail of destruction behind as it jumped out to a quick 8-3 lead following an ace from Smith.

Later holding a 10-6 lead, the Vikings opened up a 10-2 run behind Smith and Zinn that overwhelmed Alexander and ultimately put the game on ice.

“We came out incredibly focused in the fourth set and we wanted to take the lead in the TVC,” Zinn said. “We began swinging at the ball and being aggressive even though we were tired. Our back row’s energy was through the roof and we played awesome.”

Zinn finished with 51 assists, giving her an even 500 on the season, alongside 18 digs and five kills for the Vikings.

Vinton County has a couple more games ahead before its showdown with Nelsonville-York, who handed the Vikings their only loss in TVC action earlier this year.

As long as both teams win out, that game with the Buckeyes will be for the TVC championship.

“”We didn’t play well against Nelsonville-York a few weeks ago and it was a shock to us when we lost,” Smith said. “But we’re still aiming to put another number on the banner so we knew we had to push really hard in this game. Now we have to finish strong.”