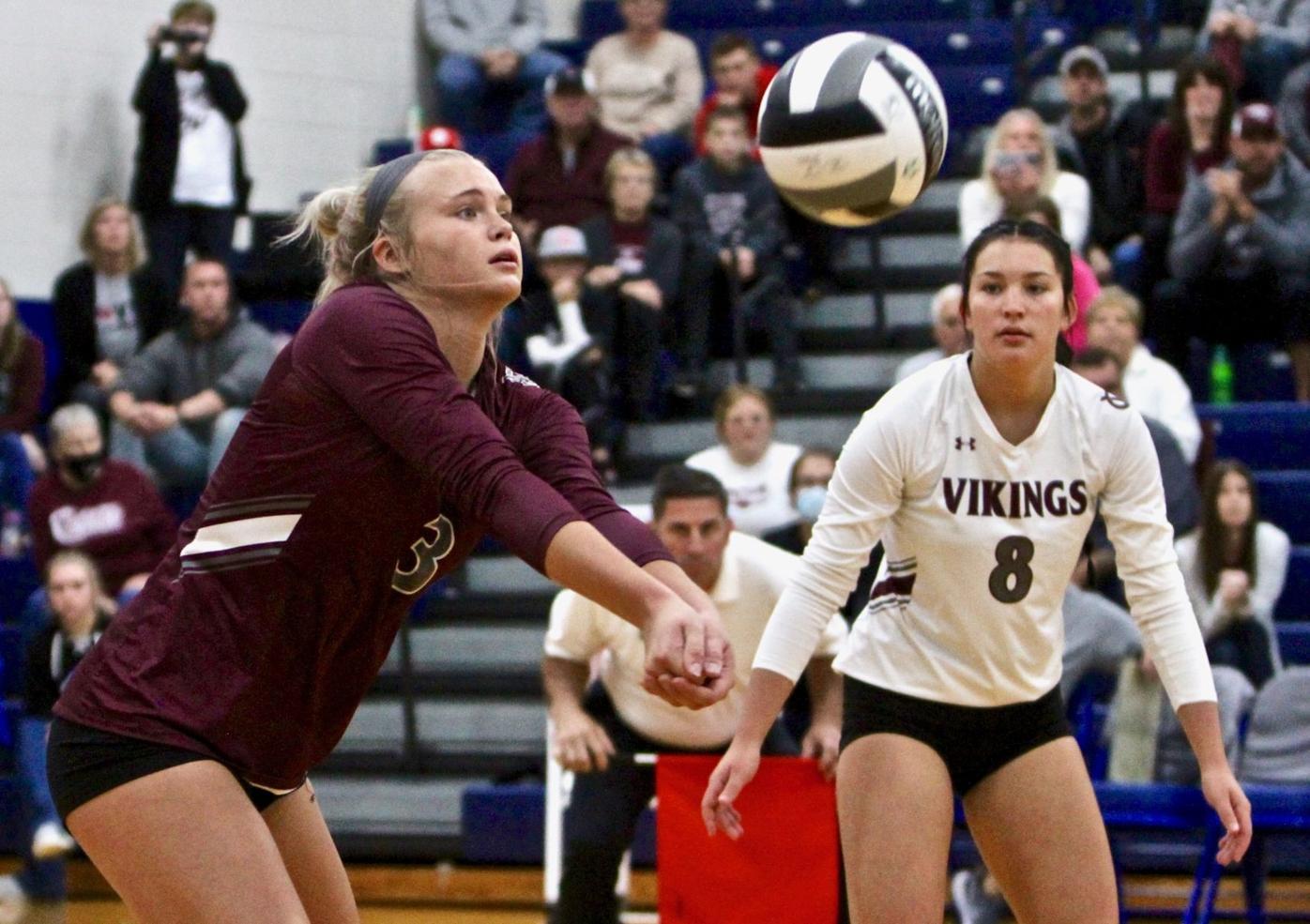 Vinton County’s Sydney Smith notches a dig in the Vikings’ four-set loss in a Division II district final against Sheridan on Saturday. 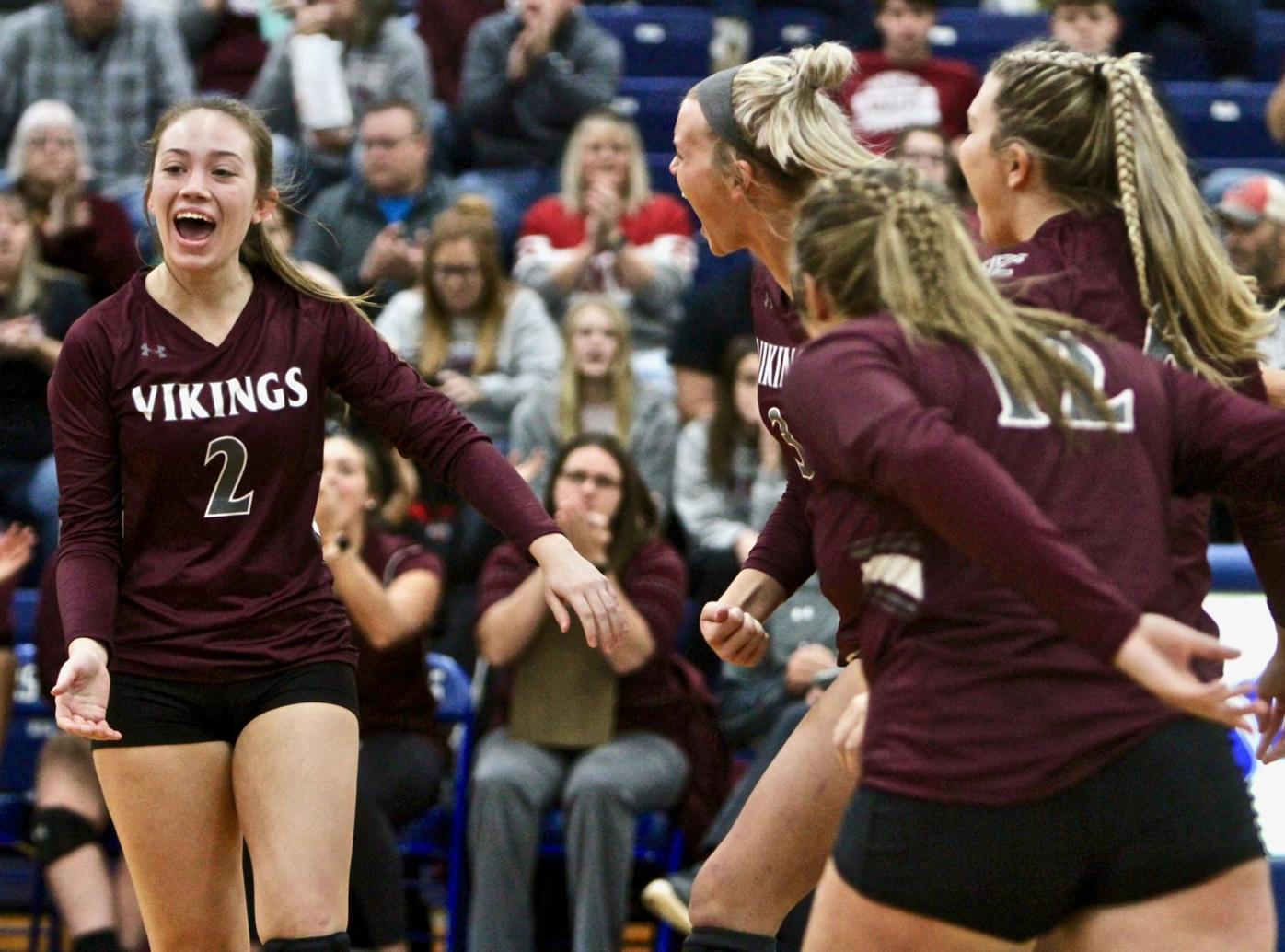 Vinton County’s Lacy Ward (left) celebrates after a kill with her teammates during the Vikings’ four-set loss in a Division II district final to Sheridan on Saturday.

Vinton County’s Sydney Smith notches a dig in the Vikings’ four-set loss in a Division II district final against Sheridan on Saturday.

Vinton County’s Lacy Ward (left) celebrates after a kill with her teammates during the Vikings’ four-set loss in a Division II district final to Sheridan on Saturday.

Multiple records broken and personal accomplishments achieved with the numbers on the banner to back it up.

It’s the greatest volleyball class to come through the program and the greatest team to ever do it without an argument.

Over the past four years, this senior class has blazed a trail of dominance unlike anything Vinton County has ever seen from its volleyball program.

It turned one of the lower tier programs into one that commanded respect, took on anyone and raised its own expectations.

“When this group were freshman, they looked at the banner in our gym and said, ‘We’re going to put numbers on there when we’re finished’, and they did just that,” Vinton County coach Ashley Ervin said. “What they’ve accomplished for our program is incredible and they’ve set the bar for what Vinton County volleyball can achieve if you work hard, put the time in and have the desire to be better.”

Their legacy was already cemented before the 2020 season started, it just continued to add while chasing that elusive district championship.

“I think our nerves just got the best of us early with being on this big of a stage, one that we haven’t been on in such a long time, if ever,” Ervin said. “To me it felt like our mindset was ‘This could be our last game,’ instead of thinking the opposite way. Sheridan had their fair share of mistakes, but we made a few more.”

With the game tied 9-9 after some early back-and-forth, the Generals jumped out on a 9-2 run behind Jamisyn Stinson to take a 18-11 lead.

The Vikings answered back with a 5-0 run with a pair of kills from Sydney Smith to cut the deficit down to 18-16. But a number of hitting errors and violations helped Sheridan end the set on a 7-1 run to close out for the win.

After a series of early ties to open the second set, Stinson and Ally Perkins guided the Generals ahead 13-8. Although the Vikings fought back to later cut the lead down to 18-14, Perkins and company were too much to handle as they took the second set win.

However, in between the second and third set, Vinton County suddenly just up and left the gym.

“I took the girls out in the hallway and told them, ‘We’re going back in as a completely different team,’” Ervin said. “We were going to show exactly who we are in this third set. We’re going to fight for every single point whether we win or lose, we’re coming out and going down swinging.”

And that’s exactly what they did.

With new energy and a stubbornness not to get sweep to end their season, the Vikings went on the attack as back-to-back aces from Jordyn Zinn put them ahead 9-5.

Sheridan later tied the set 12-12, but a serving error kept the Vikings ahead. Then Lacy Ward went back to the serving line and ripped a pair of aces as part of a 5-0 run for a 17-12 lead.

The Generals attempted a final push to regain momentum, but a number of errors and timely kills from Ward pushed the game to a fourth set.

“Everyone stepped up. Lacy served and hit the ball great. Sydney, Cam (Zinn), and Zoey (Kiefer) stayed aggressive at the net and the back row did a great job as well,” Ervin said. “We played like a team and made every point count. We fought.”

However, the Vikings dispensed most of their energy in the third, and Sheridan went back on the attack.

It jumped ahead 4-0 and never trailed in the set. Behind Faith Stinson, Jamisyn Stinson and Perkins, the trio continued to find the open spots on the floor and closed out for the win.

“We just didn’t have that same energy in the fourth that we had in the third,” Ervin said. “I think we relaxed just a little bit too much and we couldn’t find that switch again.”

“This is the hardest working team I’ve ever had, and I can’t thank them enough for everything they’ve done,” Ervin said. “I also can’t thank (Vinton County assistant coach) Kevin Gwynn enough. The minute he came along to coach us as well, everything changed. These girls have done so much and changed the outlook of this program. I’m just thankful.”