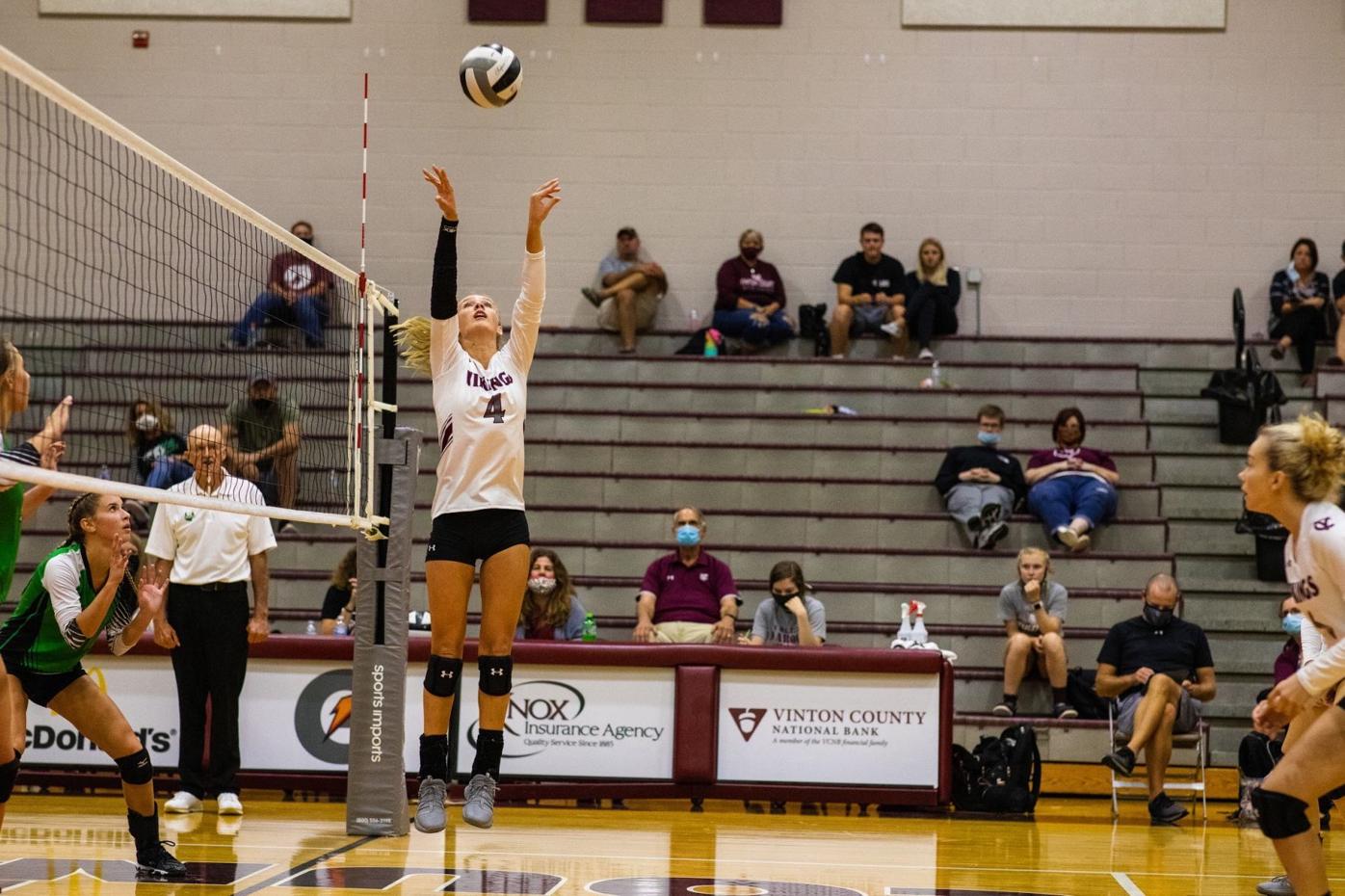 Vinton County’s Cameron Zinn sets the ball up for a kill attempt during the Vikings’ straight-set victory 25-20, 25-23, 25-11 over Huntington on Tuesday. 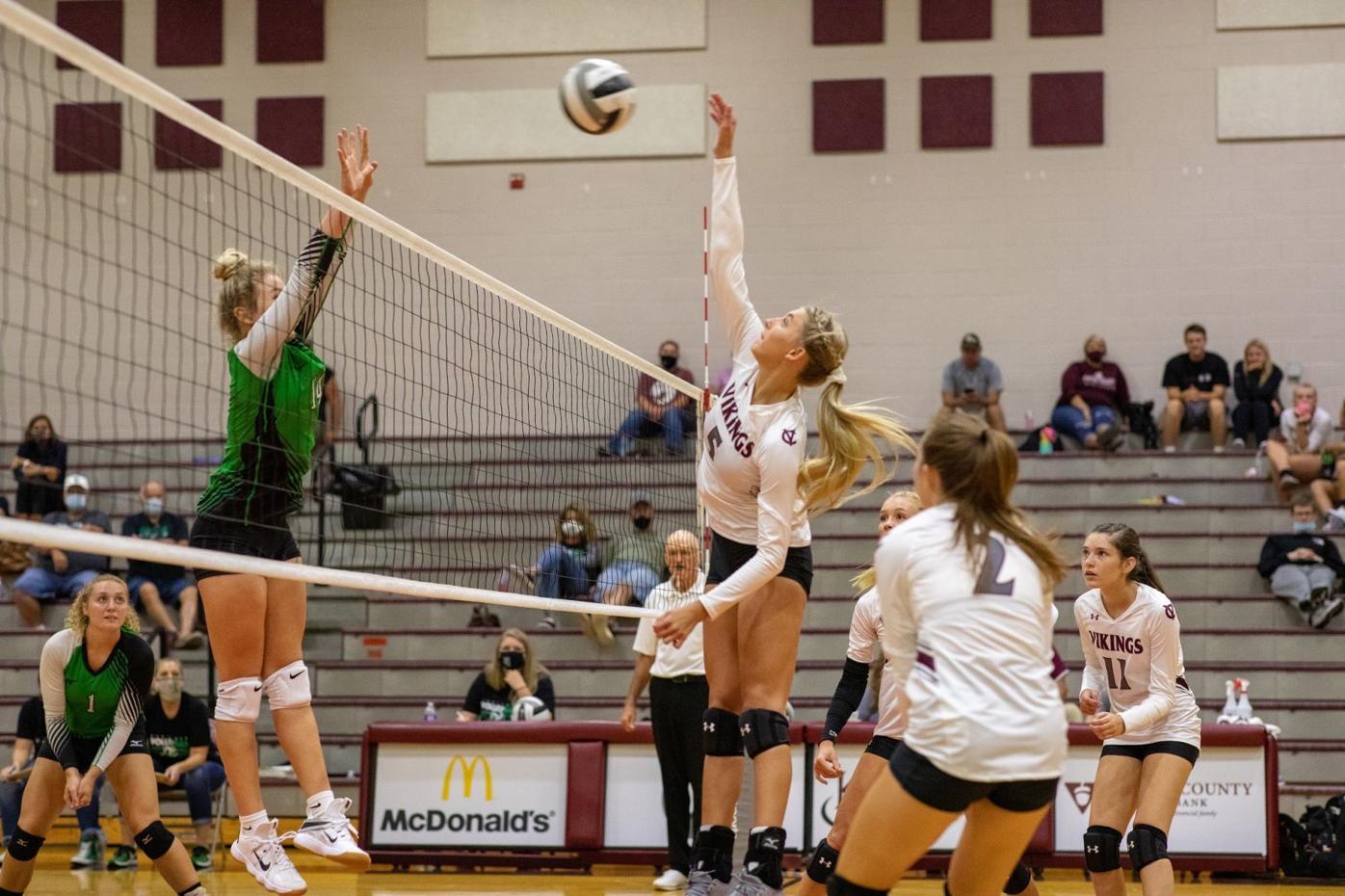 Vinton County’s Zoey Kiefer goes for the kill against Huntington’s Allison Bayse during the Vikings’ straight-set victory 25-20, 25-23, 25-11 over Huntington on Tuesday. 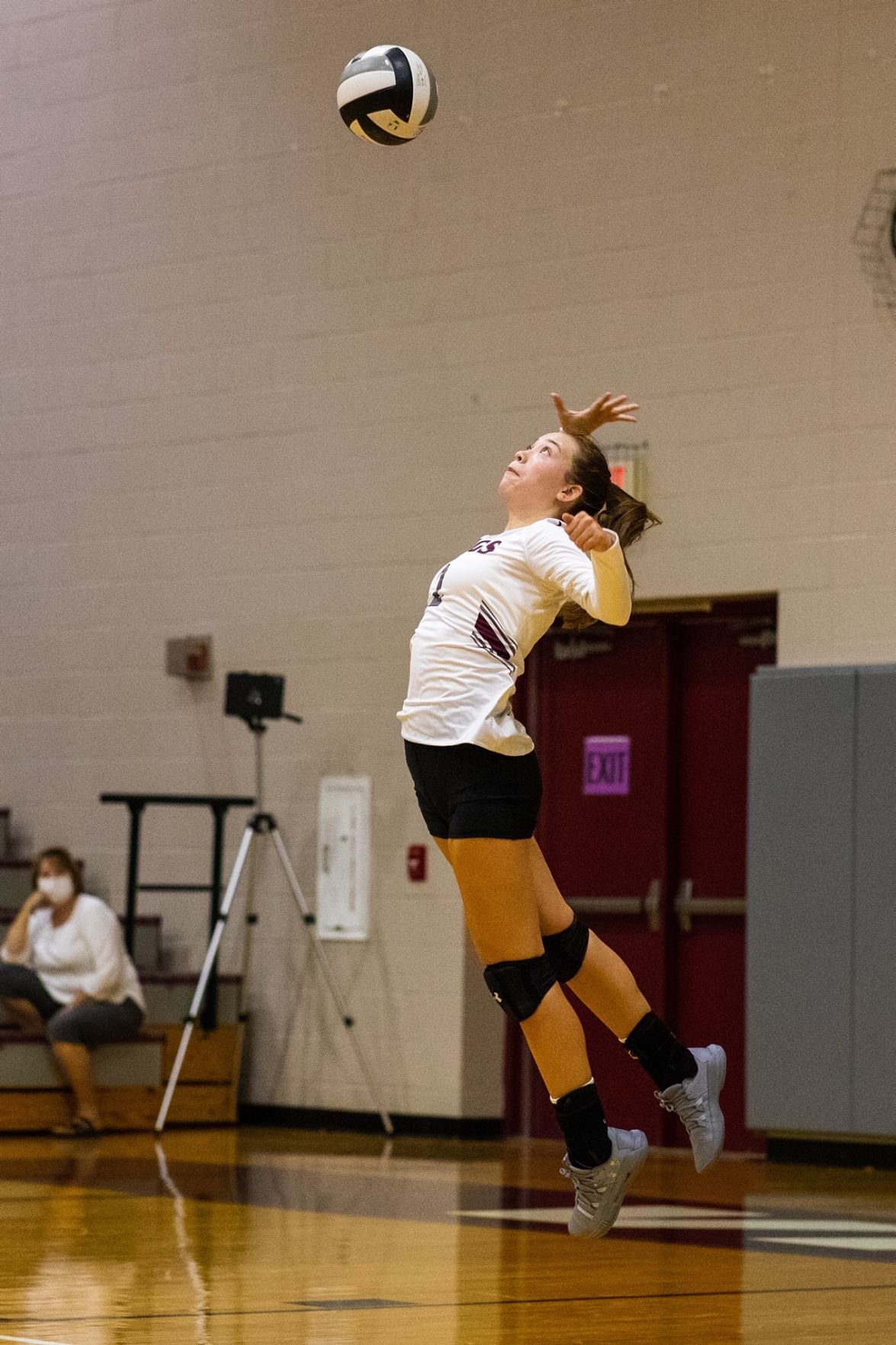 Vinton County’s Lacy Ward prepares to the serve the ball during the Vikings’ straight-set victory 25-20, 25-23, 25-11 over Huntington on Tuesday.

Vinton County’s Cameron Zinn sets the ball up for a kill attempt during the Vikings’ straight-set victory 25-20, 25-23, 25-11 over Huntington on Tuesday.

Vinton County’s Zoey Kiefer goes for the kill against Huntington’s Allison Bayse during the Vikings’ straight-set victory 25-20, 25-23, 25-11 over Huntington on Tuesday.

Vinton County’s Lacy Ward prepares to the serve the ball during the Vikings’ straight-set victory 25-20, 25-23, 25-11 over Huntington on Tuesday.

McARTHUR — Six sets up, and six sets down. It’s like last season all over again so far.

After cruising to a season-opening over Eastern, the Vikings had what appeared to be a much stiffer test on Tuesday with defending Division III district champion, Huntington.

The Vikings were aggressive, attacked the Huntsmen offensively and communicated well defensively, which in turn led to a straight-set victory 25-20, 25-23, 25-11.

“We definitely came out much better than we did against Eastern, but I chalk that up to having first game nerves,” Vinton County coach Ashley Ervin said. “It’s still really weird having no crowd noise, you can hear a pin drop at times but we continued to push and create our own energy. We had a few more serving errors than I would have liked, but we played aggressive and finished.”

Following a kill and block from Zoey Kiefer that gave Vinton County a 3-2 lead, it never trailed again.

Kills from Tristen Kirby, Lacy Ward and Sydney Smith push the lead to 9-5 before another sequence of three kills from Smith and one from Cameron Zinn upped it to 17-10.

Huntington made a little rally behind Katie Hirsch and Allison Bayse to cut the lead down to 22-20, but kills from Kiefer and Smith closed out the first set for the Vikings.

Now that Smith had warmed up at the net in the first set, it was time for her to showcase her skills at the serving line.

She wasted no time in doing so as she stepped back with the game tied 3-3 and served up four straight aces, followed by a kill from Ward for an 8-3 advantage.

“It was 3-3 when I stepped back to the line and I knew we needed to continue getting ahead,” Smith said. “Coach gave me a spot to hit, sometimes I hit it and sometimes I don’t. But I mixed it up with a couple floaters and some solid swings and it worked out.”

Vinton County continued its momentum and maintained its distance from Huntington as the led ballooned to 19-14 following a kill from Kiefer.

But the Huntsmen made another late run behind Carly Dyer and eventually tied the game at 22. Yet once again, a pair of kills from Smith and one from Ward closed out the second set.

“We had a couple breakdowns and allowed (Huntington) to come back,” Smith said. “It’s different not having any noise since we feed our crowd’s energy, but I knew that I had to push for my team down the stretch.”

That second set loss seemed to break Huntington, and the Vikings smelled blood in the water.

Emily Phillips served up back-to-back aces, followed by kills from Zinn, Smith and Ward for a double digit lead.

It was academic from that point as Ward spiked the final kill for the win.

“This was a much better night and a solid test for us this early in the season,” Ervin said. “It was good for us to work in some girls like Tristen Kirby and Emily Phillips to give them more reps and they played really well. Only thing for us is that we need to close out better than we did in the second set. We’ll get there.”

Last season, Kiefer’s role was significantly smaller as she was the backup middle hitter behind Maylea Huff.

Now it’s her time to shine in the middle. But there’s also added responsibilities that she didn’t have last season such as serving and playing in the back row at times.

“She’s improved so much from the player she was last season,” Ervin said. “Even though her timing was just a little off, she hit the ball really well. She’s seeing the ball and reading it much better at the net, but having her being able to serve and play in the back is a huge step forward. No way we would have had her do that last year, but she’s so much better than last year and she’s handled her responsibilities very well.”

Kiefer finished the night with six kills, three digs and an ace. While the numbers may not look eye-popping, when considering she didn’t serve or play in the back last season, it’s a step in the right direction.

“Losing Maylea this year and seeing how good of a job Zoey is doing as our middle is incredible,” Smith said. “Even going back to freshman year, she’s always been a phenomenal player. It’s a big deal that she’s stepped up the way she has, she’s playing confident and we have all the confidence in her.”

Smith finished with a team-high 12 kills and four aces alongside 11 digs to lead the Vikings.

Zinn added 26 assists, 11 digs and three kills, Lacy Ward had 11 kills and nine digs while Kerrigan Ward had 25 digs and a pair of aces.