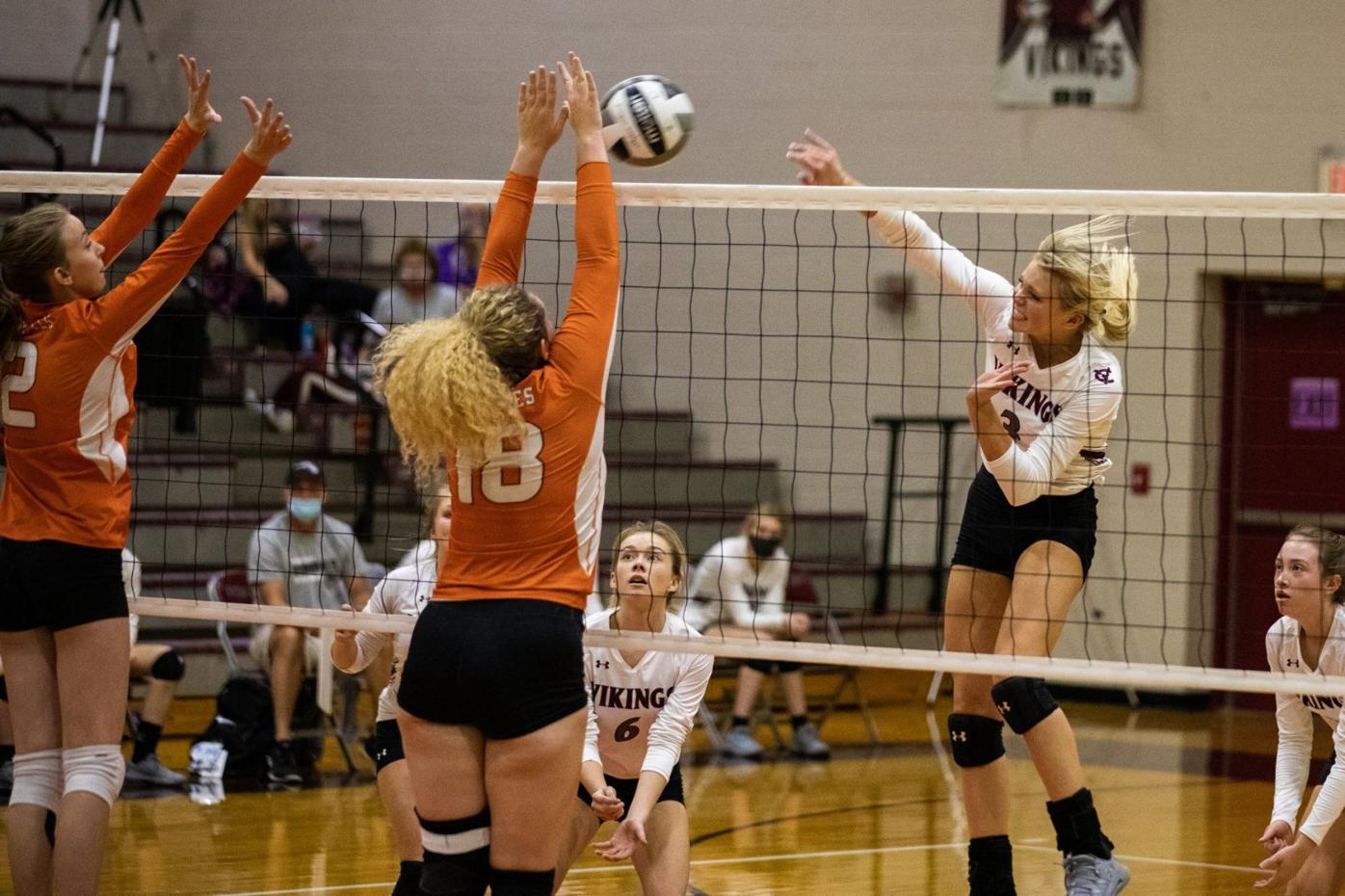 Vinton County’s Sydney Smith finished with 23 kills and 19 digs in the Vikings’ fiver-set victory over Gallia Academy in a Division II sectional final on Saturday. 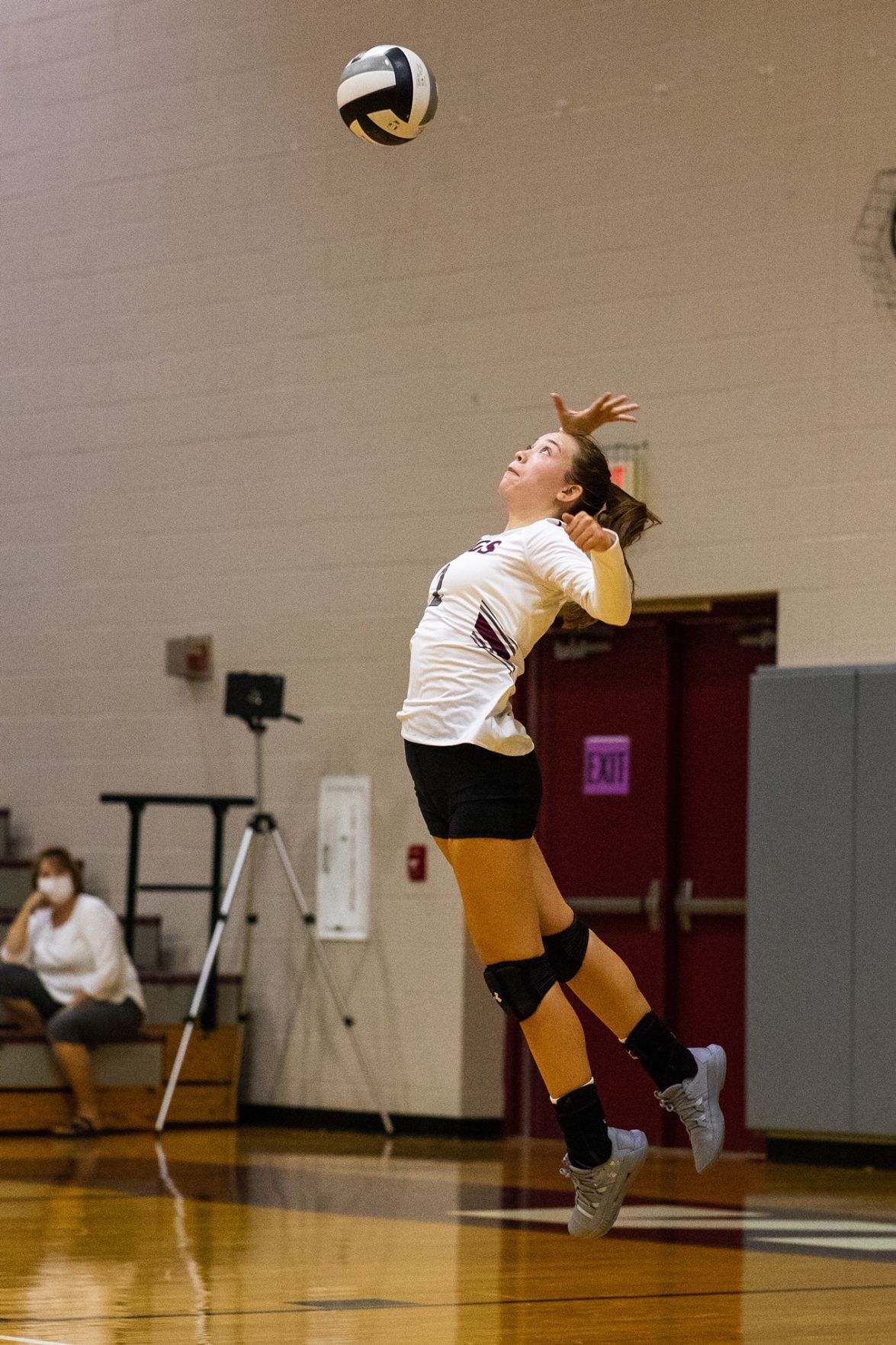 Vinton County’s Lacy Ward served up six aces alongside 15 kills in the Vikings’ five-set victory over Gallia Academy in a Division II sectional final on Saturday.

Vinton County’s Sydney Smith finished with 23 kills and 19 digs in the Vikings’ fiver-set victory over Gallia Academy in a Division II sectional final on Saturday.

Vinton County’s Lacy Ward served up six aces alongside 15 kills in the Vikings’ five-set victory over Gallia Academy in a Division II sectional final on Saturday.

Last year, it was Unioto who Vinton County knocked off in a Division II sectional final in five sets.

This year, in possibly more dramatic fashion, the Vikings rallied from down match point and rattled off three straight points for the unreal five-set victory over Gallia Academy 25-17, 19-25, 25-19, 18-25 and 17-15 on Saturday.

The victory claims back-to-back Division II sectional titles for the Vikings after their previous 20-year drought.

“Winning another sectional feels awesome. We haven’t had a good volleyball program ever and I think this shows the type of players that we are,” Vinton County’s Cameron Zinn said. “We’ve really turned this program around, focused in on our goals and it’s shown on the court.”

It took Vinton County some time to figure out its rhythm, but once it did in the first set, Gallia Academy had no answer.

That 6-0 run turned into a complete 10-3 run before Smith registered the final kill for the opening set win.

They jumped out to a 12-8 lead in the second set after Lacy Ward served up two of her game-high six aces during a 4-0 run.

However, Gallia Academy retaliated behind kills from Maddy Petro with a 9-2 run that flipped momentum and gave the Blue Angels a 19-17 lead.

They finished the set on a 6-2 run behind kills from Chanee Cremeens and Bailey Branette to tie the game 1-1.

“I think because of how we won the first set, we sort of just let up,” Zinn said. “Gallia is a good team and we knew they weren’t going to go away. But everything was off from our passing to our hitting and we couldn’t get it back together in time.

“They had a great gameplan and kept hitting the deep corners, which was a spot that we never caught up to.”

Vinton County never trailed in the third set, but there was a feeling that it wasn’t in complete control despite leading the whole way.

That feeling came to fruition in the fourth set as Gallia Academy never trailed, controlling leads of 9-4, 18-10 and 23-16 before pushing the game to a fifth set.

“We don’t very well on Saturday for whatever reason and we had way too many unforced errors; hitting, serving and communication as well,” Vinton County coach Ashley Ervin said. “It seemed like at times that we were waiting for someone to do something. Gallia is a really good team, and they played a great game. They found the holes in our defense and scrapped all night, they played hard.”

Gallia Academy jumped ahead 7-5 in the third set, but Vinton County rallied and a thunderous kill from Zinn put it ahead 13-10.

The Blue Angels answered back with a 5-1 run and had match point ahead 15-14, but a kill and ace from Smith followed by a kill from Lacy Ward sealed the deal for the Vikings.

“I saw that ball go up and I really wanted that last point, and I got it,” Ward said. “It was a tough game and Gallia played really good but we keep pushing, stayed aggressive and continued hitting. This is a great win for us.”

Zinn finished with 41 assists, 10 kills, eight digs and three aces for the Vikings, followed by 23 kills, 19 digs and a pair of aces from Smith.

Vinton County moves onto a Division II district semifinal and hits the road on Tuesday against top-seeded Sheridan in Thornville.

“We’re definitely the underdogs going into the game but we have to go in with the mentality that we have nothing to lose,” Zinn said. “They have a really good middle hitter, so we’ll make all the adjustments we need to. In the end, if we come in with a good attitude, swing hard and a positive mindset, we can win and advance.”