Sign Up
Log In
There are no services available.
You are the owner of this article.
Edit Article Add New Article
Home
News
Sports
e-Edition
Obituaries
Multimedia
Community
Reader Services
Marketplace
Ladies Night Out
1 of 2 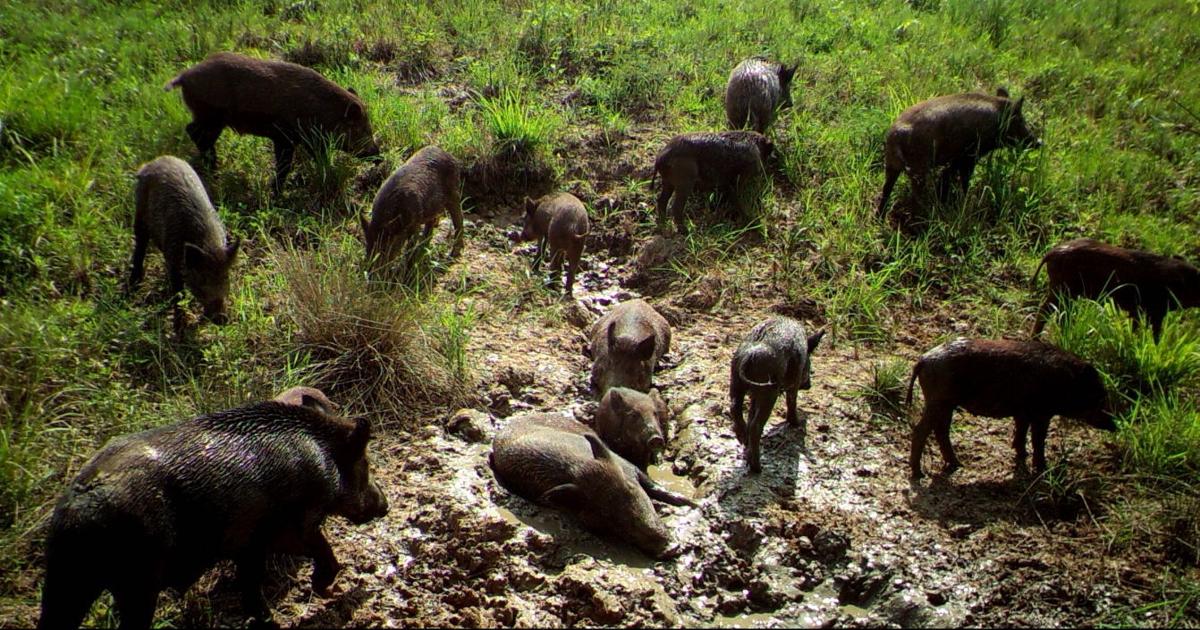 Feral swine wallow at a site in Vinton County in this photo taken last August. 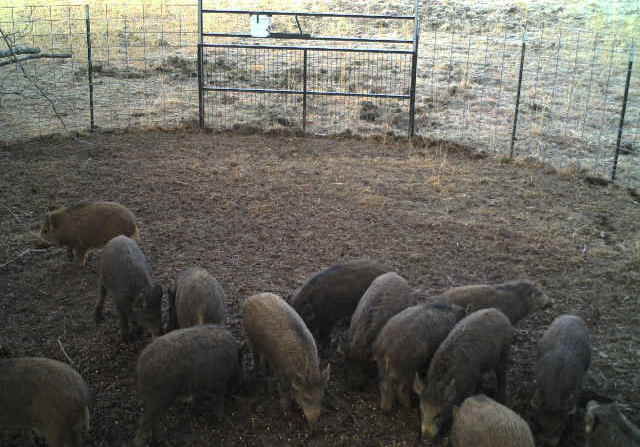 Feral hogs are caught in a trap in Vinton County in this photo shot in March of 2015.

Feral swine wallow at a site in Vinton County in this photo taken last August.

Feral hogs are caught in a trap in Vinton County in this photo shot in March of 2015.

A war of sorts is being waged in Vinton County, and the target can be elusive and can spread rapidly if left unchecked.

In the past year and a half, the U.S. Department of Agriculture has trapped and removed 393 feral swine from Vinton County. The agency’s Wildlife Services is fighting to keep the population of wild hogs in Vinton County from growing.

Why care about feral swine? Because they can be destructive to agriculture, property and natural resources.

“They use their snout to dig and root up soil (to find food). In some cases, their rooting can be as deep as 2 feet,” said Craig Hicks, the USDA’s Ohio feral swine coordinator. “This rooting behavior can leave a field or lawn looking like someone covered the entire property with a rototiller.”

Feral swine wallow in muddy springs and puddles, which can impact downstream water quality through bacterial contamination and depositing of silt.

“They are also highly destructive to corn,” Hicks said. “When swine feed in corn, it appears as though a steamroller went through.”

No one knows exactly how large the feral swine population is in Vinton County or how much damage is being done.

“And that’s what we verified, what we saw ourselves,” Hicks said. “There’s a lot of damage that occurs that we don’t hear about.”

Cody Hacker, a forester/wildlife specialist with the Vinton County Soil and Water Conservation District, said he personally hasn’t received a lot of complaints about damage. He did note that farmers may be dealing with problems themselves or contacting Hicks directly.

“Last year we had a few complaints about damage to row crops, particularly corn,” Hacker said. “I’ve seen rooting damage in yards and along trails.”

Vinton County is one of the first places feral swine have showed up in Ohio.

“From all the reports we’ve received over the years, it does appear that feral swine were first observed in Vinton and Gallia Counties, with sources dating back to the mid ‘80s,” Hicks said.

Hicks said feral swine in southeast Ohio resulted from breeding between domestic pigs that had gotten loose and Eurasian (also called Russian) boars. The boars may have been intentionally released for hunting, or escaped from preserves.

USDA Wildlife Services began small-scale feral swine elimination efforts in Vinton County in 2011, providing technical assistance to landowners who did their own trapping.

“As a result, USDA Wildlife Services assisted with the removal of roughly 80 swine,” Hicks said. “In 2014, federal initiatives allowed for the creation of the Ohio Feral Swine Damage and Disease Program. With increased staff and equipment, efforts ramped up in October of 2014.”

Hick said the USDA has worked with more than 80 property owners in Vinton County.

There have been 393 feral swine removed from Vinton County in the past year and a half, and 38 in other parts of Ohio. USDA Wildlife Services is currently conducting work in nine Ohio counties.

Once captured, the pigs are tested for diseases and euthanized.

“Feral swine have the ability to (but don’t necessarily do) carry 30 different diseases and 37 parasites that can affect people, pets and livestock,” Hicks said.

In order to stop a population of feral swine from growing, 75 percent must be eliminated, Hicks said. That has not yet been achieved in Vinton County, but Hicks said there has been a reduction or elimination of damage in areas where trapping has taken place.

Hicks said trapping is seen as the most effective swine-removal tool, rather than hunting, but he said hunters can play a vital role by reporting damage or signs of hogs.

Currently, 10 traps are in place in Vinton County.

The traps are monitored with cameras and triggered by smartphone. Boosters are used in areas with spotty cell phone service. Each time a camera is triggered, a text message is sent to Wildlife Services. Hicks explained that the traps (which use corn as bait) are monitored periodically until some swine activity is observed, then a team of four people continuously monitors the real-time images, taking turns during the night.

“The goal is not to trap some of the swine, but all of the swine in that group,” Hicks said.

There is no charge to landowners for the trapping.