Pictured was the second recycling drop-off location that was available on Harding Avenue across the street from Eddie Jones Park in Jackson. It was only there for a short time, but has since been removed due to abuse. 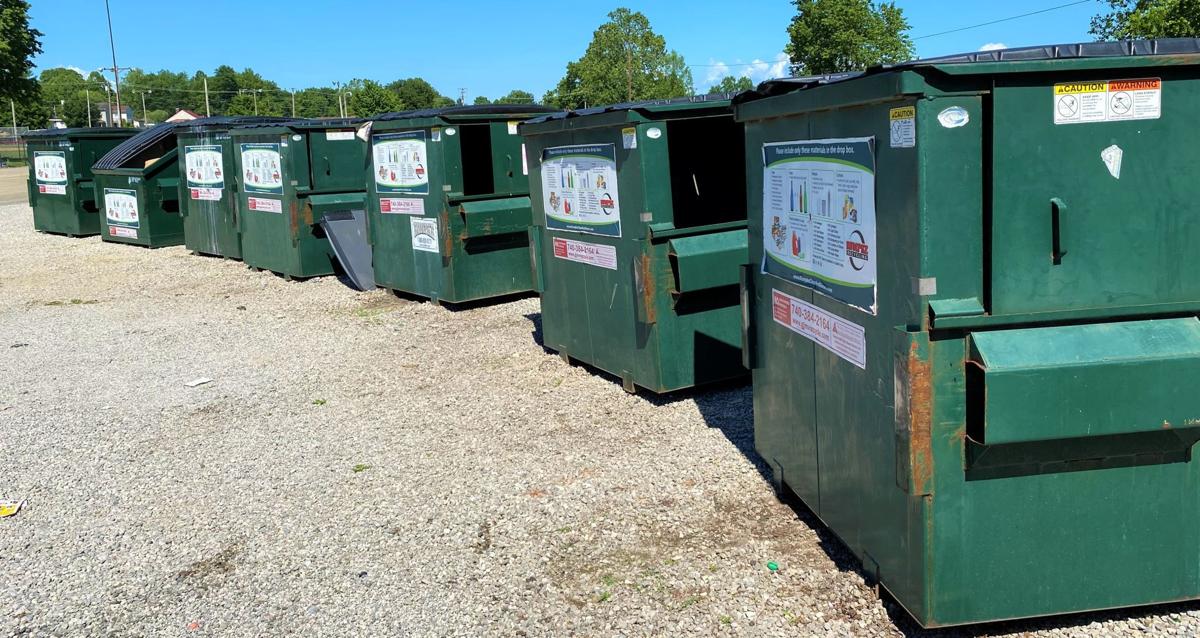 Pictured is the Jackson City Garage Recycling Drop-off Location. The location is next to 10 West Main Street in Jackson. Three more recycling bins were added recently bringing the total to seven.

Pictured was the second recycling drop-off location that was available on Harding Avenue across the street from Eddie Jones Park in Jackson. It was only there for a short time, but has since been removed due to abuse.

Pictured is the Jackson City Garage Recycling Drop-off Location. The location is next to 10 West Main Street in Jackson. Three more recycling bins were added recently bringing the total to seven.

JACKSON — Earlier this year, the City of Jackson discontinued its curbside recycling because of COVID-19 concerns.

The Courier met with Jackson Mayor Randy Evans on Thursday, June 25, to discuss the future of the curbside recycling program.

“Obviously, we haven’t brought it back yet, we are still debating the economic issues of bringing it back or not,” Evans told The Courier. “Ultimately, we will probably let the council make that decision, but we have not clarified a recommendation to them yet.”

When the first few cases of COVID-19 began to pop up locally, Evans announced that the program would be discontinued until further notice. This was done out of caution, to protect the safety of citizens and the city employees.

“We know recycling is a great thing to do, but business-wise it has become not smart, frankly,” stated Evans. “It’s a worldwide issue, not a City of Jackson issue.”

Evans added, “There is a very low demand for recycling products right now. The old days of selling recycling are over now, so not only does it cost us to run and staff the truck to run the recycling routes, it cost a lot more to get rid of the recycling material.”

Within the last year, the cost to the City of Jackson to recycle, according to Evans, has almost doubled.

“We now have to now take recycling to Chillicothe instead of Wellston,” explained Evans. “Now we are paying almost $60 a ton to dump it, instead of $30 some a ton.”

Evans said, “So, that’s why we aren’t in such a hurry to bring it back, we are looking at it, but we don’t see any trend where that is going to turn around, in fact, we think it will continue to get a lot more expensive. Recycling has changed and we are looking to change with it.”

The City of Jackson for a long time has had one location, featuring four bins to drop recycling in.

When the curbside recycling stopped in early April, Evans reached out to the Gallia, Jackson, Meigs, Vinton (GJMV) Solid Waste Management District to see about adding additional bins and a second location. A second location, featuring four bins was established on Harding Avenue, but it didn’t last long.

“We thought location wise that the spot on Harding Avenue was a good spot for access, and we owned that spot,” explained Evans. “The problem was people were abusing it so badly.”

Evans said, “Keep in mind, those bins aren’t ours, they are the Solid Waste Management Districts. They hire and schedule Rumpke to dump them. People on social media were getting all over us for not dumping them, but we don’t have any control over when they are dumped or how often they are dumped.”

Evans went on to say that a lot of the time when bins were overflowing it was material that wasn’t even recyclable, it was just garbage.

“We have had appliances, mattresses, etc. dumped at the Harding Avenue location,” explained Evans. “People were using it as a dumping site, so we had it moved.”

The Harding Avenue location ended on June 24. Three of the four bins were moved to next to the city garage. That makes a total of seven recycling bins at that location.

Evans explained that the location is better because there are cameras in use.

“The problem was the amount of abuse, not the amount of use,” explained Evans. “It’s sad. Those bins aren’t just for the City of Jackson, they are open to anyone.”

Evans said, “I didn’t want the abuse to go on, at the site on Harding Avenue, so we had them moved.”

According to the GJMV Solid Waste Management District, the city garage location is picked up on Monday and Thursday each week. They advised that if the bins are full, to not leave your recycling on the ground, come back another day.