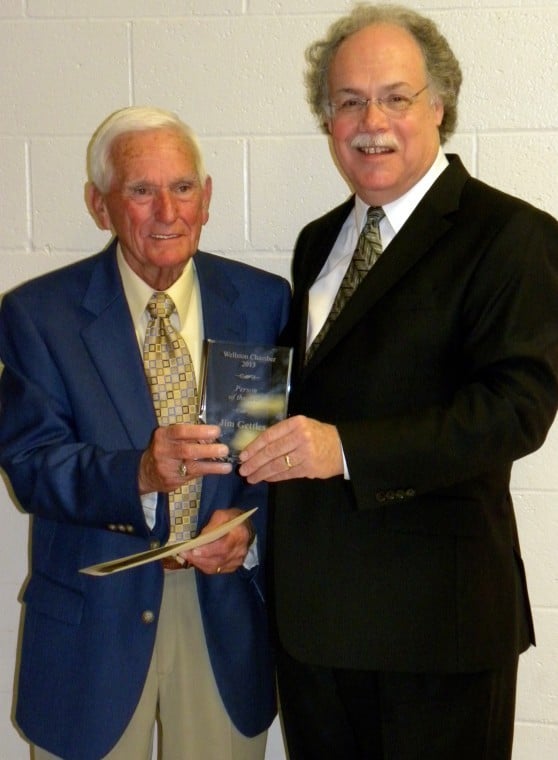 John Pelletier is pictured presenting Jim Gettles with the "Person of the Year" award. 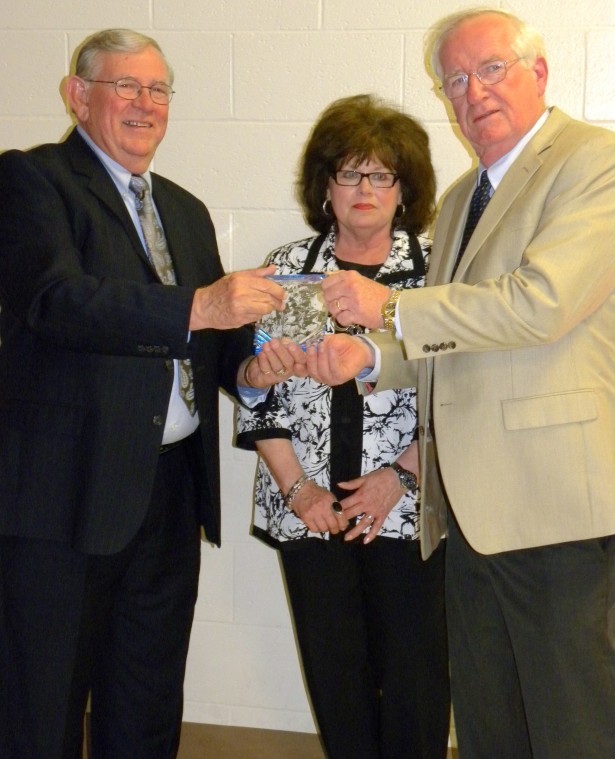 Jerry Ghearing is pictured presenting Dave and Henrietta Scharfenberger, of Ray’s Appliance and Furniture Store, with the Business of the Year award.

John Pelletier is pictured presenting Jim Gettles with the "Person of the Year" award.

Jerry Ghearing is pictured presenting Dave and Henrietta Scharfenberger, of Ray’s Appliance and Furniture Store, with the Business of the Year award.

The banquet drew a large crowd of folks who gathered for a dinner and an evening of the Chamber presenting many awards to people in the community.

The banquet got underway with a invocation given by John Pelletier. Folks then enjoyed a tasty dinner, which was catered by Becky Stabler of Queen Bee Catering. Prior to the banquet starting there was a social hour in which Musician Bart Wiseman provided entertainment. The lovely decorations at the banquet were done by Teri Canter of TLC Weddings and Parties with the help of Donna Summers Realty.

Following dinner was the presentation of awards to local community members and groups.

The first award to be given out was a Community Spirit Award and it was awarded to the Wellston Fire Department. Acting Wellston Fire Chief Ryan Pelletier accepted the award from Chamber Director Lori Silcott-Ousley on behalf of the Wellston Fire Department. "It's a honor for me to stand here this evening in front of all of you and accept this award on behalf of the entire fire department," stated Pelletier. "I thank you very much for this  award and we are very humble for it."

Next, Silcott-Ousley presented another Community Spirit Award to Shannon Weber, who was accompanied by Grant Plummer. Weber accepted the award on behalf of the Wellston Historical Association. "Grant is the youngest member we have and we are proud of his involvement," said Weber. "All of the activities of the historical association would not be possible without the involvement of Barbara McKinniss and John Carey. They both deserve a lot of credit also."

The Make Wellston Beautiful Committee was next to be honored with a Community Spirit Award. Chairman Tami Phillips accepted the award on behalf of the committee. "If it was not for the community, we would not have people to help us," said Phillips. "So, I want to thank all of you."

The last Community Spirit Award was awarded to The Wellston High School Band. The award was presented to WHS Band Director Josh Willett and Field Commander Arie Hensley. "We had a tremendous year this year, topped off with a Superior (I) Rating at the OMEA State Marching Band Finals," said Willett. "This year we had a really great support staff, excellent leaders like Arie and we had 20 seniors in the high school band this year, but I give the students all the credit for the success."

After the four Community Spirit Awards were handed out there were three more awards to be presented.

The Community Investment Award went to Dave's Custom Butchering. Dave Sprague and his daughter, Suzie (Sprague) Darling, accepted the award, which was presented by Silcott-Ousley. The business started in 1885 and was owned by the Scott Family. Dave purchased the business in 1983 and the business became known as "Dave's Custom Butchering". In 2012 is when Dave added the additional called, "Dave's Deli". Sprague stated, "Thank you all very much... this is a big surprise to me."

The next award was the Business of the Year award, which was presented by Wellston businessman Jerry Ghearing. The award went to Ray’s Appliance and Furniture Store. Owners Dave and Henrietta Scharfenberger accepted the award from Ghearing. Ray's was applauded for staying in business after their Second Street business was destroyed by fire in July of last year. The new business is located on First Street in Wellston. "We want to thank the Chamber for giving us this award and we want to thank the fire department," said Dave. "We are back in business again, people are coming back and we hope to hang in there a little while longer."

The last award of the evening was "Person of the Year" in which the Wellston Area Chamber of Commerce named businessman Jim Gettles as its Person of the Year for 2013. John Pelletier had the honor of introducing Gettles by outlining his accomplishments over the years. "I am so honored, proud and privileged to be named the Chamber's Person of the Year," said Gettles. "I want to thank all of you for being here and enjoy the evening."

After Gettles had completed his comments the banquet concluded with Wellston Mayor Connie Pelletier presented him with a proclamation from Ohio Governor John Kasich and Lt. Governor Mary Taylor recognizing him for being named "Person of the Year".